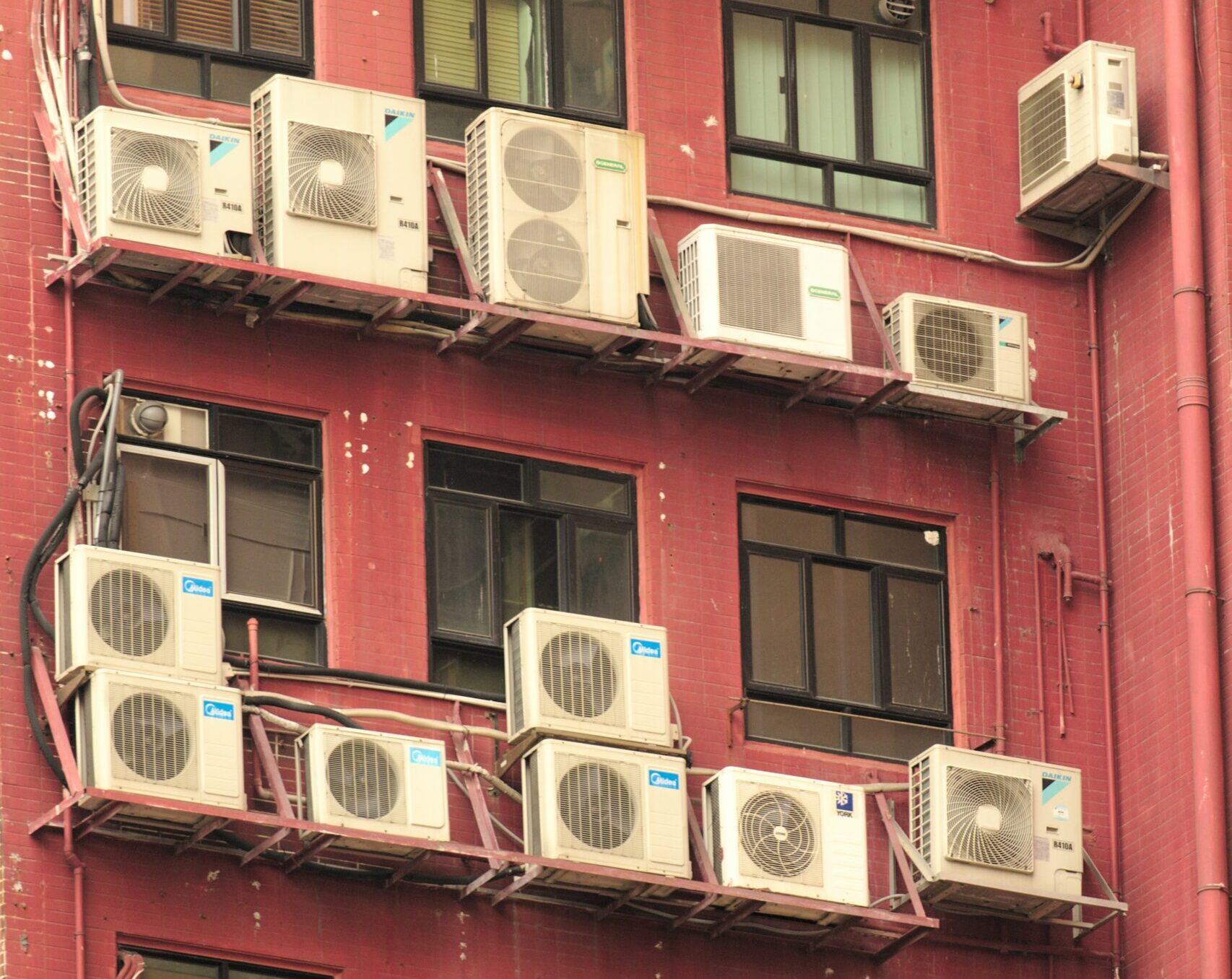 As summer temperatures soar, millions of Indians depend upon air conditioners (ACs). This is not an exaggeration: the number of AC owners in India went up from 2 million in 2006, to 5 million by 2011. By 2030, a staggering 200 million Indians may own an AC. After all, India’s increasingly affluent middle class ranks first amongst lower-middle income countries in the world; this means that more Indians can now afford to buy air conditioners.

Fanning the flames of an increasing AC demand are the rising temperatures across the subcontinent. Since 2004, India has recorded 11 of its warmest years. This may worsen. Before the end of the century, India’s average summer temperature is expected to increase by 4.4℃, while the intensity of heat waves is set to increase by 3 to 4 times. Then, in this scorching country, an inevitable pattern emerges—more people can now afford to buy cheap ACs, which are unfortunately, also the least energy efficient amongst available air conditioners.

Why does energy efficiency matter? Let’s put this into perspective.

According to a 2018 report by the International Energy Association, “the global stock of air conditioners in buildings will grow to 5.6 billion by 2050, up from 1.6 billion today.” For this projection to come true, 10 new ACs will have be sold every second around the world for the next 30 years. That’s a lot of ACs—which means that their energy requirements are huge too.

For example, between 2017-18 India utilised 130 million tonnes of refrigeration for cooling purposes. Over the next 16 years, this figure is expected to grow by 8 times—which would result in a colossal emission of greenhouse gases. Add to this the danger of ozone depleting hydrofluorocarbons that refrigerants in ACs contain. Together, this is a deadly combination and a grave threat to climate change mitigation efforts.

“Most of those people who are now buying ACs in developing countries like India are first-time buyers. So, they do not yet have the experience to see the long-term economic benefits of [buying] more energy efficient but expensive ACs,” says Manjeet Singh, Associate Fellow at The Energy Resources Institute (TERI).

So, if more and more Indians are set to buy ACs, how can the more energy efficient variants become popular? The answers lie in first understanding Indian consumer behaviour.

Inside the AC Shopper’s Mind

For a consumer, the easiest and clearest indication of their appliance’s energy efficiency is the star rating system developed by the Bureau of Energy Efficiency (BEE). The system gives appliances a rating between 1 to 5 stars, where a 5-star rating refers to the highest energy efficiency for that appliance. Despite this information, the most popular AC choice, according to a 2021 study based on Delhi’s AC usage, was a mid-efficiency 3-star rating unit. Unsurprisingly, the higher costs of more energy efficient ACs were a deterrent for consumers. “India is currently importing about 30% of its ACs. Imports of components like compressors and electronic sensors which are then assembled domestically is even higher. Most of the imported units [which are also more expensive] are the more efficient ACs,” says Singh.

This year, an increase in import costs is also reflecting in the prices of major AC manufacturers such as Voltas, Daikin, LG, and Blue Star, who have raised their prices by 5 to 8 percent. This has a direct repercussion on what type of ACs get sold more: a higher price means that the demand for low-end, affordable products, like 3 or 4-star ACs, will go up instead of for 5-star ones.

While high costs act as a deterrent, efficiency is still not the next top factor that consumers base their decisions on. Less than 5% of the households in the 2021 study reported energy efficiency as a determining reason for what kind of AC to buy. Other features like having a remote, or a heating mode, is what seems to excite consumers more.

Apart from insights into what consumers buy, understanding how the AC gets used after being bought is equally important in the energy efficiency conversation. A 2016 Centre for Science and Environment study noted that if consumers lower a 5-star rated AC’s internal temperature to 20℃ or lower, its performance becomes equivalent to a 2 or 3-star rated AC. That’s not all. Its performance is also impacted by outside temperatures: if it is 40℃ to 50℃ outside, the 5-star rated AC will perform worse than a 2 or even a 1-star rated AC.

For a country like India with hot summers, this is almost inevitable with the current technology available. Take for instance, New Delhi, which has already witnessed a 40-degree day in March this year, with the end of April also seeing soaring temperatures.

So, since the current AC consumer market is plagued with high costs and gaps in consumer awareness, what can be done to move consumers towards more sustainable air conditioning decisions?

The best solution would be to have a low-cost, highly energy efficient air conditioner on the market, which sustains its performance even in high outside temperatures. In 2019, Energy Efficiency Services Ltd (EESL)—a joint venture under the Ministry of Power—did just that with Voltas. They began selling a 7-star rated AC at a relatively affordable ₹41,300—cheaper than many 5-star models—which maintains its efficiency even when the outside temperature hovers at 52℃.

This was made possible through bulk procurement of units—EESL floated a tender to procure 1,00,000 super-efficient ACs, resulting in a steep fall in market prices. The winning bidder was required to extend support right from designing and manufacturing the AC to supplying it, installing it, and providing post-sales operation and monitoring. This was not EESL’s first such experiment; in 2016, it conducted a similar bulk procurement with energy saving 9-watt LED bulbs, which brought the retail price of each bulb down from ₹550 per piece in 2015 to ₹65 in 2016.

“Bringing affordability to the customer has to be a priority for India, where we will see a very high demand for ACs in the coming years. Maybe attracting foreign investment to develop more such technologies would accelerate this process,” says Singh. As of 2019, China and Thailand are the leading exporters of heating, ventilation, air conditioning and refrigeration (HVACR) components in the world.

Now that efficient ACs are making their way into the market, what is the best way to inform consumers about the technicalities of energy efficiency?

If the BEE’s star-rating is your first guess to how customers understand energy efficiency, then the 2020 CAG report might make you take another guess. According to the audit, almost 4 lakh units of nine models of room air conditioners had been marketed until December 2015, yet had failed label verification tests for energy efficiency. In 2017-18, over 23,000 ACs had been marketed without really being as efficient as their labels suggested.

“If the energy efficiency that the product vouches for is actually not being met, then it would lead to a loss of consumer trust,” explains Sumedha Malaviya, Manager of the Energy Program at the World Resource Institute-India. “To prevent that from happening, standards-setting bodies like the BEE need to ensure that mislabelled or unlabelled products do not enter local markets’’. Some experts even recommend that the BEE carry out its efficiency tests in multiple higher temperature ranges and declare the results on their product label—all in a bid to improve transparency for the consumer.

Additionally, Sumedha gives an example of nudging consumers towards energy efficient decisions. In Bengaluru, TIDE, a grassroots NGO has experimented with home energy reports under a program called VidyutRakshaka, which are usually delivered by email or post to the consumer. “This report splits the household’s electricity usage appliance wise, compares their usage with their neighbours’ to initiate a sense of competition of usage reduction, and even sets goals of managing demand for the upcoming months,” she explains.

If by 2030 India does manage to improve the average efficiency of its AC stock by 30% of 2015 levels, it would be a big deal—our CO2 emissions could reduce by as much as 10% of what is expected from India’s Nationally Determined Contribution to the Paris Agreement.

In fact, such reductions would also be in line with the targets of the India Cooling Action Plan (ICAP), a 2019 Central government plan that provides a 20 year outline towards sustainable cooling. India is the first country in the world to develop such a plan.

But, some aspects are still missing from this conversation. “We are currently focusing a lot on increasing the sale of energy efficient ACs. But a crucial aspect is still lacking—that is, reducing the demand for cooling through affordable retrofits in houses,” says Sumedha.

From construction material to design elements, architecture can make a huge difference in thermal comforts. For instance, in a high temperature city, while large, glass windows may look aesthetically pleasing, they can also trap more heat. Under such circumstances, double-glazed windows can retain the house’s coolness. Integrating these passive cooling techniques into upcoming buildings can tap into a large potential of energy efficiency in India, where 75% of buildings expected to exist by 2030 have not been built yet.

“Under the ICAP, coordination with other ministries and departments can be advantageous, especially for low-income housing projects under the government which can integrate passive cooling as well,” says Sumedha.

Already constructed buildings can still benefit from cooling techniques. Cool roofs, for example, is a simple and cost-effective solution that involves applying white limewash to rooftops—this reflects sunlight and absorbs less heat. Gujarat’s capital Ahmedabad witnessed such a pilot project in 2018, wherein the Municipal Corporation painted the rooftops of about 2% of the city’s lower income households. It was found that cool roofs could help lower temperatures by 2-5 degrees, as compared to traditional roofs. An exciting new invention of the “whitest white” paint that reflects 98.1% of sunlight also presents a similar opportunity that can work “similar to air conditioner, but without the use of electricity.”

“While a narrow segment of builders adopt passive cooling techniques proactively, there are many builders, especially in tier 2 and tier 3 cities who do not. Instead, they are building especially for ACs, wherein they construct a space for the outside unit of the [split] AC. Many hold a wrong perception that it’s cheaper to build unsustainably, whereas a lot of studies now show that these costs can be recovered easily,” explains Sumedha.

Sustainable cooling conversations are slowly gaining pace in policy and market arenas, but they should mould easily with new developments. “What falls under the definition of ‘efficient’ today might not be the same tomorrow, and it’s important for definitions and star-ratings to get updated as more technological innovation happens,” says TERI’s Singh. Be it technology, architecture, or cost, innovative ways have to be sought to make this knowledge accurately available to those who can make use of it the most—the consumers.