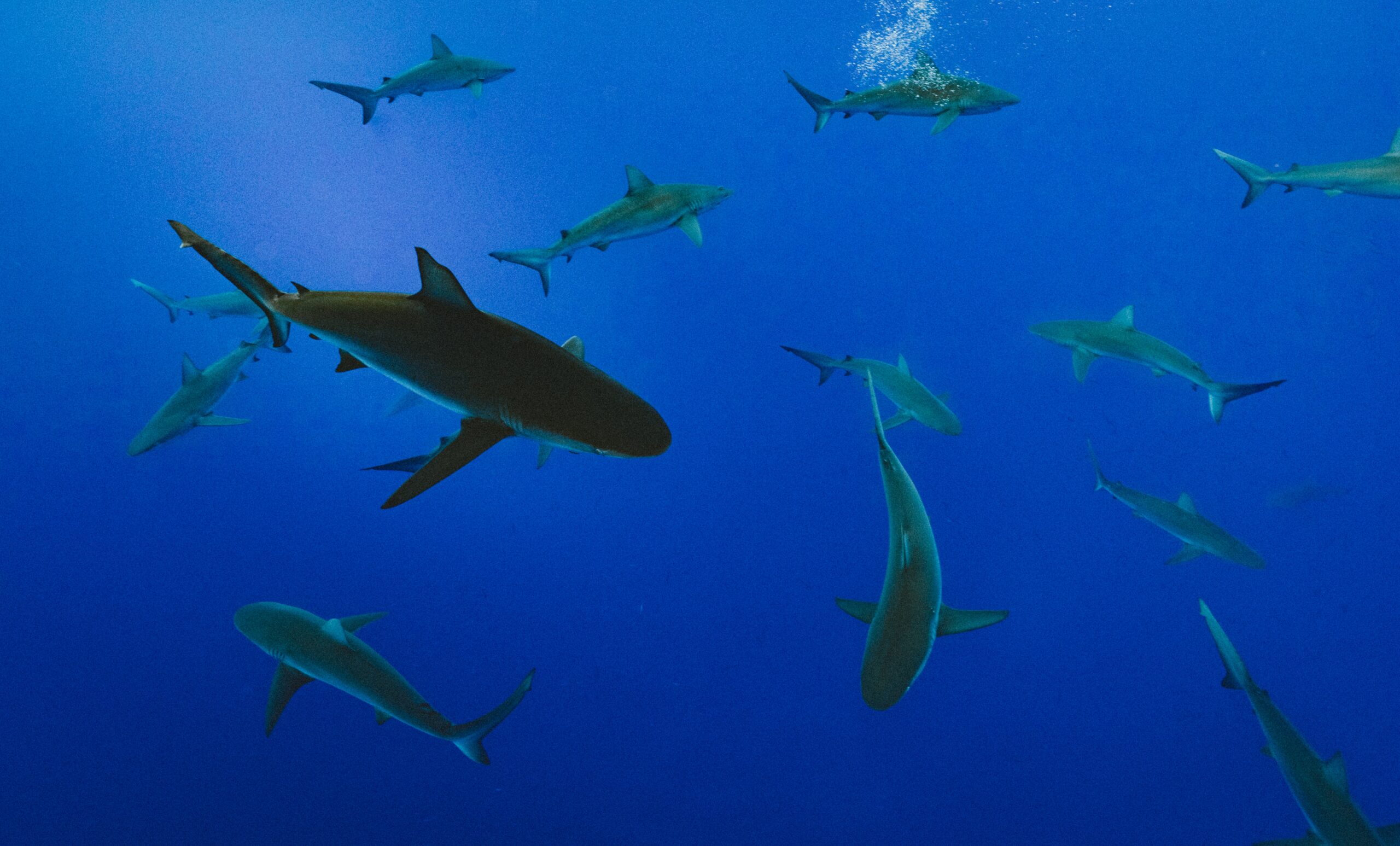 There’s a group of animals that have roamed the earth for millions of years, surviving various mass extinctions throughout history. They’ve been around even before trees existed!

They’re elasmobranchs—a group comprising sharks, rays, and skates. They constitute a diverse group of animals (~1060 species) that occupy open oceans, coastal waters, coral reefs, deep seas, sea-beds, and even freshwaters. Elasmobranchs are ancient—the earliest of sharks are said to have evolved 450 million years ago, with rays and skates appearing years later around 201 million years ago. For contrast: we Homo sapiens did not appear until 2,00,000 to 3,00,000 years ago!

The current diversity of elasmobranchs—especially of sharks—is a consequence of the end-Cretaceous mass extinction, which took place about 65 million years ago. This is the famous event that is said to have been the undoing of non-avian dinosaurs, one that also wiped out about 75% of the earth’s living organisms.

But, how did elasmobranchs survive the end-Cretaceous mass extinction?

Studies suggest it could be a combination of their deep-sea habitats and diverse feeding habits. Although many of the larger sharks perished, it was the deep-water, small-bodied ones that survived by feeding on smaller organisms.

However, in spite of this successful evolutionary history in the world’s oceans over millions of years, the survival of elasmobranchs at large is now under threat. Unlike previous mass extinctions that occurred over thousands and millions of years, the present changes—which are mostly anthropogenic—have occurred within decades, leaving them little time or opportunity to adapt.

Along with fisheries, factors like coastal development, pollution, habitat destruction, and climate change pose a major threat to their survival. Global elasmobranch landings have declined by almost 20% since 2003—which suggests declining populations in the world’s seas and oceans. This is mostly attributed to fishing pressures with the updated IUCN Red List now increasing the percentage of threatened elasmobranchs to 33%. Many species have been exploited to the extent that they are in need of protection.

However, with 40% of the species considered data deficient, it is clear that only a few studies have been carried out over the years on the biology and ecology of these species. Although efforts to collect more data have increased over the past few years—with new species being discovered every year—they have not been enough to fill the gaps in our knowledge. This limited understanding makes it challenging to determine their resilience to various pressures, further complicating conservation planning and implementation.

Given an elasmobranch’s way of life, wherein they occupy deep-sea habitats and swim the high seas (which are not part of any country’s territorial waters) spotting and studying them in the wild is a challenging task. This is further exacerbated by the fact that many species are morphologically similar, making identification a difficult task.

As a result, little is known about their population status, reproductive strategies, and the physical and physiological changes associated with anthropogenic activities. Even their ecology and migration routes are poorly known.

For example, for the elusive manta and devil ray species, their wide range of habitats around the world has made it difficult to understand their population trends. When basic information on their location and movement patterns remain unknown, it becomes challenging to implement conservation measures.

The situation is not altogether grim though—findings of certain studies have already paved the way for effective population management plans. Population growth rate studies from Australia of two Australian shark species that are commonly harvested for consumption—the school shark (Galeorhinus galeus) and the gummy shark (Mustelus antarcticus)—are cases in point.

Studies showed that gummy sharks were more capable of supporting a sustainable fishery, as they increased in numbers quickly due to their high productivity. On the other hand, the number of school sharks declined even when sustainable fishing practices were deployed due to their slow rates of growth and reproduction. And so, the study suggested that fisheries could focus on fishing gummy sharks while reducing the number of school sharks caught, resulting in a more sustainable utilisation of the group.

However, even when specific traits of elasmobranchs are known, they are poorly publicised which only hampers conservation outcomes. For the spadenose shark (Scoliodon laticaudus)—one of the most common shark species in Indian waters—feeding behaviours change with the season. Just before and during the monsoon months, they have a preference for prawns, while after the monsoon, there is a slight dominance of fish, such as mackerel, oil sardine, silverbellies, anchovies, soles, sciaenids, and small ribbon, in their diets. The type of bait used for fishing as well as the dominance of certain fish in nets can attract different species of sharks more than others. Unbeknownst to some fishers, this can increase the vulnerability of certain species being captured including the spadenose shark, which is now categorised as Near Threatened on the IUCN Red List.

You May Also Like: From Predators to Prey: The Disappearance of Sharks From Indian Waters

The various respiratory strategies employed by elasmobranch species are relatively well understood—but, even then they have been rarely used to protect the group from fishing pressures.

Some species of sharks and rays like the blacktip shark (Carcharhinus limbatus) and devil ray (Mobula sp.) swim with their mouths open, forcing water into the cavity and over their gills. This type of respiration is found to be the most efficient, having evolved with the fast, active swimming nature of these species—but, this adaptation has now become somewhat of a setback. When captured in fishing gear, these animals are unable to swim and breathe, and are therefore prone to drowning rapidly. While blacktip sharks have been categorised as Near Threatened, the devil ray is classified as Endangered as per the IUCN Red List. In fact, all species of devil and manta rays also fall under Appendix II of the Convention on International Trade in Endangered Species (CITES), which recognises that the trade of these species should be controlled.

On the other hand, species such as the bamboo shark (Chiloscyllium sp.) and spotted eagle ray (Aetobatus narinari) have spiracles that actively pump water over the gills, allowing stationary respiration, making them much more resilient to fisheries.

This understanding helps develop conservation strategies that can make fishing practices more targeted and sustainable. Conservation measures could include release following capture—wherein certain threatened species are released back into the water when caught. Or, they could prevent the capture of certain species altogether, which will ensure that endangered species face fewer threats—such as injuries from fishing gear—that can increase their chances of mortality.

Several environmental and anthropogenic factors can trigger biological changes in elasmobranchs, especially in the event of capture. A few studies have suggested the incidence of capture-induced abortion, premature birth, and changes in body compounds that can lead to mortality even after release from the fishing gear.

Another such trigger is the fight response to the event of capture, which releases stressors such as lactate which can increase the mortality rate of species, and is found in high levels in dead individuals.

Scalloped hammerhead sharks (Sphyrna lewini, commonly found in Indian waters) are known to show a high fight response upon being trapped in nets, as compared to bull sharks (Carcharhinus leucas). However, a study by the Dakshin Foundation and the Centre for Ecological Sciences at the Indian Institute of Science found that bull sharks, generally considered to be highly resilient, may be more vulnerable to mortality than scalloped hammerheads. This was because most of the individuals of the two species surveyed in the study were juveniles, which tend to be more sensitive to the trigger responses than adults. Why is this important? At the study site, these were two of the juvenile species commonly encountered. So, the age or life stage of an animal is also an important factor that needs to be considered when identifying conservation issues and solutions.

Looking to the future for solutions

There are several other impacts of fishing on elasmobranchs and studies are still being carried out to understand them. This is a complex issue that needs an overall understanding of the biological, environmental, and fisheries factors that vary with species and their associated habitat and environmental conditions. Only then can we develop strategies that ensure fishing practices are not damaging to those species. For example, knowledge and restoration of habitat used by smalltooth sawfish (Pristis pectinata) in the Everglades National Park, USA was instrumental in preventing species extinction.

It is also important to communicate research findings to stakeholders, inform the general public about them, and design and mobilise resources for better studies all around the world. Such strategies are crucial because elasmobranchs form important components of the seas, oceans, and estuaries, irrespective of national and international boundaries. These measures, when implemented at scale without biases, can go a long way in conserving elasmobranchs, many of which need immediate protection, as well as guide management for sustainable fisheries where appropriate.