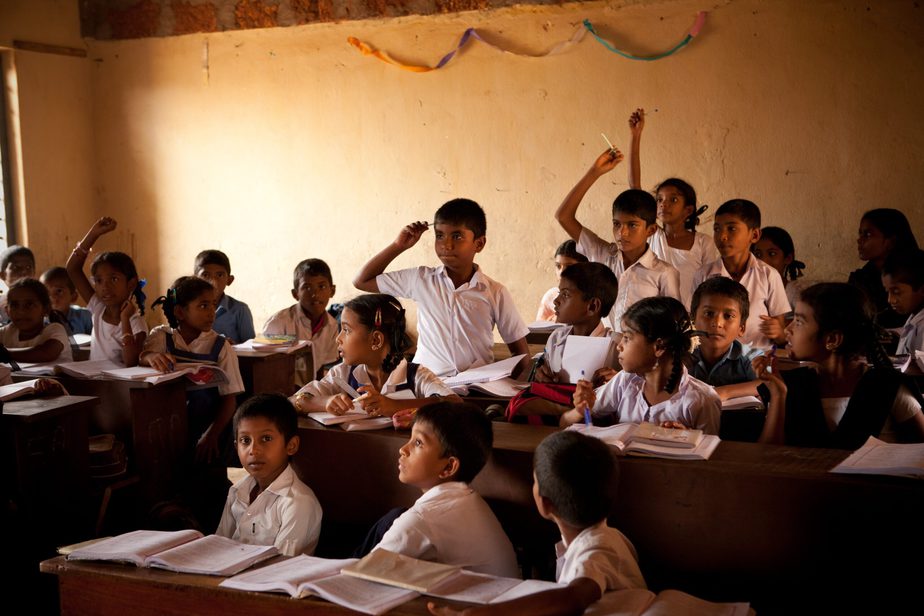 This article is the second instalment of a two-part series on why learning traps ensnare children in cycles of poor academic performances, and what can be done to dissolve them. Click here to read part one.

The Culprit: An Over-ambitious Education System

Can stretched-thin parents & burdened teachers take all of the blame? When trying to explain education traps, an oft-circulated meme comes to mind.

Given the knowledge and marks-oriented nature of our education system, in our classrooms we end up with a crop of students, say 20-25% of the class, fully invested in by teachers and able to crack exam after exam. The rest of the students, pass through the system without gaining meaningful skills. For example, in the “Negative consequences of an overambitious curriculum”, a study by two economists Lant Pritchett and Amanda Beatty, it was estimated that four out of five Indian children who enter a grade unable to read, leave at the end of the school year without gaining any reading skills. They further concluded that 7 out of 8 students make no skill-based progress in an academic year. This is a colossal waste of the resources allocated to ‘educate’ India’s millions of students.

Paradoxically though, Pritchett and Beatty concluded that in classes where the curriculum is less heavy and better paced, more student-learning takes place!

Perhaps the question to ask then is not why students are behind in their grade levels, but why the curricula races ahead of the abilities of students. Take the Grade 7 Bal Bharti English textbook used by the Maharashtra state education board. It prescribes the poem “The Brook” by Lord Alfred Tennyson–a 12 stanza piece of literature filled with figurative meanings, and archaic Irish words. The Grade 7 students who are going to read this poem and attempt to understand it, are probably at a Grade 3 reading level. On the other hand, the very same poem only appears in the Grade 9 English CBSE textbook.

The RTE and its no-detention policy: A roadblock to education?

Yet, there are multiple, perhaps well-intentioned, policies embedded in our education infrastructure that only perpetuate Learning Traps. The no-detention system, for example, mandated under the Right To Education Act (RTE) exacerbates the trap by pushing ahead students even when they’re not ready. Students suddenly find themselves much below the minimum learning level of the grade they’re promoted to, leaving them to fester in the classroom education trap.

So, whereas in a remediation class the student might be able to slowly develop their skills, in a standard class beyond their learning levels, they end up ignored. The high Student Classroom Ratios (SCR), or the ratio of the number of students per classroom in a given academic year, makes it easy for these students to slip through the net.

All an automatic-pass system does is reinforce the message that it’s not important to learn, but to be at a certain educational level by a certain age.

This might be a good strategy to show high gross enrolment ratios (GERs) in reports – especially seeing as parents of failing students are loath to spend on an extra year of fees – but it does little to incentivize cognitive skills or providing real education.

How deep does the Rabbit Hole go?

It’s easy to think that learning traps only affect a few students. But given the high SCRs and the staggered effects of grade level gaps, in reality, a substantial portion of the students currently operate way below their learning level.

The proof is in the pudding. The 2018 Annual State of Education Report (ASER) which tracks basic skills for students across schools in India concludes that about 50% of students in Grade V and 30% in Grade VIII cannot read a Grade II level English text. This means that 3 in 10 students who have persisted through 8 long years of schooling cannot read a single short paragraph! The tests involve testing VII grade students at a Grade II basic skill level, however, if the students were tested at their own grade-level, or even at one or two grades lower than that, the numbers would most likely be much higher. The long-term effects of such neglect, a direct result of an education trap, have lifelong repercussions on students. 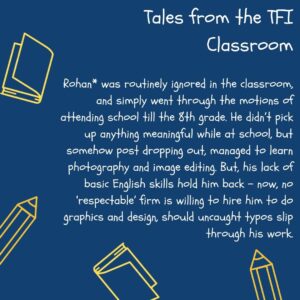 Yet, Rohan could have gained so much more professionally had his schooling been up to the mark, for good schooling pays back in dividends. For example, a 2005 study by NCAER shows that a primary graduate earns 21% more than an illiterate person, a high school graduate about 2 times more, and a college graduate 4 times more. Abhijit Banerjee and Esther Duflo, based on their research in various developing countries, state that even a few years of good schooling shows benefits in terms of lower pregnancy rates and child mortality one generation down–that is, non-monetary benefits accrue as well.

If we’re to account for these ancillary effects, there are some benefits from just going to school and gaining exposure in a class. But given the unimaginative ways in which our education system is structured, a majority of our learners are trapped in the classrooms they are in. Much like Eklavya was forsaken by his caste in the Mahabharata, several of our students today are as well, because of their perceived inability to play a rigged game.

To quote Bernie Sanders, we need an education system that works for the average student, not just the 10%.

All hope isn’t lost though. There are multiple examples from around the world where schools have successfully tackled learning traps in classrooms.

KIPP charter schools, started in low-income communities in the USA, were founded on the premise of focusing on the ‘left-behind’ children from disadvantaged families. Some salient features of their model are placing high expectations on their students, individual student attention through home visits by teachers, a commitment letter of investment from the child’s parents, and longer teaching hours to provide remediation classes as well as extracurricular opportunities to all students. Students of KIPP schools are encouraged to call their teachers, even late at night, if they need help with homework. If nothing else, that sends a message that the teacher cares and believes.

Closer to home, Indian NGO Pratham has conducted successful remediation efforts in Bihar and UP. Pratham held special summer programs for teachers and their students, in which the teacher’s main work was not to focus on catering to the ‘toppers,’ but on those left behind. These are indeed the methods that successful teachers follow. Shubhada Pendharkar, the Headmistress of Pune Police School for over a decade now says, “We start remedial classes early so they are ready for 1st Grade. We use assembly time, pop-up time, and after-school classes to help our students from as early as upper primary school. This ensures that students don’t graduate to a higher grade without having mastered the basic minimum skills they should have.”

All these programs take students back to the basics of education, showing them that learning is worthwhile and useful. More importantly, they instil a sense of belief in neglected students, imparting in them the confidence that they too are worth teaching. These two learnings are critical to remember when educating India’s children: they are what we need to resuscitate our education system and meet its overwhelming targets.

Click here to read more about life inside India’s classrooms and schools, curated by The Bastion and Teach For India’s teaching staff, under “Jolly Good Fellows”.

*Names have been changed to maintain anonymity.