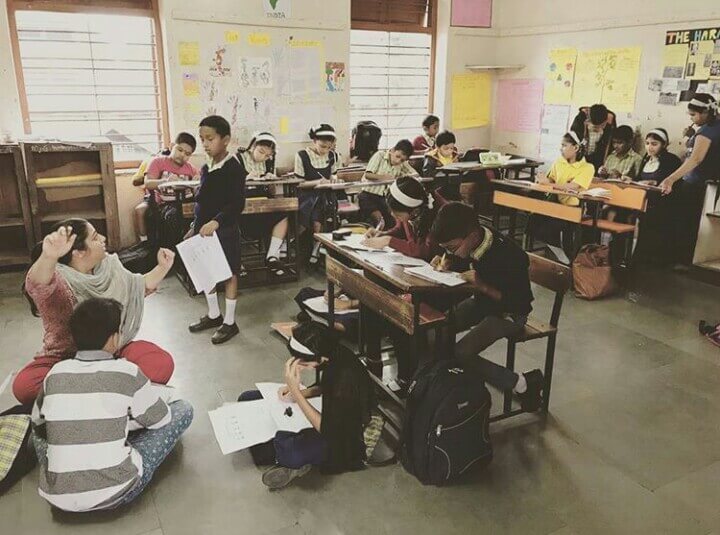 The No-Detention Policy (NDP) came into existence due to an alarming increase in the rate of school dropouts, and to ensure universal enrolment in schools across India. It falls under Section 16 of the Right to Education (RTE) Act 2009 that states “No child admitted in a school shall be held back in any class or expelled from school till the completion of elementary education”. According to the NDP, students studying in classes 1 to 8 cannot be detained in a particular class, even if their performance or attendance does not meet the required standard necessary to be promoted to the next class.

At a meeting organized by the Central Advisory Board of Education (CABE) in 2015, CABE requested all states and union territories to share their views on the no-detention policy. This was a result of CABE’s Sub-Committee findings that assessed the implementation of Continuous and Comprehensive Evaluation (CCE) over a period of 2 years, as an important aspect of the no-detention policy.

CCE focuses on assessing the children by non-learning factors such as social, personality, attitudes and values displayed. In 2012, the Ministry for Human Resource Development (MHRD) also clarified that the CCE is “a procedure that will be non-threatening, releases the child from the fear and trauma of failure and enables the teacher to pay individual attention to the child’s learning and performance”. A misconstrued understanding of “no-detention” being the same as “no-assessment” and a lack of resources needed to successfully implement CCE devalues the potential of this holistic programme. Not surprisingly, 23 out of 29 states suggested a modification to the existent no-detention policy, due to a decrease in learning outcomes over the years of the RTE’s implementation.

The number of students failing their class 9 exams has increased significantly over the past few years.

Similarly, 27% of students enrolled in class 9 in government schools in Chandigarh failed their final examinations. Such an increase in the number of students failing in class 9 has been attributed to the government’s no-detention policy, which according to those against this policy, is the root cause of falling learning outcomes.

To NDP or not to NDP

People in support of revoking the NDP believe that automatically promoting students to the next class reduces the incentive to study and perform well. This also impacts pedagogy; teachers are less motivated to teach and carry out comprehensive evaluations of students at various stages in class, as the outcome is predetermined. It seems that no fear of detention, is demotivating for both, students and teachers.

Another argument against the no-detention policy is that the policy does not differentiate between students that perform well academically and those who don’t. It is assumed that all students learn at the same pace and because of high Pupil-Teacher ratios (PTR), slow learners are often ignored. For instance in Tamil Nadu, out of the 190 schools surveyed, 73 schools exceeded the mandated PTR of 40:1 in 2015. Students per classroom in these schools were between 41 and 104, with 28 of the 73 schools having 50 to 104 students per class.

However, it is important to take a look at the arguments that vouch for the NDP. While there is no research that actively suggests detention as a way to increase learning outcomes, there are multiple pieces of research that show the adverse impact of detention on students. The main argument of these studies is that detention can be detrimental to a student’s self-esteem and can lead to increased mental stress. This may lead to the student dropping out of school. The NDP was to capture school dropouts and increase the level of education in the country and so removing this policy does not solve the problem.

Thus, a combination of NDP and CCE is considered to be a sound policy, especially in a country like India, as it tries to go beyond the prevalent exam-centric culture by focusing on holistic education instead of rote-based learning. This policy is also beneficial for students from low-income backgrounds and girls, as they are often first-generation learners who do not have the support of their parents or access to coaching centres outside of school. No detention enables such students to pursue an education without the fear of being stopped half-way and actually gives them a chance to turn their lives around. However, the poor implementation of this policy coupled with negative results has led to the Centre scrapping NDP in the coming academic year.

Rajasthan Education Minister, Vasudev Devnani, and his Centre-appointed panel recommended a few modifications to the NDP in 2015. A couple of salient points of the new policy are:

Along with these recommendations, the committee also suggested introducing school-based final exams in classes 6 and 7 and an external examination in class 8

Looking at these recommendations, it is clear that the onus of performing still lies on students as the pass-fail system of examinations has been made out to be the only way to rectify the situation. The CCE’s faulty implementation in schools due to lack of awareness, resources, and poor teacher training has been conveniently ignored as one of the major factors that led to deteriorating learning outcomes. Failure to adhere to healthy pupil-teacher ratios and a shortage of trained teachers has also been a cause of the downfall of NDP. Teachers and parents need to be made aware of what schools are meant to provide to students as per the RTE in terms of education, which means both academic and non-academic development of students.

No detention no more

The 2019 Amendment to the RTE Act effectively spells out the end of the no detention policy in India. State governments now have the option to hold year-end examinations for classes 5 and 8. If a student fails this examination, he or she will be given additional help and an opportunity to appear for a re-examination within two months of the announcement of results. Failing the re-examination, however, may be grounds for detention. Presently, only 4 out of 29 states have decided to proceed with this; the rest will continue to follow the no detention policy until class 8.

In the report released by a Rajya Sabha Standing Committee in 2017, the ‘abysmally low learning levels among school children’ were cited as the rationale behind this shift in policy. However, it is not clear how returning to the rigid pass-fail regime of yore would adequately address this issue. With the absence of on-ground reforms to improve the pedagogic quality in our primary schools, coupled with an uncertain future of the CCE, it remains to be seen whether striking down Section 16 of the RTE Act is actually in the best interest of the millions of children it impacts.