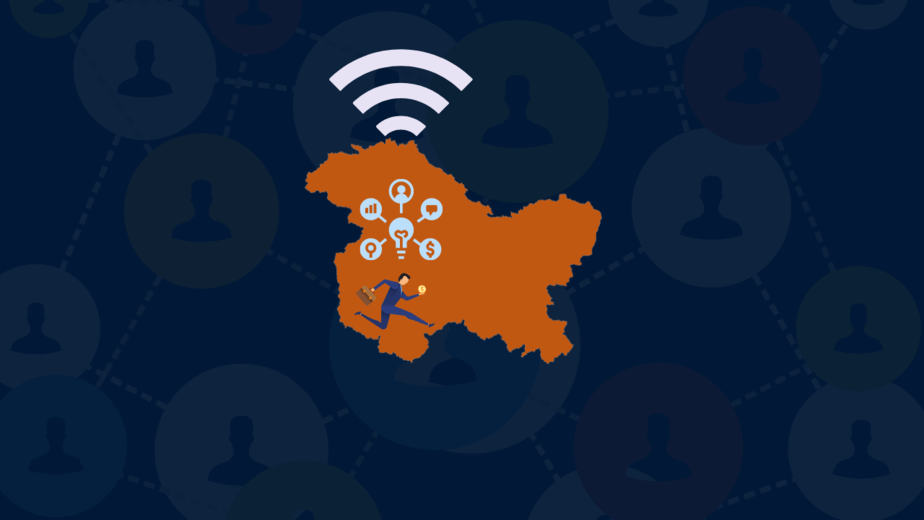 By August 5, 2019, when Article 370 was withdrawn, the online logistics startup Fastbeetle had established itself in Srinagar, helping around 300 merchant partners deliver their goods to their customers. 40 percent of these merchants were women, many of whom ran their small enterprises from home. The extended security siege and the internet shutdowns that came with removing J&K’s special autonomy had wiped out Fastbeetle.

“We couldn’t contact our team members, let alone our partners,” says Sheikh Samiullah, Fastbeetle’s 30-year-old founder. “It was as though we had never existed”.

Samiullah hoped that internet connectivity would be restored soon after so that he could resume his operations, but the Centre kept extending the suspension endlessly. It forced the Fastbeetle team to wind up and go their separate ways. Samiullah fled to Dubai to look for work; after he couldn’t find any, he returned to New Delhi in November 2020, where he stayed for four months contemplating his future.

Then, in February 2021, just as the government restored 2G mobile internet in Kashmir, he received calls from his teammates, asking him to return. And return he did. “We wanted to pick up from where we left off, but it was challenging to do so with just 2G connectivity,” Samiullah says with conviction. Since February this year, Fastbeetle has added 300 merchant partners. Samiullah’s team has grown to 35 members. With a turnover of ₹5 crores, they have plans to serve more businesses — especially those run by women — which need reliable logistics support to sustain themselves.

We are contributing towards empowering women in Kashmir. Our delivery boys make the location of the enterprises immaterial to the success of their business. These women can operate from their homes which are away from markets, get orders online, and ask us to deliver.

Like Fastbeetle, there are several tech startups in Kashmir which temporarily went bust in the conditions after Article 370 was revoked. These are now slowly but surely resurfacing. Take, for example, the IT sector, which took a big hit. IT firms across Srinagar employed an estimated 25000 people, but the lockdown and internet gag brought their operations to an abrupt halt. They were forced to relocate to cities like Chandigarh, New Delhi and Hyderabad to resume their work.

“Relocation didn’t benefit us. We had to spend more than we earned,” says Parvaiz Ahmad, who heads an IT firm with 150+ employees, serving clients in the US, Middle East and South Africa. “We had to [relocate] to keep faith with our clients, to ensure that they don’t give up on us. Many still did because the sudden communication blackout disrupted our ongoing projects… we couldn’t deliver on our contracts”. Most prominent IT companies were forced to shift base to other cities. Those that couldn’t relocate folded up, having lost human resources and clients who were nurtured over the years.

Several startups found it infeasible to relocate, like Lalchowk.in. The online book store was launched in August 2018; by August 2019, their eleven-member team had gone from servicing ten orders to around eighty every day. The prolonged internet gag forced the store to shut shop, with three of the five founders leaving the Valley in search of jobs. The other two – Sheikh Mohammad Usmaan and Haseeb Ashai – stayed back and resumed operations once slow-speed mobile internet was restored in 2020. After 4G resumed in February this year, they have registered a spurt in orders. “We are now back at 60 to 80 orders a day,” says Usmaan, who claims that 20 percent of their orders come from other parts of India, with 5 percent from the Middle East and Europe. “We are doing well as sellers of Islamic and Urdu literature”.

These New Start-Ups are Bred in Turmoil

Bolstered by the resumption of internet services, Kashmir has witnessed an efflorescence of new startups over the last year. Among them, Groxery, an online supermarket, stands out. Started by a former Grofers employee Malik Aadil, Groxery now delivers over 250 orders a day and racks up a monthly sale of over ₹50 lakh.

“Buying groceries online was a new concept in Kashmir. So, I took a huge risk,” Malik says. “What really helped was my previous experience in the business. By God’s grace, Groxery’s business took off. So much so, that now we even deliver morning tea bread to people, fresh from bakers’ tandoors”.

There’s also Tiffin Aaw, a homemade food delivery start-up, and Milkiyat, a property platform. Both were launched last year in the middle of a Covid-19 lockdown, much like Groxery was. “The lockdown was an opportunity,” says Rais Ahmad, founder of Tiffin Aaw”, adding that “…my first food deliveries were to people stuck alone at home due to lockdown”. During April and May, Ahmad says they delivered 80 orders everyday, and a significant number of these were to Covid-19 families, both at home and in hospitals.

As for Milkiyat, the lockdown came in handy to move Kashmir’s lucrative real estate business online. “We get rid of the need to physically engage with a number of property dealers to find the land, at least in the initial stages of the transaction,” says its founder Mohammad Tawqeer Munshi. “We get a growing number of enquiries from people in Kashmir and also from Kashmiri diaspora and a few from the rest of India”.

Jammu and Kashmir launched its first startup policy in September 2018, with an aim to facilitate the growth of 500 new startups in the next ten years. The “J&K Start-up Policy” mainly focuses on innovative projects, or “any idea capable of introducing new or disruptive technology in the development of existing and new products, processes or services”.

The tech start-up founders we spoke to did not think that the policy offered their ventures much. “As of now, the policy is only on paper,” says Samiullah. In fact, Fastbeetle was among the 12 startups selected to receive funding of ₹10 lakh each in February 2020 towards product research, development and marketing. “I have not received a penny of this money so far, nor have the other eleven [startups]”, he sighs. According to the latest data, sixty-nine startups have been registered in Jammu and Kashmir under the Startup India scheme.

Besides J&K’s specific policy, the centre has announced a massive ₹945-crore Startup India Seed Fund Scheme (SISFS) to promote and boost the startup ecosystem across the country. It is operational from April 1, 2021, to April 2025.

The larger impact of these platforms is their disruption of the ways in which business can be done in Kashmir. This has also impacted social behaviour. Whether it be the home delivery of restaurant quality food, or providing items and books, selling Kashmiri handicrafts to the world, or buying property online, Kashmir is witnessing an imperceptible shift away from physical to virtual transactions.

This is also opening up opportunities for the entrepreneurial youth to try out of box business ideas. One such idea that has been crystallized into a start-up is efruitmandi. Started in 2018 by Ubair Shah, an MBA graduate from Singapore, efruitmandi sells the fruit from Kashmiri farmers directly to the retailers in India, bypassing the mandis in Delhi.

“This earns farmers better profit than selling at mandis,” says Shah, adding that they have sold 300 metric tonnes of apples to retailers outside J&K so far this year. “We have plans to tweak the supply and value chain of fruit in Kashmir to benefit the producers”.

Yet, despite the emergence of scores of promising startups in the past two years, unlike in other parts of India, J&K’s start-up sector is still in its infancy. Especially for the few tech-based startups, the lingering conflict and the frequent communications gag have exponentially worsened their chances of survival.

Sectors still lie uncovered, like online education, tourism, pharma, ride-sharing, local jobs, online career-counselling, car and bike rentals, etc. “There is space and scope for many more start-ups,” says Malik Aadil of Groxery. “Kashmiri youth have ample talent for innovation. A little encouragement from the government and a sense of certainty about the internet situation can provide a fertile ground for entrepreneurial creativity”.