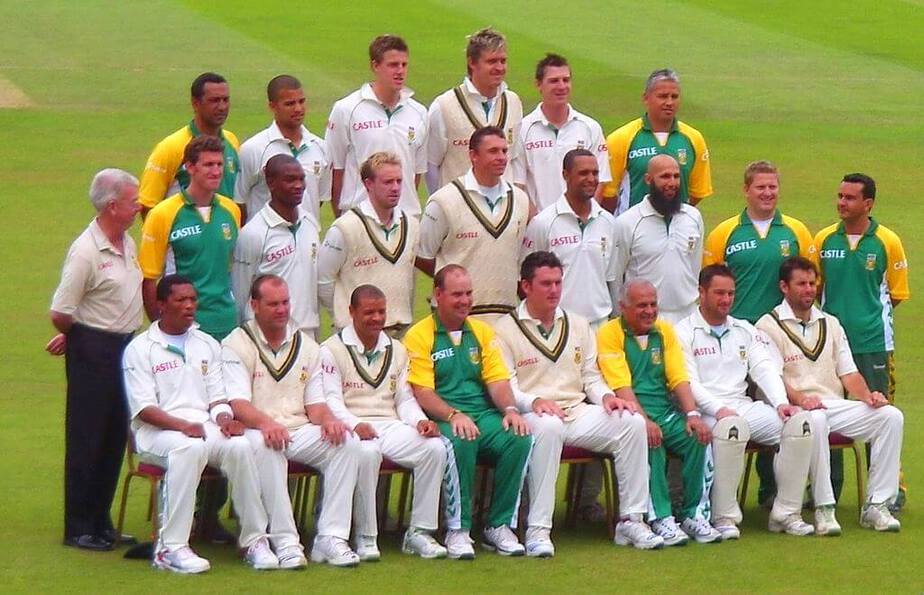 Despite their reputation for choking in major tournaments, South Africa has been among the best sides in international cricket for almost two decades. Ever since their re-admission to international cricket in 1991, the Proteas have reached the summit of both the ICC Test rankings and the ODI rankings, producing many of the greatest players of the current generation.

Although whites constitute less than 10% of the total population of the country, they have dominated the national side even after the fall of the Apartheid regime in 1994. Despite selection to the national team opening to all races and ethnicities since 1991, only a handful of non-whites have made a mark at the international level. This prompted the South African sports ministry to institute “transformation targets” in the domestic and international cricket structure in the country.

While that transformation targets’ supporters have claimed that it will boost representation of non-whites in the team, critics have pointed out that such a radical move will dilute the quality of cricket. Let’s first understand the history of cricket in South Africa before inspecting arguments from both sides of the quota debate.

Like in many other Commonwealth nations, cricket was brought to South Africa by the British in the 19th Century. South Africa made its test debut in 1888 against a touring England side, establishing themselves as the third test nation in the world (after Australia and England). But by the 1940s, just when the West Indies, India and Pakistan became active test playing nations, the South African government banned all matches involving teams that didn’t field white players.

A multi-racial South Africa walked out to play for the first team in an ODI series against India in 1991. Despite allowing players of all racial and ethnic backgrounds to play, the entire team that toured India was of European descent. Omar Henry made history in 1992 when he became the first non-white (Colored) player to represent South Africa at the international stage in the modern era.

But it wasn’t until 1998 that a black player had represented the country at the international stage; Makhaya Ntini, one of South Africa’s all-time greatest fast bowlers, went on to play over a 100 tests, picking up more than 600 wickets across all formats. In 2006, Ashwell Prince broke new ground for non-white cricketers by becoming the first non-white captain to lead South Africa in an international game. South Africa finally seemed to have achieved the racial harmony it had been striving for in nearly two decades.

Informal quotas were in place across many of South Africa’s sporting teams until 2007. It was an unwritten rule that there would be at least four players of colour in South Africa’s playing XIs. This resulted in talented white players, like Kevin Pietersen and Andrew Strauss, leaving for the shores of the UK at a young age, only to go on to represent England in over a 100 tests apiece.

The quota system didn’t achieve its goals of promoting black athletes and was scrapped, in order to be replaced by better funding programs to help black athletes excel. The idea of a quota wasn’t revisited until 2016 when black athletes were still struggling to play international cricket.

Cricket South Africa rolled out its mandatory transformation targets before the start of the South African summer of 2016, as studies had shown that it was the only way to improve the participation of black cricketers. The new rules stated that a minimum of 6 players out of the 11 in an international game, had to be non-white, while at least 2 of them had to be black.

The targets were to be met on an average basis at the end of the year, allowing for some flexibility with team selections. On the other hand, it became mandatory for domestic cricket teams to have at least 6 non-whites in every game, with 2 blacks at least. A ban on hosting international tournaments was placed on Cricket South Africa by the Sports Ministry until the transformation targets were successfully met. 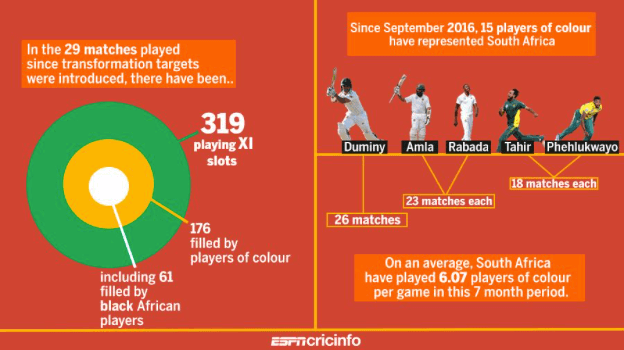 The new quota system acknowledges South Africa’s troubled history with racism. The black majority of the country was subject to brutal oppression for well over 50 years under the Apartheid regime. Leave alone the fact that daily life was harsh for most blacks in South Africa, access to sports was also cut off by the government

In many ways, the new quotas will extend sporting opportunities to a community that has been historically disadvantaged. Cricket was always seen as the ‘gentleman’s game’ and blacks were considered too inferior to play the sport. The grassroots culture of the sport had changed very little in the early years of post-Apartheid South Africa, resulting in few blacks playing the game at a professional level. The structure that scouted for cricketing talent for decades was in need of a major overhaul; therefore, the current quota system is seen as a solution to bring more blacks into the game.

The quota at the domestic level will make a huge impact over the next few years as many players that may have been overlooked before will now get to showcase their skills and earn their opportunity to play for the national team. Reversing the policies that existed for over half a century is not a task that can be achieved overnight and the South African government has made it clear that it will do its best to level the playing field.

Although the ban was lifted in May 2017 after CSA met the targets for 2016-17, they failed to meet the criteria during the 2017-18 season. Numerous selection complications have plagued the South African team over the past 2 seasons as a result of this new criteria. Kagiso Rabada (black), Vernon Philander (coloured), Hashim Amla and Keshav Maharaj (both Indian) have been the only non-whites who’ve been consistently selected in the test team over the past 2 years.

South Africa’s batting department relies heavily on its white players, leaving very little room for non-white players to break into the team. Temba Bavuma, the only black batsman to play for South Africa in tests in recent years, has struggled to make the squad on a regular basis, as many critics have questioned whether he has merited his place.

The team had already come under fire at the 2015 World Cup after dropping an in-form Kyle Abbott (white), in favour of a half-fit Vernon Philander for the semi-final against New Zealand, in order to fulfil informal selection targets. Philander proved to be expensive with the ball on the day and South Africa lost in heartbreaking fashion — many experts speculated whether Abbott would’ve been a better choice.

Abbott ended his international career in 2017 after signing a county contract, along with many other white players, who were worried about their futures with the national side. Morne Morkel’s untimely retirement from international games at the age of 33, is another example of white players making the move to county cricket after feeling the heat of the quota.The exodus of talented white players continues to be a thorn in the side of South African cricket.

The recent limited overs series against India saw many non-white players make the playing XI as senior players such as AB De Villiers, Faf du Plessis and Quinton de Kock were are all sidelined. The retirement of Morne Morkel and the constant injury troubles of Dale Steyn mean that it is likely that more non-white players may represent the team in the future. Yet, questions continue to stream in about whether such players would be able to break into the team solely on merit, without the help of others’ injuries or retirements.

What the future holds

The Proteas did enjoy a fruitful home summer after winning test series’ against Bangladesh, India and Australia, despite being humbled by India in the ODI and T20 legs of the tour. However, with CSA missing the transformation targets for 2017-18, dark clouds seem to be looming over South Africa’s plans for the upcoming season. The retirement of veterans such as Morne Morkel and JP Duminy in the recent past is likely to open up more slots in the playing XI for newcomers. Other veterans such as Hashim Amla, AB de Villiers, Faf du Plessis and Dale Steyn are all into their mid-30s and may not play in the national colours for much longer.

With the World Cup of 2019 on the horizon, South Africa will have to dig deeper into their talent pool of non-white players and ensure that the very best of them get to play at the highest level. Many of today’s aspiring non-white cricketers are now being given a chance that their fathers or grandfathers were never offered.

And while questions over their place in the side will continue for as long as transformation targets are in place, it is important that they are able to justify it with good performances whenever they get the opportunities to play. It may not be too long before we see more Ntinis, Rabadas and Bavumas take the centre stage for South Africa and leave their mark on international cricket. 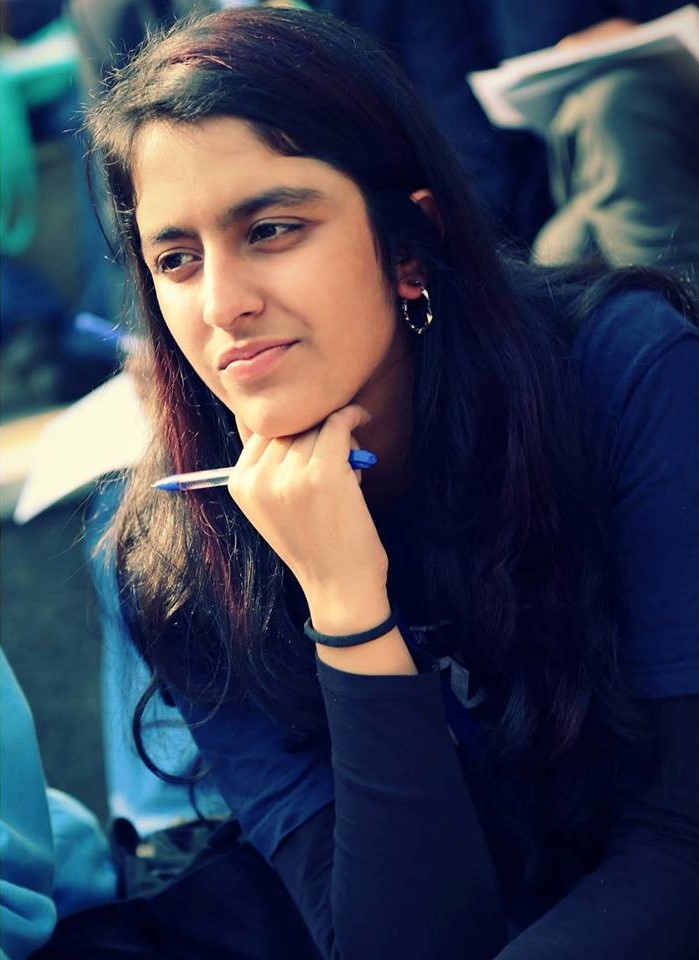