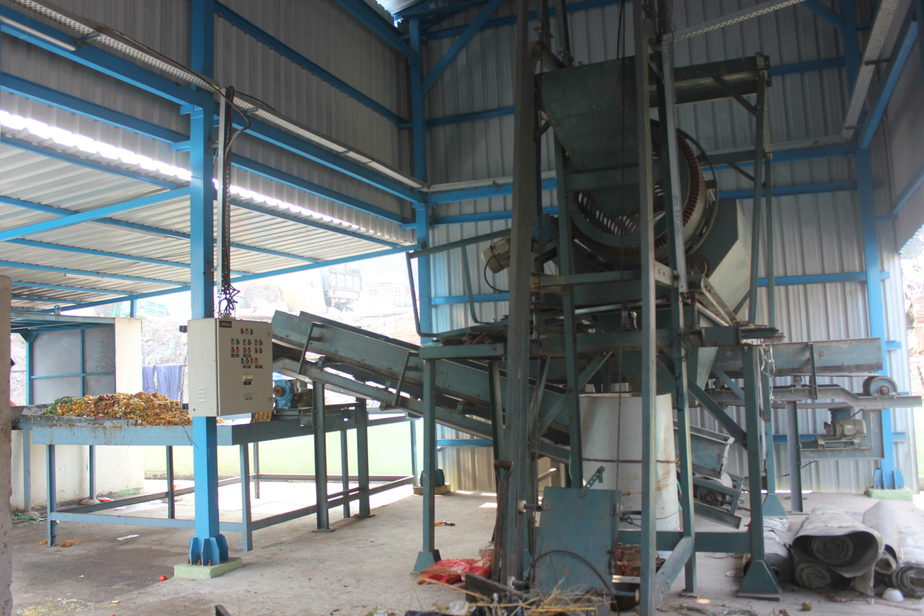 Two children are occupied with a game of gilli danda, in the far end of Multani Mohalla. Their game would not have been possible last year. Until then, this appendage of East Delhi’s Geeta Colony used to be a municipal waste dumping site, extending into a large area dumped with municipal solid waste. Today, a biomethanation plant has been running in its place for about three months, covering an area of 600 square metres. The garbage piles around it have markedly diminished, providing the children the space for their game.

“The way that the garbage was piling up here, we would have reached the fate of Ghazipur landfill,” says Prabhakar Prajapati, operator and supervisor with Blue Planet Yasasu, the company operating this biomethanation plant alongside the East Delhi Municipal Corporation (EDMC). With the EDMC catering to a population of over 40 lakhs that generate about 2500 metric tonnes of waste per day in East Delhi alone, such a possibility does not seem far-fetched.

Currently, in Delhi, only 55% of the total 10,500 tonnes of waste generated per day is processed. The rest of the unprocessed waste is dumped unscientifically at Bhalswa, Ghazipur and Okhla, the city’s three landfills, which are slowly reaching its saturation. In the rest of the country, an even smaller proportion of 28% of daily waste is processed and treated, leaving a colossal amount of waste to be dumped unscientifically.

If this trend continues, India will need 3.40 lakh cubic metres of landfill space every day to cope, according to the estimates of a Standing Committee report of Urban Development.

You May Also Like: The Aravallis are Calling…for Help

The same report also points out that in India, 45-50% of the waste generated is wet waste. Technically speaking, this huge amount of waste should not be making its way to landfills at all, as the Municipal Solid Waste Management guidelines specifically prohibit it. So, where should it go?

This is where biomethanation plants are offered as a solution. Such plants can reduce the burden on landfills by managing the disposal and treatment of wet waste, while also producing electricity. Although Power and Energy Minister RK Singh recently announced that India has the potential to generate around 18000 MW of renewable energy using biomass, municipal authorities have only set up 172 biomethanation plants in India so far.

The process of biomethanation allows for the conversion of organic matter into energy-rich biogas in the absence of oxygen. The biogas produced is typically constituted by 40 to 60% of methane, while the rest is constituted by carbon dioxide, and traces of other gases.

In this plant at Multani Mohalla, an EDMC truck first unloads the waste after collecting it from different areas of North-East Delhi. “EDMC trucks are currently carrying out door to door collection of segregated waste,” informs S. D Tomar, Executive Engineer of EDMC. “So, we are trying to ensure that most of the waste that reaches the plant is segregated.” The waste still goes through a round of manual segregation to ensure that only wet waste is processed. From here, it makes its way to the segregating table for another round of mechanized segregation. The ‘rejected’ waste is then sent to Ghazipur landfill. The segregated wet waste is then sent to the bio-crusher where it is converted into a paste-like consistency, before heading to the digester.

“It takes about 20 days for the gas to be created,” mentions Prabhakar. “Since we are processing waste everyday here, the gas is currently available on an everyday basis.” The collected gas is passed through a filter to ensure that only methane is transmitted into the engine that creates electricity. This particular bio-gas plant creates about 250 units of electricity per day, which is then fed into the BSES grid.

“Apart from sending electricity into the grid, the plant itself also uses the electricity created. The amount that is generated is such that the plant can run for four to five hours,” mentions Prabhakar. Currently, the plant is operating with the 1-2 tonnes of waste collected per day; yet, it has a capacity of processing 5 tonnes a day.

The optimal functioning of a biomethanation plant depends largely upon its input feed; it requires segregated biodegradable municipal solid waste. This homogeneity of the feed is important to maintain the efficiency of the plant’s operation. But, Prabhakar notes that “Not all waste that reaches here comes segregated. Currently, efforts are on to spread more awareness about the need for segregation at source.” Since not all waste is segregated, a large amount of time is still spent in segregating the waste manually.

Apart from this, another challenge stares at the biomethanation plant.

The Challenges of Centralised Waste Collection

“The Municipal Solid Waste Management rules call for a need of a more decentralised approach to managing solid waste,” says S. D Tomar. “This plant is an example of just that.” Ideally, this should mean that what is generated locally is also managed locally. However, Jyoti’s experience, whose home is just a two-minute walk away from the plant, has been different.

“I have lived here for 25 years,” Jyoti says. “In all those years, we dumped our waste in that ground, where the plant now operates. But now after the plant, we are being stopped from dumping waste there.”

The roads in Multani Mohalla are too narrow for an EDMC truck to drive through and collect segregated waste. With no door-to-door segregation possible here, and an additional prohibition on dumping garbage near the plant, the residents who live closest to the plant are in a conundrum over what to do with their waste.

“People in the basti have now been stopped from dumping waste here. Look around here, do you think anyone will come here for what they call ‘door-to-door’ waste collection?” echoes Resampati, who has been living in Safeda Basti, another narrow-laned, low-income residential area for the past 35 years.

The current situation not only questions the ‘decentralised’ aspect of waste management, but it also remarks upon a larger, more important issue—with some waste still being dumped around the plant, the purpose of the biomethanation plant might just be defeated.

For this new biomethanation plant in Geeta Colony, teething problems are obvious. But the line between initial teething issues and problems with implementation is a thin one. If left unaddressed, these issues may slowly transgress into the latter category.

At present, raising awareness around segregation at the source is on. It also looks like Multani Mohalla and Safeda Basti have garnered some attention. “The other day an official from MCD came to talk about providing two separate dustbins for wet waste and dry waste for each household in this basti,” Resampati informs. If dustbins are here, collection of waste too should (ideally) not be far behind.

“Kude ke pahad banane se toh acha hai ye, (it’s better than creating mountains of waste)”, says Prabhakar. Biomethanation plants shift the focus from continuously searching for new areas to create landfills out of, to locally treating a huge component of municipal solid waste. Moreover, this can also shift the focus from highly controversial Waste to Energy (WTE) Plants. While these financially unviable WTE plants can incinerate the non-biodegradable components of our waste, they have been facing the people’s opposition, because of which, most of them have been shut down.

You May Also Like: “We don’t want electricity at the cost of lives” The Toxic Impact of Okhla’s Waste to Energy Plant

Additionally, only about 15% of waste in the country can actually be used for these incineration plants. Then, why not focus our attention towards disposing of the majority of the waste we generate? Biomethanation plants can aggravate that shift.

This article is the final instalment of our series ‘In the name of Green Solutions.’ Cover photo by Vaishnavi Rathore.