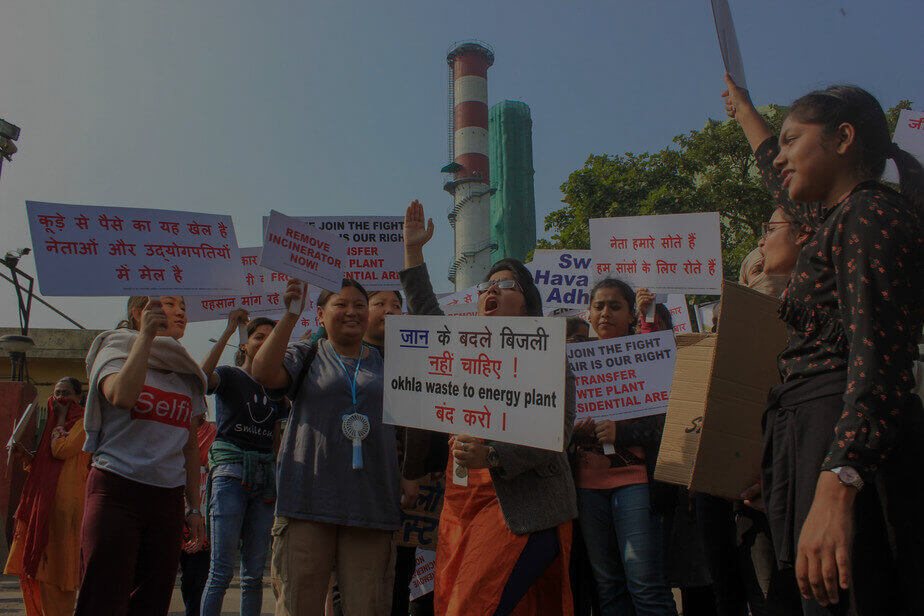 One night, Lata Joshi left a white cloth to dry in her balcony. When she saw it in the morning, it had turned sooty-grey. Her plants were covered in a layer of soot too. The producer of this ash–and also toxic dioxide and furans–is a Waste to Energy plant in sub-urban Okhla in South Delhi. The plant has been running for more than a decade, after receiving a green signal from the Ministry of Environment, Forests and Climate Change (MoEFCC) in 2007. Lata Joshi’s home is in Sukhdev Vihar, less than 100 metres away from the plant.

Waste-to-Energy (WTE) plants are a type of waste management facility that combust municipal solid waste to produce electricity. Since these plants need at least 300 tonnes of waste per day to be viable, they find homes in large cities with populations over 2 million. At present, India has 8 such plants, and Delhi alone has 3. In the name of green solutions, there has been an aggravated push for setting up 56 more across the country—the most recent one being a 5MW plant proposed in Bangalore, which has already faced opposition from citizen groups on the grounds of health risks and environmental sustainability.

@PMOIndia
Please do not make Bangalore another Delhi!! We are fighting all sorts of pollution already..do not make waste to energy plant in such densely populated residential area and IT hub.the “startup city” will die a cancerous death..#letecitybreathe #saynotowte @ECityRising https://t.co/kaYNnoAegr

Undoubtedly, the problem of waste that we are facing today requires solutions that are pragmatic and implementable. A report by the Planning Commission projected that the quantity of waste generated in India will hit 165 million tonnes by 2031. At this rate, the land required to set up landfills for the next 20 years—considering their 10-metre high waste pile—could be an enormous 66 thousand hectares. That leaves us with processing the waste before it reaches the landfill. But, is a WTE plant the solution that we are looking for?

The experience with Okhla begs to differ.

Keeping Residents in the Dark

An on-site public consultation is mandated by the 2006 Environmental Impact Assessment (EIA) notification issued by the MoEFCC, to ensure that the concerns of local affected persons and stakeholders are ascertained. In the case of Okhla, this was far from done.

“The public consultation was held in the DM’s office in Saket,” informs Ranjit Devraj, an environment writer and resident of the area. “I have the minutes and the attendance sheet of it and it shows that only 2 people attended it, both of whom were officials of SDMC. There was no effort from them to involve us locals.” So, without proper public consultation and representation of the voices of those directly impacted, the project received clearance in 2007. In the meanwhile, the residents were kept in the dark about the plant, the technology used, and what its possible impacts could be.

“The ‘fact’ that these technologies are ‘eco-friendly’ is a myth,” says Ranjit. The Okhla plant’s series of non-compliances and resulting toxic emissions corroborate Ranjit’s comment.

The conditions in the Environmental Clearance for the Okhla plant clearly permit it to generate 16 MW of power, by processing 600 to 720 tonnes per day of refuse-derived fuel (RDF). RDF constitutes the non-recyclable and combustible fraction of processed municipal solid waste. Since 2015 however, the plant has been processing an unauthorized amount of waste. It constructed a new chimney without prior permission, thus generating 23MW of electricity, as opposed to the authorized 16MW.

The plant has deviated from another compliance condition: where the waste was supposed to be processed in the two areas of Okhla and Timarpur, the plant was processing all the waste in Okhla alone, and that too, with violations. The impacts of these violations come in the form of increased waste used, and higher toxic emissions. “Right now in the middle of Delhi’s pollution crisis, they are making it impossible for people to live around the plant,” says Ranjit.

According to the Municipal Solid Waste Management guidelines, a WTE plant of this capacity needs to have a buffer zone of 500 metres around the zone. For some homes in this residential area though, the plant is literally a stone’s throw away, at 30 metres instead.

Residents here then, face the brunt.

“In one of the protests against the plant recently, we had many doctors join us,” says Huma Hashim, President of the NGO Centre for Changing Societies and a resident of Sukhdev Vihar. “They joined specifically because they observed an increase in the past few years in the number of patients suffering from cancer, asthma, and tuberculosis from nearby areas.”

Due to the non-compliances, and public representations by the residents against the plant’s functioning, a show-cause notice was issued to the plant in April of 2019 by the MoEFCC.

Since the waste brought here is unsegregated, it makes the incineration process complex. Where waste with a combustion value of at least 1600kcal/kg is required for efficient burning, the Okhla plant is burning wet waste along with other unsegregated waste. Wet waste has a lower calorific value of about 1300 kcal/kg. A lower calorific value than recommended means that the waste requires additional fuel for it to burn and further, generate electricity.

“If you look at the ash that is generated, you will see pieces of unburnt plastic,” says Ranjit. “A waste to energy plant should be able to incinerate it completely. How it functions now completely beats the purpose since the waste is just ending up in the same form at the landfills.”

The need to utilise the correct technology has been highlighted even by the 2018-19 standing committee report on urban development. Considering the protests around Okhla, they recommended that the Government should “sparingly go for such plants which comply with the available norms and use the foolproof technologies available [instead]”.

Interestingly, it’s not just the Okhla plant in Delhi that is on a downward spiral. Across the country, many private-sector funded WTE plants including those in Vijaywada, Hyderabad, Lucknow, and Kanpur have shut down or are not functioning at their full capacity, as the Planning Commission report shows. Two common reasons are cited for their shut down—one, a lack of due diligence on the part of the investor and public sector, and two, the presence of inerts in the waste meant for processing, making the process difficult and expensive. These are synonymous with Okhla’s experience too.

Where Are We Now

Regardless of the contribution of these plants in polluting the air, the push to implement them continues. It is a matter of surprise that the Environmental Pollution (Prevention & Control) Authority for the National Capital Region (EPCA), a central government constituted committee for the NCR, in its special report on air pollution hotspots in NCR recommended a Waste to Energy Plant for Hapur and Meerut Nagar Nigam. The report states that “the proposal…must be explore(d) on top priority”.

As far as the Okhla plant is concerned, the MoEFCC has issued directions through an office order in September, 2019, after finding the plant operator guilty of violations. It has directed the operators to conduct an ecological damage assessment and remediation plan. Additionally, operators are to monitor the emissions of dioxins and furans once a month and then submit a report to the concerned authorities.

“These conditions were anyway part of the Environmental Clearance,” says Ranjit. “They have been bypassing it for 8 years and now, MoEFCC still has to tell them to do the same.”

In order to push for more stringent measures, the residents of Sukhdev Vihar wrote to the Central Pollution Control Board (CPCB) immediately after the office order. “We write to protest that CPCB teams …have failed to identify the Okhla Waste incinerator as a major source of pollution…we demand immediate closure of a dangerously toxic plant being operated in the middle of thickly populated residential and institutional areas of South Delhi,” their letter states.

The protest of 29th November at the Okhla plant also voiced a similar demand.  A student held a placard saying “Jaan ke badle bijli, nahi chahiye (We don’t want electricity at the cost of our lives).” As the rest of the crowd chanted slogans, an SDMC garbage truck prepared to unload the municipal waste. Yet, still, the Okhla Waste to Energy Plant continues processing, the emissions continue to be emitted, and people continue to be affected.

“Nothing justifies what the plant is currently doing,” says Ranjit.

This article is the second instalment of our series ‘In the Name of Green Solutions.’ Cover photo by Vaishnavi Rathore.