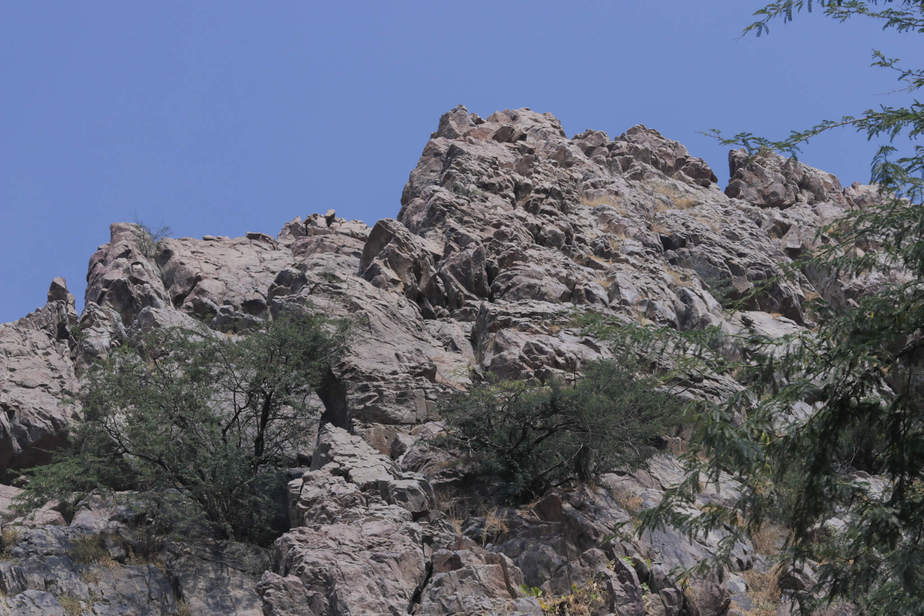 “When we were around 9 years old, we used to go to the bani, and you would not believe the kind of wildlife that thrived there,” Rakesh tells us, referring to the sacred grove that rests within the Aravalli ranges. He extends his hands about a foot wide and says, “We used to collect these many peacock feathers from the bani and get them home to decorate our cows!” Rakesh takes yoga classes for children and youth in village Pali, Faridabad. We are sitting in his friend’s house, accompanied by a few of his acquaintances.  Inside, a hookah rests between the two charpais that we are sitting on, and outside a herd of buffaloes make their way towards the grazing grounds in the Aravallis, less than 2 kilometres from where we sat sipping chai.

“There was an elderly person in the village who was well versed with medicinal properties of what grew in the bani,” Rakesh tells us. The bani, in effect, is a common land available for use to all residents for purposes of grazing amongst other worries, which is classified as ‘shamlat deh’ in revenue land records.

A few kilometers within this, on the top of the hill, a 30-acre garbage disposal site was proposed in September by the Principal Secretary to Government of Haryana. The municipal waste of the cities of Gurgaon and Faridabad will be dumped here.

Pali looks like a large village; the 2011 census informs us that almost 8000 people reside here. Almost two-thirds of the land here is mountainous, and just about one-fourth is available for growing crops, chiefly wheat, bajra, and jowar.

Being one of the oldest villages of Haryana as well as its large population also earned it the name of ‘Pali Mata’ (divine mother). ’When a maha-panchayat (a large panchayat level meeting) of 13-14 villages was organized in Pali on October 4th, in view of the upcoming Haryana elections, Jitender Bhadana from Save Aravallis Trust put forth the residents’ plight over the proposed garbage site.  With emotions running high, Jitender asked the BJP contender Nagendra Bhadana, “Pali is known as Pali Mata, but are you really treating us as one? You are talking about dumping waste on us instead.”

As we sat down to talk about the details, Bhaghender and Rakesh, who are also associated with Save Aravallis Trust talk about why preparations to protest against this move are on.

“It has become Acid”

Bhagender reminisces, “When we were kids, there were waterfalls that dotted the entire bani. On our way to school, we would bathe here. I and so many others have grown up drinking the water of the village’s wells.” An hour after the conversation on the charpais, we would find ourselves deep in the bani, where a Hanuman temple stands. The waste disposal site is proposed on a hill behind this. We stand in the midst of kikar and jamun trees supported by the Aravallis, peering into what used to be a natural spring. Currently, some water struggles to maintain its stand. A pipe connects the spring to an area ahead. It runs completely dry.

“Most of the people used to take their livestock to graze and drink water in the forests,” says Ravinder, a government school teacher in Pali who had also joined in the conversation. “After a lot of cattle started dying sudden deaths, people have stopped taking them there. The water now has become so polluted and dark, ekdam kaala.” Bhagender then adds, smiling at his own creativity, “Esa lagta hai kalapani ki saza de rahe hai! (it feels like they are punishing us in Kalapani, referring to the infamous “kalapani” prison in the Andamans, where during the colonial rule those who revolted against the British were sent).

In 1992, a stone crusher zone was allotted along the same bani, just above Bhagendar’s village. In fact, the Pali-Mohabatabad stone crusher zone is supposed to be the largest in India. 30% of these crushers are still in forest land, as a memorandum submitted to political representatives by Save Aravallis Trust, states. Walking into the Bani admiring the gradual silence, meandering peacocks and the sea of green, Rakesh points towards a plant’s leaves. He moves his finger across the leaf, leaving behind a clean stroke amidst the dust on the leaf’s surface.

To add to these worries, a hazardous bio-medical waste plant was also demarcated in 1995 on the road to the stone crusher. When it rains, the leachate seeps into the ground, contaminating the groundwater. The same was the fate of Bhandwari waste treatment plant towards Gurgaon where a report by the National Environment Engineering Research Institute informed of groundwater contamination in villages close to the plant.

Looking at a langoor in a Babul tree close to the temple, I was thinking about the contrast of a waste plant in this greenery. I squint at the omnipresent dust that lightly flows. But I know that this could be much worse. The Aravallis prevent the sands from Rajasthan from crossing towards the other side towards Delhi NCR; they are a natural barrier to desertification.

The mountains in some parts look like they have been sliced. And that’s because they have; mining was a popular activity before the  Supreme Court put a ban on it in 2002, unless cleared by the Union Ministry of Environment, Forest and Climate Change (MoEFCC). But the ghosts of mining seemed alive in Pali. While we were driving out of the bani, we drove through what was constructed as labour colonies for the miners. The roads that we were on were constructed then for easier transportation. We then spot a water tank, and a school—both non-functional now.

While the hills have been spared now, residents still face the repercussions. With the crusher zone being introduced in Pali and years of mining before the ban, diseases like tuberculosis and silicosis became common. Cancer too, has made its rounds. Ravinder informs, “At present, there are about 15-20 cancer patients that live in Pali, so many more have died.” Ravinder’s mother died of cancer last year.

The temple is located in an area from where the crusher zone is barely a few kilometres away, and mining was common earlier. It then becomes easier to understand why the springs diminished, waterfalls vanished, and the pipe runs dry. For an area that is already facing issues, and has had a past of many bitter experiences, a waste disposal site would be the final nail in the coffin here.

So why does Pali have to bear with bitter experiences and continued developments? The answer to this lies in the complicated case of land acquisition in Pali, which we explore in Part 3 of this series.