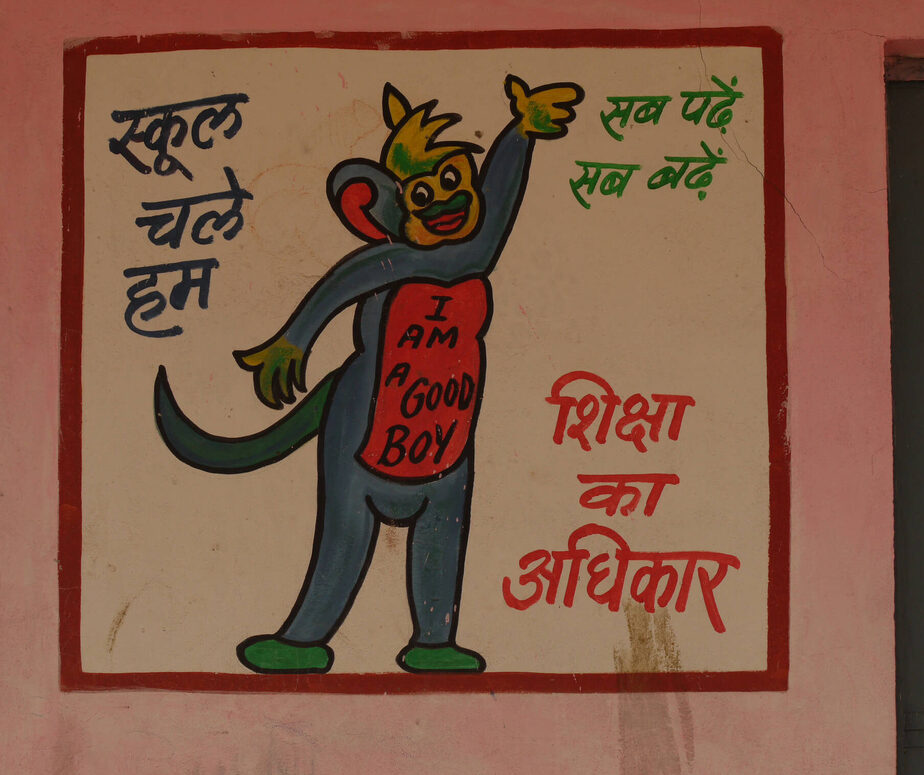 “To foster sustainable development, learners must have access to education in their mother tongue and in other languages. It is through the mastery of the first language or mother tongue that the basic skills of reading, writing and numeracy are acquired. Local languages, especially minority and indigenous, transmit cultures, values and traditional knowledge, thus play an important role in promoting sustainable futures.” – UNESCO 2018

Despite varied efforts to improve enrollment and achievement rates in school, India’s education system fails to deliver. Amongst other factors, language and medium of instruction can be held partially responsible. Education policy on language is either guided by national political interests endorsing Hindi, or public aspirations for socio-economic advancement that advocate an English-medium education.

Caught in the middle of this political tussle are nearly 250 million Indian children. By virtue of these poor education policies, a significantly large proportion of these children fail to receive a quality education. The solution could lie in a third alternative. The tried and tested formula of multilingual mother tongue education could enhance both: learning outcomes for students as well as society-wide prosperity.

Multilingual mother tongue education was first introduced in the Education Policy of 1968, through the Three Language Formula (TLF). Jointly formulated by Central and state governments, it mandated that every child learn three languages: the mother tongue, Hindi and English. The formula prescribed a combination of Hindi, English and a modern Indian language (preferably South Indian) for Hindi-speaking areas, while a combination of Hindi, English and the regional language was prescribed for Non-Hindi-speaking areas. Although successive Education Policies have consistently included the TLF, till date it has failed to be uniformly implemented across states.

The main cause for its ineffective implementation was the reluctance of South Indian states to teach Hindi. On the other hand, Hindi-speaking states failed to incorporate South Indian regional languages into their curriculum. Additionally, discrepant (if not varied) implementation across schools and the fear of burdening students with too many languages weakened the intended outcomes of the formula. Unavailability of additional language teachers and inadequate teaching and learning resources also contributed to its failure.

As the Indian economy integrates further with global markets, the importance of English is bound to increase, sidelining regional languages. Conducted in 1993, the Sixth All India Education survey found that English-medium schools made up ~5% of the schools at the primary stage; by 2002, the corresponding figures had risen to ~13%.

Furthermore, the growing emphasis on Hindi in school curricula is viewed as a nationalistic counter to this growing demand for a ‘colonial’ English-medium education. As a result, Hindi imperialism has persisted since Independence, often sidelining minority languages. The increasingly mainstream Hindutva ideology — of a united Hindu India — fuels homogenous linguistic nationalism realized through a Hindi speaking nation. The present government has vigorously promoted Hindi as a medium of instruction, or first language, and is reported to be taking several steps to give Hindi ‘its due importance’ in the upcoming education policy (originally slated for release in late 2017).

Moving towards replacing mother tongue learning via instruction solely in English or Hindi can compromise student learning outcomes, amongst its other disadvantages.

While an English-medium education is preferred for perceived economic opportunities in the future, a 2015 study by CESS-UNICEF found that studying in English-medium primary schools can lower learning levels. Revealing that academic achievements are responsive to the medium of instruction in schools, the study suggests that at the primary level, students will be able to learn more effectively if taught in their native language. A controlled study titled Earning but Not Learning? English Medium Instruction in Indian Primary Schools further corroborates this, noting that mathematics and reading learning outcomes were lower in both public and private English-medium schools.

A Mauritian study further examined the effects of subduing education in the mother tongue. It was found that significant student absenteeism is linked with struggling to understand and cope while learning a new language. Lack of academic interest and failure rates are also high among students who do not initiate their education in their own mother tongue, as concepts are not understood thoroughly. Further fear of failure leads to high dropout rates. As language is closely linked to ideas, thoughts and expressions, failure in terms of children’s cognitive, emotional, psychological and social development was also marked.

Therefore, championing a variety of mother tongues would have immense impacts on Indian education and social indicators. Multilingual education would facilitate access to education while fostering equality among communities. It achieves a harmonious interaction between global and local spheres by facilitating participation and action in society, simultaneously granting access to new cultural expressions and knowledge.

As one of the first states to advocate a mother tongue-based multilingual education system, Odisha has incidentally witnessed a corresponding decrease in dropout rates and improvement in educational performance. Several studies further show that there are definite and direct benefits to a multilingual education such as better conceptual understanding, stronger literacy skills, higher cognitive language proficiency and consequently better performance on tests.

It is imperative, therefore, that we equip our students to navigate with ease between vernacular media and English. The ease of navigation between English and vernacular languages will help create the ideal conditions for acquisition of knowledge as well as lay a strong foundation for the emergence of a more egalitarian society.

Recommendations by the Committee for Evolution of the New Education Policy (2016) suggest that the mother tongue or regional language should be the medium of instruction up till Class 5. The committee also recommends that the choice of second and third languages (at the primary and secondary level respectively) be left to state discretion, provided the previous recommendation is fulfilled.  However, such general policy frameworks are insufficient. It is important that teachers are trained to understand that the more they help children use and learn through their mother tongues, the more likely they are to achieve better educational performance, including second language skills. Further, provisions should also be made to effectively evaluate education policy, with language indicators in assessment systems for learning outcomes and school quality. UNESCO recommends highlighting coverage of primary education in mother tongue as an indicator of education quality.

When planned and resourced well, mother tongue-based bilingual or multilingual education can have substantial impacts on both education access and quality. While practical challenges persist surrounding the mechanics of a large-scale transition to multilingual education systems, the evidence is clear that failing to kick-start the process is taking a severe toll on educational access and delivery of outcomes. The success of a multilingual mother tongue-based education boils down to the public perception of such a formula, and whether it aligns with public aspirations. The onus then falls on us, as a society, to prioritize student learning outcomes and understanding, and encourage efforts in that direction.