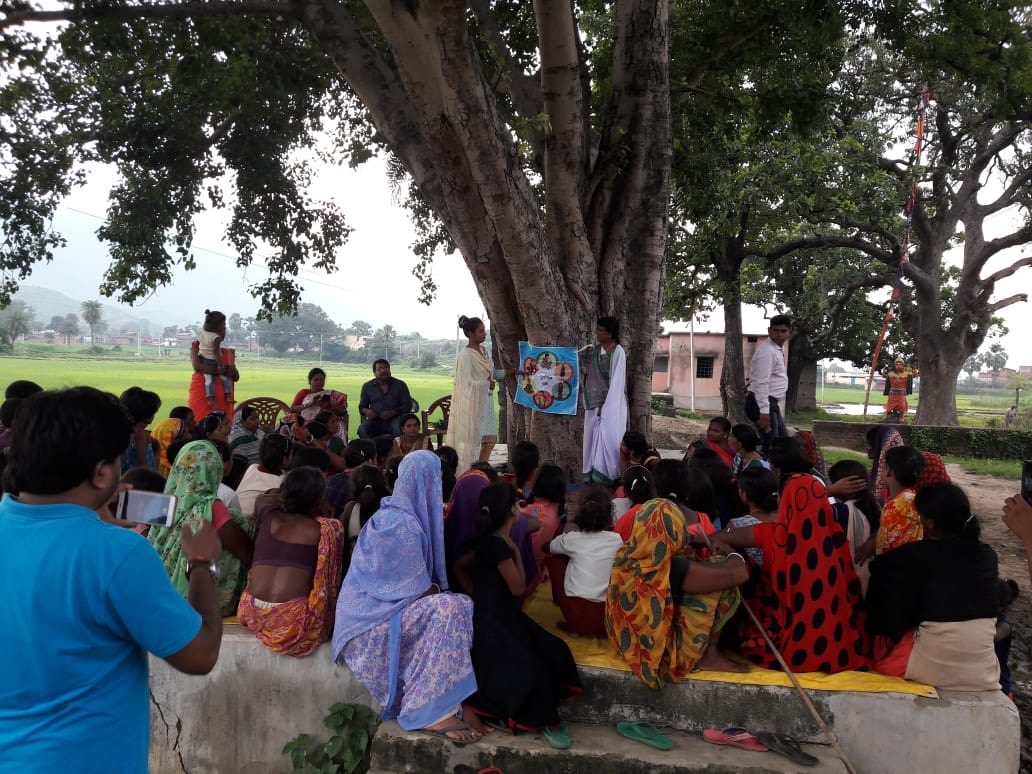 Reena Kumari* is a resident of a remote village in Hazaribagh district in Jharkhand. In 2014, for reasons unknown to Reena, she lost her first child, leaving her shattered and inconsolable. Fast-forward to today, and Reena is a mother of healthy twins whose health she owes to the critical care and support she received from her village’s Sahiya, who is an Accredited Social Health Activists (ASHA) worker. During Reena’s second pregnancy, she started attending monthly Participatory Learning and Action (PLA) meetings that were facilitated by the Sahiya (a word that literally translates to ‘friend’ in English). “When I became pregnant again, I shared the news with our Sahiya, who registered my pregnancy at the Anganwadi Centre. Following her advice, I had four antenatal check-ups, and availed supplementary nutrition and immunisation services,” she tells us.

“On the day of delivery, I immediately informed the Sahiya about my labour pain. She helped in taking me to the nearest district hospital, where I gave birth to healthy twins — a son and a daughter,” Reena recalls with gratitude. “The Sahiya was pivotal in my pregnancy journey… It was because of her support and my learning [from the meetings which she conducted] that I could make timely decisions regarding my health. I continued reaching out to the Sahiya to seek regular guidance post-delivery.”

Reena Kumari is one of several women in rural India who have been instilled with confidence to have a safe pregnancy and give birth to a healthy baby by an ASHA worker. ASHAs were introduced to India’s health system in 2005 under the flagship National Rural Health Mission and were intended to be an interface between the community and our public health delivery systems. Besides the role of mobilising pregnant women for institutional deliveries, some of their other roles involve sharing knowledge on thematic areas such as pregnancy and birth-preparedness, nutrition, sanitation, hygiene, family planning, increasing use of existing public health services, and mobilising the community towards local health planning. ASHAs are agents of social change who play a vital role in improving health outcomes in a community. As of 2019, there are almost one million trained ASHA workers across India.

The Participatory Learning and Action (PLA) meetings which Reena Kumari was fondly referring to are structured monthly meetings wherein community members can assess health-related challenges, explore possible solutions, and implement their chosen context-relevant strategies. This enables the community actors to take ownership of their healthcare needs.

From 2017 to 2020, PLA meetings were scaled up to a programme called Facilitated Learning and Action Group (FLAG) in all 24 of Jharkhand’s districts by the National Health Mission (NHM), in partnership with Ekjut, a civil society organisation, and the Children’s Investment Fund Foundation (CIFF). Under the FLAG programme, Sahiyas are trained to facilitate PLA meetings and encourage community members to participate in problem-solving. Using the principles of adult learning, visual tools such as storytelling, games, roleplays and picture cards help the Sahiyas to engage effectively with the community members.

The efficiency of the FLAG programme can be seen in the journey that various Sahiyas and Sahiya Sathis (ASHA facilitators) have undertaken. “Initially, I found it difficult to mobilise the community as they would jeer at my efforts”, says Seema Devi*, a Sahiya Sathi from Garhwa district in Jharkhand. “Such incidents definitely lowered my morale but I was determined to improve health issues among the community members through discussions.” With persistent efforts the community members started to appreciate and value the information she was sharing.

After a few meetings, participants found the information I was sharing to be constructive. They were able to implement and follow certain best practices such as thermal care for newborns, nutrition requirements for pregnant mothers, and many others. As a result, I was able to empower the community actors to take ownership of their health problems. Now, they are eager to seek advice from me.

Seeing improved health indicators and greater respect from local community members, the Sahiyas are now confident of mobilising the community towards taking ownership of their health issues and driving lasting impact in Jharkhand’s villages.

“PLA meetings have made it easier to mobilise the communities. Earlier, we didn’t have any picture cards, games, and other tools to engage communities. Further, we are given required training on the content of the meetings by the State Training Team (STT) and Block Training Team (BTT) of NHM Jharkhand which has helped us in our work,” says Seema Devi. She fondly remembers, “A Sahiya from a nearby village was able to convince a pregnant woman to opt for an institutional delivery for her third pregnancy, instead of delivering [the baby] at home”. Seema tells us that the woman had her first two deliveries at home and lost the babies, but that the third child is safe and healthy.

After working as a Sahiya for a few years, Seema Devi was later selected to be a Sahiya Sathi. As part of an innovative on-the-job training methodology introduced in the FLAG programme, alongside her usual role, she now handles the additional responsibility of providing training to 19 Sahiyas who work under her supervision on Participatory Learning and Action meetings. Sahiyas from neighbouring villages would attend and observe the meetings facilitated by a Sahiya Sathi, through which they can learn techniques and emulate the Sahiya Sathis for conducting meetings in their own villages. “Some Sahiyas used to be hesitant to conduct meetings, so I would visit their villages and encourage them. If and when they struggled in explaining any concepts [while conducting meetings], I used to take over and support them. Now, almost all Sahiyas are well trained,” prides  Seema Devi.

Any journey has its ups and downs, as was the case with Sahiyas conducting PLA meetings. One of the main challenges faced while implementing the FLAG programme was ensuring the inclusion and participation of every village member. For example, having realised that community members from marginalised castes were uncomfortable joining meetings in the main village, Seema Devi explained that she and other Sahiyas strategically organised them in areas where these community members reside. Facilitating meetings in the local dialect helped improve their participation.

COVID-19’s disruption to the delivery of critical healthcare services reiterated the importance of community health workers. With the onset of the pandemic, the Sahiyas were entrusted with additional responsibilities of contact-tracing, screening returning migrants, facilitating access to COVID-19 diagnostic services, among many others. This was possible because of the government and the community members’ trust in the Sahiyas’ abilities.

Additionally, PLA meetings proved to be beneficial for curbing the spread of COVID-19. “During PLA meetings, physical distancing was practised and the elderly and pregnant women were discouraged from attending them. We were able to use the meetings to bring the community together and inform them about the preventive measures such as using masks, handwashing, etc., which had to be followed. We also discussed the importance of taking vaccines, as some community members were afraid of it,” says Seema Devi. She adds, “to identify the high-risk populations for COVID-19, about 40,000 of us across Jharkhand were given the responsibility to conduct home surveys and report through the PLA mobile app. The PLA app which was used earlier for tracking data for PLA meetings, is now also being used for reporting COVID-19 cases.”

From facing challenges with mobilising the community members, being respected and appreciated, to helping them tide through tricky pregnancies and the COVID-19 pandemic, the journey of the Sahiyas in Jharkhand’s villages has seen them become pivotal actors for improving their villages’ health indicators.

Such impact demands intrinsic motivation and resolute commitment from these Sahiyas. However, added workloads, limited support from their family, and unfamiliarity with technology (such as android phones with the PLA mobile application) are some of the impediments that Sahiyas have faced in their PLA journeys. During the initial phases of the FLAG programme, there were also gaps pertaining to Sahiya’s understanding of complex health issues.

Despite these challenges, conversations with Sahiyas have highlighted that the Participatory Learning and Action module training helped them in delivering better outcomes for community engagement, which lead to improved community health outcomes. Learnings from programmes such as FLAG can help further strengthen the already robust and invaluable ASHA programme, thereby transforming the health of many families across rural India.

One Act, Three Proposed Amendments, and an Overhaul of India’s Coal Extraction

Overcoming Vaccine Hesitancy Amongst Women in the Informal Economy