“Coronavirus dies when it comes in contact with sunlight, and we are working all day under the sun. Then why do we need to take the vaccine?” asks Shanta ben, a resident of Navapura village in Gujarat. “Rehana ben in Delhi warned us saying ‘Don’t take the vaccine. It will cause infertility in you, and impotency in men!’”, she adds. These are just some of the conversations that women in India’s vast informal sector are having with regard to getting vaccinated against COVID-19. India is reeling under a “second wave” of COVID-19, with talks of a “third” wave already upon us. In this light, vaccination hesitancy amongst specific underserved demographics should have us concerned; ignoring these citizens will jeopardize the country’s drive towards universal immunization.

In fact, as an area of medical intervention, adult vaccination has been largely ignored by India’s healthcare system. Only around 2% of adults regularly get vaccinated; a majority of us may not even remember when or what the last shot we received was. Before exploring interventions to alleviate the fear and negligence with regard to taking the COVID-19 vaccine, we first tried to understand how such hesitation takes root amongst women in the informal sector.

A Picture of Hesitation

Vaccine hesitancy has significant demographic characteristics, with informal workers increasingly wary of taking the vaccine. To inform policy advocacy as well as COVID-relief efforts within the informal sector, SEWA Bharat conducted a study with 1500 SEWA members in April and May 2021 across rural and urban districts of Bihar, Delhi, Gujarat, Jharkhand, Nagaland, Punjab, Rajasthan, Uttarakhand, and West Bengal.

These members are women who are employed in the informal economy, ranging from young adults to old women. These are some basic demographic markers about the sample surveyed: 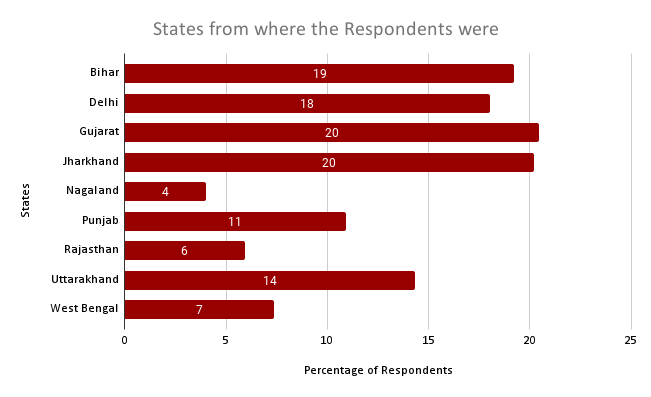 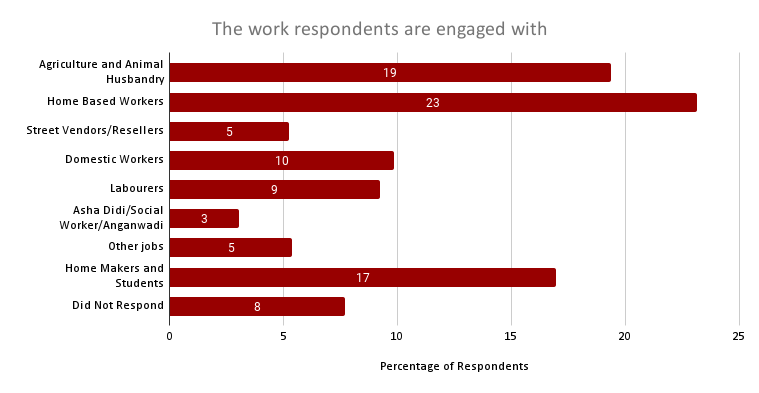 Here’s what we found. Of the 1500 members interviewed, only 17%  were actively willing to take the vaccine, while 44% of them had not yet made up their mind. None of our respondents from the states of Delhi, Punjab, and Rajasthan were open to vaccination. While more than 50% of the respondents from West Bengal were willing to take the vaccine, only 1% of those in Jharkhand were willing, which shows how pervasive this hesitancy is in the face of vaccination efforts. It also gives us a more nuanced insight into the nature of those that are reluctant, and why they may be so. State-wise findings are reflected in the graph below: 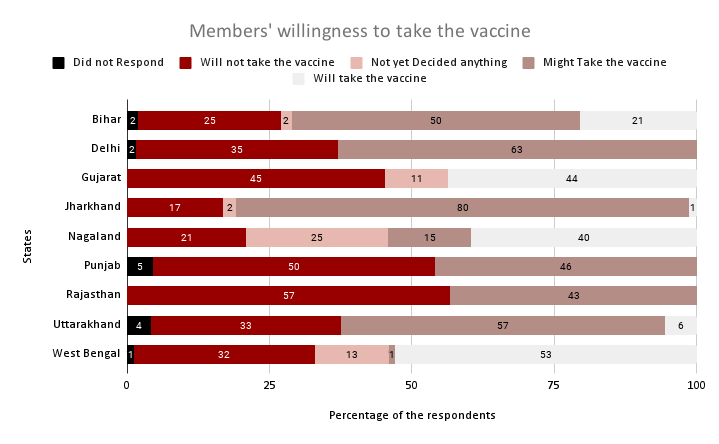 A short COVID-19 vaccine awareness survey also revealed that only 54% of the respondents were well informed* and aware about the vaccination process, including the precautionary and safety measures to practice after getting the vaccine. These are the state-wise findings of the awareness survey:

Structured surveys and conference calls with informal women workers helped us understand what their fears and concerns are, in order to better address them. The first and most obvious challenge is cognitive in nature, which is clear from the fact that these women are hesitant about the adverse effects that can follow immunization. We find that around 45% of the respondents were worried about the number of days they would be out of work after getting vaccinated.

Nearly 90% of India’s population is employed in the informal sector without minimum wage security, social security, and paid sick leave. This makes their daily wages their only source of income. Sick days post-immunization means that the vaccine is seen as a literal cost to informal economy workers; it is a trade-off to their daily income, making them choose the latter in what is already a recession that has depleted any savings they had accumulated until now. 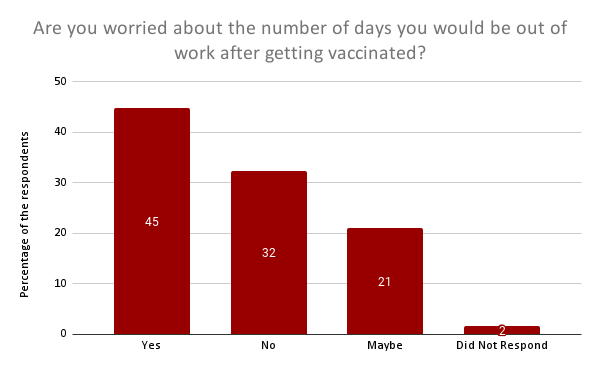 54% of respondents believed that the vaccine would impact their health negatively. “My neighbour took the vaccine and got sicker. It started with a low fever which escalated… now he’s unable to pay his hospital bills. Why would anyone want to put themselves in the same position?”, asks Radha, a housewife in Rajasthan. Renu ben, a domestic worker from Delhi confides that “[her] fear stems from hearing other people’s stories about their neighbours and relatives taking the vaccine and still testing positive… or even worse, [they are] dying in spite of having increased immunity”. The informal sector’s work demands mean that these women have no space to “see out” any potential after-effects of vaccination. This is a privilege that has not been accounted for in our immunization drive. 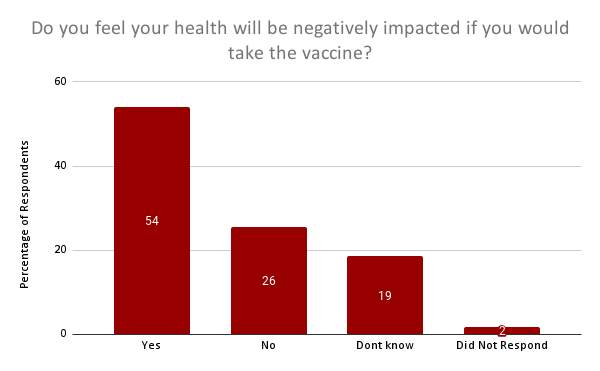 To that end, focussed group discussions also highlighted the fear of contracting the virus at vaccination centres. Respondents’ lack of enthusiasm in getting vaccinated was not helped by the fact that vaccination centres are located far away. It means that an entire day would be lost in travel, creating yet another element of opportunity cost for informal or daily wage workers.

For most women, vaccination and other health-related decisions are not a matter of personal choice, but rather something that their husbands decide. “While I am still open to the idea of vaccination, my husband is extremely against it and would not allow me to take it,” Manju tells us from a village in Punjab.

While some cognitive barriers are rooted in rationality, others stem from the prevalence of misinformation in popular discourse. 72% of the respondents stated that one of their key sources of information was neighbours, friends, and family. Coupled with internet inaccessibility, these networks of information make it difficult to verify information about the vaccine. For instance, there are multiple opinions going around about the safety of vaccinating pregnant and menstruating women. Despite preliminary data and a large chunk of research dictating its safety, rumours surrounding this danger have made their way to women across the country, thereby exacerbating their already prevalent hesitation.

Registering for the vaccine using COWIN or the Arogya Setu app is an essential prerequisite for the 18+ population. The data collected reveals that this has dangerous exclusionary effects: only 50% of the members surveyed had a smartphone and internet access.

Even for those who own a smartphone and have internet-access, the technical know-how of registration can prove to be a challenge, as The Bastion has previously reported from the informal settlements of Yamuna Khadar, in East Delhi.

So, how can we overcome vaccine hesitancy?

Given that state-level vaccine supply is directly tied to demand, we need to look at combating hesitancy amongst the informal sector at the earliest; this way, as vaccine production increases, there will be a corresponding demand which ensures that supply levels remain high.

We’ve already seen the challenges in accessing the internet and smartphones, so internet-based solutions of spreading awareness and addressing the myths and fears of the vaccine are unlikely to reach these sections of Indian society. To ensure vaccines reach the last-mile, we will have to go back to the traditional methods of public addressal systems. The internet divide can be reduced by civil society organizations, who can train community leaders with smartphones to help other members register for the vaccine using COWIN. As for fears surrounding the shot, information, education and communication interventions can be used by government actors and civil society groups. Local leaders and Panchayat members who have taken the vaccine can share their experiences with fellow members of the community, serving as evidence of the consequences of the immunization process.

Women in the informal sector lack adequate access to medical services to mitigate any potential side effects of the vaccine. “Traveling to the hospital to get vaccinated would have been almost impossible,” says one respondent who finds it easier to get vaccinated via SEWA’s health camps. Similarly, other CSOs can make similar arrangements; the government needs to bring vaccines to the people, instead of the other way around.

As for the trade-offs of vaccination, short-term and immediate interventions can be replicated from other countries that are incentivising the process. Countries like Serbia and Brazil have seen their vaccination success rate multiply after they started incentivising people with doughnuts, gift cards and $30 cash rewards. Daily wage workers (earning ₹50-250/day in India) can be given similar monetary incentives post-vaccination to ensure that they do not lose out on their day’s wages. Having subsidized health treatment opportunities via CSOs or the government for post-vaccine complications can also aid people’s decision to take the vaccine.

In more urban localities, social figures (like cricketers, perhaps) can share their experience via TV and radio to reach the masses. Whatsapp use remains prevalent across urban India; the messaging app can be used to push back against vaccine myths by reputable and verified sources. Used alongside loudspeaker announcements and radio broadcasts, a significant proportion of underserved populations will be reached in this manner.

Efforts must be made to understand the unique barriers that stand in the way of citizens’ vaccination against COVID-19. We require a set of solutions that can help break access, affordability and information barriers, especially for vulnerable and marginalized populations, as they continue to bear a disproportionate socio-economic brunt of the pandemic. The State and civil society should be encouraged to organize more mobile vaccination centres and bring the vaccines to the last mile of society rather than the other way around. Without these efforts, large sections of our population, especially women in the informal economy, will remain unvaccinated and vulnerable to this deadly disease.