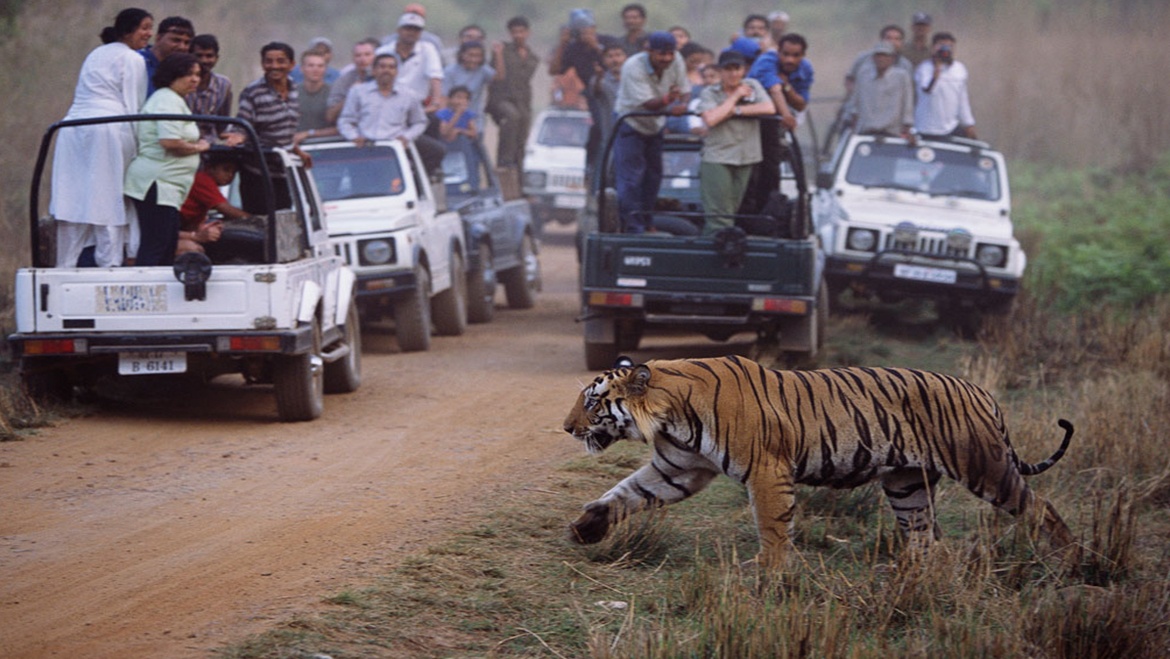 Many of us have been sharing videos and photographs of “nature coming back” in the wake of the COVID-19 induced lockdown of normal human activities. While some stories, like the dolphins returning to Venice’s canals, have been debunked as fake news, others appear to be true sightings.

This is certainly heartening because it indicates that even a short lull in the blinding, deafening hum of capitalist modernity offers some reprieve for populations of wild animals; or, at least such a lull has made us more observant and appreciative of nature. But who exactly is the ‘us’? And why does this matter?

In 1995, the environmental historian William Cronon wrote a thought-provoking essay called “The trouble with wilderness or, Getting back to the wrong nature”. Beginning with the edict “The time has come to rethink wilderness”, he said any imagination of nature as something that is far away and detached from the lives of people, i.e. as something pristine, was a mythical and flawed imagination.

He explained that historical evidence clearly indicates that most of the landscapes valued by modern society, as places of so-called untouched beauty and diversity, are actually places that have been shaped by old human cultures.

Think for instance, of the incredible plant diversity of the Amazon basin or the Western Ghats closer to home, which is often referred to as a biodiversity hotspot. In the latter case, we have evidence1 that indicates that humans began shaping these forests from the period of the Old Stone Age from about 12,000 years ago – first by hunting and gathering, later by engaging in agriculture and pastoralism (about 3000 years) and in the past two centuries, by means of large-scale forestry.

It is clear that these landscapes evolved in complex ways2 with societies and cultures who used and valued them, although not as “wilderness”. In fact, said Cronon, the idea of wilderness is of importance only to one particular section of modern society because it served as “an island in the polluted sea of urban-industrial modernity, the one place we can turn for escape from our own too-muchness.”

The “we” that Cronon was referring to is the urban-industrial citizen subject. It was the misplaced nostalgia of this deracinated, yet vocal, visible and powerful group that first triggered the demand for a network of National Parks in the USA, an invention that was subsequently exported to other parts of the world, India included3. It was intended as a place to escape to during the weekend, or romanticise about during weekdays that are strapped to the urban-industrial treadmill beset by the hectic, degraded and polluted nature it produces.

Let us pause for a minute to reflect on this moment of creation and the willing into existence of this imaginary, pristine nature where tigers (or pick your favourite fantasy!) roamed free. It was the imagined opposite of and an escape from what we had made of nature. A nature that was reproduced as a lifeless shadow of itself across vast urban-industrial landscapes by humanity’s pursuit of power, productivity, profit and progress on an industrial scale and in patriarchal style. We made mines, roads, cities, suburbs, industrial farms, large dams and power plants of this nature.

The national park system manifests this imaginary Other Nature. It stands on a fiction – a white lie, if you would – that there is another nature out there. Forgetting that it was a convenient lie, many experts believe and act as if there was indeed another nature out there. They repeatedly push for creating landscapes where nature is to be free of humans, framing national parks to be legally declared as inviolate spaces.

How tragically ironic it must be to be displaced from your ancestral land because you practised production systems and lifestyles that allowed, relatively speaking, a continued co-existence of biological diversity. And because you did not deplete the land you lived on, unlike your urban-industrial neighbours, you are forced to make way to create national parks for their atonement and reprieve.

Instances of this tragic irony continue to make their way into the news during these COVID-19 days. As reported, a few weeks ago the National Tiger Conservation Authority, banned human movement in all 50 of India’s tiger reserves. This step was taken following reports that tigers could be infected by the novel Coronavirus transmitted by humans. The immediate human consequence of this step has been that the livelihoods and food security of these forest-dwelling communities, which are based on their access to the forests, has been undermined. They are reduced to dependence on handouts from the Forest Department.

In the same vein, there have also been news reports of a “surge in illegal wildlife trading amid the lockdown”. Could it be that the tragedy of the “migrant labourer” unfolding daily on our smartphones and televisions has something to do with this?

Illegal wildlife trade is certainly a serious crime and threat. It is estimated to be a multi-billion dollar global criminal enterprise. Perhaps the recent surge has something to do with the unprecedented economic distress and resulting food insecurity faced by rural and forest-dwelling communities who now also have to support distressed kin returning in droves from the uncaring cities where they laboured.

That such desperation has arisen is itself an indictment of how citizens who migrated to our cities to build and maintain them are treated. However, even these days, it is not uncommon in “wildlife circles”, to hear that the Forest Department ought to step up its surveillance and enforcement measures. What should people rejected by the cities they built do? Should they starve? Or should they hunt a wild animal to eat or trade? This is a tragic situation, but it is one we made.

“Protecting 5% of the country for Nature”

It is easy to believe that protecting wildlife is about keeping them safe in a distant, pristine nature.

More than twenty years ago, as graduate students of wildlife science and ecology, we often heard a question: why not protect 5% of the country’s landscape only for wildlife? What’s wrong with protecting this small percentage of the country as inviolate spaces?

It was indeed a powerful question that was being asked by powerful people. And lo, even today, amidst these COVID-19 days, a full generation of graduate students later, this question continues to be asked, even rhetorically.

The issue here is not whether manifestations of nature as wilderness need to be cared for or not. They do. But there are two grave flaws with the question. The first was alluded to in the above examples, wherein the lives of forest-dwelling communities are instrumentalized as cogs for servicing a nature that was imagined into existence by “us” – the powerful urban-industrial citizen subject. It is simply not justifiable to treat fellow citizens this way.

Also Read: Involving Local Participation: What the EIA 2020 Could Have Done

The second flaw is more easily communicated as a question. What happened to the remaining 95% of the country? How was it that this vast swathe of once life-affirming nature was reproduced as a degraded shadow of itself? It is the pursuit of the aforementioned “power, productivity, profit and progress on an industrial scale” that is responsible for this degradation. Imagining a pristine nature out there allows us to overlook the fundamental incompatibility of these pursuits ad infinitum with any imagination of a life-affirming nature.

Instead, the focus remains on studying a particular impact of an infrastructure project and managing it, or fighting a particular development project such as the coal mining that has been sanctioned in parts of the Dehing Patkai Wildlife Sanctuary. The proximate, the immediate and the microscopic dominate the field of research and preoccupy advocacy. Indeed, these are valiant and important efforts at firefighting. Yet, this tends to be largely symptomatic treatment and fails to produce or reproduce a life-affirming nature. For example, consider this statement from the 2019 global assessment report of the Intergovernmental Science-Policy Platform on Biodiversity and Ecosystem Services (IPBES): “global rate of species extinction… is already at least tens to hundreds of times higher than it has averaged over the past 10 million years”.

You May Also Like: The Art of the New Wilderness

We need to go beyond our myopic fixation on national parks and imaginary getaways. The wildlife conservation community and their funding agencies need to engage, study and contest the structures that have institutionalized the unrelenting and unjustified pursuit of power, productivity, progress and profit at ever-accelerating rates. It is through these structures and the contestations they represent (i.e. politics) that Nature – the only nature that you and I and all of society are interwoven with – is produced and reproduced, daily.

Instead, when our enthusiasm for saving nature has been translated into action, it has inevitably been directed not at curbing these structural commitments, i.e. the political economy of unthinking and exploitative production and consumption – whether of goods, or services, or landscapes – but at “managing” rural or forest-dependent communities, whose ecological footprint is a fraction of the urban-industrial citizen subject. We, and Nature into which we are all interwoven, remain hostage to this flawed imagination.

The authors are faculty at the School of Development, Azim Premji University.

[2] Toward a Political Ecology in Early South India: Preliminary Considerations of the Sociopolitics of Land and Animal Use in the Southern Deccan, Neolithic through Early Historic Periods. ANDREW M. BAUER, PETER G. JOHANSEN and RADHIKA L. BAUER
Asian Perspectives, Vol. 46, No. 1 (Spring 2007), pp. 3-35

One Health: The Need for Intersections Between Human, Animal and Environmental Health