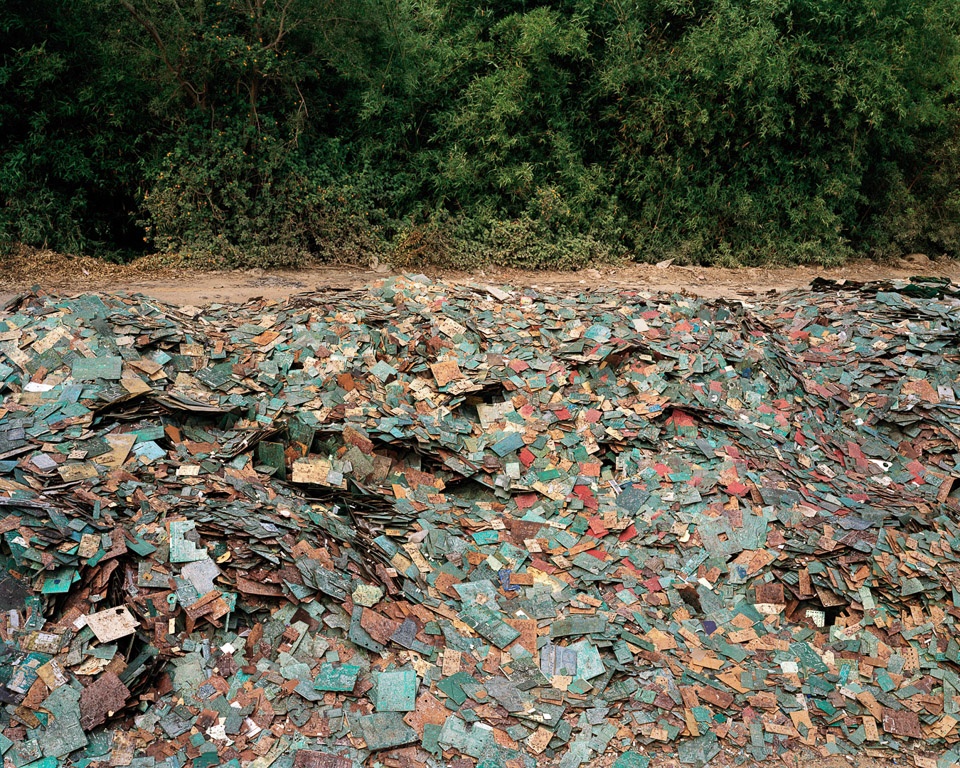 Edward Burtynsky’s astonishing photographic series China Recycling maps waste. In them,  he provides a frightening visual reminder of a civilisation – human, that is – given over to producing mountains of waste and people wasted from self-indulgent consumption.

As I have argued elsewhere, “Burtynsky’s fields of waste are metaphors for cities that may eventually be rendered into waste, where it will be difficult to distinguish between cities that once produced waste, and wasted cities.”

Yet if Burtynsky monumentalises waste, the Barcelona-based Francisco de Pájaro in his Art is Trash series aestheticises trash differently: he paints faces and bodies on and around garbage and trash-heaps–his surfaces include abandoned mattresses and also objects like shopping carts.

In spite of their differences in approach, both these artists clearly herald a certain kind of “ecoaesthetics” built around trash. This aestheticisation of trash scrutinises the ways in which humanity has lived and assigned value to objects.

Currently, trash marks the border between the inside and the outside (since we throw trash out, because we cannot keep it inside), and thus between civilisations and wastelands. These ecoaesthetics trouble this border by showing how trash is what we as a civilisation produce.

De Pájaro does not bring trash indoors into studios (like Mark Dion does) to make artwork: his canvas is the street. He etches emaciated figures on the pavement, aligned with and conjoined to the discarded mattress or whatever object of his choice at that point. In a commentary on De Pájaro, Mark Zubiaurre writes:

“De Pájaro’s art forces us to confront the truth of the physical and moral enormity of refuse head on. It teaches us to look garbage straight in the eye and identify it for what it is, namely, the massive and destructive consequence of boundless consumer greed.”

De Pájaro etches emaciated figures on the pavement, aligned with and conjoined to the discarded mattress or whatever object of his choice at that point. In contrast to De Pájaro’s sharply circumscribed, and minimalist, trash-art, Burtynsky depicts mountains and seas of landfills (think of the skyscraper-level trash in Wall-E). If Burtynsky is all about expanse, and trash stretching to the horizon, De Pájaro is about low-level visuals.

Now, when it is unsafe to go out even to throw out the trash, taking time off to look at these artists shows us a different picture of the city-space as we know it.

As Zubiaurre further notes, the objects that De Pájaro employs as part of his artwork are eventually taken away by garbage trucks, leaving behind these painted figures on the ground. If the trash itself is ephemeral–since trash is taken away–so is the art, implies De Pájaro. On the other hand, Burtynsky focuses on the long life of trash collecting in landfills.

What these approaches imply is that trash, and then waste (the two are not synonymous) come at the end of a process: of consumption. They mark the passage of time to when things no longer possess the same use-value as they originally did.

So, the artists tell us that these objects have their own temporal frames.

De Pájaro’s art shows how discarded objects play a sustained role in the lives of the urban poor who make a livelihood out of it, be it in terms of food, clothing or shelter. This is evident enough to us as houses built from scrap and trash are a common sight across India (see Jeff Ferrell’s The Empire of Scrounge). On the other hand, Burtynsky’s mountains of electronic chips, computers, and such await recycling, but until then, exist in a timeframe where they are no longer determined by their use.

So, something that has supposedly run its course, and therefore has to be rejected, remains woven into our cities’ lives thanks to our economic systems of productivity and profitability.

Trash, which then has to be cast out, like unwanted people and the poor evicted urban poor, is not ‘outside’, as a consequence. It lies at the centre of our engagement with our unequal hierarchies and urban ecologies.

Trash and the Foreign

Trash, in most contexts, is seen as insidious and ‘unappealing’. It’s value is only considered when commercial and industrial profits can be obtained from recycling ‘waste’. Yet this ignores the centrality of trash in our current civilisations.

Trash is integral to human lives. It is produced within and by our ways of life. And yet, trash becomes foreign after a point–it is something to be thrown out.

When De Pájaro and Burtynsky reinstate trash as artefacts, they foreground how “foreign” trash is not necessarily alien: it came from within our lives, cultural practices, and attitudes. They show us that trash doesn’t always go away as a foreign object. It stays, circulates, and recirculates in some form: recycling is the return of the foreign to become a part of our lives once again.

Visual theorist WJT Mitchell argues that “Images are active players in the game of establishing and changing values. They are capable of introducing new values into the world and thus threatening old ones.” So, if waste, as Susan Signe Morrison puts it, “has meant desolation, pointlessness, and uselessness, but also excess and surplus,” then De Pájaro and Burtynsky’s images and ecoaesthetics tell us that these are the consequences of certain values humanity has adopted for years, only to produce unquantifiable and unconscionable amounts of trash.

Trash thus writes a history of a value system.

So, uncollected trash–a visually and olfactorily offensive state–becomes unacceptable precisely because it is now foreign to us. This tells us that trash clearly marks the border between the inside and outside in this modern world. Once thrown out, trash should no longer be visible or smellable. For garbage to be uncollected means that the line between inside and outside has been blurred.

Trash’s life then also runs alongside that of the poor. Just as the poor, who in many cases survive on the trash-economy, are outside the imagination and cast out of the frame, trash too is rendered foreign.

In this framing, trash again becomes wild, offensive, foreign, and must be regimented and destroyed before it consumes us. In the ‘hygienic modernity’ (Ruth Rogaski) of the contemporary, we can keep the city safe by refusing the foreign (which is, of course, refuse).  To cleanse a city we need to ensure that we are not assailed by either the poor or by trash, by sight or smell: we have to expel them as foreign.

We value only what we classify as internal and essential to our lives: neither the poor nor trash are valuable. Hence, they become disposable lives, alienated, rendered foreign, and outcast.

Let us now turn to something extremely foreign to our visual perceptions of the city: empty cities in the age of Covid-19. If Wall-E was haunting due to its skyline of trash, if Burtynsky and De Pájaro show us trash as filling spaces, what do we make of the New York Times’ The Great Empty series of photographs of deserted metropolises around the world?

The series is haunting in a different sense: it shows cities whose lifelines–transport, energy, and mobility–appear to have thinned out, or been invisibilized. If the artists under discussion seek to monumentalize waste, The Great Empty renders the cities as monuments devoid of human life: wasted cities, in effect, since we cannot use these spaces as we once did.

Then, we read in news reports about how animals and birds are returning to cities now devoid of people, pollution, and predators of the two-legged kind. A new wilderness, the city, has been inaugurated.

Rebecca Ranglon speaks of a ‘postnatural wilderness’, or “dangerous areas where humans are excluded … human exclusion from these areas that makes them wilderness reserves.”

In 2020 with the arrival of the foreign, a piece of protein in a jacket, so to speak, familiar cities are now postnatural wildernesses: emptied of humans who cower behind doors, afraid of the air they have to breathe if they step outside.

Humanity hides precisely because an invisible foreign object has trashed civilisation on an unprecedented scale. If humans produced waste–and along with it, the wasted lives of the urban poor, migrants, and others who are ‘produced’ by the social and economic conditions of cities lacking social safety nets and welfare measures–the empty cities imply that the foreign has come to waste or exclude us, inducing decay, deterioration, and death among humans.

In Paula Cocozza’s How to Be Human (2017), a fox befriends Mary, living in the heart of London. Their first encounter alerts her to the illusion of mastery humans have always had:

In a single visit he had acquired an air of permanence, as if he had been here yesterday and would be here again tomorrow …

His very presence, his solitary sit-in on her lawn, seemed to dispute something. Her right to be there. The supremacy of humans.”

Cocozza is mapping an urban life bordering a wilderness. And the ecoaesthetics of De Pájaro, Burtynsky, and The Great Empty are terrifying reminders of how unequal urban ecologies have evolved. Ecoaesthetics tells us: we have been running amok for a while.