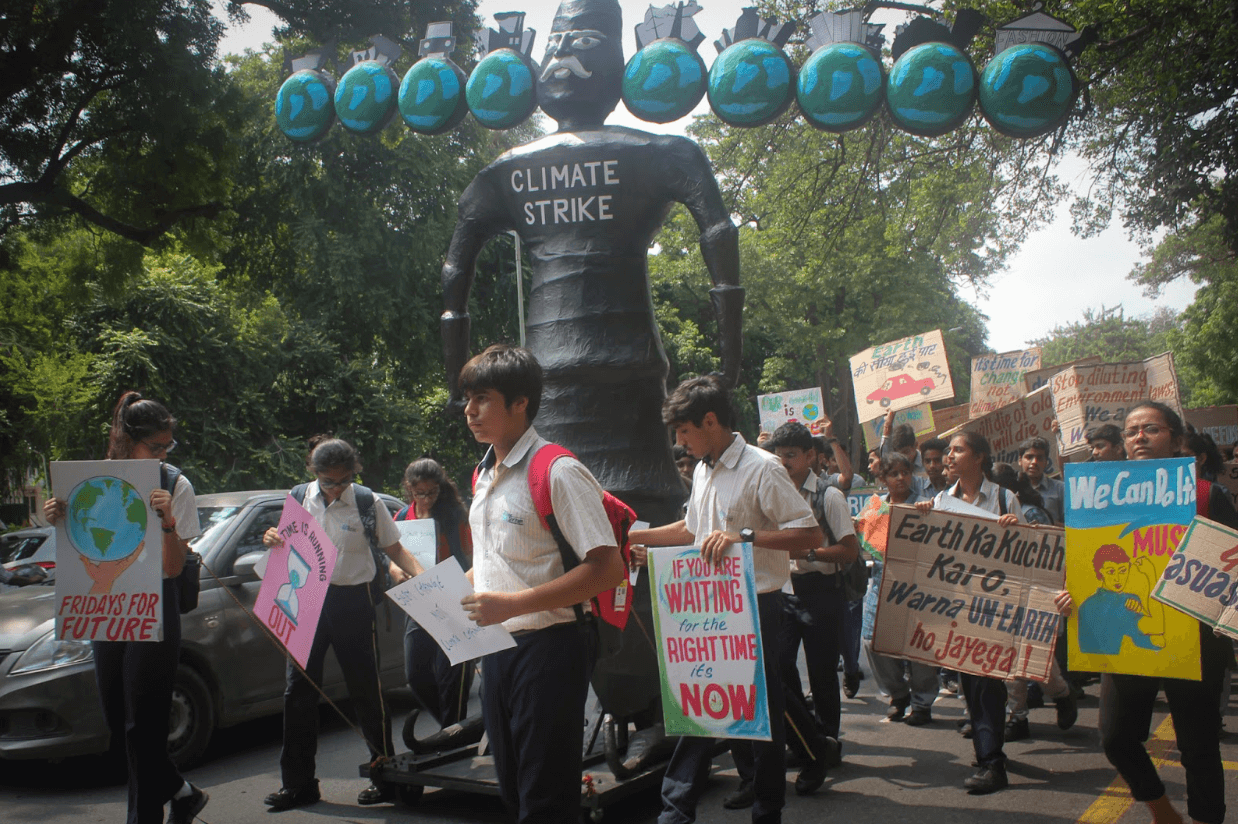 Dusshera is around the corner. In that spirit, on a sunny morning last Friday, a life size Raavan made its way with a convoy of students marching up till the Ministry of Housing and Urban Affairs in Central Delhi. He moves across the street to another group of students, teachers, and concerned citizens chanting slogans and holding banners. But there is something different about this Raavan. His other 9 heads are the planet earth, adorning different crowns — industries emitting pollution, fast fashion, deforestation, heavy transport — all contributors to the ‘real’ Raavan of our times: Climate Change.

20th September, 2019 marked the beginning of the Global Climate Strike where students missed school on Friday to demand action from the government. This was in response to the call of Swedish teen climate leader, Greta Thunberg, who asked people of all age groups to participate in the strikes on days counting up to the United Nation’s Climate Action Summit, which kicked off on September 23rd.

Not Just Another Protest

A ten year old girl standing in her neat school uniform screams “There is no Earth B!” at the top of her lungs, with an intense expression of urgency. She seems angry. Worried. Anxious. Most of the young students were armed with not just placards, posters and slogans, but also a strong want to protect their future. “They really are so emotionally attached to the cause,” says Ms.  Aparna, a teacher at Manav Rachna School, Gurgaon. “One time, after a brief discussion on plastics, a student came to me with a very worried expression and asked where he could throw his tiffin box, because it was made of plastic! He was in a dilemma because he wanted to stop using it, but knowing that plastic would not decompose, he did not know what to do.”

This is not to say that they were unaware of the technicalities. “The moment we step out of home, there is just so much of smoke!” says Keiyona, a class 5th student of the same school. “We have stopped burning crackers for Diwali. But we have to choose measures like carpooling and using public transport more frequently.”  Her classmate Sanya chimes in, “We are trying to reduce our use of air conditioning at home, it releases tons of CFCs gases which is contributing to global warming.”

So how does climate change, environment degradation and waste management becoming such a strong part of their consciousness?

Sanya answers the above question, saying “We have an annual project where we can choose from many topics like clean and affordable energy, waste management, etc.” Keiyona adds excitedly, “We get to go to a dump yard! There we learn all about waste disposal and management.” Akshat, also a student of class 5 at the same school, speaks about the many debates that his school organises on topics like climate change and environmental pollution.

Ms Aparna adds, “We are in the process of introducing a course on sustainable development right from Kindergarten to class 8th.” Having such a subject for constant company, where students get to go beyond the four walls of their classroom and into the everyday reality, is bound to etch the crisis into their minds.

Teaching such aspects in schools not only brings the students closer to the issue at hand, but also changes the climate conversation at home. A recent study found that having such subjects to study can alter the parents’ concern over the issue as well. In fact, previous experiments have shown that educating kids can spur changes in parents’ recycling habits and energy-saving behaviour too.

While climate strikes were taking charge world over, the Swiss attracted attention to their dying Pizol glacier through an innovative measure: a funeral. Dozens of people, many dressed in black took part in the funeral march, after scientists remarked that the glacier lost at least 80% of its volume just since 2006.

Hundreds Attend Funeral For Pizol, A Disappearing Glacier: On Sunday, more than 200 people paid their respects at a ceremony to mark the “death” of the glacier in the Swiss Alps. Researchers say it’s disappearing due to rising temperatures. https://t.co/NdNgti7FSy pic.twitter.com/viCwnmElX8

Here in Delhi as well, the children at the strike donned their creative hats to press for solutions.  Prakhar, a class five student says, “If I were a leader of my country, I would ask everyone to plant at least 10 trees. And I would then ban builders from any large construction activity for a year till those saplings can grow a bit.”

Keiyona plans to use all the plastic polluting the oceans to create new articles of use. Knowing that the next generation of start-up operators, consultants, or policy makers might emerge from them, a continued creativity, consciousness and sense of curiosity will keep the momentum going.

But Where is the Diversity?

While the climate strike was an interesting insight into the minds of the young on their perceptions of climate change, the problems and solutions, it was an insight into the minds of a partial group. The disproportionate participation between private schools and government schools was evident; missing a day of school is a privilege that not everyone can afford. If we need a broad coalition of student-environmentalists, we would need to reach beyond the sharp boundaries of class inequality so that all aspects of climate change are spoken about.

This gap could be seen through the selective aspects of climate change that were given attention at the strike; the predominant villain was plastic.  “It is just everywhere,” says Maydha of Sriram Millenium School. “It’s on the roads, the dumpsites, and even on the trees! It needs to go.” This is not to say that plastic is not a concern; Maydha’s worries reflect in a report published in May this year which remarked that plastic contributes to greenhouse gas emissions at every stage of its lifecycle, from production to refining and to the way it is managed as a waste product.

While the plastic problem needs to be addressed, the other aspects of climate change like rural impacts, biodiversity loss or migration due to environmental crisis ought to find an equal space in conversations. This is more likely to happen when these social divides can be conquered to some extent. The global call must localise itself for more diverse participation, and to become an effective umbrella for all things climate change related.

Chants of “What do we want? Climate  Action! When do we want it? Now!” fill the street.  A police man walks over to usher the students away from the traffic on the road. He has been around for a while now, and looks at me and says, “Apne liye thodi kar rahe hai ye bache, apne agey ki pidiyo ka bhi khayal kar rahe hai, (They aren’t doing this just for themselves, but also for the generations to come). I smile in agreement. 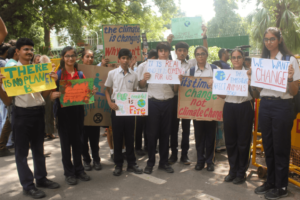 The next generation is here, environmentally conscious and emotionally charged, standing up for the future they believe they deserve. If Greta Thunberg’s speech at the UN summit is anything to go by, lawmakers, governments and essentially those in power would do well to understand the urgency with which we need to accept and address climate change. Maydha adds, “If our strike today reaches the ears of the government, it will be a small tide in a very big sea of change required.”

From the side of the road, the Raavan looms over, waiting for his imminent death.