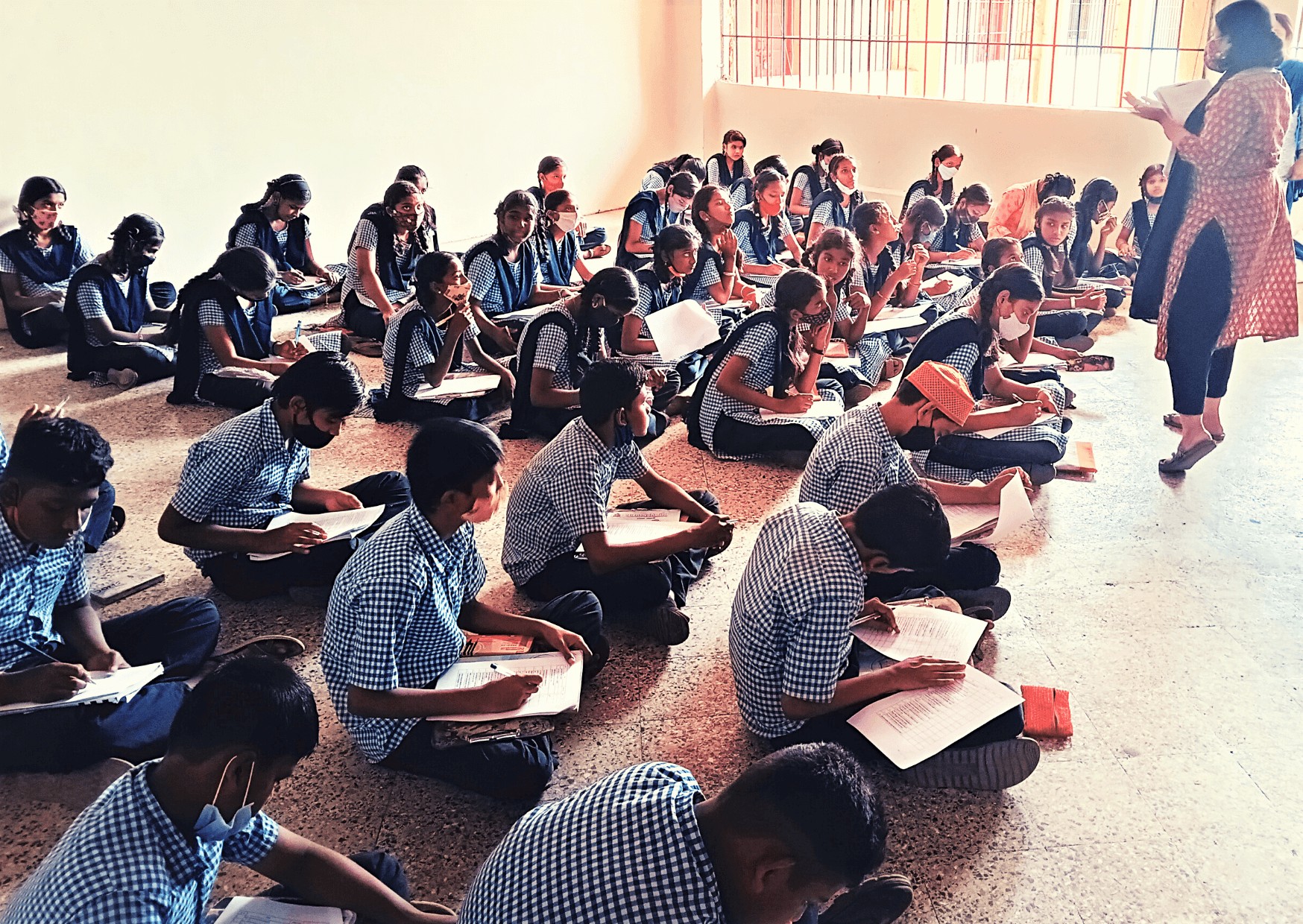 Over the past few months, the concept of student well-being has taken centre stage. The growing body of research suggests that Social-Emotional Learning (SEL) skills help in foundational academic and personal growth, as well as, play a significant role in the holistic development of children. This has now led to increased emphasis on SEL among various stakeholders in the education sector—schools, both public and private, teachers, parents and the government administration.

This increased focus on social and emotional well-being, an aftermath of the pandemic, has highlighted and exacerbated the challenges faced by children. It is not that the needs were felt as a direct result of the pandemic, the National Education Policy 2020 also places emphasis on SEL.

Presently, several schools and non-profit organisations are driving programs and interventions focused on SEL. In Maharashtra, the Foundational Literacy and Numeracy (FLN) program of the State Council for Education Research and Training (SCERT) has also expressed interest in understanding and building SEL competencies among students, particularly at scale. This growing interest among government stakeholders and teachers to introduce SEL in public schools’ classrooms is a much needed and welcome development. However, to make SEL a success in schools, it is important to translate data into insights while designing programs aimed at building SEL competencies among children.

Last year, in 2021, teams at Pune-based Leadership for Equity (LFE), a systems change and research advisory organisation that aims to improve the education quality of government schools in India, and FLAME University, came together to devise a better SEL measurement mechanism.

Leadership For Equity, in collaboration with Dr. Shalaka Shah and Dr. Shivakumar Jolad of FLAME University, have created a tool in Marathi language to measure Social-Emotional Learning (SEL) competencies in students of grades 6-8. The process of creating this tool spanned from September 2021 until January 2022. It involved creating an assessment scale and reviews after which in January 2022, data was collected across four districts for two months. The learnings based on this tool’s initial implementation could prove to be helpful for organisations looking to introduce SEL assessments at scale.

While multiple Social-Emotional Learning (SEL) assessments have been developed in the context of the global North, there are very few that are appropriate for the context and languages in India. Some examples include the Life Skills Assessment Survey by Dream a Dream and the SEL component of the ASER 2019 ‘Early Years’ scales. These are valuable resources to measure program impact or individual growth of students or map basic competencies in younger children with the help of situation-based questions respectively.

While these assessments exist and are valuable, there is no assessment yet that maps all SEL competencies as per a validated framework—a framework that can be implemented at scale and in Maharashtra’s schools. This is what led the research team at Leadership for Equity (LFE) and FLAME University’s Dr. Shalaka Shah and Dr. Shivakumar Jolad to develop a tool, called the Student Well-Being Scale, in Marathi. The tool is based on the Collaborative for Academic, Social, and Emotional Learning (CASEL) framework that can document students’ well being and provide data-based insights to support systemic efforts that combat the adverse effects of COVID-19 related school closures.

The Student Well-Being Scale (SWS) is developed for grades 6-8 and is a self-report measure with 28 items mapped to the five competencies highlighted below. The students can record their responses on a 3-point scale—‘Never’, ‘ Sometimes’, ‘Always’. 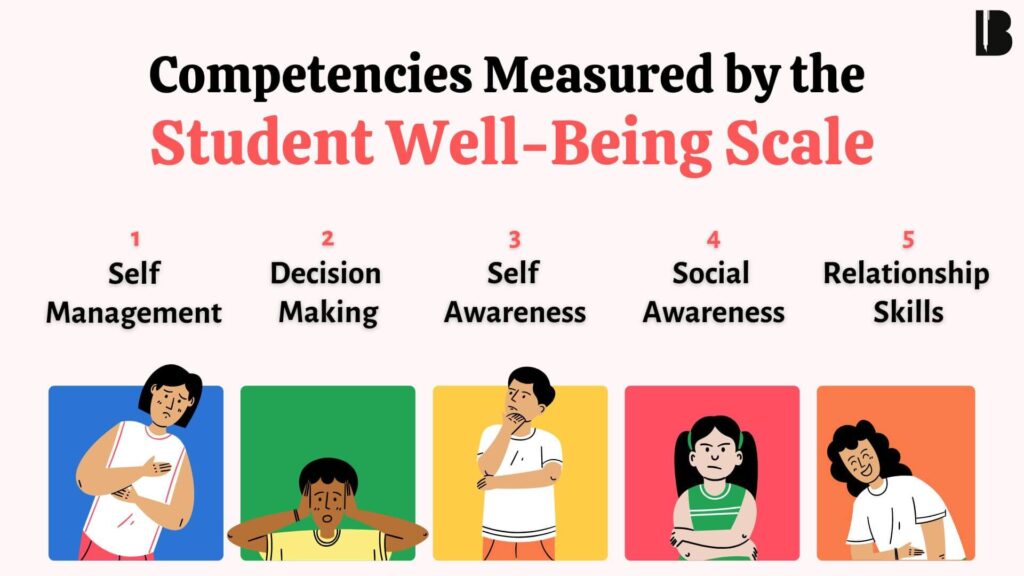 This scale was implemented across five jurisdictions in Maharashtra—Akola, Nashik, Nagpur Municipal Corporation, Pune (Zilla Parishad), and Pimpri Chinchwad Municipal Corporation (PCMC). Approximately 1,900 students from Marathi-medium government schools were surveyed across the aforementioned jurisdictions. The items were first curated and developed in English, and underwent multiple rounds of language checks after translation into Marathi by education practitioners, academicians, and a child psychologist. The scale contains a Focus Group Discussion (FGD) component, with 5 items where each item corresponds to an Social-Emotional Learning (SEL) competency. This was used as a dipstick measure [a form of measurement used to gauge approximate conditions] to better understand and substantiate the quantitative data collected.

The Challenges and Way Ahead in Using Data to Improve SEL

Designing a Social-Emotional Learning (SEL) tool like this is far more complex than how it appears. At the heart of such an intervention are the children and schools, all of whose realities and needs vary. Over the last few months, the teams at LFE and FLAME University have reflected on the observations from the field and overall experience. Here are a few critical insights gathered from the field while developing the Student Well-Being Scale (SWS) tool.

Choosing competencies: One of the preliminary steps of tool creation is deciding the competencies to be measured. This is particularly challenging for an indicator like SEL given that it is difficult to define and quantify. We compared the competencies highlighted in the National Initiative for Proficiency in Reading with Understanding and Numeracy (NIPUN) Bharat guidelines released in 2021 with the CASEL Framework and picked overlapping competencies and sub-competencies.

Accounting for cultural context and lived realities: Each item on the scale was a statement that the children recorded their thoughts and self-perception. While adapting items from other scales or creating them, it is crucial to design them in a culturally relevant and age-appropriate manner. For example, a common item to measure anger in international scales designed for older adolescents or adults asks participants about their response when someone disagrees with them. However, a much more contextually appropriate item would ask children about how they respond when they are teased or provoked.

The difficulty in building a rapport: It is particularly important to build a rapport and comfort with the students before starting the assessment. Tool items may ask for vulnerability on the child’s part. Further, for many children, it could be the first time they are answering questions about their feelings. Playing a simple game and talking to the children becomes an important step, as does setting norms that emphasise that this assessment is not a ‘test’ and sharing the purpose of the assessment with them.

Ensuring more representative learning: Apart from the 28-item scale, children were asked five questions during focus group discussions (FGDs). Representation was ensured in terms of an equal male-female and grade-wise ratio among the participants in each FGD. Three FGDs were conducted in each jurisdiction. Students were notified that a safe space had been created, which led to some wonderful reflections. For example, while talking about how they feel when any member of their family is facing a problem, the children say that they feel sad, guilty, and helpless, and “wish they could be bigger”, as parents often tell them that they are too small to help.

Children process information differently: During the implementation of the assessment, we realised that tool items in the form of statements were not as effective in our context, as children were not habituated to understanding a statement and reflecting on their responses in terms of a frequency scale. The statement usually had to be broken down into a question by the facilitator, which took some time. After our round of implementation, we reframed the statements as questions and modified the response scale for each question such that it specifically answered it.

For example, a statement version was “When I feel sad, I do something to cheer myself up” against a response scale of always, sometimes, and never. An updated form would read, “When you feel sad, do you do something to cheer yourself up?” against a response scale of “I always do”, “I do, sometimes”, and “I never do”. Another key learning point was that despite checking the language at various stages and conducting a pilot in PCMC, we should have also accounted for dialects and the level of Marathi comprehension.

Given that this tool is one of the first few tools to measure SEL competencies in schools in our context, it is important for the tool to keep evolving. After assessing around 1900 students, this assessment was again implemented with approximately 800 students; this new version evolved based on learnings from the field. The tool still has a long way to go in terms of being validated, and the process of constantly learning is an important step along that way.

SEL is an indicator that can be interpreted in multiple ways which impact the tool creation process at each stage. Deciding which competencies to be included, accounting for language and cultural contexts, and picking an appropriate facilitation style are all functions of the way SEL is interpreted. Further, it takes time to be validated and checked for reliability.

Salil Pol, Senior Advisory Associate at Leadership For Equity (LFE), who is supporting SCERT through LFE’s advisory program, shares that there is an understanding among officers that student well-being must be given importance, and a will to act, but there is a lack of evidence that could shape any large-scale program. Salil says, “They [government officials] are keen on understanding what an SEL assessment could look like, and studying what the data it brings forward could showcase.” Given the urgency and need for data that could help deepen the impact that SEL programs create, it is important for organisations to come together to accelerate the process, and to ensure SEL programs achieve their full potential for our children.

Featured image is of students at Pimpri Chinchwad Municipal Corporation school interacting with the facilitator while participating the SEL baseline survey; Image courtesy: Leadership For Equity