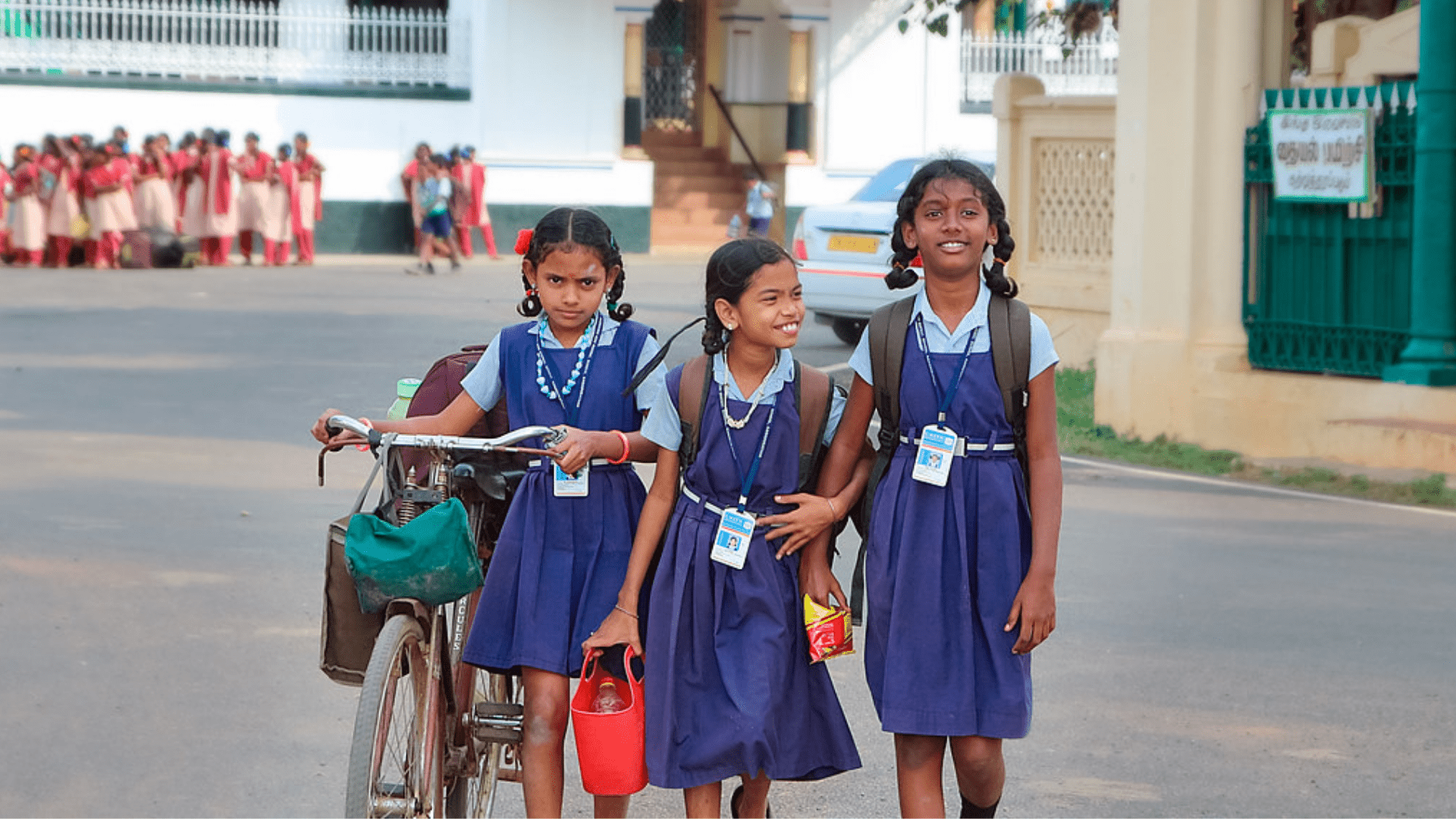 The Pradhan Mantri e-Vidya scheme was launched by the Central Government in May 2020 in response to the pandemic-enforced school closures and shift to digital education. PM e-Vidya entered the spotlight once again in February 2022, two years after its launch, when the Finance Minister announced that it would be expanded to better serve the needs of Indian students. Even though the announcement was made with grandiose, a mere ₹1,00,000 has been allocated in the budget towards the PM e-Vidya scheme.

“We recognise the need to impart supplementary teaching and to build a resilient mechanism for education delivery”, Nirmala Sitharaman commented at the Union Budget session 2022. It is only upon a closer look that one realises just how accurate the Finance Minister’s words are. When compared to the original design of PM e-Vidya, its subsequent ‘expansion’ seems like political grandstanding, only going so far as to signal that the government recognises that such a platform for online learning is needed. However, the actual act of imparting said supplementary teaching and building its digital infrastructure is another question altogether.

What is the PM e-Vidya Scheme? 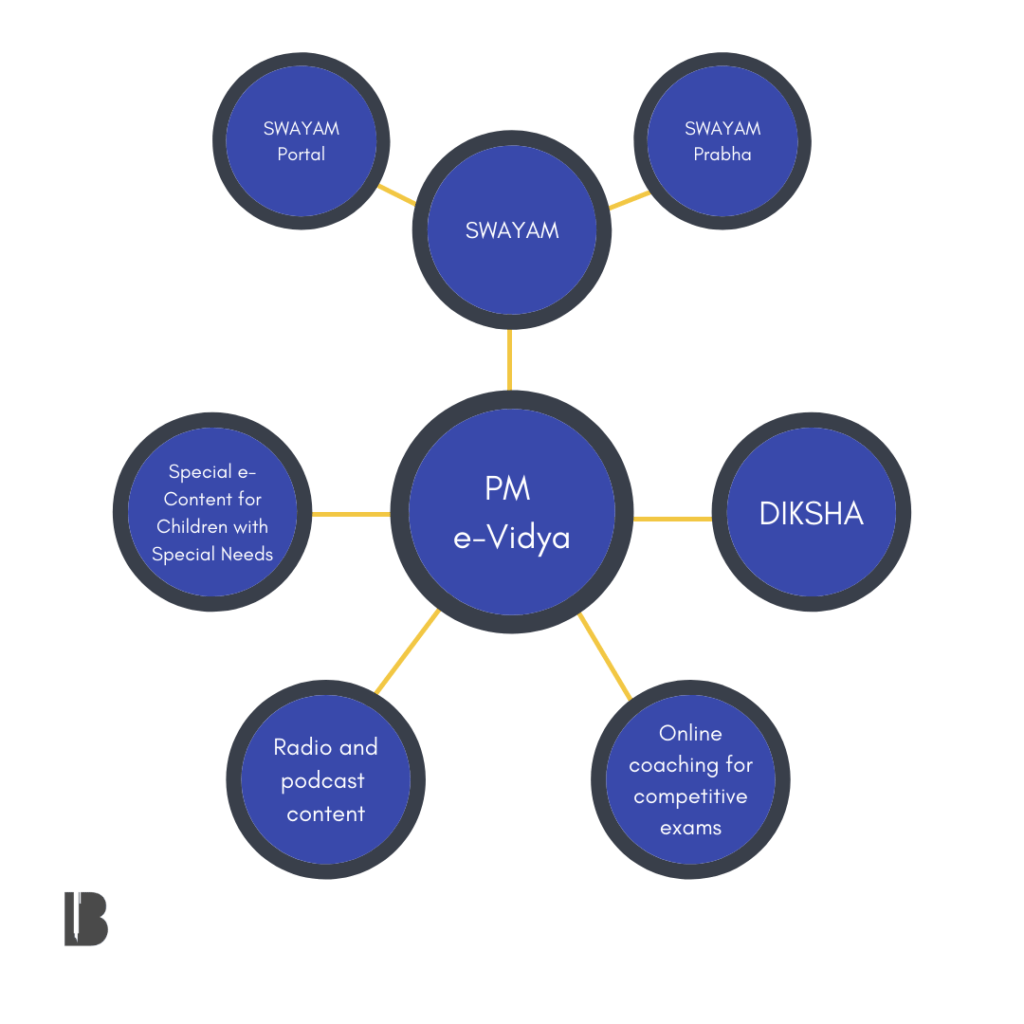 The central goal of the PM e-Vidya scheme is neatly packaged and pops up when you visit the website. The initiative unifies digital/on-air access to education and boasts that it will benefit over 25 crore school-going children. It attempts to achieve this goal via six initiatives (pictured above), most of which are christened with a nifty name that signals their purpose.

The Digital Infrastructure for Knowledge Sharing (DIKSHA) claims to house a number of e-books, interactive content, and textbook content created by state and Union education bodies such as NCERT and state education boards. In order to fulfil the content needs of such a platform, VidyaDaan was initiated to encourage individuals and organisations across the country to contribute e-learning resources to DIKSHA. However, as of March 2022, the VidyaDaan contributions are nowhere to be found on the DIKSHA website. It is also worth noting that the textbooks that DIKSHA hosts were already available on each board’s website for free.  Without such content, one begs the question – what value is DIKSHA adding beyond consolidating resources that are already available online? Not to mention, the DIKSHA website is arguably harder to navigate than other websites that host the same content, as The Bastion has previously reported.

The second initiative of note is the Study Webs of Active Learning for Young Aspiring Minds (SWAYAM). SWAYAM has two initiatives under it that appear excellent at face value, but are muddled with problems. The SWAYAM Portal contains higher education material that has been collected from government institutes across India. Under SWAYAM, SWAYAM Prabha TV Channels, house the ‘One Class One Channel’ initiative. These TV channels broadcast supplementary material for students in regional languages, with Sitharaman announcing that the channels would be made available in a whopping 200 languages in the coming years.

‘One Class One Channel’ is a commendable effort in making subject-wise lessons accessible to students across rural India who might have lost touch with formal schooling entirely. While the lessons are often too surface-level in their instruction, the content is delivered in a succinct manner, suitable for engagement over short periods of time across a day. The telecast has been scheduled in a manner to allow students to revisit lessons later in case they missed a few programs. Although the lessons themselves are well-produced, the entire learning process is one-sided does not include any form of checks or assessments.

The SWAYAM Portal, on the other hand, does not have many positive aspects. The success of the Portal hinges on collaborators like IIMB, UGC and IGNOU uploading courses onto the platform. But of the nine collaborators, six have no upcoming courses as of March 2022. Among the remaining three initiatives, one highlights the usage of radio and other audio-based content such as podcasts, to disseminate lesson and course material. The efficacy of these initiatives remains questionable- especially the impact of audio-only learning. However, it is an improvement over nothing as it benefits marginalized students who lack access to the internet and TVs. The IITPal (IIT Professor Assisted Learning) and eAbhyaas initiatives for preparing for competitive exams are similarly well-structured and coherent and can benefit those unable to access formal tuition and coaching.

The final, and perhaps the least well-designed initiative, is the ‘Special e-Content for Children with Special Needs’. Although the page was built for students with visual and auditory disabilities, it is no different from the rest of the e-Vidya site. The inaccessible design of the page renders it difficult for students to use. The claim that content for visually challenged learners has been standardized by the Digital Accessible Information System (DAISY) on the DIKSHA app does not seem to be true.

DAISY is designed to be a complete audio substitute for print material and is specifically designed for use by people with “print disabilities”, and does not seem to have been utilized on the DIKSHA app in a uniform manner. Further, the audiobooks present on the app do not cover the same material as regular state/central board textbooks, and the content is missing for most grades and subjects. Even the little content that does exist requires separate, specific searches, which a visually-challenged learner may struggle to navigate without assistance. As seen below, even the website itself has no provisions for text to audio or any other accommodations for students with visual disabilities. 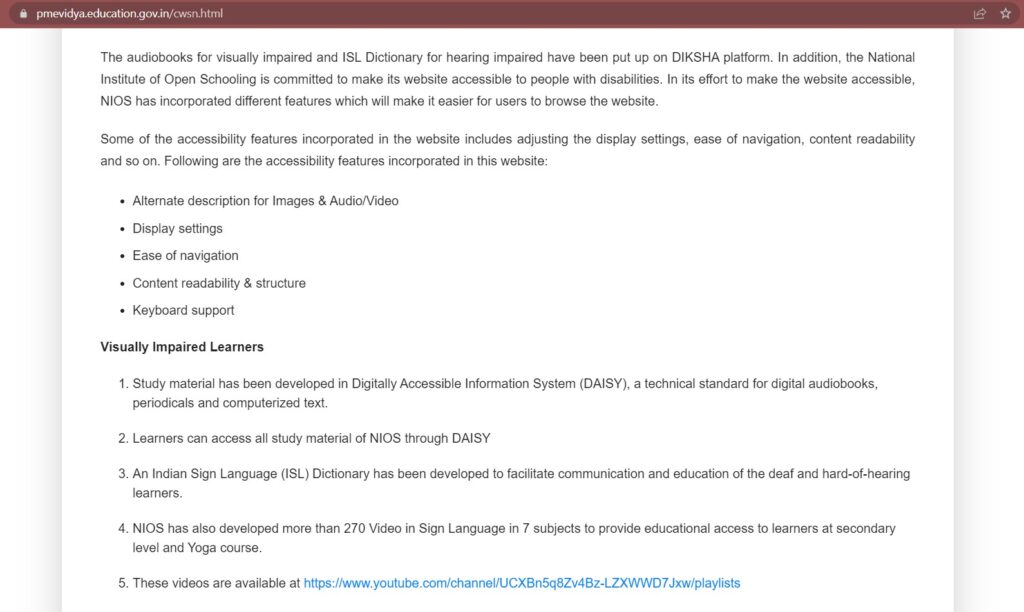 On the same lines, the ‘special content’ for hearing-impaired learners is limited to a single sub-section of the NIOS Youtube channel (pictured below). The channel exclusive deals with secondary education and has no primary education content. On the other hand, however, the channels do have a series of instructional yoga videos that are taught via sign language. 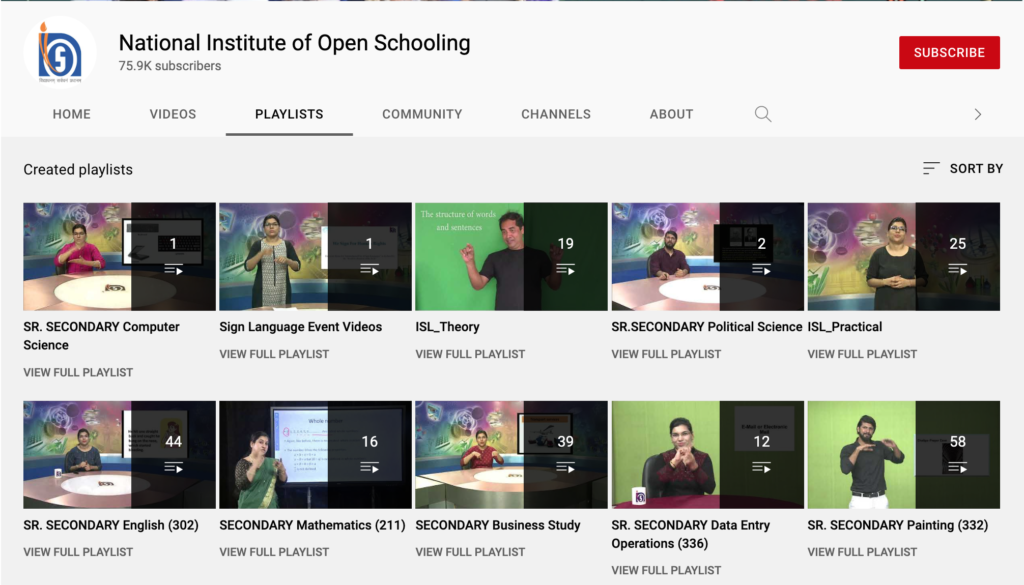 How Accessible is the PM e-Vidya Scheme?

The most significant issue with the PM e-Vidya Scheme can be traced back to accessibility and begins with how the Scheme has been planned and presented. The website is notoriously difficult to navigate, and a visitor is often unsure of where they might land up when clicking on a link. The fact that the Swayam Portal’s own website (a link that needs to be hunted down within the Swayam Portal sub-section on the PM e-Vidya website) opens with a warning against phishing emails and scams is not reassuring, as seen below. 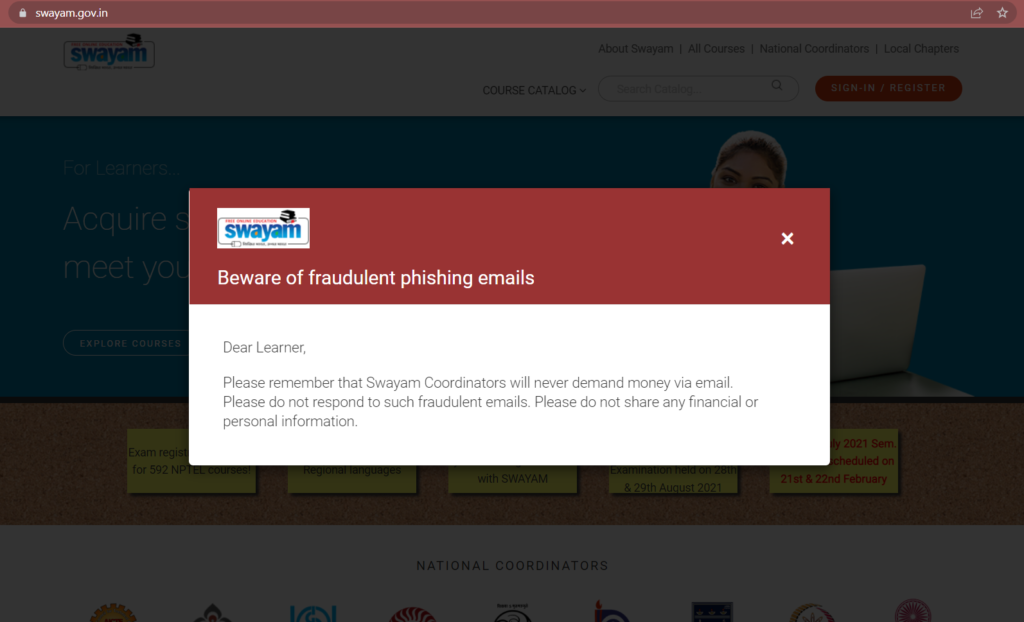 The description of each scheme is staggered and often finds itself repeated across the e-Vidya website, and sometimes even on the same page. Links and other clickable resources are hard to identify. The text is also plagued with jargon, making it difficult to navigate if the visitor is unfamiliar with the education sector, which might be the case for parents trying to find resources.

Language is yet another barrier, as the e-Vidya website is exclusively available in English. Within each initiative, the accommodation for different regional languages is varied and inconsistent. For instance, the DIKSHA website and app, have 12 different language filters available, but most show next to no actual material in languages besides English.

Even the SWAYAM Prabha TV Channel’s initiative falls quite short on accessibility, given its goal of expanding to 200 channels to accommodate more regional languages. However, according to the website, there are currently only 34 functional channels under the programme. Moreover, English and Hindi are the only language filters available on the archives of the website.

As the country moves toward a post-pandemic era and looks onward to reopening schools in full capacity across the nation, the government must pause to assess the manner in which PM e-Vidya will continue. There is a dire need for a digital education policy so as to ensure that we continue building on the progress and infrastructure made over the last two years.

Also Read: How Can Our Government-Run MOOCs Be Better?

In that spirit, the efficacy and intent of each digital education initiative need to be assessed.  Only those that truly benefit our students warrant the allocation of additional resources. The DIKSHA portal can serve as the primary directory for state and central syllabi, in all available languages. Furthermore, the SWAYAM Prabha TV Channels initiative and IITPal/eAbhyaas apps are the strongest aspects of the policy and can be sustained and promoted in a focused manner to ensure the widest reach possible.

It is undeniable that the future of India’s education sector lies at the intersection of traditional education and modern technology. While there was an 11.86% increase in the budgetary allocation to the education sector from last year to this year, it still falls short of the 6% total allocation recommended by the National Education Policy. In order to make quality learning accessible, budgetary allocations need to be proportionate and well-utilized.