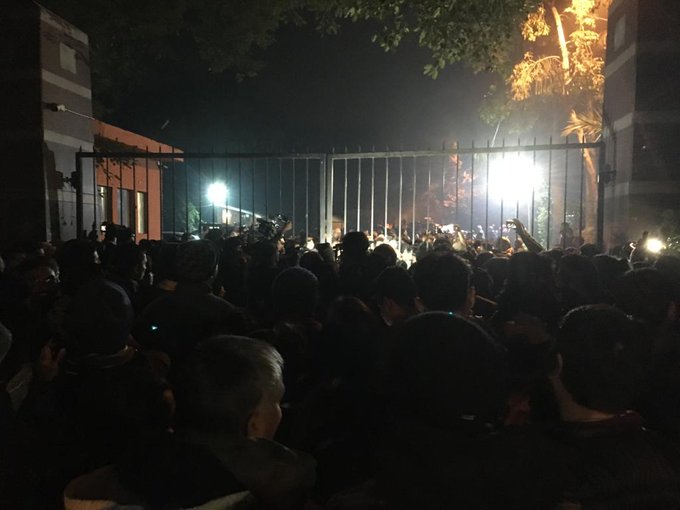 The day is like what’ve come to expect of any other in Delhi: filled with unease and tension over where the next lathi will land. At precisely 4:33 pm, my phone starts buzzing. News starts trickling in from JNU that people are roaming around with lathis and iron rods just outside the campus gates. At this point, I remained still. Nobody had any photos or videos yet to back up the claims.

Jump to 6:30-7:00 pm. The reports were now confirmed, except, horrifyingly so. Masked people were weaving through JNU’s campus, attacking students and professors, and damaging public property. Over the next few hours, they entered student hostels, dragged residents out, and beat them. As this piece was being written at 11:25pm, similar reports continued to stream out. Chants of “desh ke gaddaron ko, goli maaro saalo ko” rung aloud, both inside the campus and on the streets just outside it. At Munirka, an area right next to JNU, masked assailants were spotted outside as late as 10:00 pm.

Even with everything that happened yesterday, the biggest question on this correspondent’s mind is rather simple: Where was the police? There is video footage floating around the Twittersphere that shows masked men freely walking past police barricades. Is it not the job of the police to at least stop such a large, clearly suspicious group of people and enquire as to what their intentions are? Even while the violence was taking place in the hostels why didn’t the police enter? Why did it take them almost four hours to take patrol the campus? And worst of all, how is it possible that not one, not one, of the masked group was caught? Unfortunately for the Delhi police, especially those leading it, all this reeks of simply turning a blind eye. Why might this be so?

Our team of doctors, nurses & medical volunteers who reached JNU to give first aid to injured students & teachers, was attacked by hundreds of goons. Mob manhandled doctors, nurses & threatened them. Our ambulance’s glass & windows broken, this is totally inhuman & insane. pic.twitter.com/IOiu7BHVbG

While JNU was attacked, and the media hysteria slowly rose, the police quietly received permission to disperse the peaceful protesters gathered at Shaheen Bagh. Would it be inaccurate to say that this inaction was part of a coordinated attempt to quash the will of the anti-CAA protests? Probably not. After all, targeting JNU over the years has remained a favourite strategy of the current government over the years. Now that demonising the varsity has been naturalised, the external violence wreaked on its grounds serves as the perfect distraction from the CAA-NRC protests being waged across the country.

It doesn’t take an overly smart individual to recognize that JNU has been on the BJP and RSS’ scanner for a long time, pretty much ever since the former officially came to power in 2014. Since then, the campus has been at the centre of national discourse — it is from JNU and its students that the much-used ‘anti-national’ tag originated, in spite of the university’s many contributions to nation-building through its students and research. After all, both Nirmala Sitharaman and S. Jaishankar, formidable figures in Modi’s patriotic nation-state, are alumni of the university.

So, thanks to the current government, the campus has been through an extremely tumultuous half-decade. From cutting down on funding, to reducing the functioning time of the dhabhas, to preferring laundry services over the traditional dhobi system, there have been small, but continuous dents on the character of the university. Possibly the biggest sign of discontent between the students and the ruling party is the Vice-Chancellor (VC) M. Jagadesh Kumar. Appointed in 2016, the VC has been at loggerheads with every successive student government, as well as the JNU Teacher’s Association. The teachers’ community called for his immediate removal, holding him responsible for the violence, calling it an “attempt to terrorise the students”.

– Resignation letter reads, “Since we failed to provide security to students, taking moral responsibility I am resigning”

Hence, for a significant number of students and faculty, the fight is against the BJP, its politics, and ‘not-so-subtle’ policies that try to change the character of the varsity.

Post-Villainisation of JNU: Where to, From here?

The most heartbreaking thing about this entire episode is the reaction of those at the highest echelons of political power, whether in the Opposition or in the sitting government. Twitter has been afloat with the hashtag #LeftAttacksJNU, as ABVP and BJP affiliates use the incident to blame the violence on rival parties.

The opposition parties, meanwhile, are all comfortably tweeting about the atrocities, but not really showing up on the ground. A case in point is Arvind Kejriwal, who up until a couple of years ago was on the streets fasting and striking for not having enough powers as the leader of the NCR. While he has time and again put out a series of statements and tweets against the implementation of the CAA, Kejriwal is yet to be seen on the ground at any of the protests. Even now, it seems that the Aam Aadmi Party (AAP) believes that taking too strong a stance in these protests will harm them in the upcoming elections.

Sheila Dikshit’s response after each rape – “what can I do? Delhi police not in my control.” Do we want such a helpless CM?

Perhaps the AAP is just being careful till their hopeful re-election, after which they can come out all guns blazing. Yet, right now, such a hypothesis barely stands any moral ground. How can such violence being waged in a city in which you are in power not warrant a strong ground-level opposition? What else needs to happen before Kejriwal & Co. actively lend their voices and weight to the students residing in their state?

You May Also Like: The CAA+NRC Protests: Who is the New Opposition in India?

On the other hand, we’re left with the Gandhis. While Priyanka Gandhi Vadra has been active, the same cannot be said of her brother and ex-president of the Indian National Congress, Rahul Gandhi. Sadly, the man seems to be but a shadow of his Presidential self. At every step, he seems to be either a little too late, or a little too off-topic. Gandhi has arguably nothing to lose by staying put in Delhi, and actively engaging on the ground with the students. The movement against the CAA and NRC is an umbrella movement for rising frustration against the gundaraj in power. At this moment of ideological rupture, it is sad to watch the Grand Old Party barely living up to the ideals that held it in good stead in similar protests some 100 years ago. When the Opposition forfeits their voice, what happens to my Idea of India?

This incident is more than just a battle against an institution or its ‘anti-national’ students. It is an attack on what the space represents: on the idea that India is made up of multiple identities, cultures, and forms of opinionated expression. Frankly, it doesn’t matter whether or not the BJP and ABVP officially sanctioned yesterday’s violence. The fact remains that over the last five years, they have created an atmosphere where such violent sentiments against educational institutions are legitimate. Those who subscribe to their ideology, even the most extreme parts of it, are thus given a free hand to do what they want.

A sense of impunity mixed with the “jaanta hai mera baap kaun hai?” attitude has taken over our political landscape, as evidenced by last night’s events. This is the worst state of governance in the country, arguably since the Godhra riots. To have an armed mob run wild in the national capital, in one of the country’s most revered universities, and have those in power play a wild blame game while the police look on, is simply heart-breaking.

These events put in peril the idea of India this correspondent grew up with, one where diversity in thought, culture, and people is what gave the nation its strength. That India thrives in a celebration of its difference. That India is a single entity made of complex dissimilarities, each as woven into each other as the next. The events of last night have to make everybody, especially our political leaders across the spectrum, take a step back and ask themselves, where do we go from here?