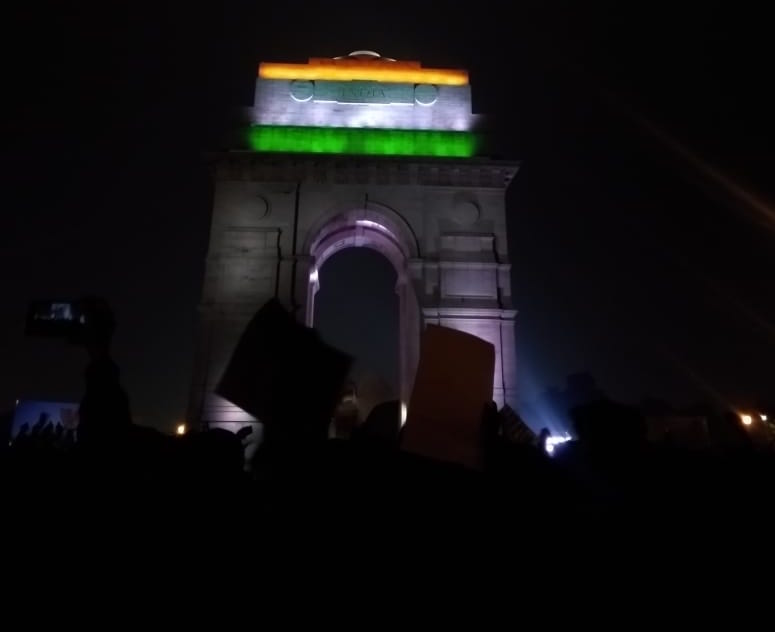 Protests are erupting all over the country, some peaceful, some violent. Some feature students, others citizens, and some, according to the BJP, the fearsome ‘urban Naxal’ (of whom Ramachandra Guha is apparently the most tyrannical.) The protests are happening for different reasons. In the Northeast, especially in the states of Assam and Tripura, indigenous cultures already threatened by an influx of Bengali migrants, stand to be further marginalised should the CAA and NRC/NPR push through.

In New Delhi, crowds have mobilised over the Delhi police’s excessive use of force against the students of Jamia Milia Islamia. As time has passed, they have galvanised over the clearly exclusionary facets of the CAA+NRC combination. Across the rest of the country, from Tamil Nadu to West Bengal to Maharashtra to Kerala, protestors have mobilised along similar lines.

Now, the reasons for protesting are clearly diverse. For many critics, this plurality of protest is what should be focused on: what do these protests really stand for? Is there any point to them? These are moot questions.

In the case of the protests, where you come from and your social identity defines your cause, be it protesting against the CAA+NRC, or for it. The inability of television anchors and pundits to identify the reasons behind mobilisation in ‘liberal-happy’ metros or the under-documented regions outside of them, should not imply that the movement is headless or aimless. In their defence though, this lack of awareness could have to do with the State’s uniform response to the protests: silencing them, through imposing section 144, or excessive use of state force. Here’s a rundown, in case your local news channel hasn’t managed to cover the details of these atrocities.

In Assam and Tripura, some of the first sites of resistance against the CAA+NRC, internet services were suspended. The leader of the resistance, Akhil Gogoi, was arrested by the police and by his own admission, subject to police brutality. In New Delhi, multiple protestors were detained as Section 144 was imposed in the heart of the city’s bureaucratic vistas, and telephone services were temporarily suspended. In the under-documented protests that took place in the less-privileged Muslim locales of Daryaganj, police lathi-charged and detained demonstrators (including minors) after only a few protestors turned violent, eventually denying them medical aid and legal representation once detained.

The Chief Metropolitan Magistrate (Central Delhi) directs SHO PS Daryaganj to allow advocates to meet detainees and to provide necessary medical succour to them. CMM also notes that the detention of minors in a PS is flagrant violation of law. pic.twitter.com/nrqXCTngX3

In BJP-ruled Uttar Pradesh, in an unprecedented move, Section 144 was imposed across the state. Protests in Lucknow turned violent, with over 879 protestors arrested so far across UP, and another 5000 preventatively detained to ‘keep the peace’ presumably. In Kanpur alone yesterday, a remarkable 21,000 people were booked for instigating violence. 17 people have died in the process, including an 8-year-old child. Reports are flooding in that in Yogi’s UP, the BJP has stoked the violence, further targeting Muslim homes and businesses. Kashmir of course, cut off from the country for five months, may have witnessed all of this and more, but we’ll never really know, will we? The continued use of force against citizens, which only instigates further violence, has hit local police forces too, with multiple officers injured in the process.

Gunshots were fired after the local MP and Union Minister Sanjeev Baliyan emerged on the scene with his supporters at the Mahavir Chowk, “He pushed the police to take action against the peaceful protesters,” https://t.co/jMC357f2sI

This is the current condition of the Indian nation-state. While protestors are thronging around the country to defend their understanding of the Indian nation, one defined by the ideals of secularism, peaceful dissent, and federalism laid out in the Constitution, the State, now seemingly divorced from these ideals has cracked down on them. Never before have the ideals of the nation and the State been at such odds with each other. Even if you are cautiously awaiting the arrival of an official document on the NRC (which has to be viewed in tandem with the CAA in any case), you cannot deny that in these events, along with secularism, democratic rights are being systematically ousted from India’s formal political systems.

How do we know this for sure, though? By answering a question that’s on most people’s lips: where is the ‘Opposition’ in the midst of protests for independent India’s soul? A solidified Opposition to the Centre and its policies could help legitimise protests, and minimise the extent of the State brutality taking place.

In the case of Assam, the Krishak Mukti Sangram Samiti and All Assam Students Union are unabashedly opposing the Centre, strong in their beliefs for indigenous rights and culture, and taking literal beatings as a result. Mamata Banerjee, even if for more calculated electoral reasons, has stood her ground in West Bengal. Other regional giants like the RJD, YSRCP, JD(U), and BSP have voiced their protest in their own backyards, by refusing to implement the laws.

Yet, across the rest of the varied CAA+NRC protests, larger parties have taken a backseat. Out of the national parties of real electoral significance, the INC’s inability to leave the comfortable venues of India Gate and uphold its founding values is significant. Priyanka Gandhi spoke about how the CAA+NRC is ‘anti-poor’, and how important students are. Sonia Gandhi delivered a stern video address on the protests and how dissent is crucial in democracy from a well-decorated office. Rahul Gandhi has thus far been enjoying the wintry climes of Seoul, and is yet to deliver his first real address on violence (he has tweeted in the meantime, though.) Beyond superficial appeals to students and democracy, no party is willing to address the factors fuelling the protests.

The reasons are clear: no political party wants to be openly associated with ‘appeasing Muslims’ in their backyard anymore, and even fewer condescend to support the Northeast when it asks for it. Perhaps this is the greatest victory of the Shah-Modi duo, their ability to mainstream ‘soft’ Hindutva to the extent that democratic values take a backseat to the sentiments of a burgeoning Hindu rashtra. In this atmosphere, it is unlikely that any strong, unified stance from the electoral Opposition will truly emerge. Too much stands to be lost in the next election five years down the line.

The Opposition, that could have been led by India’s grand old parties (of admittedly dwindling relevance), has perhaps forsaken the secular future of this country more than the Hindu Right has.

If this is the case, then it is important to reimagine how we understand the Opposition, and who gets to occupy it. Does it deserve to be occupied by tweeting political stalwarts alone? Or is it now occupied by Chandrashekhar Azad of the Bhim Army? By Akhil Gogoi and those standing by him as he remains booked under the draconian Unlawful Activities (Prevention) Act? By the students of Jamia Milia Islamia and Aligarh Muslim University, who dared to say that the treatment met out to them was unforgivable? By Jim Sarbh, one of the lone Bollywood celebrities capable of articulating an intelligible public response on the NRC-CAA protests? By the women in Bangalore who surrounded men peacefully protesting to prevent their assured detention under Section 144? By the innumerable social influencers online who, in spite of state monitoring of social media, have done their best to ensure the digital visibility of these protests persists?

That the government takes this Opposition seriously is clear. In a surprising show of furtiveness, the BJP has deleted its official tweet on Amit Shah’s intentions of combining the NRC and CAA. Then take the Prime Minister’s apparent diffidence towards the NRC at a recent rally in New Delhi: the BJP really doesn’t care about the NRC, it was just following the Supreme Court’s orders in Assam!

The protests have thrown more of an electoral challenge to Shah’s BJP, which rode on the coattails of a nationwide NRC over the past year, than the INC has been able to over the past five years. Why so? As the contours of Hindu nationalism slowly sharpen, so do the identities of those who are to be excluded from it. Secular democracy is being defended by those who stand to seriously lose in the absence of it. These are the young, the ethnic and religious minorities, the castes and classes that will be persecuted first, and those who uphold the limits of the law and power as envisioned by our founding politicians. India’s democratic institutions may be visibly fractured as a result of the protests, but, doomsday predictions of an unchallengeable Centre are promisingly being challenged by a newly formed Citizen’s Opposition.

The underlying motive of these diverse protests then, should be clear in this light: to reinstate democracy as the great leveler, not religion. Only when that happens can we have much-needed conversations on equality and refuge that comply with our own laws.