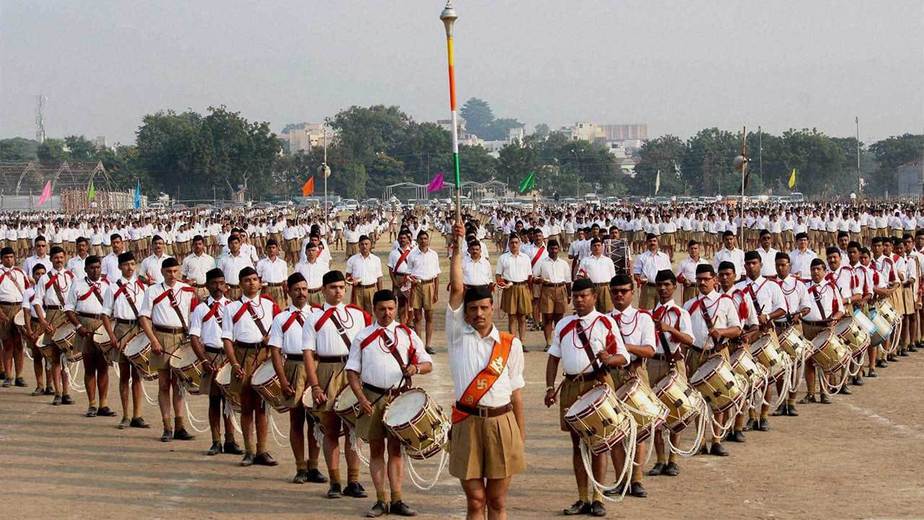 When translated from Sanskrit, the term shakha (śākhā) means a party, section, faction, school or sect of an ideological group. In ancient times, it was a Hindu theological school which specialised in teaching Vedic scriptures or other traditional texts. A.L.Basham’s The Wonder That Was India claims that affiliation with specific shakhas or schools in a traditional Hindu society was an important aspect of class identity.

“A Hindu means a person who regards this land of Bharatvarsha, from the Indus to the Seas as his Fatherland, as well as his holy land that is the cradle land of his religion.”

This brand of national identity originated in Vinayak Damodar Savarkar’s Hindutva. It refers to a Hindu Rashtra and Akhand Bharat, or an Undivided Bharat. India’s communal clashes in 1923 created a culture of protective organisations in the uncertain atmosphere of the crumbling British Raj. Consequently, the Rashtriya Swayamsevak Sangh (RSS) took root as a cultural organisation with Dr K.B. Hedgewar at its helm.

In 1951, the Bharatiya Jan Sangh convened for the first time as a political wing of the RSS. In 1980, the Jan Sangh adopted a name which is at the tongue of every Indian household today: the Bharatiya Janata Party. While the BJP includes several RSS veterans, the RSS tries to maintain its distance from the political party and participation in affairs of the state. This distancing is especially visible in the BJP’s recent “Congress-mukt Bharat” movement. Chief of the RSS, Mohan Bhagwat maintains that the phrase “is not in the parlance of the RSS. The word mukt is used in politics and not part of the Sangh’s lexicon”, thereby trying to preserve the RSS’s non-political, non-exclusionary nature.

Today’s Sangh shakha is the daily meeting of the RSS. Shakhas are also held by the Hindu Swayamsevak Sangh, which is the overseas subsidiary branch of the organisation. In Bunch of Thoughts, M.S. Golwalkar likened the “Sangh technique of education” to the “Platonic System of Music and Gymnastics”, referring to a holistic embodiment of the arts, sciences, physical strength and fitness along with “courage needed for resisting wrong and aggression”.

By 1928, the RSS had established 18 shakhas across the Nagpur and Wardha regions of Maharashtra. From then on, support and membership rose exponentially, despite the two short-lived bans on the organisation in 1948 and during the Emergency of 1975.

Exact numbers of actively associated members of the RSS are unknown, for no official records are maintained. The RSS, however, determines its strength on the basis of attendance of the daily Sangh shakhas which varies every day from place to place. Although an average of 26,000 people register for the RSS every month, not as many are actively involved in activities of the Sangh. Yet, the organisation’s general secretary Suresh Joshi reported an increase in operational shakhas across the country from 57,165 in 2017 to 58, 967 in 2018.

Ojas Sahasrabuddhe, an undergraduate at Ashoka University in Sonipat, joined the RSS in 2015. He believes that the organisation has a tremendous capacity to bring about change. Originally from Pune, Ojas attends a local shakha when he visits home. The daily shakha lasts between 1-2 hours and welcomes attendees of all ages. Each meeting mandatorily contains four parts: 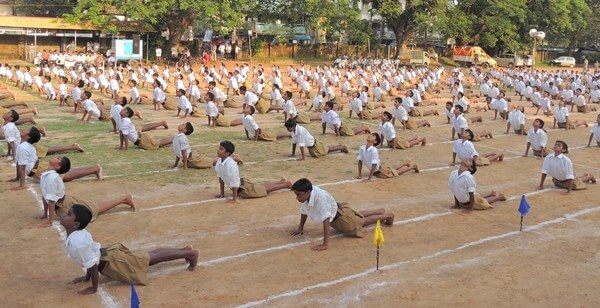 Physical Training at a Sang shakha

For Ajit*, an RSS member in Mumbai, the shakha is a place of learning. Led by the shikshak (leader), the content of bhaudik sessions depends on the attendance for that day. If many school-going children attend, their bhaudik is separated from the group and encompasses lessons in mathematics, Sanskrit etc. Adults and children alike are taught “discipline, respect for elders, and socialising with people”. “The education at the shakha is not bookish”, says Ajit. The shakha teaches attendees selflessness, the importance of the nation and nationalism. Respect for one’s family and the motherland is of prime importance.

Contrary to popular opinion, Ajit says, “nobody in [the] RSS will ever speak about caste and religion” because the “nation comes first” for the organisation. Ajit even told me that he previously participated in shakhas alongside Muslim attendees. It is perhaps in tune with this sense of primacy attached to the nation that the Sangh seems to distance itself from BJP politics.

The official website of the RSS confirms Ajit’s perspective:

After nearly seven decades since the inception of the Sangh, people continue to express puzzlement as to how such a simple tool as the daily Shakha can produce idealists and patriots of such sterling worth, willing to dedicate all their energies and talents to the cause of the Motherland, willing even to shed their lives if need be to protect the honour of the Motherland.

During Ojas’ participation in rural hygiene drives organised by the Sangh, he was delighted to make “real friends” with the village folk with whom he conversed “as equals”. This, he believes, would have been difficult without the RSS’s involvement, what with “caste compositions” creating cleavages in schools across the country.

According to a 2016 publication by the RSS’s mouthpiece Organiser, Dr B.R. Ambedkar is supposed to have said: “I am happy to find absolute equality between Savarniyas (Upper Caste) and Harijans (Lower Caste) without anyone being aware of such difference existing.” However, Dalit activists and other academics were unable to find proof for such a claim and considered it as appropriating an icon.

Amidst the Dalit agitations in Delhi surrounding the SC’s amendments to the SC/ST (Prevention of Atrocities) Act, Rahul Gandhi admonished the RSS and BJP for keeping “Dalits at the lowest level of Indian society” on Twitter.

Gandhi’s comments are a testament to the suspicions regarding the RSS’s ethos. For a shakha to fit into secular India, it must adopt a sensitive, secular grammar. Alongside state and central boards which attempt to keep India’s diverse harmony in educational institutions, the Sangh shakha seems to adopt a mixture of Nehruvian and French secularism. Their Muslim, Christian and Dalit counterparts are said to be positioned as equals within shakha settings.

For the pracharaks, it is a space for nationalism, respect and selflessness — leaving no room for communal divisions. Consequently, one is forced to wonder about the class identities that the modern shakha cultivates and wherefore it earned its reputation for being a fundamentalist religious organisation.