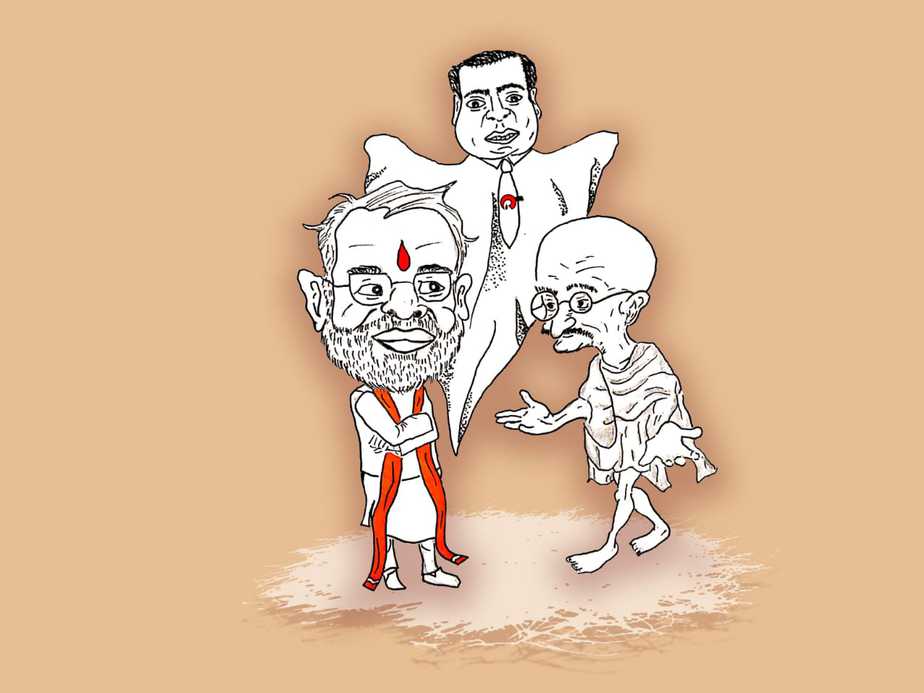 Mohandas Gandhi (MG): “Modiji, did I hear correctly? On 24th April you said that the biggest lesson of the COVID-19crisis is to move towards self-reliance and self-sufficiency … and repeated this in another address on 12th May?”

Narendra Modi (NM): “Yes, indeed, Gandhiji. On the 24th, I was speaking to sarpanches on National Panchayat Day, and on the 12th, to the nation! I said that every village, every district, and the country itself, needs to be self-reliant.”

MG: “Amazing! This is what I dreamt of when we fought for independence from the British. I’d even said, in Hind Swaraj, that freedom from the British will not mean much without real swaraj, with communities being able to govern themselves and meet their own needs.”

NM: “I have always believed in your message of Hind Swaraj, Gandhiji.”

MG: “Nice to hear! But tell me, why did it take a virus to make you realise this belief? On every Gandhi Jayanti, you and all your predecessors have committed to the ideals I lived and died for. And yet for all these decades, you’ve not remembered that self-reliant communities are at the base of these same ideals! Why the fuss suddenly now?”

NM: “No, no, Gandhiji, my government has always advocated for swaraj, and worked for it. It is your followers in the Congress who strayed away from this path. So now, we are trying to bring Hindustan back on the right track.”

MG: “You know, I had serious doubts about the model of development and governance we were to adopt after Independence. I even expressed this clearly in a letter to Jawaharlal, before Independence, in October 1945.  Development was always a colonial idea, hatched by the victors of World War II. Modern development meant a heavy focus on big industries and infrastructure, and the centralisation of powers in Delhi, rather than a full decentralisation of economic activity (what my colleague Kumarappa referred to as an ‘Economy of Permanence’) and true grassroots democracy. That’s what I’d meant by swaraj. But we went the Western way, chasing material and financial dreams. I was even more saddened when we adopted globalisation and liberalisation in 1991, taking us further away from any kind of swaraj. But..”

NM (interrupting): “Sorry to interrupt, Gandhiji, but this is precisely what I meant when I said the Congress derailed us for all those decades.”

MG: “Yes, indeed, but how is your approach any different? At least in the first few decades after 1947, there was some attempt at social control over the economy, and the 73rd and 74th Constitutional amendments to bring about some level of gram and nagar swaraj. Of course, after 1991 this was all thrown to the winds. But there were still some positive measures like the laws on the Right to Information, Rural Employment Guarantee, and Forest Rights in the early 2000s. Yet, since 2014, I’ve not seen anything that strengthens swaraj. In fact, I was quite bemused to see you racing around the world, seeking industrial investments from foreign companies and governments, in something called … let me see … ‘Make in India’? And now I hear, using the COVID crisis, you are trying to lure hundreds of foreign companies currently operating in China to come to India … including for textiles and food processing. This is a somewhat strange definition of ‘self-reliance’, no? How does this square with what you said on the 24th March about ‘never having to look outside’? For me, gram swaraj was first and foremost about food and clothes being produced by communities!”

NM: “Er, um … you see, Gandhiji, there is no contradiction. Hindustan has such an ancient history of making everyone who comes to India a Hindustani… So we are certain that any company that invests here would also become Indian, and so we would march strongly towards self-reliance!”

MG: “Really? By this logic, when Manmohan Singh brought in economic liberalisation in 1991, was he too moving towards swaraj then?

NM: “No, no, his notion was different. He was interested only in high growth rates, however they are obtained! We have actually lowered growth rates, but have made the fundamentals of the economy stronger. I’ll get my Finance Minister to send you the details.”

MG: “Seems like economic doublespeak to me, for your party too has promised high growth rates! But back to self-reliance and swaraj, what really is your conception of these concepts? Your 2019 election manifesto only listed some charity items like piped drinking water, housing, and roads, under ‘swaraj’. I did not see anything on empowering villages to decide their own destiny?”

NM: “But we have to provide them with basic needs, no? And we’ve given them all the internet, and the Jan Dhan Yojana that gives them so much financial access! Isn’t that enough for a village to realise its destiny?”

MG: “Yes, but I had defined self-reliance as ‘every village has to be self-sustained and capable of managing its affairs’. Neither the Congress nor the BJP, nor any of the other parties in power in Delhi, have actually devolved such powers to panchayats and urban wards as per the 73rd and 74th Constitutional Amendments. In fact, you have all denied them financial and legal powers! And you have all maintained the power to take away the lands, forests, and water their livelihoods are based on, for the nations’ supposed ‘development’. In fact, during your two terms as Prime Minister, I’m told, this kind of land grab has only increased… your Environment Ministry is very busy clearing nearly every mining, dam, industrial project coming its way! And since 1991 in particular, all you governments have promoted high levels of consumerism in the name of growth, which is hardly compatible with the simplicity that self-reliance requires. In such a situation, how can community swaraj  be achieved?”

NM: “Gandhiji, with all due respect, surely you know that villagers are like children, they have to be helped by the government. And to achieve development, we do have to take away their land to give to industries … How else will we help people get employment and move out of poverty?”

MG: “Surely the simpler method is to focus on local, labour-intensive, decentralised production …  Not bringing in the world’s biggest corporations who do everything through machines! But you actually even imposed GST on handlooms, I’m told … and some states ruled by your party have suspended labour laws?”

NM: “Oh, that is only to make those craftspersons and labourers work harder! And anyway, I’ll let you into a little secret: all the foreign companies we are inviting … will also be made to change their names to Hindustani ones. That’s why I really like Vedanta … even though it’s a British company, it has such a great Indian name!”

MG: “Oh, is that the one that was going to mine the Dongria Kondh Adivasis of Odisha out of their own hills? A community that is already self-reliant, I hear! So is your vision to open up even more rural areas for such ‘development’ and convert villagers into easy labour?”

NM (interrupting again): “YES! You always said we should have a labour-intensive economy … The problem is that communities like the Dongria Kondh live off nature and do not contribute to the economy, we need to convert them into productive labour.”

MG: “And is that why your government has made it so hard for migrant labour to go back home during the pandemic, so they can remain at the mercy of industrialists and the construction lobby? That’s hardly what I meant by the dignity of labour!”

NM: “You are being fed lies by these urban Naxals! See, this is why we have to punish them, they don’t speak the truth, they stray from your holy path, Gandhiji. We are the true satyagrahis…”

MG (groaning): “NO NO! Had I not the experience of dealing with all the double-speaking British in my time, I would have been speechless with horror at your interpretation of satyagraha! The British called me a terrorist, for speaking truth to power … and now you are doing the same with anyone dissenting from you! You are charging them under the same colonial laws of ‘sedition’ that punished me! People have the right to protest when the state takes anti-people steps … They have to engage in civil disobedience. Do you know how else I defined swaraj? It’s in Young India: ‘Swaraj will come not by the acquisition of authority by a few, but by the acquisition of the capacity by all to resist authority when it is abused’.”

(silence from the other side)

NM: Sorry, Gandhiji, a lot of static on the phone, I could not hear you …”

MG: Never mind… To paraphrase something I said long back, you can make someone who can’t hear listen, but not someone who pretends he can’t hear … But on another point, does not all this industrialisation undermine the ecological basis of our civilisation? I’m told you are a staunch Hindu… But surely you know that our scriptures are explicit about respecting Nature and other species?”

NM: “Of course, Gandhiji, this is very much in our notion of Vasudhaiv Kutumbakam [the world is one family] … in fact we are enhancing nature, for every hectare of the forest we divert, we plant twice the amount of trees!”

MG: “But a forest that has grown over thousands of years can’t be replaced once destroyed, can it?”

NM: “I’m not sure who has been advising you, Gandhiji, but in fact, a plantation with 2-3 species of trees is so much better than a messy forest with hundreds; just like humans, they should also be the same. I’m even told such plantations are better carbon absorbers than forests are … I’m not sure you are up to date on climate change issues, they have emerged well after your time.”

MG: “Oh, I’m well aware of them, as well as of how won the Champion of the Earth award for your efforts to control it, which especially bemused me, given how environmental laws weakened under your government. And returning to gram swaraj, how is this possible if you take away communities’ right to say ‘no’ to projects that take away their land and natural resources? Or even their right to be consulted, or be part of public hearings, which you’ve removed for many kinds of projects? I heard you are even clearing projects in the middle of the COVID-19 crisis, when people can’t gather to protest.”

NM: “Look, Gandhiji, I’ve already said my people are like children, they don’t know their own minds sometimes… so they need strong parents like me!”

MG: “Oh now I realise, by self-reliant you actually mean people being reliant on yourself!”

3rd voice: “Narendra, don’t forget I’m in the equation too!”

MG: “Who is that, Modiji? I did not know someone else was listening in!?”