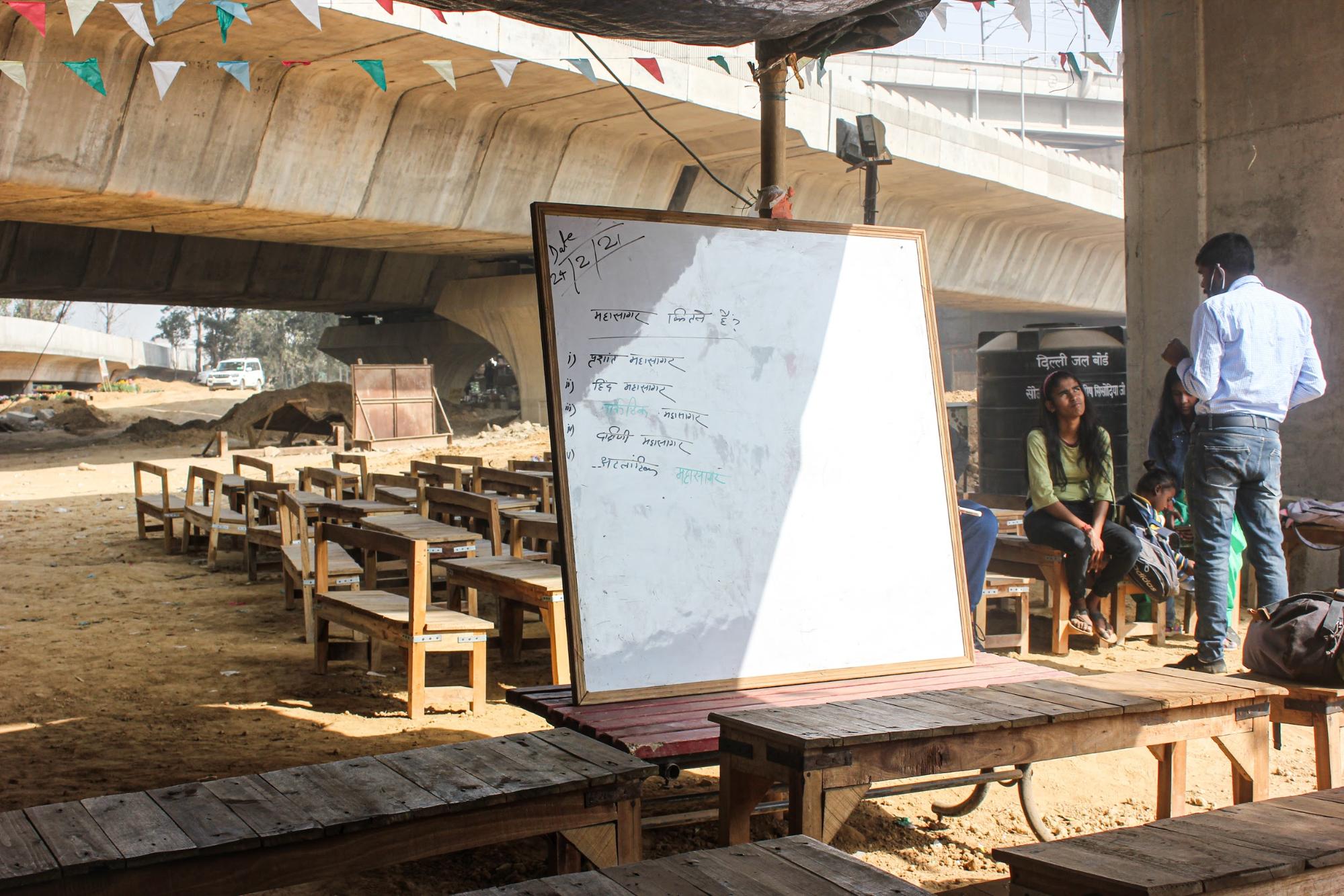 Mayur Vihar metro station in northeast Delhi is a busy place. Rickshaws line up outside, waiting to ferry passengers to their destinations. A bulldozer noisily makes its way across the road towards two flyover loops that are under construction just metres away from the metro station.

When walking under this network of soon-to-be highways and flyovers, the sounds of hustle change. Delicate rings from cycle bells fill the background, as men ride carts carrying potted plants and fresh vegetables grown on Yamuna Khadar—an area of the Yamuna’s floodplain dotted with farms, nurseries, and jhuggis. In the midst of this bustle emerges the soft murmur of children reciting the Hindi alphabet and naming the oceans of the world.

Under a shroud of temporary structures covered with tarpaulin, students from pre-primary to high school are engaged in their respective schoolwork for the day. These structures are an offshoot of the Van Phool School; the name translates to a “wild flower”, or those flowers that can grow even in hostile environments.

“Across the road, people are talking about how many Mbps their Internet speed is, but on this side of the road, people do not even know what that means,” says Naresh Pal, the manager of this informal school. Naresh is standing close to the road that separates Yamuna Khadar’s rural-ness from Mayur Vihar’s high-rise apartments. “While the world was shifting to online education, it became very clear that the digital divide here is huge. Students will miss out on their education as long as schools remain closed due to the ongoing COVID-19 pandemic,” he continues.

Naresh’s anxieties seem valid. Over the past year, more than 1,66,000 students from Delhi’s government and municipal schools have “fallen off the map” and schools have been unable to trace them. The sudden shift to online education and the migration of families to their hometowns are the reasons cited for their withdrawal from the education system. Amidst this uncertain learning environment, for about 200 students without access to the Internet and smartphones, this informal school is steadily continuing their learning journey.

The Van Phool schools have existed in various forms around Yamuna Khadar since 1993—retired General Secretary Gurmeet Singh Lubana began this initiative for migrant families who had moved to Delhi from Uttar Pradesh. However, this particular branch under the upcoming flyovers began operations in October of last year.

“Studying here is fun. Bhaiya [referring to his teacher] sometimes makes us play games before we begin class in the morning,” says Dipu, a Grade 3 student. He is officially enrolled in a government school a few kilometres away, but like 75% of the other students here, has been attending Van Phool since October of 2020. When the government schools were open, Van Phool classes would take place in the evenings, to provide additional support for the students. “I miss school, I hope it begins soon,” Dipu says, as he shows me his notebook with his classwork from the day—a set of word meanings to translate from English to Hindi. His friend’s sister, Babli, a Grade 7 student wants to get home soon. She has to work on her homework on nouns. “Didi [referring to her teacher] will quiz us tomorrow in class,” Babli says.

Dipu and his other classmates are divided into different groups, not on the basis of the classes they are enrolled in, but according to their learning levels. “We found that even when students were in Grade 5, they could not read words. So we grouped them into different levels based on their abilities, starting from ‘0 level’ for pre-primary students. The next level includes students roughly between Grades 1 to 5,” says Khushboo Kawat, a teacher here currently pursuing Political Science honours at Delhi University’s PGDAV college. Khushboo’s eight colleagues are also enrolled in various graduation courses ranging from Engineering to the Social Sciences. Each day after teaching between 7 am to 10 am, the teachers disperse to attend their own online classes. Many have themselves been students of the Van Phool schools.

“Most of these teachers have been my students,” Naresh says proudly. He began teaching in 2011 when he migrated from his village in Uttar Pradesh with just about ₹700 in his pocket. He is currently preparing for the UPSC exams. “For the past few years, we have managed to maintain a tradition. Students who have been studying at Van Phool have been topping classes in their government schools,” Naresh continues, smiling.

For parents, the school emerged when their children needed it the most. “My 9-year-old daughter could not benefit from online classes since we don’t have a smartphone. For students like her, the government school calls them to collect worksheets once a week, which they can complete at home. Van Phool helped her to complete the worksheets,” says Pooja, who works as a domestic help in the flats across the road. She and the other parents here pay ₹200 a month as fees to Van Phool.

Pooja’s neighbour, Divya,* sends her 5-year-old daughter to Van Phool for a different reason. “My daughter has not yet been enrolled in the government school. I feel Van Phool will be able to prepare her for school next year. Aur kuch nahi, toh uthna-baithna seekh jayegi [if nothing else, she will learn how to behave in an atmosphere of a classroom].”

School On the Move

Van Phool did not always operate under Mayur Vihar’s flyovers. What initially began as an initiative in 1993 to teach students under a neem tree in Yamuna Khadar, moved to a cattle shed in 2010. But in 2011, the Delhi Development Authority (DDA) demolished the shed—it was on land that the DDA leased out to farmers in 1949, after which the contract was terminated in 1966. Like most of the farming land in Yamuna Khadar, DDA claimed it was their land, with farmers using it for agriculture now considered ‘encroachers.’ Various such demolitions of jhuggis, farms, and nurseries have occurred since then, the latest taking place last September. Currently, farmers are fighting a case in the National Green Tribunal against the demolitions.

You May Also Like: Demolishing Nurseries to Plant Trees on the Banks of the Yamuna

As a result of this churn, Van Phool then moved to a structure that worked as a school by day, and a night shelter at night for the homeless. Provided by the Delhi Urban Shelter Improvement Board, this night shelter-cum-school operated about 2 kilometres from Van Phool’s current location. Then, sometime in 2015, Naresh and his colleagues had an idea—in Yamuna Khadar, where the threat of demolition is always looming, why not create a school that can be easily dismantled and moved elsewhere, one that can thus protect itself from being demolished? This gave birth to a unique structure—a school that could be erected in a few days, and dismantled in a few hours, whenever required.

A Special Design for Special Circumstances

“Teachers of the Van Phool school approached us. The brief that they gave us was simple—they needed a low-cost design and a temporary structure that could be taken down and put up again,” says Swati Janu, an architect and founder of the Social Design Collaborative, the organisation that designed ‘ModSkool’, a shorter name for a Modular School. “For us, it was important to understand and incorporate how people were already building structures here,” Swati continues. “In Yamuna Khadar, the building material that people used for their homes was mostly bamboo and dried grass, so we decided to use those for the school too.”

What they then came up with was a basic iron frame that provides constant structural support, while the infill could be made of locally available material whenever the school would move. “The windows were made of bamboo which would be rotated to ensure ventilation in the classroom,” adds Naresh who saw ModSkool being built in 2017 in Yamuna Khadar, where Van Phool’s classes used to be held.

But owing to another land dispute, ModSkool had to be dismantled and shifted to a village in Greater Noida where it currently functions. The local craft of charpai weaving, unique to Modskool’s current location in Noida, was then incorporated into the design there, while the iron structure has remained the same.

In the meanwhile, Van Phool continued its classes in a jumble of infrastructure acquired over the years. There is a shed made of bamboo and a thatched roof, all of which belonged to a priest. The wooden benches and a few whiteboards have been donated by a visitor who frequented the school as it fell en route his morning walk. A new shed was erected when two German journalists donated ₹5,000 to the school. “The new shed which is used as a class for the higher classes was designed by the students themselves. Together, they put it up, and now they proudly call this school theirs,” Naresh says.

But, there is a lot of scope for improvement. “Since most of the roofs of these sheds are tarpaulin, students are going to bake in the summer!” says Ranjit, another teacher. “In the peak of winter too it was cold for the students because the school is all open [to the elements].” Additionally, the school does not have space for a washroom or any drinking water facilities.

As the clock turns to 10 am, the teachers wipe clean their whiteboards and the students prepare to head home, quickly winding their belongings into make-shift bags and packets. The teachers huddle up on the now empty benches, discussing their day gone by and the teaching plan for the next day, followed by a fluid discussion on corruption in the political system. Then, Naresh gets a phone call. He has been invited by the Chief Minister’s Office for a congratulatory celebration of Youth for Education, a mentorship program for which Naresh is a coordinator, and under which a few other teachers of Van Phool are mentors. “All of these teachers will also be getting the call soon,” he says. The hint of pride in his voice is difficult to miss.