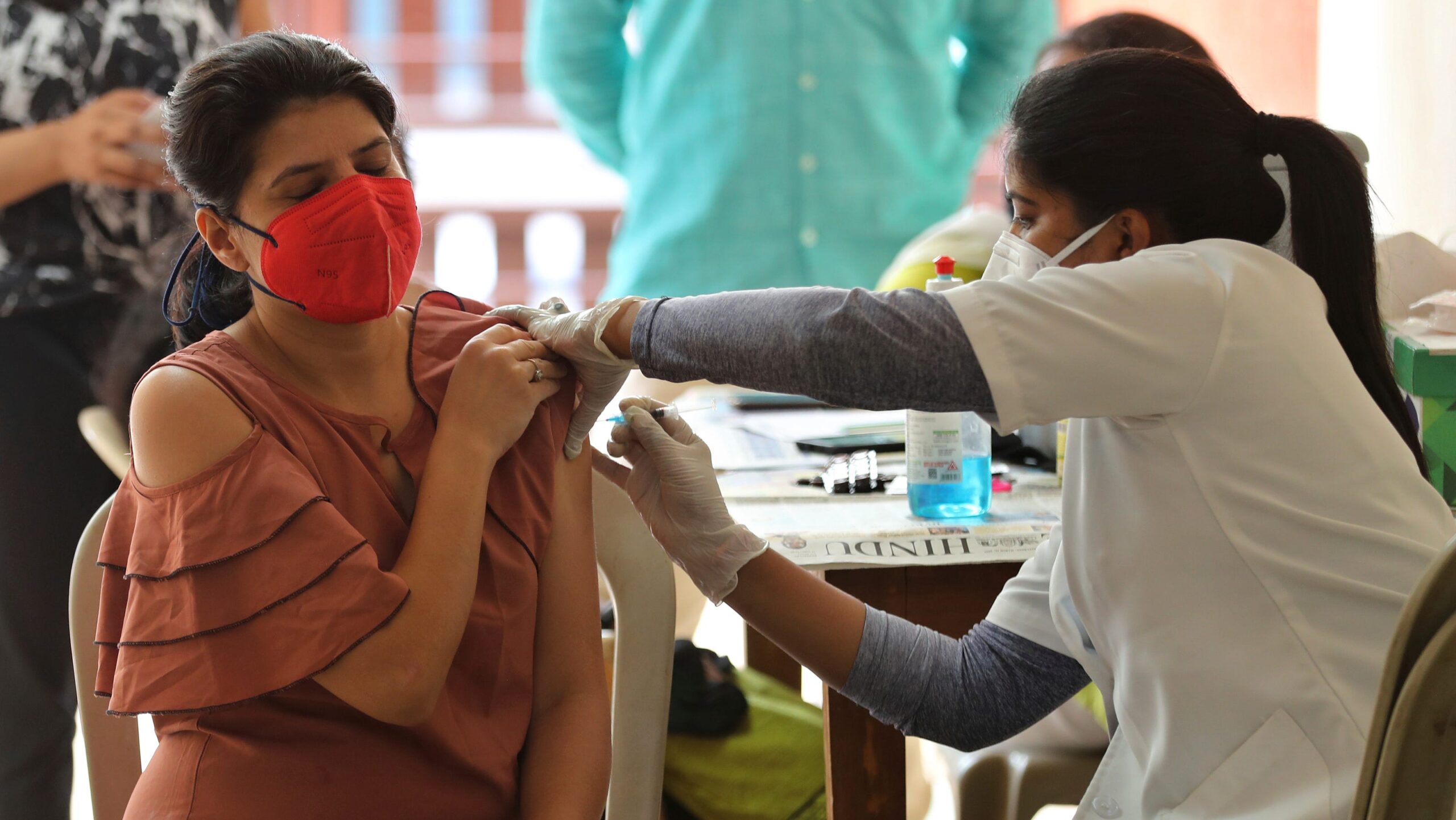 “I began my masters in August 2020. As we were asked to vacate our hostels in the wake of COVID-19, I couldn’t afford to live off-campus and went back to my village in Mau [in Uttar Pradesh],” said Jay*, a 22-year old student studying at Banaras Hindu University. Last week, his university opened a vaccination camp, but how is a student living in a village 150km away supposed to travel for a vaccine, and where would he stay post-inoculation? “I live in a village in Mau where no vaccination, or even awareness has reached,” Jay tells us, adding that, “Vaccination bas akhbaron ki headlines tak pahuchti hai, gaon me nahi” [Vaccination only reaches newspaper headlines, not our villages.]

The Challenge for Higher Education

Jay is one of the 3.74 crore students pursuing his higher education across 900+ universities, 39,931 colleges, and 10,725 stand-alone institutions in India, according to the AISHE-2019. COVID-19 forced colleges and universities to close as far back as April 2020; the 10-month lockdown that ensued caused significant damage to academics and research in the previous academic year.

On May 1, 2021, the Indian government opened vaccination for 18-44 year olds in the country; yet, only 10% of this population had been inoculated as on July 2, 2021. In the month of June, several states began prioritising vaccinating Indian students who were headed for foreign universities by adding them to a list, and by reducing the gap between vaccine doses to just 28 days. On average, as of 2019, 5.6 lakh students went abroad to pursue their higher education. This figure stands in sharp contrast to the average number of students who are pursuing their Masters and PhD degrees within India; 50 lakh Indian students’ futures continue to lie in a lurch, as their universities remain physically shut.

In June this year, several premiere institutes like the IITs and Delhi University held vaccination drives on campus for their students. Yet, state universities and standalone institutions — especially those in Tier I, Tier II cities, and smaller towns — are unable to hold such drives. Urban dwellers are already said to be 1.8 times more likely to receive a shot of the COVID-19 vaccine than their rural counterparts; not prioritising vaccinations for students (and everyone else) involved in India’s higher education sector puts rural youth at a greater disadvantage.

Here’s why India needs to prioritise students enrolled in higher education for the COVID-19 vaccine.

According to UNESCO, the learning losses owing to the closing down of colleges and schools poses intergenerational risks. Studies have documented learning losses, and more worryingly for India, a sharp increase in dropout rates. “Tertiary education is likely to experience the highest dropout rate, and a projected 3.5% decline in enrolment, resulting in 7.9 million fewer students”, the UNESCO report adds.

“The pandemic has impacted education delivery and lack of enough practical [works] is a loss for students. We had called the last semester students during January-March 2021 to the campus for their practical works as they were graduating but others, let’s say first semester students, have missed out,” R.P. Tiwari, the Vice Chancellor of Central University in Punjab, has been quoted saying in Mint.

“Classes happen online, as I tend to do household chores alongside as it is a standard expectation from girls at home. I barely get to concentrate in the online classes,” says Manjula Rani*, who is a final year Master of Social Work student at a university in Sonepat, Haryana. “I am definitely worried about my job prospects [because] we haven’t been able to finish the minimum required fieldwork for an MSW degree. How does one do fieldwork online?” she asks.

In our communities, girls rarely get the opportunity to pursue higher education. The conversations about marriage — which were earlier pushed away due to our ongoing education — have picked up pace. This is because I have been home for almost two years now, which is next to a liability for families in our cultures.

UNICEF has estimated that 10 million additional girls worldwide are at risk of early marriages due to COVID-19. Along with social and economic shocks, the closure of schools and colleges aggravates the risk of early marriages as students are at home, faced with uncertain educational aspirations, and more household responsibilities.

As per a report by Statista, graduates accounted for the highest unemployment rate (16.3%) in 2019: 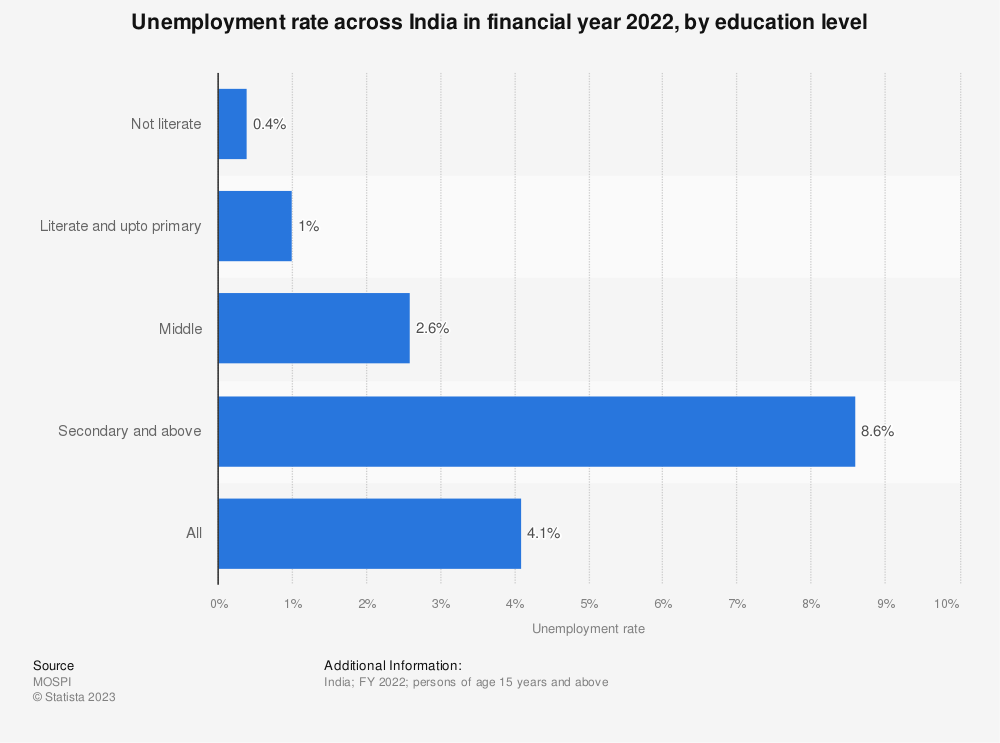 The unemployment rate in the country was higher among youth with higher educational qualifications, even more so than post-graduates. With the learning losses associated with online learning being established, it is safe to expect this unemployment rate to increase as the pandemic forced universities and colleges to go virtual.

A cross-sectional study of the psychological impact that lockdowns had on college students across India between April and May 2020 found what seems to be obvious to all of us today. 53.1% of the respondents reported symptoms of depression, and 37.2% showed symptoms of anxiety. A year and uncountable stressors later, similar lockdowns can worsen their well-being.

By ensuring that students, professors, and staff in higher education are also vaccinated as a priority group in India, universities and colleges will be able to resume physical classes and kickstart the academic year (starting August 2021) with a vaccinated student population in the wake of an anticipated third wave.

What are other countries doing?

Interestingly, Singapore announced that it would prioritize vaccinating students first, “followed by everyone else eligible”. Some universities in the US have made covid vaccination mandatory for all students so as to ensure that campuses are physically opened by September 2021. All vaccination facilities would be made available on-campus for students, at no out-of-pocket cost. China and some West African nations are physically opening universities while being monitored by UNICEF’s COVID education recovery tracker.

The United Kingdom also plans on opening its universities by September 2021, by offering covid support, testing, quarantining and vaccination to all its domestic and international students. Mandatory protocols for students and guidelines for universities have already been issued via the NHS.

In India, the states of Himachal Pradesh and Karnataka are prioritising vaccinating college students to inoculate them by July end, along with Kerala ready to follow suit by planning the phased reopening of colleges by vaccination 18 to 23 year-old students on priority.

What can be done immediately?

In 2020, only 2.5 lakh Indian students went to international universities for their higher education. This number hovered around the 5 lakhs region in 2019, and is expected to rise again this year as international borders (and their universities) slowly open up. The Centre and states are actively inoculating outbound students by opening special vaccination centres and reducing the dose gap, but those pursuing their higher education within India are left out of this priority group. With an in-house population of 3.74 crore students, of which 50 lakh are PhD and Masters prospects, what is stopping us from prioritising students in India to get the COVID-19 vaccine?