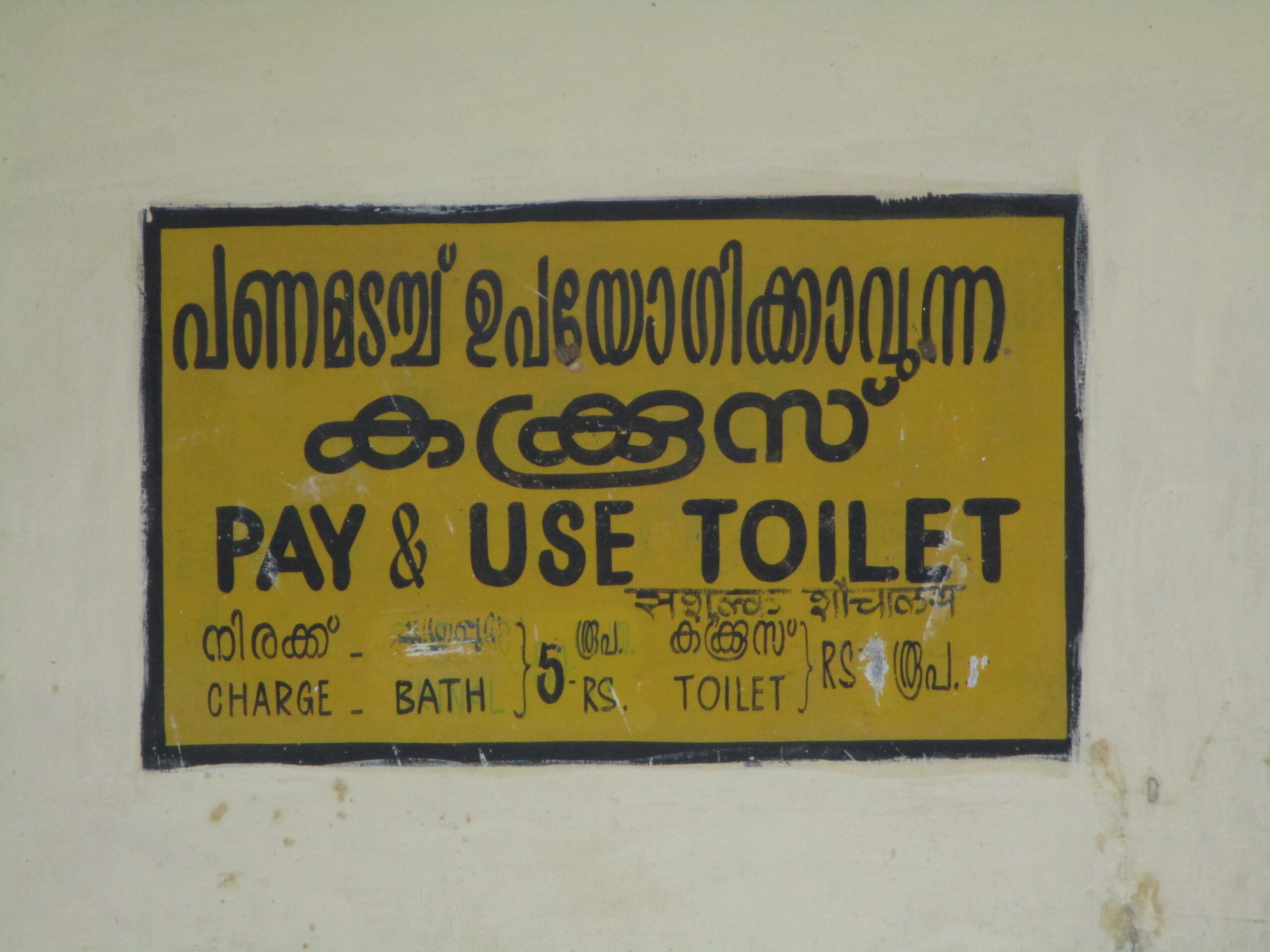 November 19 marks World Toilet Day. Aimed towards raising awareness on those who live without access to safely managed sanitation, the Day also marks taking action towards achieving the 6th Sustainable Development Goal: water and sanitation for all by 2030. India’s efforts towards this cause have been driven through the Swachh Bharat Abhiyan, and more specifically, “Swachh Toilets”.

The Swachh Bharat Abhiyan is considered the world’s largest sanitation initiative, and has positively impacted several districts across the country. Awareness campaigns have certainly played a significant role in this: since it launched in late 2014, the government has used celebrities, athletes, and government officials to share the importance and impact of a Swachh Bharat. Social media has made it easy for citizens to document the progress of the Mission and report on the realities of toilets in their localities.

Although every human being shares the critical need for clean toilets, a range of cultural, social, and biological realities impact and differentiate each one’s sanitation experiences. There is a specific gender angle that hinders access to toilets for women, who account for roughly 48% of India’s population. The inadequate access to private, comfortable, and convenient toilets is one of the most common forms of gender discrimination; for many Indian women, it is gravely inescapable.

On World Toilet Day, India strengthens its resolve of #Toilet4All. The last few years have seen an unparalleled achievement of providing hygienic toilets to crores of Indians. It has brought tremendous health benefits along with dignity, especially to our Nari Shakti.

“My father built a small washroom for the seven of us, however, the elder members of the family are given precedence over using it. During menstruation, I feel a little shy to use the same toilet the male members of my family use, so I use the public toilet in the community. It is not very clean, but it works,” says 16-year-old Priya, from Someshwarwadi, Pune. Girls and women living in rural or low resource urban areas, especially those living in highly populated urban slums, displacement camps, and informal settlements, suffer even more from constrained access to adequate water and toilets. This affects their mental health, can cause physical discomfort, and increases instances of gender-based violence. This is just the tip of the iceberg of different communities’ experiences of sanitation in India.

What is the Mission’s focus?

The Swachh Bharat Mission seeks to ensure that every household has a clean toilet for all members of the family, so as to reduce open defecation. It also aims to create sustainable solid and liquid waste management systems, promote social inclusion by improving access to sanitary toilets for women and marginalized communities, and eradicate manual scavenging.

Over the last five years, the mission has focused entirely on toilet construction and ownership. This is reflected in the allocations made under the program. Research has helped behavioral change practitioners; the Community-led Total Sanitation (CLTS) approach has been strengthened by implementing “the 5Ds”: Depict, Divulge, Demonstrate, Dissuade, and Dignify.

To raise awareness on the Mission, the Centre allocated 33% of its 2018-19 urban budget towards toilet construction, while 50% was allocated towards improving solid waste management. However, over the past five years, it has sanctioned 51% of its share of the urban budget towards toilet construction, and only 38% towards solid waste management. However, focusing on building toilets alone cannot address the nuanced realities of toilet access in India.

The Mission promises a sum of ₹12,000 per household for constructing a toilet. For every household, ₹7,200 of this sum comes from the Center, while the rest comes from the respective state coffers. This plan of action seems to be working, since lakhs of toilets have been constructed and communities all across the country have shifted from open defecation towards clean and hygienic toilets.

However, not all homes have had the same experience. Reports have found that some of these targets were met through coercion and exclusion. Several households in Rajasthan, for example, were forced to build toilets under pressure from various officials who threatened to reduce or cut their benefits. Many low-income and low-caste households were left out of government records if they could not afford to build toilets, painting a rosier picture in the data compared to the on-ground reality. Another survey by the Research Institute for Compassionate Economics also found that Dalit and Adivasi households faced several instances of threats, harassment, and coercion by government officials who were trying to implement the Swachh Bharat Mission.

However, improving access to toilets involves much more than building toilets themselves; community members also lament the lack of water in the newly built public toilets. “It is difficult to use the public toilets at times. Sometimes the corporation provides water, sometimes it doesn’t,” says Rani from Maharashtra’s Nashik district. “Our household didn’t have the resources to build one, so I always have to rely on the public toilet. If it isn’t clean, which is the case most of the time, I have to resort to the nearest farm,” she tells me.

While studies have shown that certain cultures have unique sanitary practices, including girls’ and women’s varying preferences for spaces in which to manage monthly menstruation and other sanitation needs, little attention has been given to the actual design of the toilets that are constructed. For example, many toilets don’t have a shelf for placing sanitary products. Others even lack a lock on the inside of the door, or may not have a door altogether. Many have no electricity for safe use at night and are often built right next to the men’s toilets, which makes women feel unsafe.

Tracking Toilets: The Fault in Our Data

In urban areas, the Centre’s target was to build 67 lakh urban toilets by October 2019. It claims it has already built toilets for four lakh communities. These numbers are reassuring. Or so you would be let to believe.

Unfortunately, the National Family Health Survey found that more than half of the rural households in India still defecate in the open. Even states and districts that have been declared ODF were found to have high levels of open defecation.

This data discrepancy arises due to two major reasons.

First off, the government has been making these ODF declarations on the basis of toilet ownership rather than toilet use. According to researchers, NARSS surveyors were under pressure to get data matching the Ministry of Drinking Water and Sanitation’s for toilet construction.

Another challenge with NARSS is the sample size in use: a total of just 15-20 households have been considered in each of the 6,136 villages across India, out of which 1,259 were declared to be ODF. NARSS confirms the ODF status of 95.6% of these 1,259 villages. However, these toilets, even if constructed with the best of materials, often turn into storage sheds or as stables to shelter 2-3 small cattle during the monsoons.

To complicate matters, ASHA workers and government teachers are made to identify the number of toilets built or in use. “The community hates it when we come to raise awareness about cleanliness or hold them accountable for using the toilets. They aren’t friendly and sometimes we even face verbal abuse,” an ASHA worker from Nashik tells me. “Some households do build, use, and maintain the washrooms, but they are in the minority, so using them as examples doesn’t necessarily help. A sense of dignity for using the toilet needs to be ingrained and be made intrinsic. It’s a long battle towards an open defecation free country and a much longer battle towards the mindset shift,” she adds.

Clearly, triggering behavioral change through “information, education, and communication” is one of the key components of Swachh Bharat. The Mission was allocated the highest advertising and promotional budget as compared to other central schemes in 2017-18. However, there has been controversy around the utilization of funds. 8% of the total Swachh Bharat budget allocation was for promotional content, but in 2017-18, states spent only 1.8% of this share. Instead of creating grassroots-level awareness campaigns on toilet use, most of these funds have been directed towards generating publicity in the media on the Mission’s achievements.

“The ‘Asli Heroes’ of India use and maintain #toilets on a regular basis. What about you? Are you India’s Asli Hero? pic.twitter.com/uefMGsbsUA

The ‘Find My Toilet’/‘Toilet Locator’ tool has great potential for increasing accountability and making it easier for citizens to locate a toilet in urban and semi-urban areas. The same cannot be said for rural and tribal regions, which face unique problems of access and use. Capitalizing the Swachh Bharat Mission’s momentum to put an end to open defecation is a must now, across genders and regional disparities. Not only does it improve the health of India’s children and provide dignity to its women, but it can achieve the larger vision of a Swachh Bharat where sanitation is a basic right afforded to all.

Featured image: a sign for pay and use public toilet in Kerala; photo by ilaveyil from PxHere.

One Health: The Need for Intersections Between Human, Animal and Environmental Health