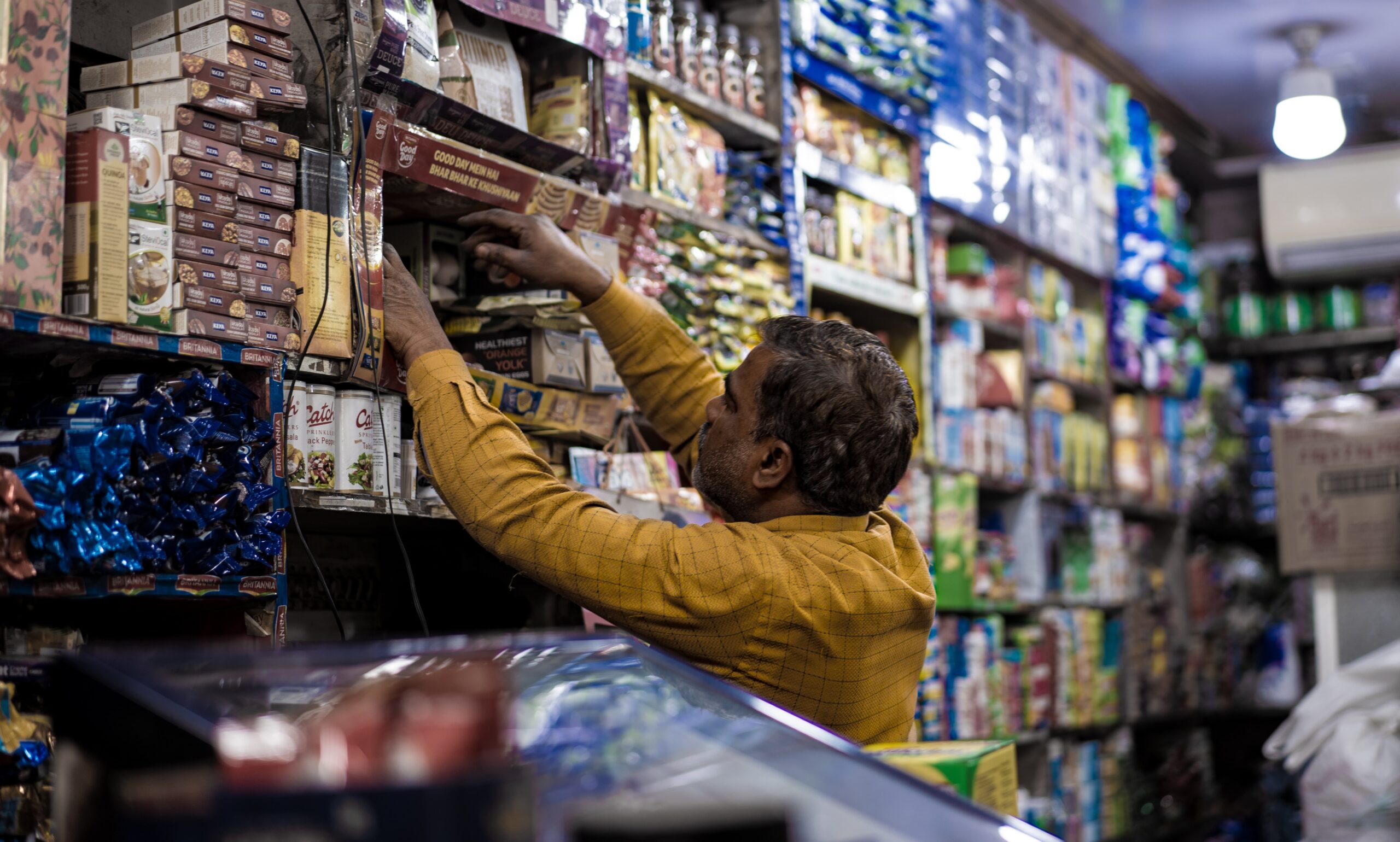 In this year’s budget speech, the Finance Minister announced an allocation of ₹1,500 crore to spur the adoption of digital payments across the country. Experts believe that the Government will use this fund to reimburse micro, small, and medium enterprises (MSMEs) for losses suffered by them in processing certain digital payments—such as UPI transactions. The Government hopes that by reducing losses for MSMEs, it can incentivise them to offer their customers a wider range of digital payment options.

This is a positive step, especially in India, where MSMEs contribute significantly to the GDP and employment but continue to operate in a traditional and fragmented manner. Surveys indicate that only about 5-6% of Indian MSMEs have fully adopted digital technology in running their operations—this impacts their competitiveness in global and domestic markets.

However, digital payments comprise only one piece of the puzzle when it comes to promoting the adoption of digital technologies and online retail by MSMEs—there are various other factors that continue to hinder their digitization. In a report for the Esya Centre, I look at what these factors are, how and why have other nations been able to address them, and how these learnings can be applied in an Indian context.

Indian MSMEs struggle to adopt digital technology due to a host of factors, including a lack of physical and digital infrastructure and skills in using technology. Existing academic research has broadly classified the capacity deficits into the following:

The effective use of digital retail channels requires proper infrastructure, both physical and digital.

Physical infrastructure refers to the logistics sector, which connects MSMEs to other enterprises in the value chain and provides last-mile connectivity for businesses. Indian ranked 44 out of 160 countries in the 2018 Logistics Performance Index, well behind regional competitors such as Thailand and Singapore. The Index measures a country’s performance on a host of logistical measures including timeliness of transactions, tracking and tracing mechanisms, and the state of customs facilities.

Digital infrastructure primarily refers to reliable, secure, and equitable access to the Internet and its services. India has made notable strides in the availability of the Internet and now has more than 690 million Internet subscribers. However, it still ranks a lowly 134 on the International Telecommunication Union’s ICT Development Index, which measures 11 parameters that relate to internet access, use, and digital skills/literacy.

Even though most Indians are now connected to the Internet, a large portion uses it only for basic activities such as accessing social media or browsing. Due to a lack of digital literacy and training, there is less awareness at large as to how to use the Internet to aid everyday commerce. For MSMEs, this creates two problems. First, they struggle to integrate their physical and digital operations without the help of a technical expert. Second, a lack of awareness of digital payments reduces the potential customer base as several Indians choose not to conduct digital transactions.

Additionally, sellers can sometimes be oblivious to the benefits of digitization for their business. This is particularly apparent in sectors where the conduct of business is rooted in tradition and custom, abstract practices difficult to replicate in a digital setting.

A key reason behind the Centre’s push for digital payments is to make loans, funds, and other financial instruments accessible to MSMEs. This is important as only about 16% of such enterprises have access to formal credit in India. The formal and lengthy documentation and verification processes involved in accessing formal lines of credit often deter smaller enterprises from seeking it. This increases their reliance on local money lenders who charge high rates of interest.

The Indian consumer’s preference for cash also stifles the uptake of digital payments and online selling by MSMEs because a large percentage of cash-on-delivery orders result in product returns, which only increases costs for the seller.

The capacity deficits mentioned above can in no way be considered a recent phenomenon. In fact, several Government schemes that specifically target these deficits already exist. For instance, the State’s Digital India scheme aims at providing a reliable internet connection to every village in India. Similarly, the ‘PSB loan in 59 minutes’ initiative facilitates access to loans for MSMEs. The question that needs answering then is why, despite all these schemes and initiatives, are we yet to see tangible outcomes?

A probable reason is the manner in which the Government chooses to implement them. The Indian approach is mostly a prescriptive one, with the Government setting rules and standards for what companies can and cannot do. Further, policies are drawn up and implemented by numerous institutions without the necessary collaboration and togetherness when doing so. The implementation is also largely Government-led, with little to no involvement of the private sector.

On the other hand, countries such as Thailand and Malaysia have adopted a development-oriented approach to digitising small-scale enterprises. The focus of this approach is to make systematic investments in local enterprises in a way that allows them to digitize and compete globally. A study of the development-oriented approach reveals certain principles which enable effective policy implementation for growing digital economies.

The first is agencification: that is, to ensure these investments in MSMEs are made in an efficient and structured fashion, these countries have created specialised agencies. Examples include the Infocomm Media Development Authority in Singapore (IMDA) and the Malaysian Digital Economy Corporation (MDEC). These agencies are usually entrusted with a broad mandate to undertake initiatives that facilitate digital adoptions by MSMEs and consumers. For instance, the IMDA’s ‘SME Go Digital’ programme provides enterprises with the necessary handholding at different stages in their digital adoption process.

The second is planning and goal setting: from the outset, these agencies are geared towards the achievement of clear and specific objectives. For instance, each goal in the MDEC’s roadmap is benchmarked against desired improvements over the 2015 baseline. Data tracked includes the number and percentage of MSMEs using digital marketing services and the percentage of orders that result in successful deliveries.

Thirdly, they are results-based and evaluated ex-post. These agencies usually function outside the traditional bureaucracy, and with a great deal of autonomy in deciding their course of action. And unlike classical systems of public service, where the political executive exercises prior control over decisions taken, these development agencies are held accountable after the fact. Their performance is objectively measured against the goals and objectives identified in their roadmaps and vision documents.

These operations also involve broad-based consultations with relevant stakeholders across sectors. For example, when determining how it could improve last-mile connectivity for MSMEs, Malaysia’s MDEC held several rounds of talks with members of postal unions to determine the best strategy forward.

Coordination is also facilitated by the adoption of a ‘whole of government’ approach. This is usually done through a Committee/Commission that comprises of elected representatives from all relevant Ministries and Departments. The Committee acts as a forum for resolving disputes between Ministries, providing guidance and direction to the Agency, and keeping a check on its accountability.

Policy implementation and execution in India is the mandate of the executive. And so, several executive bodies, such as attached offices, autonomous bodies, and statutory authorities have been created to aid with policy implantation. However, out of all of these, which of these should form the basis for a development-oriented specialised digitisation agency in India?

The ESYA Report recommends that the agency that promotes digital selling—the Indian e-retail Development Authority—should take the form of an ‘attached office’ of the Ministry of Electronics and Information Technology. Attached offices are Offices within Ministries or Departments for ground-level policy implementation, and act as repositories of technical information. More importantly, they will allow policymaking to be separated from its implementation, wherein private sector involvement can also be shaped to specific requirements of e-commerce for MSMEs.

A recent example of such an office with a broad implementation mandate is the National Health Authority—an attached office of the Ministry of Health and Family Welfare—responsible for the nationwide implementation of the Pradhan Mantri Jan Arogya Yojana. It functions independently of the Ministry, until recently was to be headed by a CEO from the private sector, and is accountable to a Governing Council.

As India is yet to finalise rules governing e-commerce, it has an opportunity to adopt a more development-oriented approach and move away from the command and control ethos that has informed previous regulatory regimes. It must seize this opportunity to bring MSME’s retail into the 21st century through digital payments.