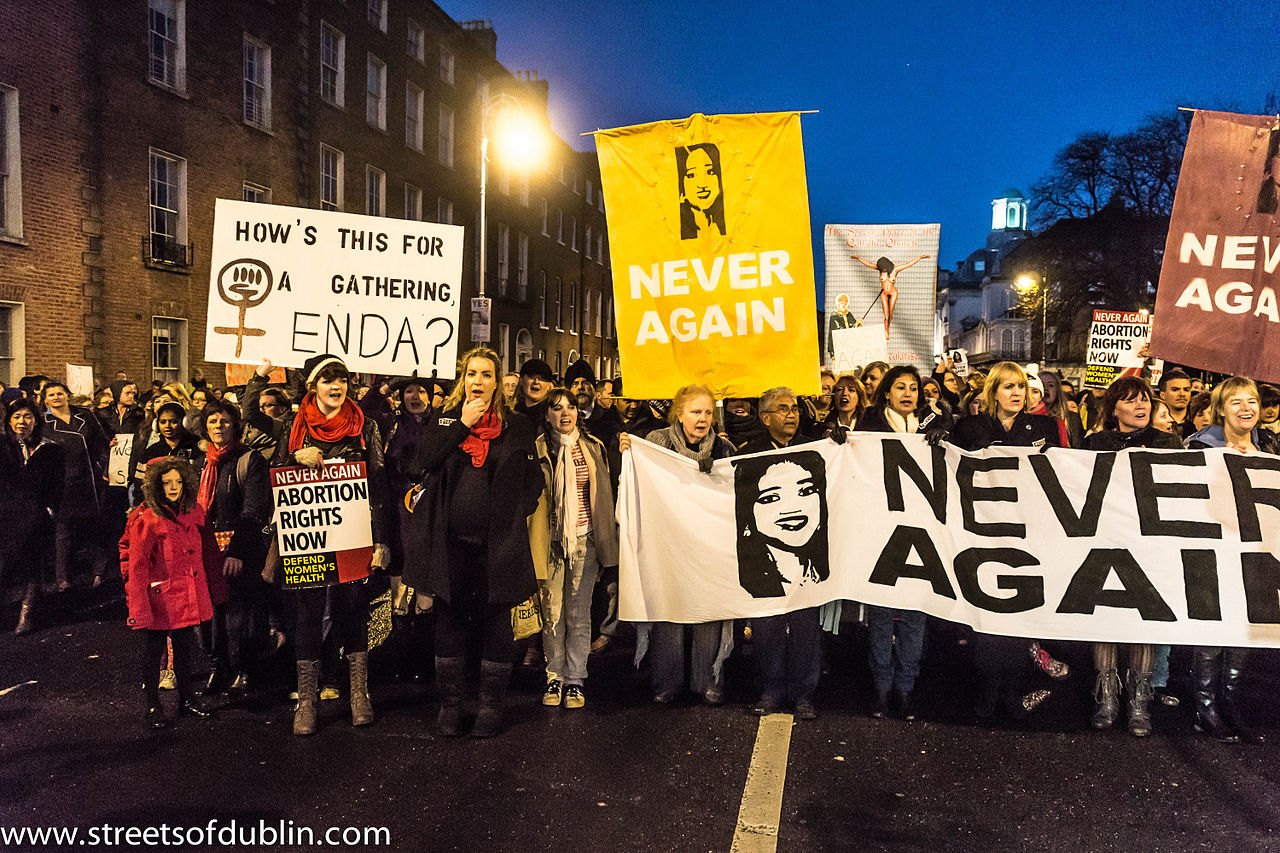 Earlier this year, Catholic-majority Poland’s near-total abortion law came into effect where it declared abortion in the case of a foetal anomaly as unconstitutional. Now, abortions in the country are only permitted in the cases of rape, incest, and when the mother’s life or health is in danger. Poland’s court justified its conservative ruling by claiming that “an unborn child is a human being” and thus is protected under the nation’s constitution that ensures the right to life to all.

Such laws have definitive impacts on women’s health. In its global overview on abortion, the Population Reference Bureau disclosed that 56 million abortions occurred each year between 2010-2014, and nearly half of those were unsafe. Unsafe abbortions accounted for upto 13% of maternal deaths globally, with a majority of them taking place in developing countries.

It seems that unsafe abortions are more likely to occur in countries that restrict a woman’s right to abortion. The woman’s body, always under scrutiny, finds itself under greater surveillance as nation-states, including India, supposedly advance towards modernity.

Why and How Are Women’s Bodies Policed by the Nation-State?

French social theorist Michael Foucault’s concept of power is central to understanding the structure of the modern nation-state and its political philosophy.

Tracing the historical understanding of power, Foucault inspects the assumption that power is linked to sovereignty: that is, the sovereign ruler over a territory uses its absolute and supreme power to coercively keep the citizens in check. The laws of the land came to represent the sovereign, and any violation of it was thus seen as an attack on the sovereign body itself. And so, punishment was a public spectacle reflective of the sovereign’s power—as well as a warning to civilians to not digress from it.

In the seventeenth century, Foucault notes, the sovereign-juridical form of power began to transform. Power was not only the prerogative of the state, but was extended to other modern institutions including the nuclear family, hospitals, prisons, workplaces, and much more. He called this new form of control “biopower”, as it “focused on the species body, the body imbued with the mechanics of life and serving as the basis of the biological processes: propagation, births and mortality, the level of health, life expectancy and longevity, with all the conditions that can cause these to vary.” Simply put: rulers were no longer just controlling social institutions, as science progressed, they were monitoring the actions of the individual bodies of citizens as well. Physical bodies were subjected and made to behave in a certain way deemed “normal” and “civil” through systems of surveillance such as mental hospitals and prisons.

Christopher Pollard, Professor of Philosophy and Sociology at Deakin University, writes, “these institutions produced obedient citizens who comply with social norms, not simply under threat of corporal punishment, but as a result of their behaviour being constantly sculpted to ensure they fully internalise the dominant [society’s] beliefs and values.”

Surveillance, thus, takes place not through coercion, but through the normalisation of specific and deliberate social values.  In The Punitive Society, Foucault examines how in the name of morality and ethics, the State creates surveillance mechanisms over its citizen’s bodies, defining what constitutes  “moral” behaviour, punishing those who do not act in accordance with it. Foucault provides us with the example of how homosexuality was thought of as perversion in the 18th century precisely because of bio-power, which produced and re-inforced specific discourse around homosexuality that normalised its stigmatisation in society.

Two-hundred years down the line, the state is now only even more interested in controlling both the physical as well as political bodies of its population. It is not surprising, then, that abortion laws—and thus anti-abortion laws—have become one of the most debated and discussed topics of the 21st century, affecting the lives of millions of women across the globe, including in India.

What “Modern” Approaches to Abortion Look Like in India

One of the most common causes for maternal deaths in India are unsafe abortions. It is estimated that more than half—around 56 percent—of an estimated 6.7 million abortions performed annually in India are unsafe with 10 Indian women dying everyday because of it. The situation for women in rural India is worse as they often have limited access to safe abortions. As per the Ministry of Health and Family Welfare’s 2019-20 Rural Health Statistics Report, rural India witnessed a 69.7% shortfall in the number of desired obstetrician-gynaecologists. Karuna Singh, state programme manager of IPAS Development Foundation (IDF), an organisation dedicated to preventing deaths or disabilities from unsafe abortions, states that “research shows more than 80 per cent of women do not know that abortion is legal in India and this contributes to women seeking terminations from backstreet providers.”

On the other side, there is a also a lingering concern around sex-selective abortions, with India having one of the highest rates of female foeticide in the world. Although there are several reasons as to why why unsafe abortions take place—including economic constraints, lack of access to childcare, and pregancies out of wedlock—women under pressure from their families may also decide to have sex-selective abortions. To prevent this, the Prohibition of Sex Selection Act (PCPNDT) came into effect in 1994,  penalising sex-selective abortions. This complicates the notion of women’s autonomy and raises the question: is the fear of sex-selective abortion infringing on Indian women’s reproductive rights? Should women’s right over their bodies come at the cost of a future girl child? There are, unfortunately, no easy answers here, yet the Indian State attempts to make redress through legislation.

On March 25 of this year, the Medical Termination of Pregnancy (Amendment) Act, 2021 received the President’s assent. The law, in some ways, seems like a leap in a positive direction, except for one thing—it still does not recognise abortion as a woman’s choice.

The Act has raised the gestation limit for abortions from 20 to 24 weeks—yet this is only for those women who are pregnant as a result of rape or incest. Moreover, the termination of this pregnancy would require the approval of two registered doctors, with only one doctor’s approval required for pregnancies up to 20 weeks. In the case of severe foetal disability, a medical board of specialist doctors, to be set up by state governments and Union Territories under the Act, also has the power to decide if an abortion can take place after the upper gestation limit of 24 weeks.

Now, in this case, one is more likely to think that scientific knowledge operates outside of the realm of politics—that these developments are “scientifically objective” in nature. But, as Foucault reminds us, they are inextricably linked, as science is often enmeshed in the majoritarian political ideology.

The constant interference of medicine in matters as private as abortion exposes the state’s need to control the bodies of its population of women, in order to legitimize its own power. As The Wire notes, “abortion remains tied to the state-sanctioned conditionalities and not the rights of the woman.”

That is, institutions such as hospitals create a system of knowledge that defines behavioural norms. Medicine too is not just an objective body of knowledge, but also a “guardian of morality.” The doctors and hospitals in this case are the ultimate judges who are defining what type of abortion is legitimate or not, criminal or not criminal, moral or immoral, normal or abnormal. And so, they play a crucial role in the decisions made under the proposed abortion reforms.

Giving such increasing power in the hands of doctors and medical practitioners is concerning. Abortion is still a stigmatised practice in India and it is entirely possible that doctors can deny abortions on their “moral” grounds, implicitly dictated by social “norms”. Similar is the case if a woman wants an abortion due to mental health issues—also a taboo topic in the country—doctors can withhold the decision, on the grounds that it is not serious enough. The case is still this—a woman cannot go to a doctor and say she wants an abortion because it is her body and she can choose what is best for it. If the doctor denies her, then that is the last word. Such unpredictable access to abortion can increase the chances of unsafe abortion practices. Why? Because good reproductive health and human rights go hand in hand.

In 2017, the Supreme Court made a landmark judgement by ruling that a woman does not need the consent of her husband to secure an abortion. The court recognised that privacy is a “guaranteed fundamental right” and that it is within the ambit of women’s personal liberty to make their own reproductive choice. The statement read:

But the current MTP Act seems to be at odds with this progressive judgement because women still do not have the ability to make their own reproductive choices under it.

In a similar vein, Uttar Pradesh has recently released a new policy in a bid to control the state’s growing population. Under it, those with more than two children cannot receive promotions, government jobs, or benefit from government subsidies. It is true that a huge population is a hurdle in the process of development, but instead of improving health and family planning or educating its public—all rights guaranteed to Indian citizens—the state resorts to creating docile and subservient bodies.

Yet, Foucault’s conception of power is not all pessimistic. In fact, he puts forth the notion that “where there is power, there is resistance.” One is never fully trapped by disciplinary power, as there is always a counter-discourse taking place at the same time. The real-life examples of it can be seen in the form of protests worldwide against conservative abortion laws, almost always led by the women they intend to control.

Featured image: protests in Dublin in recognition of the death of Savita Halapannavar, a dentist of Indian origin working in the Republic of Ireland. On October 21st of 2012, Halapannavar was refused an abortion after an incomplete miscarriage, as most abortions are prohibited in the country under the Eighth Amendment of the Constitution of Ireland. Halapannavar died the next day. Her death resulted in huge public rallies, agitating for the repeal of the amendment—which finally took place in 2018. | Courtesy of William Murphy (CC BY-SA 2.0).

“Our Handwriting May Be Bad, But Our Message is Clear”: Doctors Are Worried About Climate Change