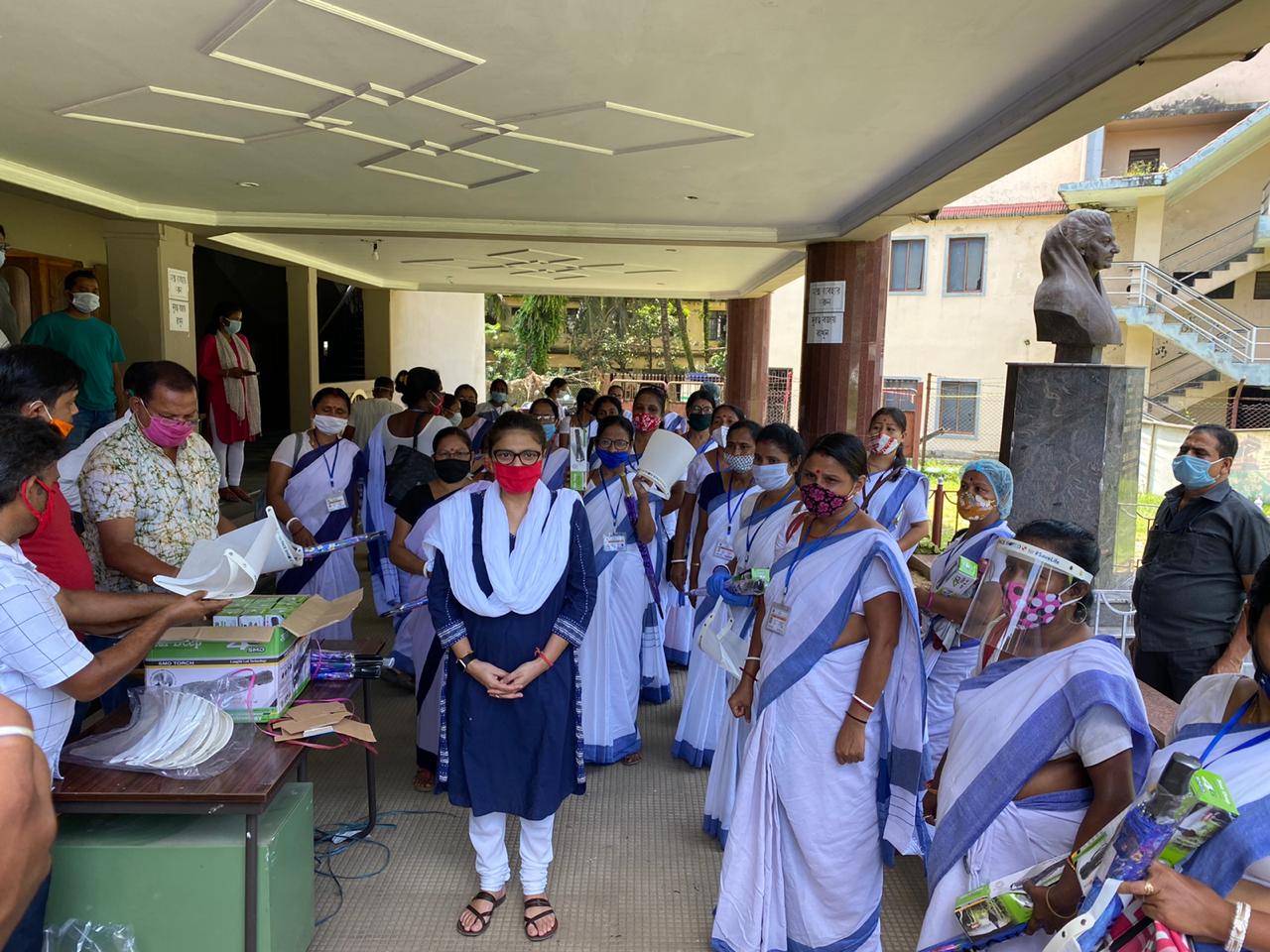 Health workers such as Accredited Social Health Activists (ASHA), among others, have been part of the National Health Mission (NHM) since 2005. An ASHA worker’s responsibility is to provide every village with community health services by linking them to the nearest government primary health care centre. According to the Ministry of Health and Family Welfare, as of 13th March 2020, there are 1.4 million ASHA workers in India.

However, even 15 years after working towards universalising access to the benefits of public healthcare, ASHA workers are not being given their due respect and pay, a situation further exacerbated by the pandemic. ASHA workers, termed ‘foot soldiers’, are the State’s first line of defence in responding to the COVID-19 pandemic, and went from door to door to check on families, maintained the record of active cases in their areas, and spread awareness about COVID-19 precautions, all of which increased their workload by 4-5 hours every day.

Today #ASHA workers across India are holding a virtual protest demanding better working conditions and respect.
Sangeeta of Etawah (UP) has the following demands

Even though a crucial component of India’s healthcare system, ASHA workers are not given fair compensation and termed as voluntary workers by the Indian State. This is largely due to the burden of unpaid care work—that unfairly falls on women healthcare workers—that is built into social policies.

What do ASHA workers do?

To be selected as an ASHA worker one has to meet certain criteria. Among others, ASHA workers have to be women residing in the village wherein they are appointed; they must also be literate, ideally having completed grade 10. Once selected, ASHA workers must undergo rigorous training before they can begin work. Although not a selection criterion, a study conducted on behalf of the National Rural Health Mission (NRHM) also found that women in these positions had a desire to serve the community, a priority that was followed by the desire to contribute to their family income.

For ASHA workers, referred to as voluntary workers by the government, their income is paid in the form of honorariums, along with performance-based incentives. While these incentives vary from state to state, these payments are usually delayed. Moreover, the ASHA’s compensation system is rather complex, comprising variable components that are linked to defined tasks (for example, ₹100 for full immunisation; ₹50 for reporting child death; ₹1,000 for reaching out to 42 tuberculosis patients over 6-7 months). Given their extra duties during COVID-19, it only seems natural that these performance-based incentives would also increase.

However, unlike a typical appraisal where additional responsibilities are accompanied by additional pay, ASHA workers are given a COVID-19 allowance of a meagre ₹ 1,000 per month across all states. In conversation with ASHA workers, we gathered that although payments were being made, they were generally delayed, and not proportionate to the amount of work undertaken. What’s more, in some states like Tamil Nadu, the number of incentivised non-COVID tasks has dropped from 32 to 7 or 8. Payments for these haven’t been made for the past 4 to 7 months. For Sunita*, an ASHA worker from Jharkhand, even though the number of incentivised tasks has not changed for the state, “the incentives for vaccination has reduced from ₹50 to ₹35.”

In 2018, 2019, and most recently in August 2020, ASHA workers and midday meal workers held several protests as their demands for a fixed income between ₹18,000- 21,000, a pension fund, insurance, and benefits similar to those received by government employees, have not been met.

In September 2018, Prime Minister Narendra Modi announced that the monthly honorarium of ASHA workers would be increased, and that they would also be brought under the coverage of various social security schemes. Recent protests show that, in most states, this change in incentives has not been implemented.

A massive protest by ASHA workers in Bengaluru today against Modi’s visit demanding their pending honorarium not been paid by Central Govt since 15 months pic.twitter.com/qORD3ErUtO

The unequal pay structure in the health sector makes women—the backbones of the ASHA system—especially vulnerable in times of a health emergency. ASHA workers, in particular, are facing a “double burden” of responsibilities—longer hours at work and additional care work at home. By refusing to raise the status of ASHA workers to that of government employees with fixed pay, among other things, state welfare and development schemes are potentially worsening gender inequality. This further reinforces society’s gendered assumption that female healthcare workers should be altruistic and acquiescent.

“There is no one to listen to us. If the government can get their work done by paying ₹2,000, why would they agree to pay people ₹10,000 for the same amount of work?” —Sunita, ASHA worker from Jharkhand

As economist Padmini Swaminathan argues, terming ASHA workers as volunteers “reiterates the view that these women implementing India’s health and nutrition goals at the grassroots level are merely honorary volunteers and not actual workers.”

These perceptions may trickle down into how ASHA workers are treated when on the field, given that they have reported being ill-treated by existing medical health workers. An ASHA working in Uttar Pradesh’s Agra district was made to wait outside a hospital in the freezing cold when she accompanied a woman in labour. They died later due to complications from exposure to the cold. In another instance, ASHA workers were hurled stones at, spat on, and some locals even tried to snatch their phones while on COVID-19 duty in one of Maharashtra’s containment zones. To add insult to injury, despite being essential workers, ASHA workers have not been provided with adequate protective gear while on COVID-19 duty. Additionally, ASHA workers also pay for their own travel and food while on duty, said Sunita.

The lack of respect accorded to the profession also affects the tasks many ASHA workers are eventually handed. Despite the crucial work they perform, ASHA workers also end up doing a lot of paperwork, often in the form of data collection on different health indicators such as institutional deliveries, data on blood pressure, and the number of women in antenatal care. In some cases, ASHA workers are also enlisted in door-to-door tasks, such as counting the number of houses in a village, to counting cows and buffaloes in the community. They are also responsible for collecting data for the Election Commission.

ASHA workers were heckled by a group of unidentified miscreants while they were conducting a survey in #Bengaluru | @NehaHebbs reports pic.twitter.com/gxI4TYpLwg

ASHA workers are viewed as temporary healthcare workers, seemingly indicating that the ‘voluntary’ system they operate in is temporary. But, an increase in the number of appointments of ASHA workers, from 8,25,000 in 2010 to 10,47,324 in 2020, confirms that this system is not going to go away soon. And why should the ASHA system be disbanded—after all, these workers form an important link between the rural population, health care sector, and the government.

A Lancet study assessing 32 countries estimates that the financial value of women’s contributions to the global economy in 2010 was 2.35% of the global gross domestic product (GDP) for unpaid work, and 2.47% of the GDP for paid work. Activities such as cooking, cleaning, caring for children, elderly, and the ill, and in some cases emotional labour, all form part of the unpaid care work essential for the wellbeing of society. Policies have been unable to account for this work since these roles are unaccounted for in standard work metrics, and are often too intangible to quantify.

These trends are paralleled in the treatment of ASHA workers, given that they work in close proximity with communities. ASHA workers constantly navigate between emotions that are felt, and ones that are projected. This gives rise to emotional labour which is an important part of these women’s unpaid care work affecting their own mental health. ASHA workers also work with women, children, and care for the ill and elderly in the communities, tasks traditionally perceived as women’s duty, and often relegated to unpaid labour. The state thus relies on ASHA workers for the crucial role they play in the welfare system, but denies them welfare/social protection by rendering them as volunteers.

A 2019 study by the World Health Organisation (WHO) indicates that women make up 70% of the workers in the health sector globally, and are less likely than men to be engaged in full-time employment. Women around the world also receive lower pay than their male counterparts for the same work, thus making it easier to underpay and undervalue their work. The fact that ASHA workers are trained practitioners who perform health- and education-related tasks for compensation, but are still deemed poorly-compensated volunteers, points towards the failings of policy, and its inability to recognize the value women’s work at large.

*Name has been changed to protect identity. | Featured image: COVID-19 safety kits being distributed to ASHA workers in Silchar;  courtesy of Sushmita Dev via Twitter.