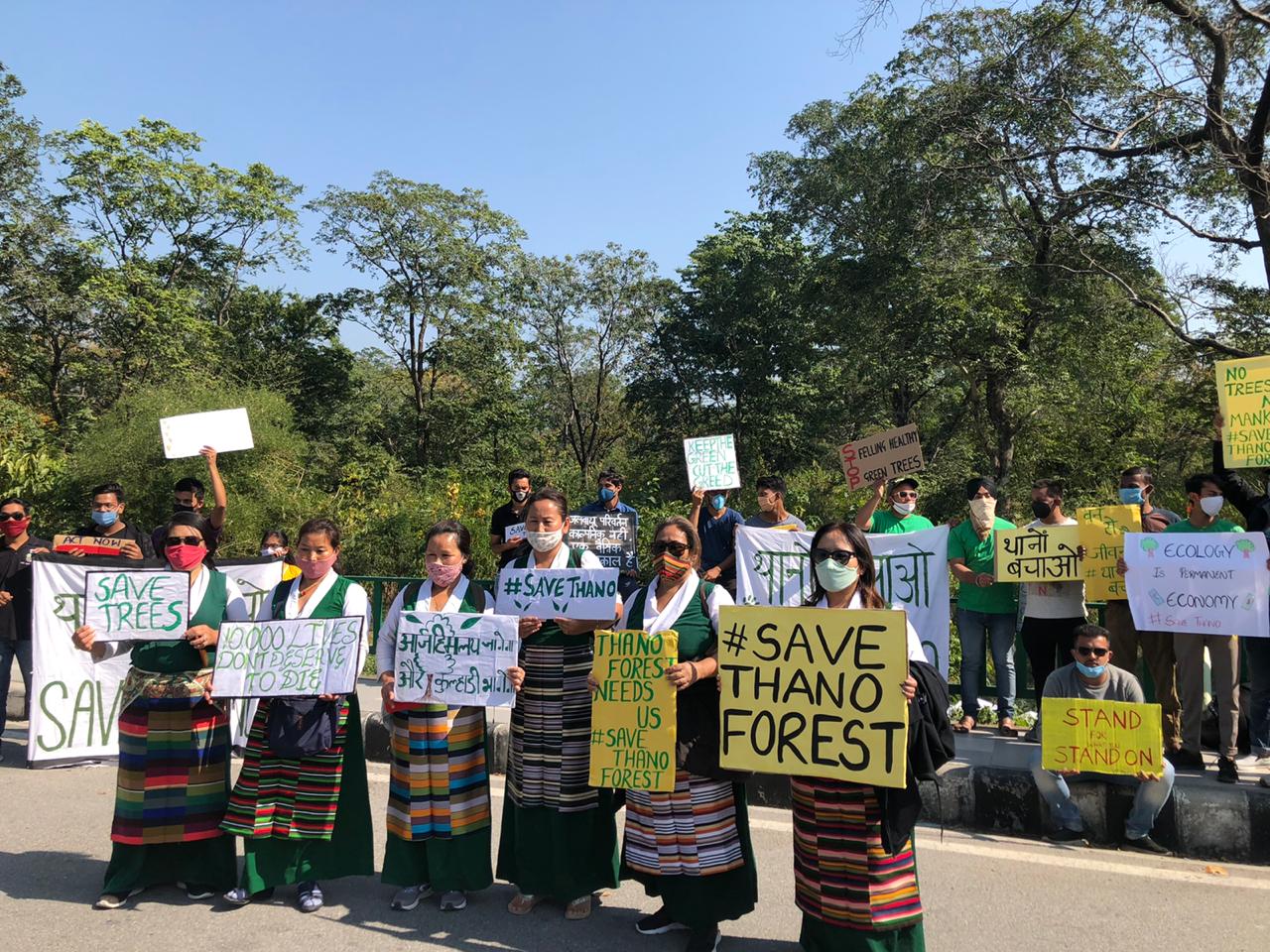 Two years ago, drivers on the Doiwala-Rishikesh-Dehradun road were in for a surprise. An elephant walked onto the road. Traffic was disrupted and people panicked. But, people are used to incidents like this, as this major highway pierces through and along the Thano and Barkot ranges, adjacent to Uttarakhand’s  Rajaji National Park—which are home to local elephant populations.

The highway is barely a few kilometres from Dehradun’s Jolly Grant Airport. Currently, the Airport Authority of India (AAI) is seeking clearances from the Uttarakhand state government and the Centre to expand this airport. This expansion is to make way for a new terminal building, a larger parking lot for planes, a longer airstrip, and multi-level car parking. To make this happen, the AAI is seeking a clearance from the National Board for Wildlife to procure a massive 243 acres of forest land, which would mean cutting Thano’s 10,000 trees.

Functional since 2008, the Airport hugs the outer-Himalayan Shivalik Ranges and nestles between the homes of the elephants—one of the many Schedule I fauna found here. Animals under this schedule receive absolute protection and offences are awarded the highest penalties under the Wildlife Protection Act, 1972. Regardless, the Environment Impact Assessment (EIA) Report for the airport expansion states, “No schedule I fauna has been reported in the study area probably due to absence of any dense forest.”

“The EIA is not the only unclear paperwork for this project,” Soumya Prasad, a tropical ecologist and research associate with Nature Science Initiative says. “Even the number of acres for which clearance is sought varies in different documents.” Soumya is right about the documents’ vagueness—while the 2018 Environment Clearance letter recommends the “construction of a new terminal building, with allied facilities,” news reports now suggest that the airport’s runway too will be extended.

“The rest of the forests here are already under threat from railway lines, increasing construction, and encroachments,” says Soumya. “By clearing the remaining forests, we are shooting ourselves in the foot.”

If this is the case, then what is motivating this expansion?

A Strategic Location for Tourists and the Airforce

Since the state shares its borders with China and Nepal, the Indian Airforce had requested for the expansion of three airports in Uttarakhand earlier this year—Pithoragarh, Pantnagar, and Jolly Grant. This, the Indian Air Force (IAF) argues, would help forces install air defence radars and advance their landing grounds too.

While recent news reports comment on the airport’s strategic importance, the project’s pre-feasibility report gives only one justification—Jolly Grant’s existing airport building capacity has already reached its saturation for passenger traffic and flight operations. This would aggravate inconveniences for passengers by 2021-2022, when passenger traffic to the airport is expected to increase by 55% compared to 2016-17. Uttarakhand’s prized possessions ranging from the Chardham Yatra to the Valley of Flowers Trek have made tourism a lucrative revenue-generating activity for the state. Between 2001 to 2018, the influx of tourists—both domestic and foreign—has increased by 230%.

“A large influx of tourists in Uttarakhand come from Gujarat and Telangana, for whom at present there are no direct flights available to Dehradun. They have to get connecting flights from New Delhi mostly,” explains Jaspal Chauhan, the District Tourism Development Officer, Dehradun. “An expanded airport will make these facilities available.”

Niharika Mehra, a volunteer with Save Thano, believes that this increasing tourism exacerbated by the airport’s expansion will lead to unregulated tourism. 300 volunteers strong, Save Thano is a citizen movement that carried out a symbolic Chipko movement last month opposing the airport’s expansion. “If you look at Dehradun and Mussoorie during the peak seasons, there is no place to park your car. There are traffic jams everywhere! When this new wave of tourists comes, there will be immediate pressure on the resources here,” she says.

“When people from cities come to homestays in Thano village within the Thano range, it is to enjoy the clean air and the trees. What tourist would come here without all that?” says Prateek Bahuguna, a general manager with a hotel group who also manages a homestay in Thano.

The pressure on resources is already visible. A 2018 study on Dehradun revealed that due to tourism, haphazard construction in the city is now perched on very steep slopes, which are prone to landslides and other natural disasters. The pollution of the Ganga due to unregulated camping activities along the river in nearby Rishikesh also led the National Green Tribunal to ban camping there in 2015.

You may also like: In Her Opinion: Dr. Sejal Worah on Restoring a Forest in Uttarakhand

But Jaspal Chauhan seems to be ready with a plan. “This is a question of management. We at the tourism department are trying to promote newer destinations aside from the popular ones like Mussoorie and Nainital, so that no one area comes under pressure for resources.”

If tourism in the state is not managed efficiently, the rationale behind expanding Jolly Grant Airport might do more harm than good to the ecologically sensitive state. Yet, while that is a threat post the expansion itself, there is a greater peril at hand. If the project goes through, the expanded airport will be standing upon a lost treasure which amongst many functions, is also currently quietly battling against climate change.

Made this video while i was stuck in a traffic jam that lasted for 1.5 hrs.. It makes me sad to feel the plight of uttarakhand and the slow pace of work.. Life is risky but still we travel, roads are not well maintained, is this the digital india we dream of? Time shud b valued pic.twitter.com/pilpO11wGU

Such is the ecological richness of the project site for the expanded airport, that 14 reserved forests exist within a radius of 11 km of it. These areas together are significant for carbon sequestration, or the process of capturing and storing carbon present in the atmosphere. A 2015 study by Shahid et al. showed that in three of the 14 forests mentioned above, the carbon dioxide mitigation share, which shows the level of carbon sequestration, ranged from a commendable 27% to 37%. Ironically, the study was conducted by authors from the Indian Council of Forestry Research and Education, an autonomous body under MoEFCC, which is the same Ministry that approved the environmental clearance of the Jolly Grant Airport.

“When the climate changes, animals from warm, tropical forests need to migrate to cooler, temperate forests. Since the forests in the Doon valley are at the foothills of the Shivaliks, they provide the perfect corridor for this migration to cooler habitats to happen,” says Soumya Prasad who has studied this landscape extensively. These extremely unique forests then—which are currently facing the axe—are the only way out for animals to survive amidst climate change, a phenomenon that the state is already dealing with. Extreme weather conditions like the 2013 flash floods in Kedarnath are a case in point, along with changing agricultural patterns due to temperature changes. Larger cities like Dehradun are experiencing a steady increase in temperatures too; between 1978 and 2007, the mean temperature increased by 0.54 degrees celsius.

It’s Not Just About the Trees

The loss of the 10,000 trees is just the tip of the ecological iceberg. Thano’s large Sal trees function as a breeding ground for the Great Slaty Woodpecker. Categorised as “Vulnerable” by the International Union for Conservation of Nature and rarely found in India, this bird’s global population has crashed by 90% in the last 100 years. They live in flocks of 6 to 7 birds, and need “old growth” forests for their large nests, which they find easily in Thano. A study on the breeding patterns of the woodpecker in Thano recommended that the “remaining old-growth stands of Sal forest be conserved…to conserve these species.” Beyond just that, over 200 bird species have also been recorded in Thano by the citizen science database, Ebird.

Thano and its neighbouring forests also function as wildlife corridors for the movement of animals within the numerous forests. “These corridors are like delicate threads that hold the forests together and are used by animals including tigers and elephants intensively,” says Soumya. In the recent past, however, roads and other developments through the forests have left a dent in the corridors. A 2015 report showed that while tigers were able to travel from Corbett National Park in Uttarakhand’s Nainital district to Rajaji National Park comfortably, they found it difficult to travel further west of Rajaji. Barely 1.5 kilometres of the forest is left between the two sides of the park. So where will these animals—who have roamed these areas freely for years—go?

Quite simply, they will end up on the roads and in agricultural fields. “We used to joke earlier, that elephants in the Dehradun area are innocent and don’t harm people like the ones in south India’s Nilgiris do, but after the airport’s construction, the elephant-human conflicts have increased tremendously,” says Soumya. The expansion will worsen this: lesser movement for animals, and more human-wildlife conflicts.

“Development will not end with only the airport’s expansion. Most airports have an entire milieu of economic ventures surrounding them, including large hotels. Won’t the government push for the same here too, all at the cost of these forests again?” questions another volunteer of Save Thano, who wished to remain anonymous.

A week ago, the MoEFCC asked the Uttarakhand state government to “consider avoiding sensitive areas of the Shivalik Elephant Reserve while exploring land suitable to use for the expansion.”

“On the one hand, this update made us hopeful about saving Thano, but on the other, we are well-aware that this is merely a suggestion, not an order,” says Niharika. Save Thano carried out a huge march on 8th November to continue the fight, a day prior to Uttrakahand Diwas.

“Look at the Supreme Court’s Order in September 2020 on keeping the width of the Chardham four-laning project [in Uttarakhand] to only 5.5 metres in this ecologically sensitive area. But, by the time this order came, more than half of the construction and hill cutting of up to 10 metres width had already been done,” Niharika continues. “So, for Thano, strict orders need to be implemented and followed; and the time is now.”