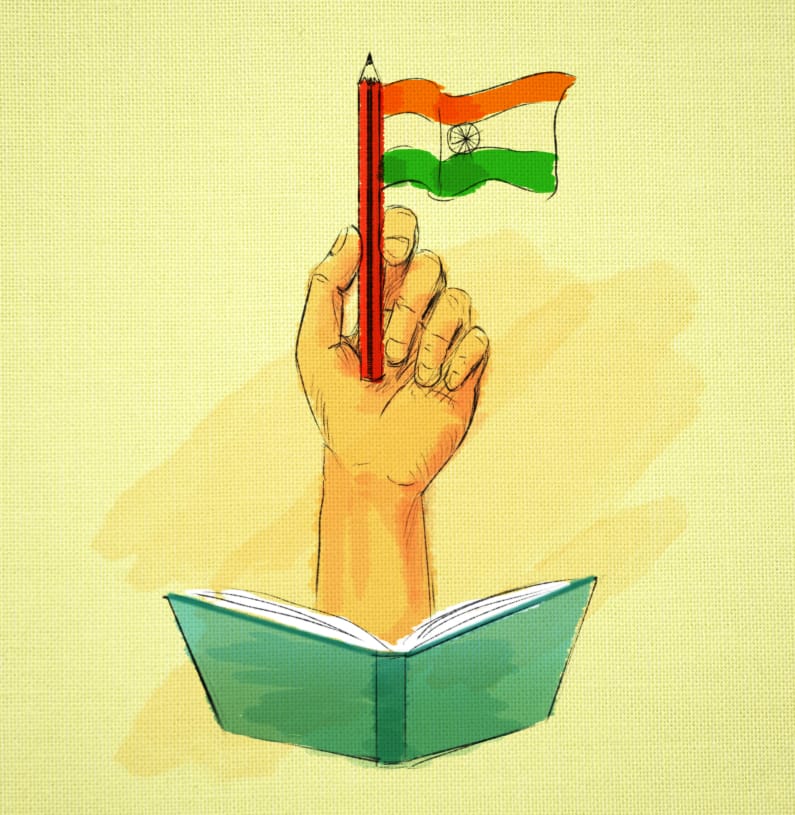 As student protests boil over the country, I am reminded of the Chinese curse, “May you live in interesting times.” For interesting times’ are indeed what we are living in today – not just in India, but across the world. Consider these events:

It seems like in these interesting times, we are fundamentally unable to digest that our students are far more intelligent, aware, and educated than we consider them capable of. Is participatory politics–the bread and butter of any democracy–really so disjointed from students’ education? More importantly, when we discourage young political opinions, are we preparing our students for the role they have to play one of the largest democracies in the world? Are we listening to their voices? And are we preparing them to have a voice?

From the Cradle of Democracy, to the Colonial Proponents of it

Since democracy is by the people, by extension, the art of politics is for all people too, right? Before we surmise that, recall the philosophers from the ancient cradle of democracy: Socrates and Aristotle. Interestingly, neither Socrates nor Aristotle were fans of democracies where everyone had a right to vote and choose leaders. In Plato’s The Republic, Socrates explains his sentiments through the following analogy.

Suppose all of society is heading out on a sea-journey. You need to decide who runs the ship. Who would you rather have deciding who is in-charge of the vessel – any of the passengers, or only the people educated in the rules and demands of seafaring? And so, Socrates asks: why do we think that any old person would be fit to judge who should be the ruler of a country?

Socrates’ point is that both voting and selecting one’s leaders are skills that need to be systematically inculcated in people. Else, even the purported ‘best’ forms of government can lead to catastrophic consequences for a country’s people. These ideas trickled down Western civilisation, into the minds of the British especially, who introduced ‘modern’ education systems to India in the 18th and 19th centuries. Those cultural values live on: the United Kingdom has instituted compulsory ‘citizenship education’ for almost twenty years now. First recommended in 1998 by Sir Bernard Crick, a political theorist and the first President of the Association of Citizenship Teaching, citizenship education is seen as the only way to nurture active and critically thinking citizens.

“We aim at no less than a change in the political culture of this country both nationally and locally, for people to think of themselves as active citizens, willing, able and equipped to have an influence in public life and with the critical capacities to weigh evidence before speaking and acting” — Sir Bernard Crick

Fast forward back to 2020 now: while we continue to enforce the draconian laws of our colonisers’ past, we are yet to imbibe the same spirit of education they currently promote. As millions of our students pass through years of ‘modern’ schooling, and finally reach the voting age of 18, are they building the knowledge and skills to become meaningful participants in our vibrant democracy?

The State of India’s Civic Education: How to Move Forward

Why should schools be bothered about political education? Because students already live in a world where they are constantly exposed to fake news and screaming news channels. Even within the school premises, textbooks are often written from politicized perspectives, and increasingly, polarising events are also being held. This makes it crucial for students to have a formal constructive learning place where they can hear multiple perspectives on an issue, rather than solely relying on informal spaces where people tend to take extreme views.

This is how communal RSS sows seeds of hatred in young minds too.pic.twitter.com/vyic0UiULU

What is even more essential is that students learn the skills of disagreeing respectfully and rationally, and also, that it is okay to change one’s views in light of new facts, instead of being wedded to ideologies. Democracy and voting don’t work based on intuition, but on the analysis of candidates and issues. Learning these skills is important so one does get to hear things like “Everyone is protesting, so something must be wrong.” How do we build these attitudes, though? 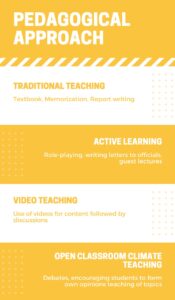 However, how many classrooms in our country today actually create such Open Classroom Climate or even an Active Learning environment – it’s probably easy to guess. Any improvement in civic education would probably involve bringing ‘politics’ in the classroom which has hitherto been seen as a no-go.

Take this recent example with a colleague of mine. In light of the recent CAA protests, he sought to find out about how bills are made into laws. When he found the process online, he realized that he had memorized it in high school. But, that information was forgotten as soon as the exam was done. Therefore, while our curricula does prescribe civic education, it is taught and learned mechanically, without any relevance to real-life, arguably, to avoid ‘politicizing the classroom’. Past events or current affairs are drily laid out, with little reference to their larger political context to a citizen of the country. All this makes civics the simple subject of learning fancy words such as habeas corpus or fraternity without understanding what they mean to a student in real life.

So, how should we be discussing civic and citizenship matters with our students then?

When one talks about political education, somehow, we imagine ‘indoctrination’ instead. There are real concerns over teachers and schools feeding their political leanings and biases on to vulnerable, unknowing children. This idea needs to be challenged. Political education is more about teaching students how to think than what to think.

The table below is based on the different dimensions of political education as per the Declarative-Procedural Knowledge framework used in civic education in the US & UK, and my own experiences as a Social Studies teacher and citizen who found herself high and dry when it came to knowing about the country’s politics. Such frameworks could prove to be a good first step in developing curricula around political education. 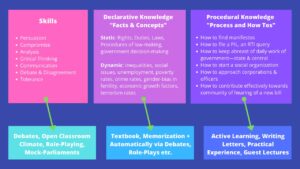 There is an urgent need to incorporate all of these pedagogies, along with a focus on creating Open Classroom Environments and Active Learning, if we want to see our students become responsible, “justice-oriented” citizens who work towards bringing real change in our society.

The Long Road Ahead

Educating children in political education isn’t easy. Ask the British, even after nearly twenty years of compulsory citizenship education in the United Kingdom, the state continues to research on political education pedagogies, only to find that teachers aren’t armed with sufficient training and agency to help create ‘justice-oriented’ citizens. But, that only goes to show how important it is for us to start. In that regard, it might be better for India to follow the Canadian model where political education is facilitated by the local electoral commission. This could ensure minimal state bias and continued community engagement.

As a teacher myself, to begin with, it is more important to discuss public issues rather than the “parties” raising them. Naming specific parties can create biases and pave the way for polarised discussions. Instead, having discussions on a hypothetical candidate or party can help create awareness and build critical thinking skills with minimal prejudice. Such models may also help develop the nuanced understanding that parties and people are a summation of ideas, and are neither always right nor always wrong – something gravely missing in our polarised political mindsets today.

In Development As Freedom Amartya Sen talks about five types of freedom that any development should enhance. For Sen, the end-goal of development is not just economic growth in terms of GDP or income, but an increase in the freedom of an individual. These enhanced freedoms are economic, political, and social. Political freedom is especially significant in a democracy as it can lead to further economic and social freedoms. But without education and knowledge, political freedom remains meaningless. In the absence of meaningful political knowledge amongst the public, a ‘democratic’ state presents nothing more than an illusion of choice to its citizens.

Instead of being passive consumers of any agenda-driven government, only a well-educated public can shift policy discourse to issues that significantly affect them. A democracy is not run by ‘selfless’ individuals servicing the public, but by a self-interested, active, and educated public. It is crucial to realise this from a young age in school. Only then will our citizenry rely less on the dubious political knowledge from Whatsapp University when trying to fully understand the issues that affect the country. 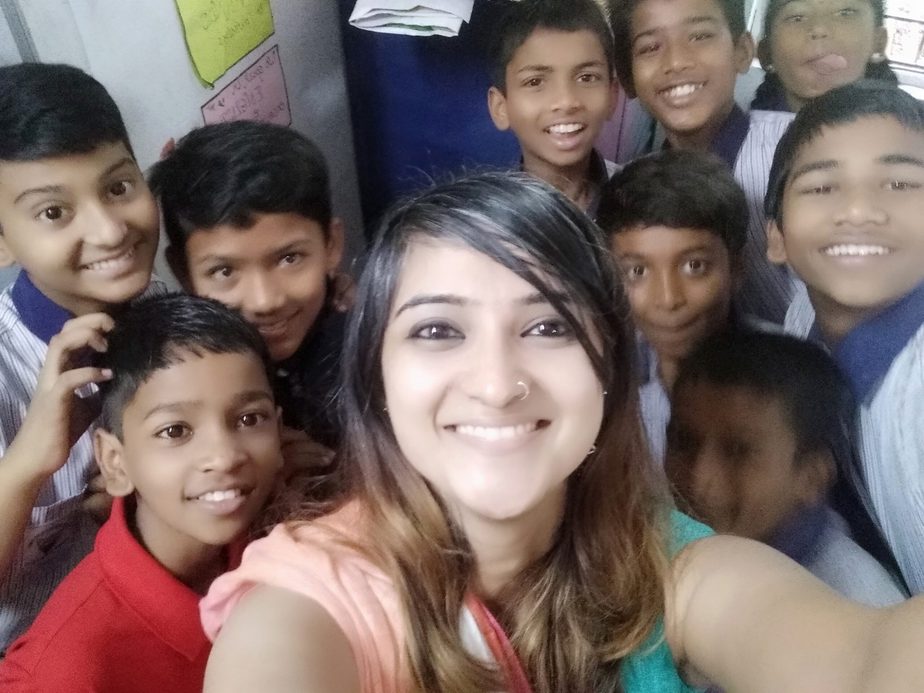 Upasna Sachdeva is an engineer-turned-banker-turned-teacher–and currently, a Teach for India Fellow teaching in Pune.

From Standing Outside Classrooms to Learning Within Them: Inclusive Education for Children with Learning Disabilities in India

What Our Textbooks Aren’t Telling Us About Caste in India