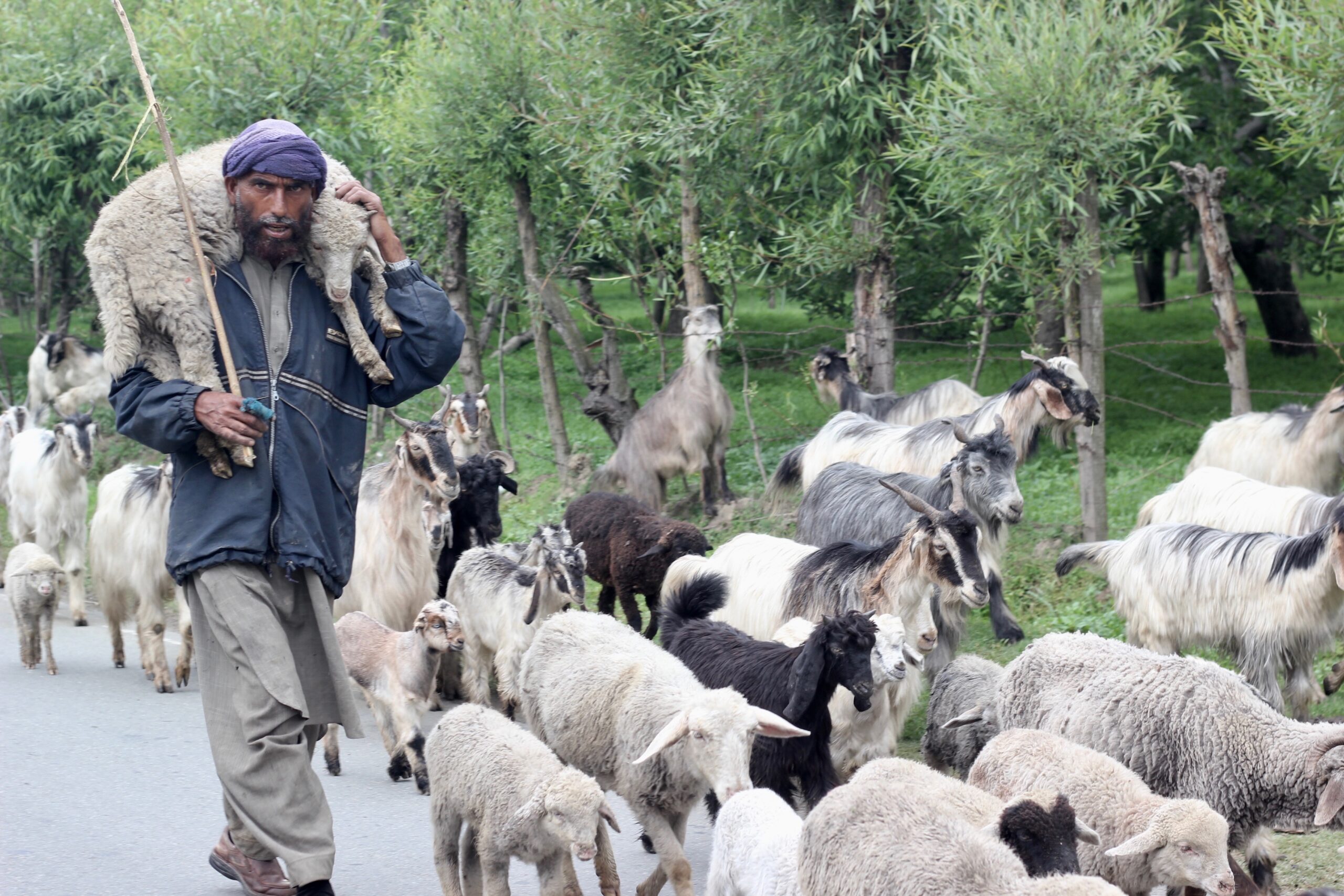 In the throes of Jammu and Kashmir’s winter earlier this month, pastoralists were in for a shock. About 10,000 apple trees were razed by the Jammu and Kashmir (J&K) Forest Department in Kashmir’s Budgam. This affected the lives of the cattle herder Gujjars, now mostly settled on Kashmir’s slopes, and the nomadic Bakarwals who migrate to Jammu’s meadows in winter and to Kashmir’s alpines in summer. For these pastoral communities rearing apple orchards was a major source of income.

This was not an isolated case. Since November, more such videos in different parts of the Union Territory (UT) have surfaced online. The Gujjar and Bakarwal families were served eviction notices asking them to “leave the unauthorised occupation of the forest land.” Around the same time, the UT’s Forest Department also publicly listed over 60,000 such encroachers across Jammu and Kashmir, making it clear that this eviction is unlikely to be the last of its kind.

But there is an irony here that is difficult to miss. While the Forest Department is carrying out evictions of those dependent on the land for generations, it is also—albeit with much less gusto—conducting meetings and online training sessions for the bureaucracy about the Forest Rights Act, 2006 (FRA). This Central act legally recognises and vests the rights of tribal and other forest-dependent communities—which went unrecorded in earlier settlement processes. The rights vested under the FRA range from residing in or cultivating on forest land, and collecting, using, and even selling forest produce. If properly implemented, the FRA can actually prevent evictions, such as those seen in Budgam in early December.

Officials of J&K forest department have axed 100s of apple trees of forest dwellers in Kani Dajan, Budgam. Villagers claim over 10000 trees were cut, five days after being served eviction notices. Many families of neighbouring Sekiloo & KaniDajan villages are dependent on forests pic.twitter.com/sqVMTZ33Ky

In fact, the Forest Rights Act was one of the 106 Central laws extended to the UT under the J&K Reorganisation Act in August last year, when the erstwhile state lost its special status. Along with the FRA, the Indian Forest Act, 1927 was another law extended here; it’s this law that puts control of forests in the hands of the government, thereby making evictions possible.

And so, more than a year later, the FRA’s implementation moves at a snail’s pace in contrast to the evictions, and that too, without the letter and democratic spirit of the Act itself. “Before the communities can take advantage of the FRA, they are being evicted,” says Muzamil Jaleel, Deputy Editor with The Indian Express who has been following developments under the FRA in Kashmir closely. “This is called changing facts on ground.”

Without Letter and Spirit

“FRA makes it clear that tribals and other forest-dwelling communities are integral to conservation, sustainability, and the survival of forests; they are not encroachers,” Jaleel continues. In fact, 12% of the total population in Jammu and Kashmir is recorded as Scheduled Tribes. In addition to this, many other non-tribal forest dwellers are dependent upon forest lands for animal rearing and farming, and also for collecting fodder, firewood, rhododendron, chilgoza pine, and medicinal plants too. Many of them do not own land.

When initially implementing the Act in November 2020, J&K’s administration announced that it was conducting a “survey of claimants [under the Act]…for assessing the nature and extent of rights being claimed at village- level [to] be completed by January 15, 2021.” The same was reiterated in the latest state-level meeting for FRA, where the Chief Secretary “impressed upon the Forest Department to kick start the initial survey of claimants…”

However, this process is riddled with discrepancies. Asking the Forest Department to kickstart the implementation of the FRA, as seen in the case of Jammu and Kashmir, deviates from the letter and spirit of the Act. The FRA clearly states that at the Centre, it is the Ministry of Tribal Affairs (MOTA) that is the nodal agency, or the agency responsible for implementing the Act—not the Ministry of Environment, Forests, and Climate Change (MoEFCC). This stance was taken much earlier while the Act was being drafted, as it was argued that the MoEFCC had been carrying out many brutal evictions of forest dwellers across the country in the past. If an Act to undo this wrong was to see the light of day, the MoEFCC could not be the one drafting it—if it did, it would play an “adversarial role” and hence, could “not be trusted.” The responsibility went to the MoTA instead.

So first off, at the state level then, it is the Tribal Welfare department—not the Forest Department—who should be focusing on implementing FRA.

There is another deviation, though. “Under the FRA, the assessing of rights and the first round of verification is the responsibility of the village-level forest rights committee, not of the administration. All that the government needs to do is to create the sub-divisional and district-level committees, and support the claimants by providing the record of forest rights,” Jaleel argues.

Jaleel is referring to the fact that the Act vests Forest Rights Committees—formed by discussions in the Gram Sabhas—with the power of identifying claimants and filing claims, amongst other responsibilities. From there, the processes laid out in the FRA require the claims to be passed on further to sub-divisional and district-level committees.

So, in all senses, the Act democratises policy implementation by making the village-level meetings the first point of initiation in the process of claiming rights, not the bureaucracy. But the current implementation of the FRA in J&K, wherein the Forest Department can “assess nature and extent of rights” only seems to be coming from the top—without any village-level committees being formed. The recent training sessions on the FRA too have been only for the bureaucracy so far, with none being held for the communities who would stand to benefit from the Act.

Apart from what seem to be structural challenges from the administration’s side, the implementation of FRA also suffers from a marred public opinion formed upon already contentious lines of religious and tribal identity. “In Hindu-majority Jammu, the government has spread rumours that if FRA is implemented, then the forests will be in the hands of Gujjars, the majority of whom are Muslims. While in Kashmir, rumours have created a divide between the landed Kashmiris and tribal Bakarwals,” says Dr. Gulam Rasool, the co-convener of the National Campaign for People’s Right to Information. The end effect of these discourses then is unfortunate—the Act is seen as something to be wary of, not as a legal mechanism to vest communities with rights over natural resources.

Dr. Rasool points towards another narrative undermining the role of FRA in the Union Territory. “When we have spoken to the administration about the Act’s implementation, they have often told us that the rights it envisions to vest have already been settled in earlier land settlement processes. Hence, there is no requirement of the FRA.” However, a peek into historical documents suggests something different.

In 1912, the ruling monarch of Jammu and Kashmir, Maharaja Sahib Bahadur, notified a Kashmir Forest Notice. This Notice was followed post-independence too; it was momentarily withdrawn in 1980, only to be reintroduced soon after at a later date upon public demand. Identifying the exact year when this happened remains elusive in the document available online.

Nevertheless, the notice allowed villagers living within 5 kilometres of demarcated forests in the UT “concessions” to use the forests for grazing, grass cutting, and major forest produce. But these are just that—concessions, and not rights. The ownership of the forest was still in the hands of the government. This is what FRA attempts to change by verifying the “rights of ownership, access to collect, use and dispose of minor forest produce” of the community. These rights differ from the “concessions” since they become legally enforceable; it trumps all other previous notices and laws, as the Act mentions, “notwithstanding anything contained in any other law for the time being in force…”

In light of these differences, it is unfortunate that there is a lack of understanding amongst the administration of what the FRA really seeks out to do.

Taking the Act to the Communities

Dr. Rasool, through the Forest Rights Coalition-J&K campaign, hopes to bring more awareness about the Act to the UT’s communities. This newly formed people’s campaign is working for the implementation of the Act in the Union Territory by building advocacy, awareness, and training modules on the FRA. Communities are engaged with through regular meetings and sessions.

At present, the administration seems to be working towards a top-down implementation of FRA, and evictions of those communities who would benefit from the Act—all in the same breath. “See, the Supreme Court order last year stayed its order on eviction of those communities whose rights were rejected [under the FRA]. Here in Kashmir, the people have not even had the chance to file claims under the Act and are being evicted on land that they have been dependent on for years. Besides, the government is using a law from 1927 for these evictions ” claims Jaleel, pointing towards a strange contradiction that communities in J&K are dealing with.