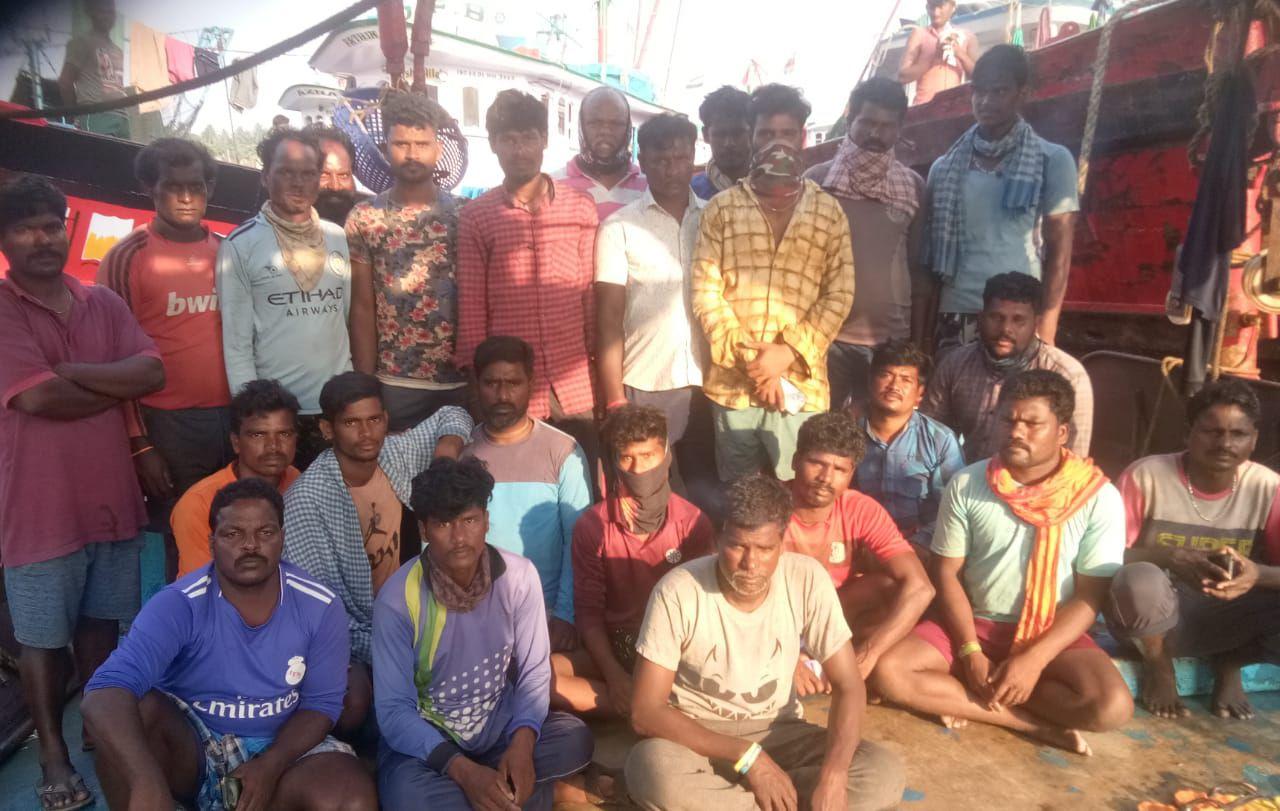 The plight of Inter State Migrant (ISM) workers in India during the ongoing official COVID-19 lockdown, has been highlighted by various media platforms. The number of internal migrants in India is estimated to be 450 million (accounting for both inter-state and intra-state migrants) as per the 2011 census. Most of them are informal workers employed in the unorganised sector or engaged in informal work in the organised sector. With the sudden lockdown, and shutting down of industries and services, they are struggling to pay rent, and buy food and medicines.

Migrant fishworkers have received less attention in comparison to other categories of migrant workers. Due to the decline in fish catch and reduced returns from fishing, traditional fishers have been migrating from their native villages to large harbours, either in their home states or other states, for over a decade. They work as crew in mechanised fleets or engage in allied activities like fish processing, net-mending, or boat repairing. In the immediate aftermath of the lockdown, fishworker trade unions and supporting organisations came across multiple cases of stranded migrant fish workers. The number of currently stranded fishworkers based on the Dakshin Foundation’s interaction with the workers themselves, are as follows.

In most of the cases, migrant fishworkers are still residing in the cramped cabins of their boats and have not been shifted to better accommodations.

Now, the Home Ministry, in its order on 10th April  2020, has declared fishing an essential activity and given permissions to resume fishing. However, prolonged stay on the boats and subsequent exposure to mosquito bites, lack of adequate sleep, and lack of access to proper sanitation or bathing facilities have severely impacted the physical and mental health of the migrant boat crew.

What Waiting Out the Lockdown On a Boat Looks Like

“You are telling us that we have to clean, we have to wash our hands and feet and stay absolutely clean. How can we stay clean? We are not able to do it. There is very little water even to drink. How do I wash my hands and feet?“ asked a stranded Odiya fisherman in a video received by relief workers. Most of the fishworkers that Dakshin’s members spoke to are desperate to go home and are in no physical condition to resume fishing immediately, even if it is now permitted by the government.

Additionally, stranded fishers are also facing severe nutritional deficits. In most places, authorities have placed the onus of providing the migrant workers with water and rations squarely on the boat owners. While some boat owners were able to support the workers to an extent during the first phase of lockdown, the extension of the lockdown has strained their resources too. This has taken its toll on the quality as well as quantity of food provided to the stranded workers.

The situation is further complicated by the fact that fishers are used to preparing their own food on the boat during fishing journeys and find it difficult to adjust to the variability of taste and quality in donated cooked food being offered to them. Fishworker unions and supporting organisations have been receiving complaints about food shortage and poor quality food from stranded workers.

Moreover, with the extension of the lockdown and increased strain on finances, in many places, the boatowners have expressed reluctance to continue extending their support. This has caused a fresh wave of anxiety among the fishers. Leaving workers at the mercy of the boat owners instead of an empathetic state has also created a perception of charity among the fishworkers and boat owners. “We don’t care about food anymore. We are fed up with begging people for it. We just want to go home now,” said a stranded fisherman in a distress call.

You May Also Like: The COVID-19 Crisis Should Make Us Rethink Our Prejudices Against Basic Incomes Transfers

Most ISM workers, including fishworkers, hardly have any emergency funds. With rural households in distress due to the lockdown, ISM workers are simultaneously worried about their families back home and grappling with the insecurities of no money at hand. This has resulted in them not even being able to make essential purchases like medicines. While some state governments like Assam, Jharkhand, Bihar, and Bengal have initiated money transfers to stranded ISM workers via mobile apps, the process is difficult for those without access to smartphones or those without adequate digital literacy. Thus, they have to depend on other people to fill in sensitive data like Aadhaar numbers.

Clearly, the issues faced by India’s fishers are diverse, yet more importantly, worsening their health amidst a public health emergency. As per information obtained from distress calls received by the Dakshin foundation, the main demands from stranded fishworkers–asides from going home–are:

The Toll of the Crisis

These deplorable conditions have taken a huge toll on the workers and their mental health. Recently, the Andhra Pradesh Fish-workers Trade Union reported two deaths among the 4000± fishers stranded in Veraval harbour in Gujarat. The union leaders attribute both deaths to panic attacks due to fear of Coronavirus.

However, it is clear that the deplorable living conditions have played a huge role in exacerbating their anxiety. “22-year old Raju died due to mosquito bites, being stranded here, and mental depression. He died so young that he couldn’t even see his new-born baby girl,” said Polisu, another Andhra fisherman stranded in Gujarat.

The news of deaths in Gujarat has spiked panic among other groups of stranded fishers as well. Fisher trade unions and supporting organisations are receiving increasingly distressed calls from the field. For instance, fishers from Andhra Pradesh, stranded in Karnataka’s Mangalore and Malpe harbours, are concerned about the widespread panic and anxiety among their members.

Yet another death was reported on the 29th of April among the Andhra fishers on board their boats in the village of Uttan Pali, in Mira Bhayandar, Maharashtra. While Kori Jaganathulu (35) passed away due to kidney complications, the COVID-19 related restrictions in the village raise concerns about the fishworkers’ ability to access healthcare and nutrition.

“Yesterday one of our colleagues died due to [a] kidney ailment. Due to the lockdown he couldn’t avail medicines on time. If the lockdown continues like this, there would be more problems. So, we want union leaders, state and central governments to take notice of the situation. We request everyone to send us back to our hometowns by bus or train,“ appealed Chandrashekara, Jaganathulu’s colleague, who hails from Sreekakulam, Andhra Pradesh.

While the unions and supporting organisations are trying their best to offer emotional and psychological support to the stranded workers, it is clear that the only solution is to facilitate their safe return to their homes. After the second death in Veraval on the 22nd of April, the Andhra Pradesh and Gujarat state administrations arranged transportation on 28th April and the fishers have now reached their home state.

To ensure such tragedies do not proliferate, the central and state governments should treat the issue of transport of stranded fishers everywhere as priority. To this end, the Ministry of Railways in its order dated 2nd May 2020, announced ‘Shramik Special’  trains for the movement of migrant workers and other stranded persons. While this is a welcome move, it is not yet clear who will bear the cost of transportation, as subclause (c) of clause 11 of the order, states that ‘The local government authority shall hand over the tickets to the passengers cleared by them and collect the ticket fare and hand over the total amount to railways’. The amount is set at sleeper class fare and an additional ₹ 50. The Indian Railways clarified on 4th May 2020 that ‘sending states ‘ will have to pay the ticket costs. This has not been particularly reassuring for migrant workers as they worry this would dampen the efforts of the host states to arrange transport. There is also the possibility that cash-strapped states would ask the workers to pay for their tickets.

The fish workers that Dakshin volunteers spoke with, were also quite frustrated about the procedural delays.

“We have registered for travel but we don’t think we will be able to travel anytime soon. We might as well walk all the way home,” said Ramu*, a fisherman from Sreekakulam, Andhra Pradesh who is stranded in Malpe, Udupi in a phone call on 4th May 2020. Their frustration and trust deficit in the state is so high that some workers have begun pooling in money to arrange individual transport. The money is mostly arranged by their families back home through borrowing. In the context of lack of earnings during the lockdown and the incoming monsoon ban, these borrowings are likely to send the migrant fisher families into a debt spiral and further impoverisation.

The Ministry of Home Affairs order dated 3rd May 2020 has added to the anxiety and confusion.

While this order may provide reprieve to the boat crew, it is likely to have devastating impacts on the fishworkers who are employed in allied sectors like fish processing. While they can’t be termed as seasonal migrants, their jobs have become erratic or vanished due to the lockdown. As such, they are unable to sustain themselves in the cities and are desperate to return home.

Considering the livelihood crisis of fisher households due to the lockdown, deplorable living conditions of the stranded fishers and their deteriorating mental health, the centre and states should act with haste to ensure that free and safe transport is arranged for the stranded migrant fishers who wish to return home. Those who toil to produce the fish on our plates, and foreign exchange wealth to the nation, must not be forgotten in this crisis.