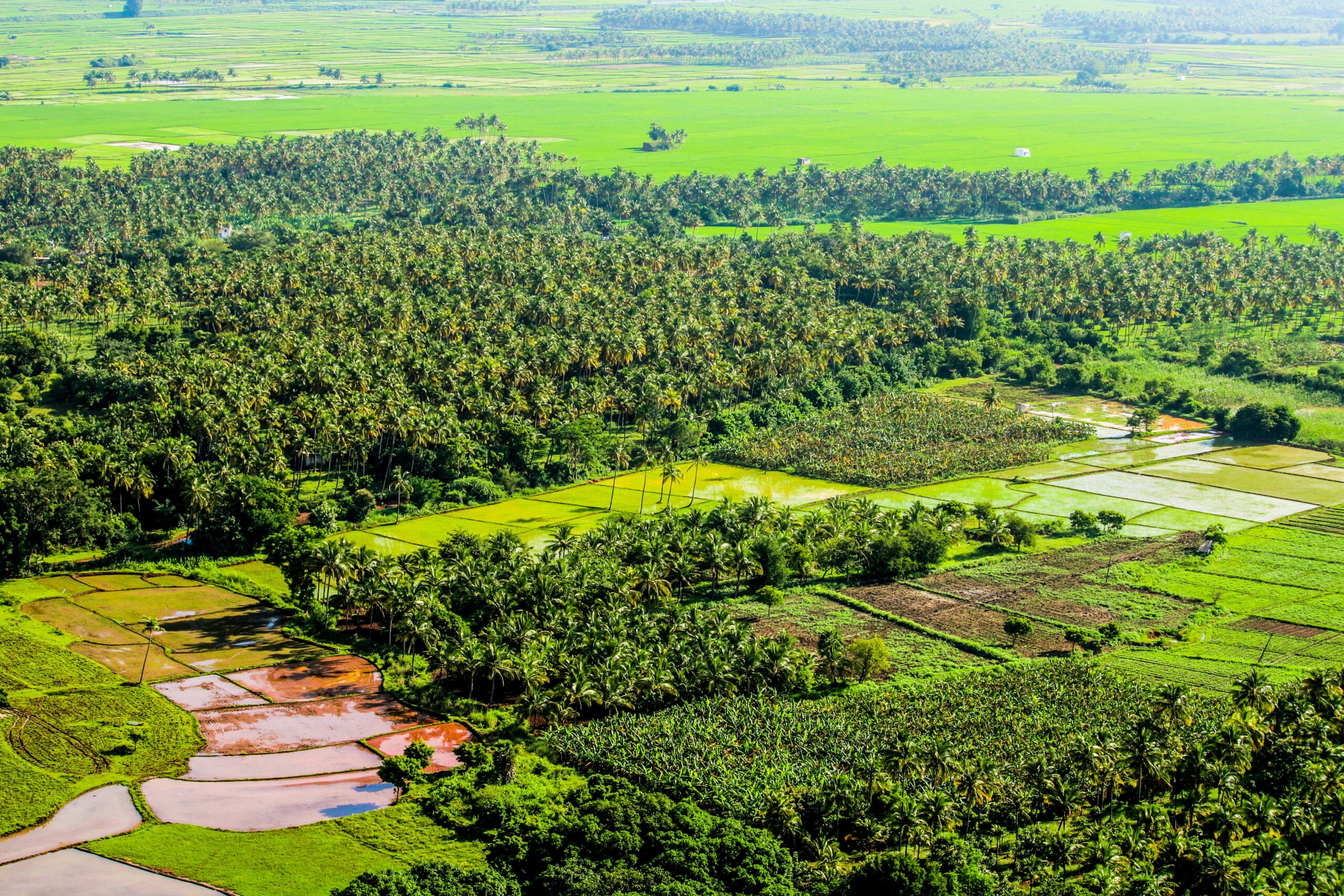 Each one of us is increasingly surrounded by applications that make use of artificial intelligence (AI)—whether that’s predictive typing on phones and laptops or automatic image processing on cameras.

How does this work? AI, in many cases, focuses on replicating human intelligence. This is achieved by breaking down the human thought process into steps and directions that the computing machine can follow. Over time, as the machine is fed with more data and information, it improves its decision making and thinking ability through machine learning. (This is a simplistic explanation of the technology though, and there are several other ways in which artificial intelligence can be trained!)

The apps that we use on our phones are examples of everyday uses of AI, however, the potential of the technology is immense, and could address some of India’s stickiest public policy conundrums. For example, can ‘disruptive’ AI help resolve systemic issues that have plagued Indian agriculture and agriculturists for several decades?

Agriculture has served as the backbone of the Indian economy and a significant proportion of the population for several centuries. Despite this, Indian farmers continue to suffer from the same problems that have plagued them since Independence. One such problem is the dependence of the Indian farmer on rainfed irrigation in the form of a variable monsoon. Another is the lack of relevant education and training with regards to cropping patterns, use of inputs and fertilisers and soil management. Inadequate price discovery mechanisms also hamper the ability of farmers to realise the full value of their produce.

So, where exactly does AI fit into all this?

This is a question that has recently captured the attention of the Government and the Indian start-up ecosystem. NITI Aayog’s National  Strategy for AI highlights agriculture as one of the 6 priority sector areas where AI-driven solutions should be implemented. Further, an inter-ministerial committee on doubling farmers income by 2022 has also appreciated the role that AI and digital technology-driven solutions can play in achieving this objective. Similarly, Indian agritech start-ups have been able to raise upwards of $500 million in venture funding to support the development of their solutions. The solutions being developed by these various stakeholders highlight how technologies—in the presence of robust data laws and literacy—can be leveraged to the benefit of the farmer, operating at the caprice of a rapidly changing climate.

How are Indian companies developing AI for agriculture?

Predictive alerts have been a starting point for multiple entities—such as Microsoft and ICRISAT—who have developed AI-based systems that determine the ideal sowing date given an area’s immediate agro-climatic conditions. These systems analyse years of climatic data to predict weather patterns and suggest a date that can maximise the chance of a successful yield. Farmers who participated in the Microsoft and ICRISAT pilot programme, received text messages indicating the AI determined sowing date, which was a week later than conventional wisdom would dictate. The farmers who delayed the sowing of their crop, in accordance with the advice they received, saw gains of up to 30% in their yields relative to the farmers who had sowed earlier.

Similarly, AI-based predictive alerts have been used to predict pest attacks and advise farmers on how best to cope with them. This has allowed them to avoid substantial losses that occur as a result of seasonal pest attacks. AI and Machine Learning (ML) are also useful when it comes to predicting soil nutrient content and moisture and, hence, its fertility. This is a valuable input for farmers as it can help them in deciding which crop to sustainably and productively grow on their land. Fasal is one of the leading names in AI based predictive solutions for Indian agriculture.

AI is also playing an important role in the identification of diseases and pests that ail a farmer’s crop. Algorithms are trained on annotated photos of plants suffering from various diseases and pests. Over time, the algorithm is able to identify what ailment a plant is suffering from based on a photo taken by a smartphone camera. It can then suggest the application of pesticides and insecticides that are effective in remedying the particular ailment. The Agrio app is an example of how such technology is being used by Indian farmers.

Our #AI system and two #agronomists said this is a potassium deficiency.. ?

Additionally, while Indian agriculture has been and still is labour intensive, there is an increased uptake in mechanized farming across the country. Drones, in particular, have multiple applications that can aid farmers, such as field surveillance, mapping, seeding and spraying of pesticides and fertilizer. Their efficacy can be increased significantly when coupled with AI. For example, drones with mounted cameras can be used to sow the seeds for the farmer in pre-determined patterns with absolute precision. Similarly, a farmer can create a path or map for the drone to follow while spraying pesticides and insecticides in the field.

Finally, the Indian agricultural market system has been fragmented and siloed across different mandis located in varied towns and cities. As a result, both farmers and consumers have been unable to sell and buy commodities at the best available price. Further, the fragmented nature of markets and prices complicates the setting of the minimum support price and other subsidies for policymakers. To overcome this problem, the Agriculture Minister has signalled the Government’s intention to use AI to resolve this problem. Price data from the different mandis, market yards, commodity exchanges, and e-platforms will be collated and analysed using AI. This analysis can be made available to policymakers, farmers and consumers to allow them to make decisions based on complete market information.

Are these solutions to good to be true?

It would appear that AI has the potential to revolutionize Indian agriculture by providing agriculturists with valuable insights, information and tools that can boost their productivity and reduce their losses. However, the potential of the technology alone is insufficient to realise these intended objectives. Successful translation of AI applications from the lab to the field is crucial and will require a concerted effort from all involved entities.

In particular, the following challenges need to be overcome for the successful implementation of AI with respect to Indian agriculture. Training algorithms to predict diseases, prices, and weather patterns requires copious amounts of data. Currently, data pertaining to different facets of agriculture is stored in silos across different Ministries and Departments. Further, the quality of certain datasets is not robust. For instance, there is a paucity of datasets with annotated pictures of diseased plants. Hence, there is a need to collate data across Government departments and improve data collection practices at the ground level—which will require its cooperation too.

More importantly, agriculture in India is deeply rooted in traditional practices and wisdom that functions well anyway—these systems may often be at odds with the advice and recommendations provided by AI-powered applications. We see this in the case of Microsoft and ICRISAT’s system, wherein the sowing date suggested was a month later than what is traditionally considered to be the appropriate date. It is reasonable and likely that farmers may be distrustful of the imposition of technology that interferes with long-held beliefs and practices. This challenge can be overcome by grassroots awareness campaigns that help farmers understand how AI works, the basis for its decisions, and how farmers themselves can use the information provided to them.  The Government can mobilise its vast infrastructure of agricultural universities and Krishi Vigyan Kendras to undertake these campaigns.

#CropIn has successfully completed the 1st phase of #pilot study in #Karnataka to test the effectiveness of modern #technologies in assessing #crop #yield loss, for payment of claims under the Pradhan Mantri Fasal Bima Yojana (#PMFBY). https://t.co/aTBwU28aic#CCE #CropCutting

Lastly, the availability of technology in the absence of the requisite skills to use it properly is meaningless. The complexity of AI-based solutions can act as a deterrent to their uptake by farmers. Therefore, emphasis needs to be laid on providing farmers with relevant information and training programmes that allow them to understand AI-based apps. At the same time, developers and entrepreneurs need to be incentivised to develop easy to use solutions in multiple languages to cater to the diverse backgrounds of Indian farmers.

AI and associated technologies present an opportunity for India to truly bring its agricultural practices into the 21st century—one that is plagued by extreme weather conditions and unpredictable markets. To harness this opportunity, the adoption of a whole of Government collaborative approach is essential. The Telangana Government’s Ai4Ai programme, that involves the WEF and NITI Aayog, is one example of what such an approach may look like.