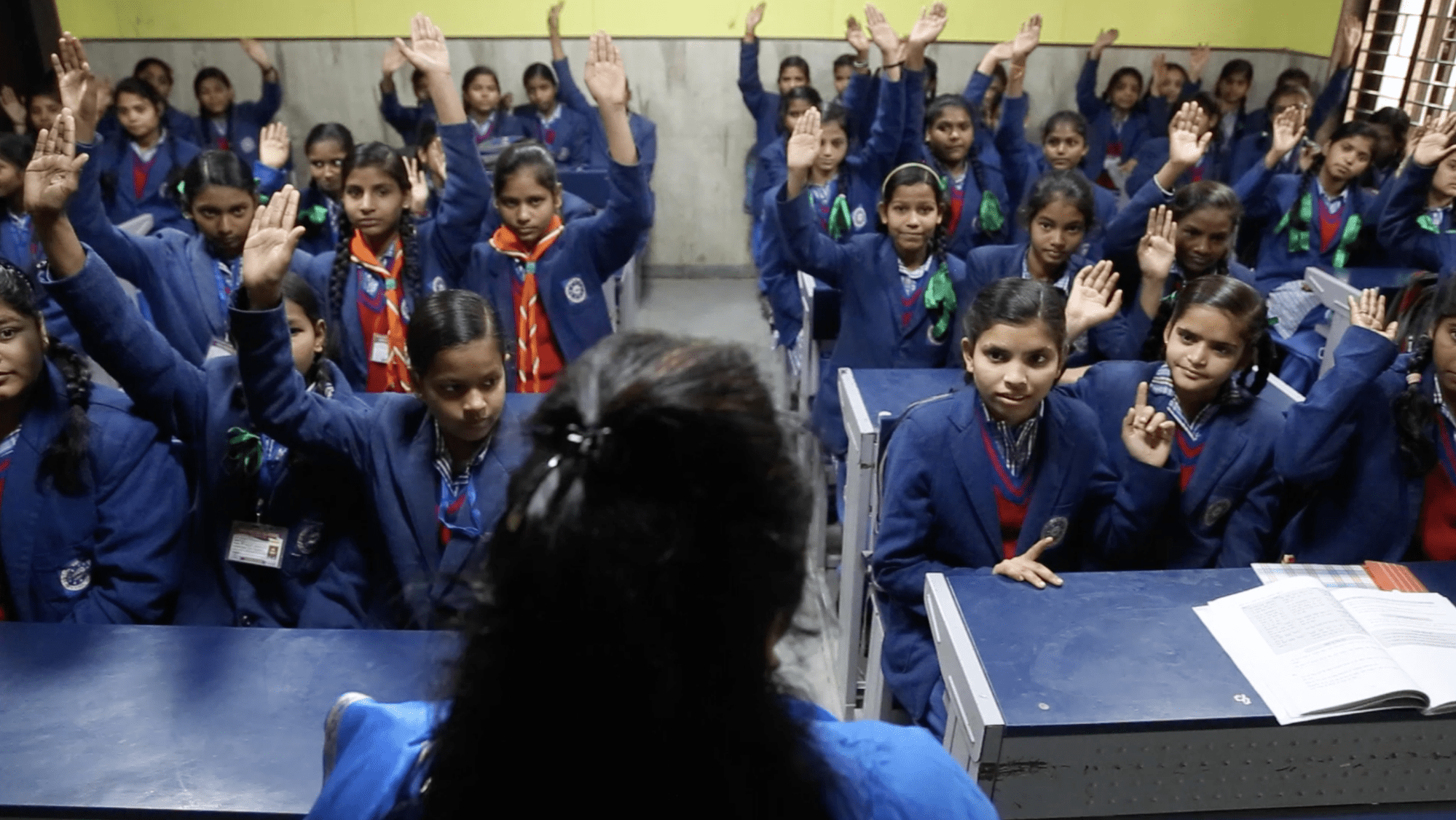 India is the world’s fifth-largest economy with hopes to become the fastest-growing major economy globally by piggybacking on its biggest structural advantage: a large young population. India’s working-age population is touted to grow by roughly 9.7 million per annum between 2021-31.

To make the most of this demographic sweet spot, investing in quality education for the future of our children—and economy—is critical. Yet, the country’s expenditure on education (as a % of GDP) in 2019-20 was only 3.1%. In contrast, in 2016, member states of the Organisation for Economic Co-operation and Development spent around 5% of their GDPs on average on educational institutions, from primary to tertiary levels.

So, to prepare for a successful future in line with the ambitions of the National Education Policy 2020 (NEP 2020), India’s federal system needs to sustainably upgrade its education system at scale. However, there is one Indian state that has already set in motion a remarkable education reform journey. Its investment in education between 2015-20 is 27% annually, the highest among all states. In pre-COVID times, the state’s Minister of Education started each day by visiting a government school to see the ground reality himself.

While this may seem improbable, first-hand interactions with Manish Sisodia, Deputy Chief Minister and Minister of Education of the Delhi Government, highlight a level of determined commitment towards reform, resulting in one of the most remarkable education transformations in India in recent times. The pass percentage of the 2016 batch of grade 12 CBSE students under the Aam Aadmi Party (AAP) government was 85.9%. In 2017, it improved to 88.2%; it then leaped from 90.6% in 2018, to 94.24% in 2019, to 97.8% in July, 2020. Government school results were now 5.9 percentage points higher than private schools’ in Delhi!

Where did the state government channel this investment and how did it usher in such massive change in Delhi’s fractured education system? The answers lie in the model’s four pillars.

In Shiksha: My Experiments as an Education Minister, Sisodia, recounts his initial dismay during his first few visits to government schools. A sea of crippled school infrastructure met the eye, replete with dilapidated classrooms, unusable toilets, playgrounds filled with garbage, and overfilled classrooms. This has a direct impact on student motivation and engagement, as the “Quality of learning spaces is intricately linked to the self-respect that students feel coming into their school,” Sisodia tells us.

This is what the Delhi Model initially sought to change. “We managed to change that state of infrastructure across all our 1,024 government schools.” Transforming infrastructure across these schools was undertaken on a war-footing. To account for overflowing classrooms in 2019, 25 new schools were built; 8,000 new classrooms were constructed on course to meet the intended target of 30,000.

To improve the campuses themselves, 54 model schools were identified to be upgraded with better infrastructure, such as SMART classrooms, sports facilities, and science laboratories with modern facilities—100 more are to be developed by 2030. Since 2018, the government also provides at least 5 lakhs to each government school annually, which they utilize based on the needs of the school, be they infrastructural or academic.

Across most public schools in India, the work of Principals—the effective Heads of Schools—has often been reduced to administrative and bureaucratic tasks. Through multiple conversations with principals from 2015 onwards, the Delhi Government built insights on what held Principals back from developing a strong learning vision for their schools.

The government soon realised the lack of an enabling environment was a major factor. And so, Principals from Delhi’s government schools were first sent on leadership development programmes offered by the Indian Institute of Management, Ahmedabad. Teachers were also sent abroad for training sessions in Cambridge. This exposed them to some of the best higher education institutions both nationally and globally, as well as some pioneering learning and teaching methods for their students back home.

You May Also Like: Who Teaches the Teachers? Developing teacher mentors for quality education

Based on their feedback, the government also took steps to reduce administrative burdens. For the first time, Principals had the freedom to allocate budgets to improve both school and learning outcomes. Schools could now also budget for a separate Estate Manager to take care of infrastructural issues, reducing the logistical burdens placed on Principals themselves. Principals were trusted to take decisions in the best interest of their schools, and encouraged to develop a 5 to 10-year vision for their school and students. All bureaucratic hurdles like long drawn permissions required from the Directorate, long periods for filing approvals, and processing issues among others were also removed.

On her experience of the reforms, Dr. Niranjan Shahi the Head of School at the Government Boys Senior Secondary School, Mundka, says, “I got an opportunity to introspect and visualise my role from various dimensions. These innovations have turned me into a more positive, sensitive, and empathetic leader of the school community that helped my school to excel not only in academics but all the spheres.”

Recognising the critical role that teachers play in shaping values, beliefs, and world views of learners the government also created spaces for teachers, by investing in welcoming, and enriching staff rooms to rest in. Thoughtful investments such as issuing a tablet for every teacher to ease reporting and administrative duties, and reducing non-teaching assignments such as taking government surveys and censuses also streamlined responsibilities back to teaching.

The Mentor Teacher (MT) Program conceptualized in 2016, further reformed the structure of ineffective in-service teacher training by institutionalising on-site support for teachers. 200 teachers from the Directorate of Education were selected in the first batch of MTs, and over two years leveraged their creative expertise by providing on-site learning support to other teachers, and also organising workshops to strengthen their academic and pedagogic capacities. Ensuring personal and professional growth went a long way in re-inspiring teachers back into elevating the profession.

Mentor Teachers have also played a pivotal role in the design, implementation, and evaluation of new initiatives in Delhi’s education model, including Mission Buniyaad, the Happiness Curriculum, and the Entrepreneurship Mindset Curriculum.

Pillar 3: Parents as Partners in a Learner’s Journey

Most of Delhi’s government schools students are first-generation school-goers. Due to socio-cultural constraints, many parents had never been inside their child’s school, creating a huge disconnect between the teachers and parents, stifling student progress in the process. Two initiatives attempted to change this: Re-activating School Management Committees (SMCs), and hosting regular Parent-Teacher Meetings (PTMs).

SMCs are mandatory for every school as per the Right to Education Act (2009). Each SMC must comprise 16 members, including the Principal, a representative of the local MLA, a teacher, a social worker, and 12 guardians of the students. The SMC supports the Principal with key decisions and shares the issues, challenges, and highlights of running the school directly with the government.

However, most schools in Delhi either had SMCs only on paper, or included members known to them. To address this, the government held elections to build active and participatory SMCs in each school. This has helped decentralise education management and provided agency to parents and schools to actively support their children.

You May Also Like: The Parent Trap: The Troubles of Teaching Children at Home During a Pandemic

To further create and build trust between parents and teachers, PTMs were introduced and hosted across all government schools every 3-4 months on the same day. To encourage parents to attend the PTMs, employers across the state were encouraged to give them half a day’s leave. They were also publicised with adverts in newspapers, radios, and WhatsApp circulars. By creating this space for engagement, parents now had the opportunity to meet teachers and learn of their children’s progress in academics and behaviour on an equal footing.

Pillar 4: Reimagining the Learning Journey of Each Child

While addressing some of the systemic and structural issues plaguing education in Delhi, the government also needed to tackle learning gaps in children concurrently and with equal rigour.

A host of learning initiatives were launched to address these learning gaps to bring students up to grade-level learning. Chunauti 2018 is one of them, which aimed at bridging the gaps of foundational learning for Grades 6 and 8, such that students are able to read, write, and perform basic maths to attain learning outcomes appropriate to their grade level.  According to Mallica Joshi writing in The Indian Express, Chunauti has had a substantial impact on learning indicators. The number of students in grades 6-9 able to read at the appropriate grade level increased from 48% in 2018, to 63% the next year. Similarly, numeracy skills at the grade level rose from 56% in 2018, to 73% by 2019.

Another notable example is the well-known Happiness Curriculum; introduced in July 2018, this is delivered through a daily session for all students from Kindergarten up to Grade 8. Through engaging mindfulness practices, the curriculum enables the development of skills like empathy, critical thinking, problem-solving, communication, and collaboration among students. Neelam Dogra, a teacher from the Government Girls Senior Secondary School, JJ Nangloi, says, “After the mindfulness sessions, students have become more focused, disciplined, and calm. As the ability to concentrate increases, students become more creative and imaginative with how they approach their work.”

To recognise and celebrate the excellent outcomes produced by high-achieving schools under these initiatives, the Delhi Government introduced the “Schools of Excellence” program in 2018. The government’s stated goal is to transform all schools in Delhi into Schools of Excellence, which will only foster the all-round development of the students in the long run.

The Impact of Delhi’s Education Reforms

With other state governments looking to replicate the widely recognised educational initiatives of the Delhi Government, the first step is understanding that merely replicating piece-meal initiatives will only act as a Band-Aid on an already broken system. As we seek to bring the NEP 2020 to life, it is important to recognise that Delhi’s success is guided by certain core policy principles: decentralizing education management, restoring the agency of school leaders, collaborating across departments and stakeholders, and taking quick decisions only after listening to what stakeholders actually need.

Above all, political will remains the key first ingredient. The AAP government brought education and health to the forefront of its politics, encouraging that leaders be elected based on their outcomes in these sectors. Increasing budgetary allocations to Education, the Minister of Education visiting schools every day, and the high levels of transparency, freedom, and accountability in the reforms process, are the demonstrable actions of an actual political will to transform the inequities and barriers plaguing education in India today.