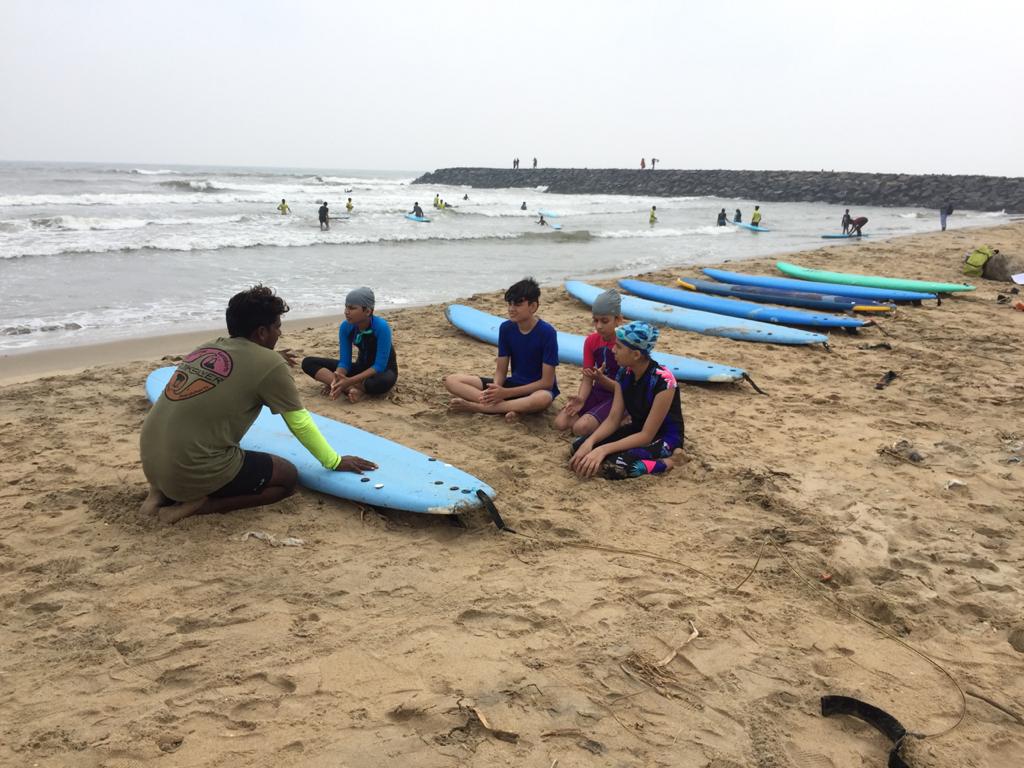 This is the second article of a three-part series on how surf schools on India’s coasts are pivoting around sports education to bolster conservation efforts and community education as well. To read the first part, click here.

“If you want to learn something you’ll remember for a lifetime, you have to learn it when you’re young. I was born in Kovalam and I am from the local fisherman community here. When my dad went to school, he didn’t formally learn about the environment. Neither has anyone else from my community. So, through this surf school and sport, we have the opportunity to shape the mindsets of young people here to be more environmentally conscious,” says Vicky Vijaykumar, who along with fellow Kovalam-resident Appu, co-founded Ocean Delight, a surf school in Kovalam in 2015.

Located just 350 metres away from Bay Of Life, Ocean Delight is another prominent surf school in Kovalam, offering individual and groups courses in surfing, as well as scuba diving.

Aside from these paid classes over the years, part of the larger surfing school boom in Kovalam, Ocean Delight has made significant strides towards educating local children from Kovalam’s fishing communities in sports, surfing, and conservation for free. This is living proof of how surfing and ocean-sports are transforming the prospects of this small fishing village, located only 40 kilometres away from Chennai.

From Surfers to Surf Instructors

Vicky and Appu, both keen sportsmen themselves, began surfing in school, back when the sport was slowly growing in the region in the late 2000s. Looking for a new sport to play, they became skilled in surfing, and later attended the India Surf Festival held on Odisha’s Ramchandi beach in 2012. Vicky won the first prize at the event, Appu came second. “Prizes went to boys from Kovalam village,” says Vicky. “Yet, back home, people couldn’t believe that we’d won anything at all! They didn’t know where the competition had been held, or even that a competition for surfing had existed! Surfing was still very new back then, and when we’d carry our boards to the beach, people from our community looked at us in wonder, because they’d never seen anything like this sport before. That’s when we thought we should eventually open a school.”

This isn’t to say that the concept of surfing in different formats is alien to Kovalam’s shores. “My father was a fisherman, and so was my grandfather,” Vicky says. “They actually used to surf too, using a small fishing boat, called a catamaran [the anglicised term for the Tamil kattumaram]. So, they weren’t surfing standing up, they were body surfing instead. My father and I used to surf the waves like this when I was a child.”

Nowadays, while teaching tourists and Chennai’s residents forms a core part of Ocean Delight’s business, one of Vicky’s top priorities is that “people from the community here should come here to learn how to surf because they can earn money from it in the future.”

This is one of Vicky’s goals partly because since 2004, when the Boxing Day Tsunami destroyed India’s Southeast and Southwest coasts, fishing has been on the decline in Kovalam. As the tsunami’s waters flooded Kovalam, many shrimp farms were destroyed. Vicky specifically references how the giant waves affected local coral ecosystems, which thrive in warm, shallow waters, just like Kovalam’s. These corals are homes for fish, who use them as shelter.

“Before the tsunami, the corals were alive,” says Vicky. “When my father and I used to go fishing, we’d just travel 5-6 kilometres out to sea, cast a net from the boat, and catch the fish. After the tsunami, sand deposited on the corals and filled them up. Fish could no longer enter them, so they stopped coming to the shallow waters, they entered the deep sea instead. Now, we have to travel 25-30 kilometres to catch fish. If we don’t catch much, then we lose out heavily because we spend so much more on fuel.”

There are very few studies on the destruction of reefs in Chennai or Kovalam post the tsunami, that corroborate the experiences narrated by Vicky. However, these experiences parallel similar findings on sedimentation along the southern coast of Tamil Nadu, in districts like Nagapattinam, and in marine ecosystems like the Palk Bay and Gulf of Mannar near Sri Lanka. The trends of declining income for Chennai’s fishers, however, seem to be a pre-tsunami reality, largely caused by the commercialization of fishing, the interference of middlemen, and a lack of fisher-friendly government policies. In an interview with the Population Reference Bureau in 2005, Ravi, a Chennai-based fisherman who survived the 2004 tsunami, stated that fishing incomes in the city had been on the decline since the late 1990s. Ravi used to earn ₹8,000-10,000 a week; by 2004, just under ten years later, his income had dropped to ₹1,000 per week.

You May Also Like: PM-MSY’s Fisheries Development Promises Anything But Sabka Vikas

Given the dwindling returns when it comes to fishing, Vicky wants local children to learn surfing, so that they may also teach it in the future if they wish to–this will provide them with a sustainable alternative source of income. To this end, Vicky engages with many children from the village at Ocean Delight. “On some days we teach 10 children, on others 40,” says Vicky.

The team teaches these children separately when they’re not taking paid sessions. While there are many surf schools here, Vicky believes that children may not feel comfortable attending them–even if they are, the fact that they are expensive makes them inaccessible. “Children from my community have no money to buy or rent surfboards,” says Vicky. “So, we’ve collected some money, and with the help of our friends in the surfing community, we now have boards to teach them with. We give them the boards for free, but in exchange, they have to come help me at the school whenever they have the time.”

However, while it is easier to get boys and men to participate in surfing in these informal sessions, getting girl children into the ocean can be difficult. “Many girl students come from Chennai and attend our classes. However, here in Kovalam, parents are uncomfortable sending their girls to train with men. Girls themselves feel shy. Many are also concerned that they will get tanned if they surf, and will ‘lose’ their skin colour. So initially when we started, there were no girls from the village training with us.”

However, one-by-one the Ocean Delight team began training a handful of girl children in swimming and surfing. This had a domino effect. “Parents weren’t comfortable sending a single girl child to train with 10 men. But, once they saw more girl children participating, many more started sending their girls to train with us. Now, around 15 girl children come and swim and surf with us. Change within communities takes time, we just need to push harder to keep up the momentum.”

This is the same spirit that embodies Vicky and Appu’s work towards environmental conservation at Ocean Delight and within Kovalam itself. Chennai’s waters are increasingly polluted, and the city’s rapid urban expansion is only making matters worse. As the community of students from here in Kovalam grows, the duo seeks to also educate them more about the need to protect and save the oceans, in a manner that makes sense to their livelihoods as small-scale fishers. “Many folks from other cities come here and tell us to stop fishing as it’s ‘bad’ for the ocean,” Vicky says. “But, of course we want to catch fish, because we want to make money, we want to eat! We do not belong to anybody, we belong to ourselves.”

However, Vicky adds that at the same time, “Once we started the school and were in the ocean more, we realised how important the environmental question was. People in our village didn’t take care of the beaches, they would litter casually, I was also once guilty of doing this. But now, I have traveled across the country, and to places like Thailand, Bali, and Sri Lanka. I’ve seen how beautifully beaches can be maintained, how they can be kept clean and plastic-free, and how beneficial that can be for the ocean.”

And so, along with its free surf lessons, Ocean Delight also encourages its students from Kovalam to engage in beach clean-ups for 1-1.5 hours every week. The team also screens videos to the locals on the danger of oceanic plastic pollution, how it kills turtles and fishes, and thus directly impacts their livelihoods as fishers. Vicky says more people attend with every session.

This is a key part of environmental education for Vicky, one that is missing from schools curricula at large. “We are directly engaging with a new generation of children from our community here,” he says. “if we are able to teach them about the environment through action, they’ll become more conscious about their repercussions of littering or polluting water bodies in the future too.”