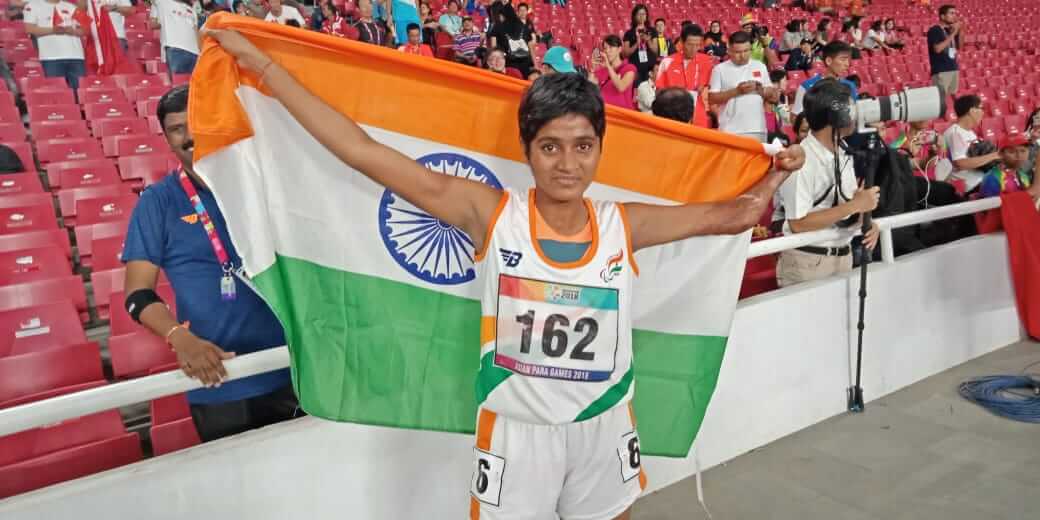 If there were any reason for people to visit Sakhigopal, a quaint town on the coast of Odisha, it would probably be to pay a visit to the Puri Jagannath Temple or for the town’s coconut plantations. Kunja Behera is a daily-wage labourer in Sakhigopal who toils away to support his large family that includes his wife, three daughters, and a son. As if livelihood struggles weren’t enough to deal with, many years ago, Kunja faced further misery when his one-year-old daughter Jayanti accidentally fell into a brick kiln. She suffered second-degree burns, leaving her left side partially disabled, including her hand. The accident was so severe that the fingers on her left hand had to be amputated, her left wrist remains permanently crooked and she lost sensory nerves in the area, meaning she cannot straighten it.

Today, Jayanti Behera goes by “Sakhigopal Express”, a nickname bestowed upon her after her incredible performance in the National Para Championships back in 2016. As the athletics world remains locked down due to the COVID-19 crisis, one of India’s finest para-athletes is grinding it out at a make-shift athletic track in her home town.

The severity of the socio-economic disruption due to COVID-19 has profoundly impacted the Behera family, who are primarily dependent on daily-wage labour. Given the unprecedented nature of the crisis, Jayanti finds it hard to believe that she is currently the sole bread-winner for her family, especially after they were initially apprehensive about athletics aggravating her injury.

The Girl Just Loves to Run

Despite her family’s support, the fear of discrimination for being a girl child with a “disability” in rural India concerned Jayanti deeply. Despite the injury, running was one activity that made Jayanti feel no different from her friends, so she continued to enjoy it during her primary and middle-school days.

Running gives me a sense of freedom and joy. It has given me a platform to showcase my talent, compete with other able-bodied and para-athletes, and makes me feel on par with my peers. I enjoy being a competitive athlete, setting goals and training hard to achieve them.

As Jayanti’s interest in running developed, she began observing other children training after study sessions in her school’s playground. Later that year, in a block-level sports competition, Jayanti participated with other able-bodied children and ended up finishing the race in the first position. More than the medal, what gave the most joy to Jayanti was the fact that Coach Bishnu Prasad took notice of her abilities and asked her to join his training camp.

The State of Para-Athletics in India

Bishnu Prasad, renowned in Odisha for having a sharp eye for talent, noticed Jayanti’s extra zeal and commitment when she was being coached. Not once did she feel differently-abled; training made her happier and more respectful towards her Coach. Going by the rapid progress of his ward, Bishnu Prasad convinced Jayanti’s parents to shift her to Gurukul Athletic Training Centre, which was more conducive to professional training.

During her formative years, Jayanti had to compete with able-bodied athletes, a lacuna in the system that is yet to be addressed at the grassroots level.

Owing to a lack of awareness and encouragement for differently-abled children, the number of para-athletes participating in a sporting event is minimal. So, no competitions are held at the district or state level. An open national event becomes the only ray of hope for a differently-abled athlete.

The Paralympic Committee of India (PCI) allows athletes to select from 20 available categories based on their impairments. As per the norms, Jayanti found the T-47 category (upper limb affected by limb deficiency, impaired muscle power, or impaired passive range of movement) applicable. Shorter distances needed a quicker start off the blocks, which puts severe pressure on Jayanthi’s upper body. Consequently, she preferred distance-running events like 800m, 1500m, and 3000m. Eventually, she took up the 400m event because the other distance categories were not available in the T-47 classification.

In 2016, Coach Bishnu Prasad decided to test his ward’s talent at the National Para Athletics Championship 2016 at Panchkula. Jayanti won the gold medal at the event and a coveted sports scholarship by the GoSports Foundation, a non-profit based out of Bangalore. It was part of their Para Champions Programme, which intends to “add structure to the Indian Paralympic movement”, with a vision to change the general perceptions towards diﬀerently-abled individuals. With GoSports’ professional team managing Jayanti’s sports career, she received support with travel expenses, training equipment, nutrition, and injury management.

Her Gold in the 400m and Bronze in the 200m events at the 2018 Asian Para Games in Jakarta is a testament to the support system that Jayanti has been fortunate to rely on.

Our goal [through the Para Champions programme] is to create a platform that allows Jayanti to be a role model for her community. And, this, in turn, will inspire other aspiring athletes to follow her path and pursue their dreams. At the 2016 Rio games, India had more medals in the Paralympics than the Olympics. The trend is likely to continue in the upcoming editions if the needs of the para-athletes are taken care of.

As Jayanti prepares for the 2021 Tokyo edition amidst a slowly easing national lockdown, she continues to support her family with the allowance she receives from government sports schemes. Jayanti sometimes wonders how the little girl who suffered that horrific injury at such a young age, with no clarity on what life had to offer, turned out to be the role model for her community in Sakhigopal and para-athletes across India!

About GoSports: GoSports Foundation is a national award-winning non-proﬁt organization, established in 2008 working towards the development of some of India’s most talented emerging and elite athletes, competing in Olympic and Paralympic disciplines. Anyone can contribute towards the journeys of many athletes like Jayanti by visiting https://www.gosportsfoundation.in/get-involved