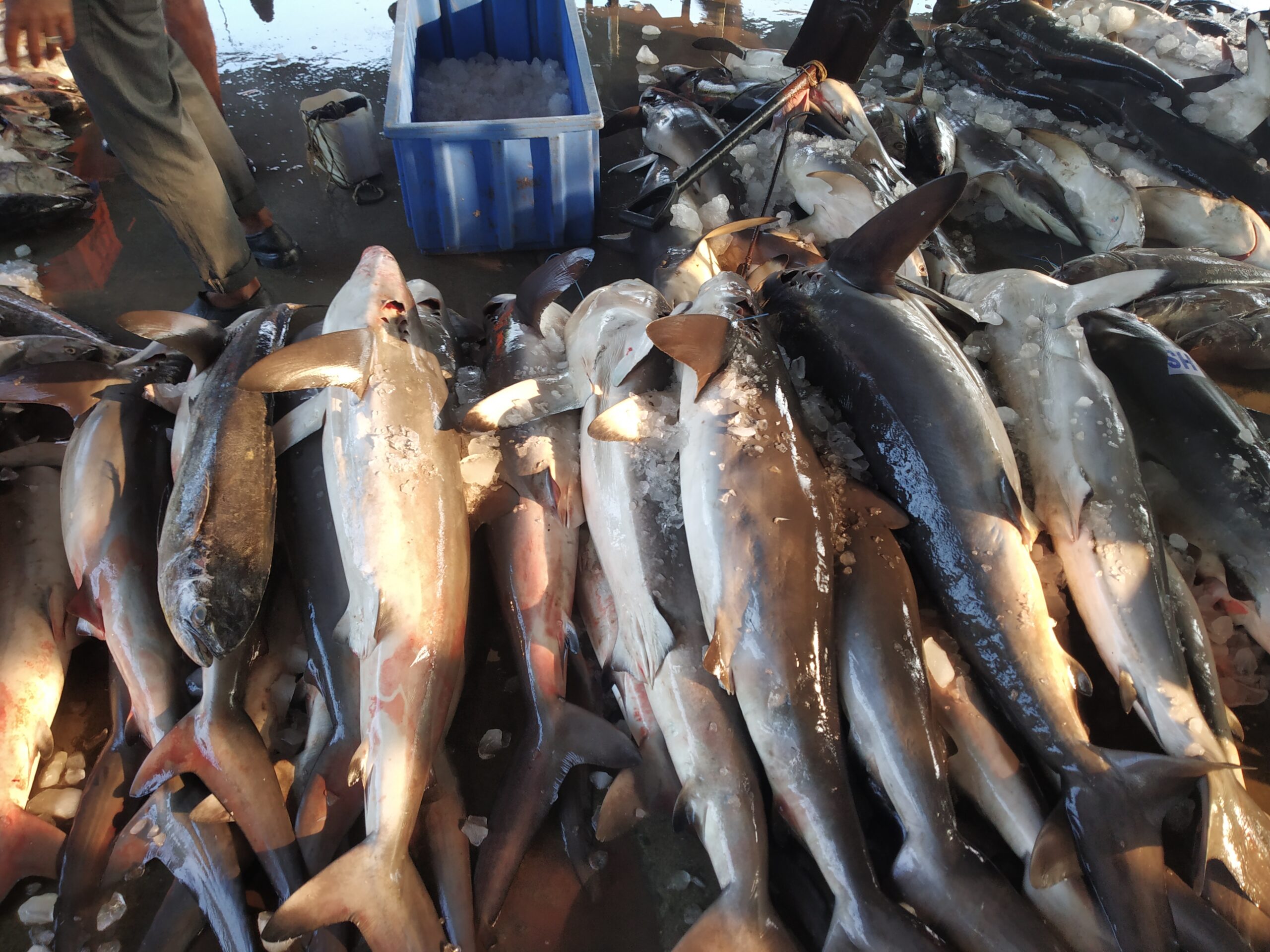 The world’s oceans and seas are home to about 5,00,000–10 million marine species, with up to 2000 new species described every year. However, many of these species are under threat, thanks to unsustainable development models.

Overfishing is currently one of the major threats to marine species, with 33% of the world’s fisheries overexploited or overfished. Climate change, habitat destruction, and marine pollution are other threats that magnify the problem of depleting ocean resources.

For example, as greenhouse gas emissions increase, there is an increase in the amount of carbon dioxide and heat absorbed by oceans, leading to ocean acidification and warming. When ocean acidification increases, the levels of carbonic acid in the water increases, while the amount of carbonate decreases. Carbonate is important for the development of shells in crabs, oysters, urchins, and marine plankton—all of which are important prey species. The development of coral skeletons is also affected as they dissolve in highly acidic environments resulting in the loss of an entire ecosystem. Given that coral reefs protect coastlines during storms and humans depend on them for food and income, this is a worrying state of affairs. Things are only getting worse: post the Industrial Revolution in the 19th century, ocean acidification increased by 30%, while since the 1970s, oceans have absorbed a whopping 93% of excess planetary heat.

In combination with sewage pollution and reducing oxygen levels due to nutrient run-off from agriculture, these phenomena have severely impacted marine ecosystems. They have altered oceanic circulatory patterns and chemistry, leading to changes in the abundance and diversity of species, and a loss of breeding grounds. This threatens the economic and food security of communities dependent on them. Currently, about 5,600 threatened species require immediate conservation attention.

However, for successful implementation on the ground, conservation efforts to protect these marine species require detailed scientific research on the factors impacting their survival. Conservation efforts aimed at protecting the genetic diversity of populations within a single species, is also required for species to thrive as a whole.

The focus of current conservation efforts

Marine Protected Areas (MPAs) are established to protect marine species and to ensure the sustainable utilisation of resources by restricting certain human activities. Their main focus is to “protect ecosystems, areas of cultural importance and to promote sustainable fishing practices.”

MPAs have been beneficial to reviving populations, ecosystems and to ensure sustainable fishing practices in many regions. The Galapágos Marine Reserve in the Pacific ocean has been able to protect diverse marine species by ensuring the sustainable utilisation of marine resources by local communities and by enforcing strict fishing restrictions. The establishment of several MPAs by the United States and Canada in Georges Bank in 1994, led to an increase in fish populations thanks to strict restrictions. The region was previously heavily fished for centuries leading to a steep decline in cod, haddock, herring, and other fishes.

MPAs are quite varied with regard to the kind of activities that are permitted—they need not always be restrictive. In certain regions, only indigenous communities are allowed to utilise their resources, while the operation of commercial fisheries is allowed in others. In certain regions, mining and extraction are also permitted within these zones, like in the waters of northwest Australia.

The no-take MPAs that completely ban fishing activities, are not as effective. In such cases, the fishing pressure is shifted to another area outside the MPA, which does not solve the problem of overfishing itself. Another issue with MPAs is the lack of clarity with regard to their objectives—given that most of them remain ‘paper parks’, and do very little to protect the species. As of today, 6.4% of global oceans are protected under MPAs, of which 3.2% of these areas are less protected or protected to an unknown extent. Out of that 6.4%, less than 1% of MPAs remain unimplemented. This is clearly missing the target of protecting 10% of our oceans by 2020, set by the United Nations Convention on Biological Diversity.

Additionally, the migratory patterns of ocean species defy the bounds (and goodwill) of MPAs themselves. For example, this conservation method has been effective in protecting ecosystems like the Great Barrier Reef (GBR) in Australia. But, many marine migratory species like whales, sharks, sea turtles, and tuna found in the GBR (and world over) require protection at several locations based on their breeding and migratory behaviour. Therefore, a more holistic conservation measure would be to establish a number of smaller effectively implemented MPAs to take into account these migratory and aggregation patterns.

However, in the absence of such measures, the future of these species looks bleak. The various pressures they face during their extensive migrations have now rendered them as some of the most threatened animals in the world.

This is a cause for concern as these migratory animals—that are widespread in their distribution across oceans—are often composed of genetically distinct populations, which contribute to the genetic diversity within a species. This diversity is important for its very survival.

Genetic diversity refers to the genetic differences between the individuals of a species. In Nature, every individual has a unique genetic make-up—this difference is one of the driving forces of evolution, enabling the survival of the fittest. Variations within the DNA of an individual play a crucial role in ensuring the species ability to adapt. These variations are heritable and can aid in the survival of species especially in the wake of climate change.

So, the higher the genetic diversity of a species, the more possibilities for it to adapt and survive in the long term.

However, when the number of genetically different populations reduce, individuals are forced to mate with genetically similar individuals which results in inbreeding, as is seen in the case of pink pigeons, sea otters, and killer whales. This results in future generations lacking variability in their genetic makeup, which affects the fitness of future populations of the species. This plays out in the form of increased susceptibility to diseases and the inability to adapt to changing environments. Such factors can eventually lead to species extinction, as the adaptive capabilities (or lack of) of all the individuals within the population are similar.

Asiatic lions, found in Gujarat’s Gir Forest, Gujarat, are another example of a threatened species facing the risk of extinction, due to severe inbreeding.

How do genetically distinct groups appear and what can it teach us about their conservation?

Even though the oceans seem like a single large habitat, populations of marine organisms are not necessarily connected across space due to specific oceanic barriers. This became evident in various studies conducted to understand ocean connectivity within marine species. Green turtles, hawksbill turtles, and several fishes inhabiting open oceans like hammerhead sharks and blue marlin, have genetically distinct populations in the Atlantic and Indo-Pacific regions.

But, why and how do these differences appear?

This segregation can be attributed to the presence of the Benguela current at the tip of South Africa, which hinders the movement of the above species from the Indian Ocean to the Atlantic, and vice versa. However, certain species like tuna, are able to cross this barrier enabling gene flow between the two regions.

Given that many marine species are migratory, including sharks and rays, the appearance of genetically different isolated populations is largely attributed to geographic barriers.

Barriers include land masses and oceanic currents which hinder the movement of individuals from one place to another. The ability to migrate and the species’ behavioural traits also have an effect—species capable of migrating longer distances have fewer isolated populations. Historical processes like the formation of the Isthmus of Panama—a narrow stretch of land between North and South America—and the closure of Tethys Sea are responsible for the current geographic distributions of populations of marine species.

Complex currents off the South African coast and Southeast Asian seas are also examples of current geographic barriers that play a role in preventing the movement of individuals between and within vast ocean basins. These factors, therefore, limit the movement of many marine species and are responsible for the genetic variation that we see.

It is not always the case that large populations of any animal group will have greater genetic diversity than smaller populations. This is because a large population can be made up of individuals with identical or similar genetic make-up. Therefore, while the number of individuals in the population may increase, genetic diversity would remain low. This is dangerous for the future of species with historically genetically diverse groups inhabiting different regions. So, it is necessary to identify and sustainably manage genetically distinct local populations of economically important marine organisms as units or stocks.

So, there is a need to curb overfishing and help maintain the required population size of genetically distinct groups. It is known that fisheries induce genetic changes as they target fishing grounds. In the long run, a stable and healthy population should be capable of adapting to environmental changes.

To enable this through conservation, it is important to determine whether the targeted population consists of more than one stock of that particular species. If that is the case, then each stock needs to be assessed separately to ensure sustainable fishing practices for it.

This method has been successful in managing cod populations off the coast of Norway which have overlapping spawning grounds. The method also aided in sustainable harvesting of North-East Arctic cod, while limiting the exploitation of the Norwegian Coastal cod which is a fragile population. The identification of distinct populations of Atlantic salmon around Faroe Island, Greenland, eventually led to a ban on fishing in the region to allow adult salmon to return to rivers in Canada, USA, and Europe. While genetic data have not been used to manage shark and ray fisheries in India, there are success stories for sharks from elsewhere. Two populations of zebra sharks were identified within the Indian Ocean by the IUCN Red List Assessment, which were then assessed and protected independently.

Policies based on genetic data can help focus conservation efforts as populations can be managed as individual units. This management strategy provides an opportunity for solutions to be region-specific rather than viewing the entire global population as one. It can also aid in identifying priority areas which would make it easier to manage and monitor populations. This is essential because if any one population within a basin is extirpated, then effective replacement would not be possible due to limited movement of individuals between basins.

The need to view these globally distributed species as individual units is the need of the hour to ensure thriving populations of these enigmatic animals.