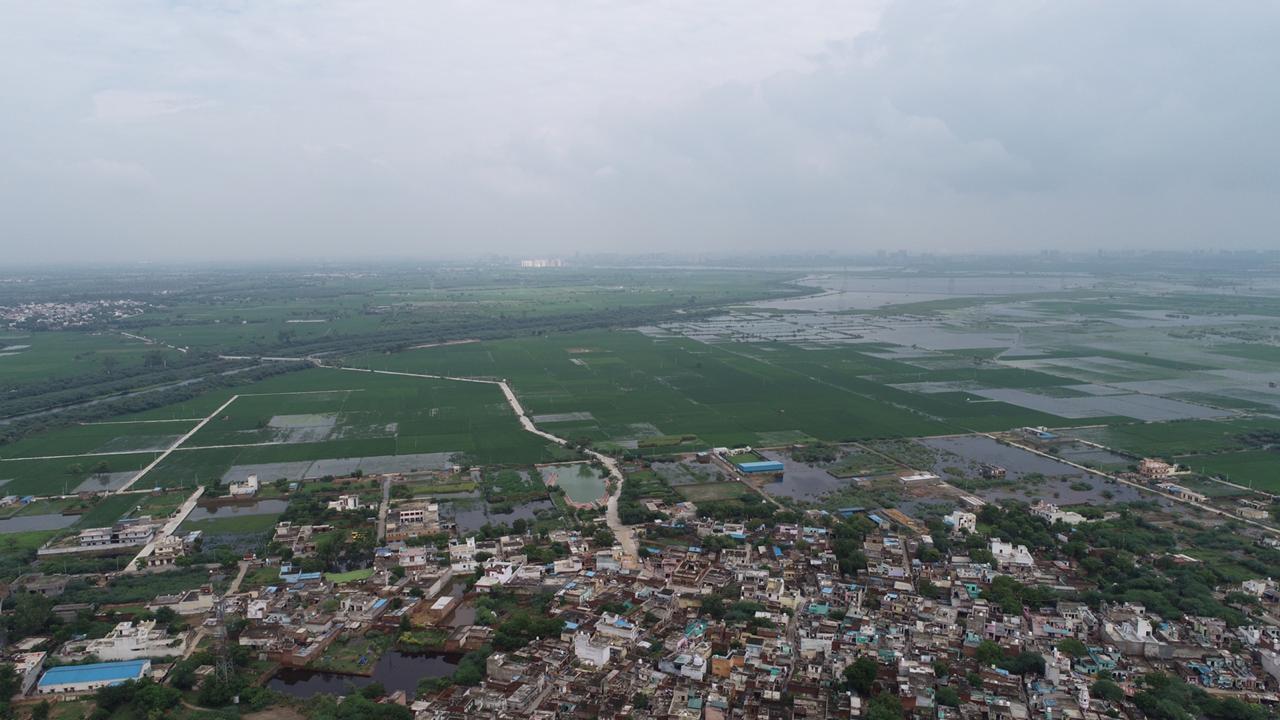 In Raota, a village in southwest Delhi, a blue wooden canoe floats. Four feet below the canoe is this year’s kharif paddy crop, now completely destroyed. “Around 700 to 1,000 acres of farmland are currently submerged,” says Rajnish, a farmer from the village.

He shares a drone video that gives a bird’s eye view of the area, made by a wedding photographer in Raota. The water over the submerged fields looks unending, almost like a lake. “It is a lake,” Rajnish ascertains, for Raota touches the Najafgarh jheel (lake)—first recorded to be 220 square kilometres wide in the 1884 edition of the Delhi Gazetteer. Today, the jheel, which is shared between Delhi and Haryana, is just about 2 square kilometres wide during the summer.

“Our fields have been flooding for almost 20 years,” Rajnish continues. “But this year, the water entered our homes too. Maybe it rained more than last year.”

Rajnish is right. This year, Delhi recorded 236.5 mm of rainfall in August, the highest for the month in the last seven years. Images of flooded roads in Gurugram went viral questioning the growing city’s drainage system. So heavy was the rain this time, that the Badshahpur drain—which carries rainwater from Gurgaon to the Najafgarh drain flowing close to Raota—was flowing at full capacity.

Water then spilled out of the drain and into Raota’s fields, including Rajnish’s too—1.5 acres of his land has been submerged for the last 10 days. “Rice from an acre of land usually gives an income of about ₹50,000 to ₹70,000. We’ve lost all of that this year.”

Why Does Raota Flood Every Year?

Flooding in the villages around the Najafgarh lake is not new. Hit by floods during monsoons through the 1950s and 1960s, the government began constructing a supplementary drain in 1978 to curtail the devastation—but only completed it in 2004.

“The problem for villages like Raota began in the early 2000s after the supplementary drain was constructed,” says Jitender, a resident and farmer of the neighbouring Juhljhuli village. “This construction did not take place on Haryana’s side of the jheel, so villages there remain submerged too [throughout the year].”

But the low-lying Raota seems to be particularly unlucky—it falls under a 5.5 kilometre stretch where embankments were not built in 1978. This was done, as reports suggest, so that the area surrounding Raota could act as a reservoir where excess water would be stored, preventing densely populated areas from being affected by the flooding. Instead, “Almost 130 acres of agricultural land in Raota is underwater throughout the year,” Jitender says.

The absent stretch of embankments is only a part of the problem. Understanding the geography of the region—and the attempts to alter it—presents more answers. Before the construction of the supplementary drain, Delhi already had a storm-water drain, created to drain out excess rainwater from the city. In 1865, the Government of the North-West Province took up the project by altering the flow of the river Sahibi which emerged from Aravallis, entered Delhi, and then finally rested in the Najafgarh jheel—and thus made this area an ecologically rich wetland. The government decided to connect the Sahibi with Yamuna by excavating it, making it a storm-water drain to manage the floods. Then much later in the 1960s, when India gained Independence, this drain was again widened to help manage the floodwaters.

Today, the erstwhile Sahibi drain is colloquially known as “Najafgarh Naala”. The naala emerges from the Najafgarh lake, hugging the Haryana border near Raota, before making a journey of around 51 kilometres through the breadth of Delhi. It then reaches its final destination, the Yamuna, at Wazirpur Barrage.

“Over the years, the land in the floodplain of the lake was either allotted to people or was encroached upon,” explains Manoj Misra, Head of the Yamuna Jiye Abhiyaan, an advocacy campaign to revive River Yamuna. While this area floods in the monsoons, during the rest of the year, it offers an extremely fertile land to cultivate.

With that, practicing agriculture in the drier months became common in an area supposed to be the natural home of the Najafgarh jheel and Sahibi river. However, the Sahibi didn’t forget it’s original flow.

“When you don’t let the river spread in its natural way, it will spread unnaturally,” Misra says. While the embankments along the Najafgarh drain tried their best to shape the course of the Sahibi, the floodwater did not forget to flow in its original, natural path, submerging its catchment area during the Monsoon. For villages like Raota which fell in the catchment area, there is no escape from submergence.

Threats to the Najafgarh jheel and Drain

The alteration of the Sahibi’s flow and a few other factors are slowly shrinking the size of the jheel. “There is an immense jump in Gurugram’s population, resulting in a lot of construction on Haryana’s side of the lake,” says Paras Tyagi, the co-founder of the NGO Centre for Youth Culture Law and Environment. The construction is impacting the surrounding groundwater levels too, accelerating the drying of the lake.

Pradeep Dagar, a farmer from the neighbouring Dhansa village also reiterates this. “Our fields are about 2.5 kilometres from the lake. We use water from the well for irrigation. 20 years ago, the water underground was available at just 16 feet. Now, it’s found much deeper, at about 35 feet.” Even the Central Ground Water Board agrees, and has classified the groundwater table of Najafgarh as “overexploited.” For drinking water, most of the villages here are dependent on water tankers.

You May Also Like: For Sangam Vihar’s Harijan Basti, Water Delivery Remains A Pipe Dream

The Najafgarh drain that leads out of the lake is facing a different threat. Apart from the floodwaters, Gurugram also deposits sewage and industrial effluents into the Najafgarh drain. The quality of the drain worsens as it snakes through Delhi, past various other similarly polluting areas. Even during the COVID-19 induced lockdown, the drain’s biochemical oxygen demand (BOD), which shows the level of pollutants in water, increased by 40 points. Since many villages along the drain use this polluted water to irrigate their fields, agricultural productivity has also come under threat. This is bad news for its final destination: the Yamuna. The Najafgarh and another drain (the Shahadra) alone account for 80% of the sewage discharged into the river. The 14 Sewage Treatment Plants sanctioned in the Najafgarh basin in 2017 to address this are yet to see the light of day.

Everytime people in ‘power’ tell you that Delhi’s water situation is better than Europe n is safe, share this video with them. This is Najafgarh Drain,one of the largest drains in Delhi,releasing over 1500 million liters of toxic sewage to Yamuna each day. #WeForYamuna pic.twitter.com/fCNLQx4z5i

“But the strangest part of all this,” says Paras, “is that in the list of water bodies in the city compiled by the Delhi Government, Najafgarh jheel does not make it to the list!” While the Haryana Government accepted the lake as a “water body” in 2017, the Delhi Government began considering declaring the jheel as a notified wetland last August. Indeed, the jheel seems to be facing an existential crisis, which is impacting its governance gravely.

“Recognising the lake as a wetland will give it a legitimacy which it has not received yet,” says Misra. Once that happens, the boundaries and contours of the lake can be demarcated, which will clearly define where construction, agriculture, and other activities are permitted. This ensures that the low-lying areas where farmers currently practice agriculture—and which get flooded—will officially become part of a “Wetland” where crucially, farming would no longer be allowed. For the revival, lands that are currently flooded will be acquired by the government.

“Some land in Raota is underwater throughout the year, we cannot grow crops on that anyway,” says Rajnish. “So, we are alright with the government acquiring our land to revive the jheel, as long as accurate compensation is provided.”

The Indian National Trust for Art, Culture, and Heritage (INTACH) even filed a Public Interest Litigation in the National Green Tribunal in 2014 seeking the jheel’s revival. Experts suggest that the lake’s revival can make available 30 million gallons per day of water for both Delhi and Gurugram.

While a wetland status for the jheel and subsequent revival can uncomplicate the governance of the lake, the management of the drain would still remain complex. As of now, many authorities seem to be responsible for the jheel and the drain, and yet no one seems to be governing it.

A 2017 study by Madhavi Bansal of Evaluserve indicates the multiple agencies governing the drain. “[The] Delhi Jal Board is responsible for the piped sewage infrastructure, but the stormwater drains come under the Irrigation and Flood Control Department. And then, [the] Municipal Corporation of Delhi has to ensure that solid waste is not dumped in the drains,” says Bansal. So when it comes to the health of the drain, the involved departments require a level of coordination that they have not achieved so far.

Till that happens, the Najafgarh lake and drain will continue to face the threats, spurred by a web of urban governance. But villages around Najafgarh, especially Raota where most of the land is submerged every year, are slowly organising for a collective fight.  Currently, Raota village is registering a Resident Welfare Association for the village. “Through the RWA then, our hope is that we can make collective representations to the government and that should increase the pressure.”