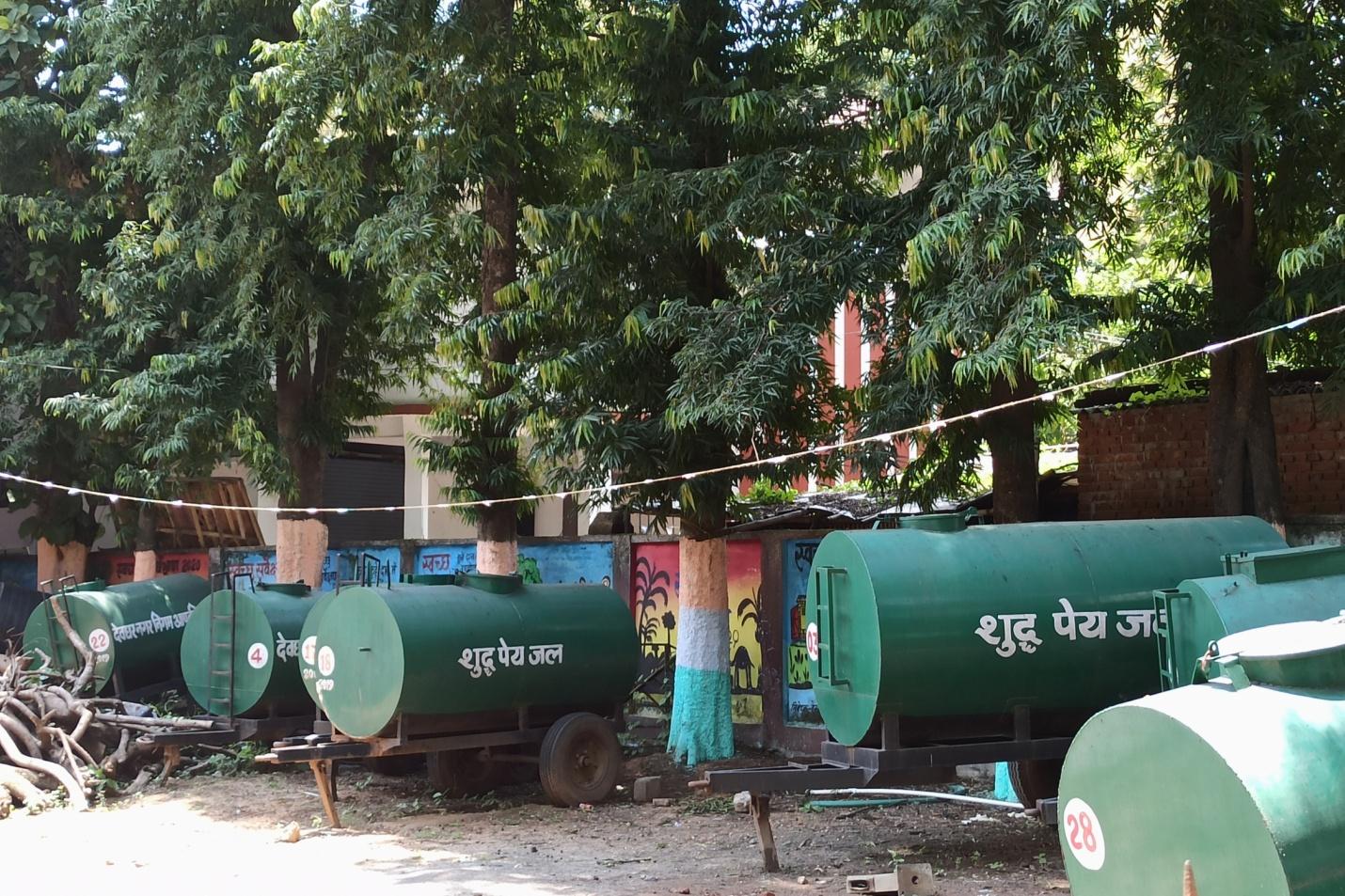 As the Prime Minister declared a 21-day nationwide lockdown on the eve of 24th March, following WHO’s guidelines, the Ministry of Health and Family Welfare advised citizens to maintain social distancing, use alcohol-based sanitisers after touching any surface, and most importantly, to wash their hands with soap for at least 20 seconds under flowing water.

On average, a person will now wash their hands up to 10 times a day as a result–which alone demands up to 200 litres of water per day for a family of five.

This is a luxury in India.

As per international standards, countries with water availability less than 1700 m3 per capita per year are termed as water-stressed. India’s per capita water availability per year was1545 m3 in 2015, squarely placing it in the water-stressed category. On top of this, as of 2019, 82% of rural households and 60% of urban households in India do not have access to piped water.

Homes in drought-hit and water-stressed areas depend on government water tankers, which provide a maximum of 20-25 litres per day per capita of water, which is nowhere near the required volume to stay protected during the pandemic. Looking at the numbers, there is no doubt that washing one’s hands regularly isn’t easy: especially in water distressed states like Jharkhand. Says Mayank*, a resident of Deoghar district in Jharkhand, “I have not seen any tankers running around recently, the supply of water is as it was before COVID-19. (..) We get water every 3-4 days, which we generally store for drinking purposes.”

Despite the fact that the state is drained by several large rivers such as the Damodar, Subarnarekha, Barakar, and Brahmani, many of its water sources are simply drying up. A 2017 Ranchi Municipal Corporation (RMC) report notes that almost 5,219 of the 12,847 privately owned lakes in the district of Dumka had dried up in the last 45 years. Similar stories are visible in other urban layouts, such as Ranchi and Jamshedpur.

Why is this the case? ‘Freely available’ natural resources are often overexploited; in the case of Jharkhand, the exploitation of groundwater in the name of development is a key factor contributing to drying up lakes, and thus the water crisis the state currently finds itself in.

Why the Crisis Hasn’t (Really) Been Solved: Development and Jharkhand’s Unique Geography

Every country is racing towards achieving double-digit growth rates; but, limitless growth cannot come at the expense of limited natural resources. The novel coronavirus, and the state of Jharkhand’s water table, are a testament to this.

India, where over half the workforce is engaged in agriculture, relies on up to 80% of total extracted groundwater for irrigation and drinking. This is in part influenced by the after-effects of the Green Revolution kickstarted in the 1960s, where several policy changes and market forces have resulted in a significant change in cropping patterns across the country. There has been a boost in the cultivation of rice and wheat, for example, which have proven to be more water-intensive crops that stress groundwater sources.

In 2011, the Centre launched ‘Bringing Green Revolution to Eastern India’ under the Rashtriya Krishi Vikas Yojana to encourage the cultivation of such crops in the Eastern states and promote food security: Jharkhand made the list. This gradual change in cultivation away from indigenous local millets and towards high-yield crops has increased the stress on groundwater in Jharkhand too, where rice is now cultivated on 1,501.77 hectares of the state’s total cultivable area of 25 lakh hectares, making it the state’s most productive crop.

But, the cultivation of rice particularly affects Jharkhand due to its unique geography: it widely falls in the Chota Nagpur plateau region. Back in 1946, British geologist J.B. Auden studied the region’s aquifers and discovered the presence of Archean rocks beneath the plateau. These rocks have lower water retention capacity, thus decreasing the water table and restricting the heavy usage of groundwater. This is particularly why the British encouraged digging lakes across the region, to retain water.

Yet, Jharkhand’s agricultural and economic development has continued, in spite of this. In the name of development, vast forests across the state have been cleared as mining activities have accelerated across the state. The Damodar and Subernarekha river valleys, two main sites of industrial mining of coal, iron, bauxite, copper, and uranium in Jharkhand, have subsequently become two of the most polluted rivers in India. In 2008, over 130 million litres of industrial waste and 65 million litres of untreated domestic waste were disposed of into the Damodar drainage system on a daily basis, causing severe damage to the river’s water quality. Ironically, though the government propagates water conservation, many of these polluting industries are government-owned coal industries too.

To overcome this shortage of usable water, the 2018 Composite Water Management Index published by the NITI Aayog underscores the need for Jharkhand to improve its surface water restoration efforts. Only ~8% of identified surface level water bodies have been restored, while the state also has “zero installed capacity to treat wastewater.”

This is needed to maintain the fragile balance between Jharkhand’s groundwater, its largely rainfed hydrological system, and the growing water demands of its population. Despite this knowledge though, such conservation efforts are widely ignored by the state government.

Authorities largely ignore the ecological necessity of reviving lakes, focusing instead on their beautification, especially in the capital of Ranchi. Water bodies like lakes and ponds are rarely maintained, due to a lack of understanding of the fragile relationship between surface and groundwater. This results in a lag between the extraction of groundwater and the recharge rate, further lowering the water table.

However, even these efforts are at halt because of the pandemic, which may make restoration more difficult in the long run. As a member of the management staff at the Saheb Pokhar Park, Deoghar, says, “The government has undertaken this pond and converted it into a park. The grass and wild plants used to be continuously cut, but now that’s stopped as the staff are staying home. People always throw waste in the pond anyway–to what extent can the management clean it?”

Yet, state officials continue to view the water crisis as a supply shortage problem; and so, they plan to tackle it by sending out more water tankers, and using piped water from reservoirs. Though last mile connectivity is very important, watershed initiatives are often ignored amidst this all: incentives for channelizing water from the catchment area down to the valleys largely remain absent. Restoring surface water requires desilting and renovating old lakes, and constructing check-dams and farm ponds to collect rainwater which otherwise would drain off, could be the key to meaningfully addressing the crisis.

The technocratic approach seems evident from the Central government’s policies too, which insist on solving the issue of scarcity through technological advancement. For example, back in the 1950s when tubewell technology was introduced to India, it was specifically used for hard rock areas as manual digging of wells was not easy–areas like Jharkhand. As the state’s groundwater levels started declining over the last two decades, tubewells grew popular. Yet. today, tubewells have created so much pressure on Jharkhand’s groundwater that deep aquifers have dried up in cities like Ranchi.

In 2016, many areas in Ranchi were declared dry zones. The crisis was so severe that the Jharkhand High Court intervened suo motu on a PIL to seek detailed reports from the city’s 55 ward commissioners. The lack of coordination between different authorities was visible as despite warnings from the Central Ground Water Board (CGWB) of depleting water levels, the RMC had continued issuing licenses for more tubewells.

A way out of this crisis is to understand the interlinkages between different government departments, and how to converge them into a single-window operation for better-coordinated work. The Central and state governments must work together to ensure that their conservation efforts converge.

For example, the Centre’s Smart City Mission overpowers the jurisdiction of Urban Local Bodies (ULB) resulting in decisions being taken by a rather distanced authority. In the case of Jharkhand, Ranchi is its only Smart City, so the effects of this overlapping responsibility could be more pronounced. After all, while the Centre states in an undated Smart City report on Ranchi that “83% of the streets have water distribution network[s]” and “48% households have water connections” the city still faces water woes while residents of other less-feted areas like Mayank have shaky access to regular water. The report again stresses access to piped water, instead of recharging groundwater.

And so, instead of a top-down approach to water management, a bottom-up participatory approach may fare better instead. Setting up a high powered committee consisting of central and state government officials, along with the ULB representatives, members of civil society, and field experts is a step in the right direction. Field inputs from ULBs, civil society, and field experts will enrich the designing and planning of conservation efforts.

In this light, the Gandhian philosophy of a village-level economy has huge ecological relevance. Focusing on further empowering village and district authorities can help inculcate the idea of water as a common pool resource, and promote community management of commons like water bodies. If communities and authorities are stakeholders in water management rather than mere beneficiaries of it, responsible management may be more likely. The Central and state governments should simply act as guiding institutions and financiers, and recognise lower levels of government, such as the district level offices, as the key planning and decision-making authorities. Even if they have been heavily undermined in the state by the state government in the past, agitating for better implementation of laws like the Panchayati Extension to the Scheduled AreasAct, 1996 where decision-making powers are devolved to the local Gram Sabhas and Panchayats could be a step in the direction towards accountable development.

For Jharkhand to achieve true Atma Nirbharta in water management, the state must be ‘Vocal for local’, that is, vocal for local topography, ecology, and needs.