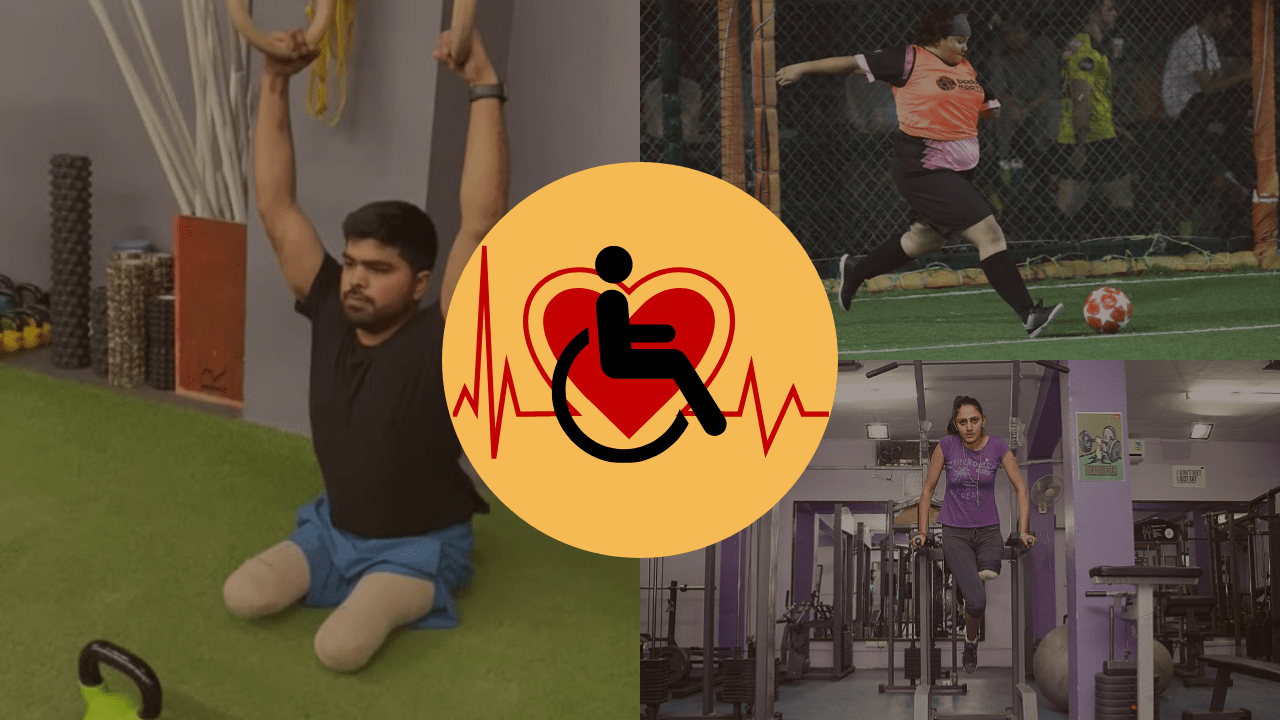 One of the many things that coronavirus-induced lockdowns have shown us is the value of personal health and fitness. To the privileged few who could find space in tightly-packed cities, “quarantine workouts” became the rage; at the same time, many still longed for access to their past fitness regimens, be it walking outdoors, playing a sport with their friends at the local playground, or working out in a gym.

As the second wave of COVID-19 begins to recede across India, gyms, parks and playgrounds have begun to open up again, much to the relief and excitement of fitness enthusiasts. The past 15 months of on-and-off lockdowns have been challenging mentally, and emotionally, and the lack of outlets for physical exercise made coping harder for many. But when you think about it, the lack of access to a physical outlet for exercise is the status quo for a majority of differently-abled people.

“I would have started playing football earlier if I had the opportunity to do so,” says Avani Nagar, who was “born with a small hand”. Today, the 28-year-old Mumbai-based amateur footballer plays as a goalkeeper, and is a very good one at that too. “Society and Opportunity are the two things that can make or break you [as a differently-abled athlete],” she says in retrospect.

Even in the most modern cities that India can boast of, the differently-abled are still excluded from regular fitness infrastructure and sports services. They find themselves embedded in a culture that furthers their self-optimization. That fitness and exercise have immense health benefits for individuals is well known, but even more so for the differently-abled. Let us vital to collectively push for more inclusive spaces for sports and fitness, for all types of bodies.

There is a dire need

Almost 2.7 crore people are differently-abled in India to varying extents, which accounts for 2.2% of our population. According to the WHO, approximately 2 million deaths per year worldwide can be attributed to physical inactivity. People who are differently-abled are more susceptible to living sedentary lifestyles, which increases the risks of muscle wasting, pressure sores being formed, as well as doubling the risks of cardiovascular diseases, diabetes and obesity.

“Disability was a part of my life, but I was sure that I didn’t want it to become my entire life,” Sajan Sachadeva (28) tells us. A senior category manager at Amazon and an alumnus of IIM Bangalore, Sajan is a bilateral amputee, who lost his legs due to an electric shock when he was just 9 years old. “At first, it used to be awkward to fall in front of the children in school [when I played cricket],” Sajan recalls, “but I was very fortunate that people never made fun of me.”

Persons with disabilities report frequent mental distress, anxiety, and depression — almost 5 times as often as able-bodied persons. Regular fitness-related activities, including weight training, cardio, crossfit, and yoga, are healthy ways to cope with mental stress. Staying fit boosts energy and morale, stimulating various feel-good brain chemicals. Yet, for a variety of reasons, the differently-abled find it difficult to find an avenue for physical activity. “I have been to a gym for a brief period of time,” Avani says, “but there are certain people and gym equipment which aren’t very friendly [to our conditions]. If you’re in a society which accepts you for who you are, it gives you immense confidence.” The “right to play” is indiscriminate in its definition; services and infrastructure for fitness and sports in cities rarely account for the needs of persons with disabilities.

The Struggle is Real

“I was lucky to have been born in this generation, where the thought process [with regard to the differently-abled participating in football] was changing,” Avani says. She started playing football at the age of 11 in her school, Bombay Scottish. “I had the right environment where people treated me well,” she adds, crediting her coaches and teammates for instilling confidence in her, even when she felt like an introvert.

Avani and Sajan have both overcome great adversity and broken typecasts, but they are outliers to the status quo. Overcoming their personal mental blocks was only the first hurdle in their journey as differently-abled fitness enthusiasts. The bigger hurdle — one which is out of most individuals’ hands — is a fitness ecosystem that can often be intimidating and hostile.

The real difficulty [in staying fit] is not being differently abled. It is that before you even do anything, people have already formed an opinion about your capabilities — what you can and cannot do, and so on. This can damage willing [differently abled] individuals’ belief in themselves

It is a “privilege” to be able to keep fit as a differently-abled citizen in the truest sense of the word. Besides many having to manage without full-time caregivers, most of India’s persons with disabilities face stiff stigma in their immediate communities when it comes to playing or working out, which denies both the opportunity and dignity to exercise freely.

“Being mobile requires a certain capacity to spend,” Sajan points out, speaking from his experience. Most regular prosthetic limbs aren’t amenable to movement. In fact, Sajan even suffered a tumour in his leg because his wooden prosthetic kept rubbing against his skin, which led to another operation. “The prosthetic legs I got [later] in 2016 for 30 lakhs would cost me 45-50 lakhs right now. Unassisted wheelchairs range from 2.5-3 lakh rupees.” Sajan finds that India lacks the infrastructure to manufacture assistive devices for the differently-abled, and importing them is prohibitively expensive. “Even the customs duties are steep because assistive devices are classified as cosmetic, rather than medical.”

The Path Ahead: Gyms need to be more friendly, better equipped

Assistive devices and gym facilities notwithstanding, India has little to no infrastructure for the disabled.  Most roads and footpaths present treacherous ordeals even for those who use wheelchairs and prosthetics.

Sajan says, “People don’t think that it is equally important for persons with disabilities to maintain their fitness. I survived my accident, but now it is up to me to take care of my health and fitness. I don’t want to be dependent on others in the future.” He started his fitness journey by following workouts on an app but soon found this ineffective and restrictive. It was when he joined Cult Fitness in Bangalore that he met his coach Rishabh Telang. After assessing Sajan, Rishabh personalized a schedule and began tracking his progress. Sajan says he has been dedicated to his workouts ever since. “Initially, I felt like I had to be treated special, but eventually, as I moved along, I found that I could work out in a larger group class setting as well.”

“We need to understand why an exercise is performed and how it works along with which muscle group is being targeted,” Sajan says. “I thought I couldn’t squat, but then I began to use a sofa or a bed to assist myself. For a differently-abled individual, slight modifications can make a world of a difference”.

Getting professional help is still critical in avoiding the risk of injuries. “There are several options for staying fit which aren’t being explored”, says Sajan. Along with experience, trainers and coaches need to be empathetic. Patience is an important factor when we look at cases like Sajan’s; his slow and progressive program happened to work out well for him.

“Most setups with trainers only conduct group classes,” says a coach and owner of a gym in Bangalore. “Given the general level of knowledge amongst fitness trainers in India today, I would recommend trained physiotherapists, who know their way around this domain of physiological fitness relatively better. It will improve their quality of life.”

“Most traditional gym setups only conduct group classes,” says Bangalore-based Niran Ponnappa, the founder of TFD CrossFit and a fitness expert at Cult Fit. “They don’t have the qualified therapists to work on the differently-abled. The fitness market in India is still growing and learning to cater to the immense opportunities that exist in building an ecosystem for all.”

As things stand, even in India’s metros, most fitness centres are hostile spaces for the differently-abled. Gyms tend to promote a certain culture of physical perfection that can alienate everyone who is not already at peak fitness. Trainers tend to stay away from the differently-abled, seeing them as a liability. This is in part attributable to a gap in the training imparted to fitness instructors. “There were always too many stairs,” recalls Sajan. “Coaches would try to stay away from working with me.. even those who genuinely wanted to help were unable to”. Similarly, Avani says she often found herself resigned to walking on the treadmill while avoiding the rest of the gym because she was “sure the treadmill would not hurt her”.

Improving the overall fitness of India’s population is critical to developing the country’s human resources. With diseases linked to sedentary lifestyles on the rise, addressing the health and fitness of this section of India’s population can reduce the burden on our healthcare sector in the long run. Perhaps our time spent in lockdown has added some perspective on how restricting it would be to not have an avenue to remain fit and explore the physical potential of one’s own body. Perhaps the ‘new normal’ is an industry and society that recognizes and caters to the needs of the differently-abled; to help them play freely and realize a fitness that leaves no bodies behind.