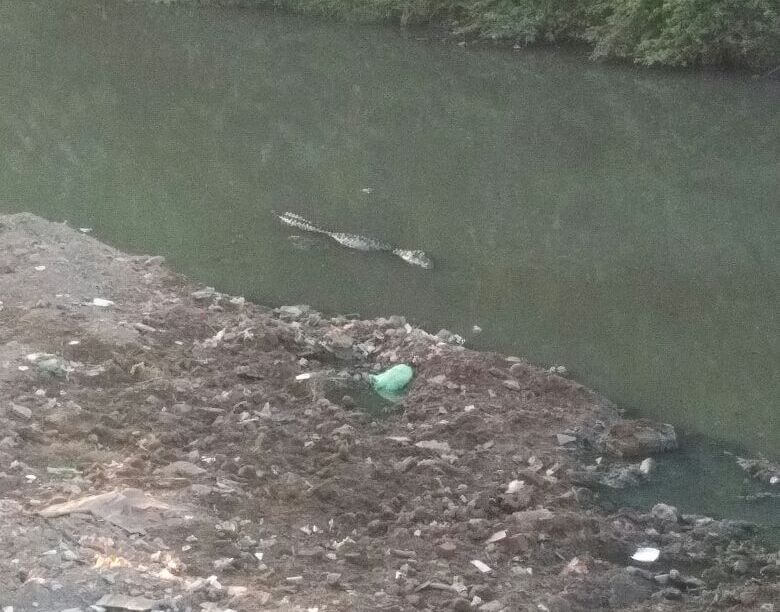 Following a dirt path covered with brambles and wild grass reveals the languid waters of the Vishwamitri River. The faint odour of sewage, characteristic of the waters, numbs my nose. A few white cranes sit perched on the edge of the bank. Raju Mali, the auto driver who accompanied me, points out three fully-grown marsh crocodiles sitting on the bank, partially hidden by the long grass.

The Vishwamitri River emerges from the hills of Pavagadh and flows through the heart of Vadodara city in Gujarat. It empties into the Gulf of Khambhat. Legend has it that Sage Vishwamitra — who the river is named after — created a moksh-dwar (gateway to heaven) for downtrodden Hindu people at Kayavarohan, a village in the Vadodara district. The river is named after him.

The cultural significance of the Vishwamitri, however, belies the plight of its waters today. Factories and hospitals dump large amounts of chemical and organic wastes into it. And, while cleaning the Vishwamitri has been a priority for many, it has been just that; a priority.

For a city populace that consistently laments the deplorable condition of the river, the ambitious VRDP comes as a breath of fresh air. The plan claims to ensure flood mitigation and provides “landscape-design solutions”. It seeks to “enhance the cultural importance of the city”, “restore the connection of the river with the people” and “address the future needs of the city”. Despite the grand promises, the benefits are far from obvious, and a closer inspection of the issue reveals several technical and bureaucratic blunders.

A longstanding environmental activist and an outspoken critic of several insidious government projects, Rohit Prajapati has spearheaded the opposition to build a Vishwamitri Riverfront since 2014.

The project seeks to mimic the model of the Sabarmati Riverfront in Ahmedabad. As it turned out, VRDP work had begun in several areas even before the completion of due processes by the ‘Environment Impact Assessment’ (EIA) and ‘Environmental Clearance’ (EC). An application filed by Prajapati and his team to the National Green Tribunal (NGT) in 2016 comprehensively explains the various shortcomings of the project and the illegality of the work underway.

For Prajapati, a revision of the understanding of a river is the ideal beginning point of any discussion. “I am going to argue how rivers should be defined. I am going to argue for a definition of a river,” he said, as he began explaining the complexity of a river system. The application he submitted defines a river as “more than a channel carrying water”. It is “a natural, living, organic part of a larger ecological system”.

The immediate and recurring result of negligence is seen in Vadodara’s flooding crises. Prajapati explains the importance of ravines. “A ravine is the natural flood control device of the river. Why do you have such flash floods, in a river that does not have so much water?” The answer, as explained in the report, is simple. Leave alone factories; even the Vadodara Mahanagar Seva Sadan (VMSS) has played a major role in dumping untreated sewage and solid waste into the ravines. With a slope of less than 5% on average, the floods are entirely avoidable and caused largely due to a clogged water system; the VRDP makes the flooding crisis worse

The VMSS cites two contradictory reasons for acquiring slum land. The first that it is to create the real estate for development. Yet, as Prajapati’s report states, there is plenty public and private land lying vacant for such purposes. Taking more land connected to the river corridor is unnecessary. The VMSS’s second reason is that the threat of floods looms over the people living in the slum. Thus, they say, it makes sense to empty those areas. However, the construction activities at the site tell a different story. The development plans that involve making residential and commercial complexes will only increase the footfall in the region, which does not mitigate a flood threat.

The marsh crocodile, the Ganges softshell turtle and numerous species of fish inhabit the Vishwamitri River. Several of these species have been categorised as nationally ‘vulnerable’ and are listed in Schedule I of the Indian Wildlife (Protection) Act 1972. Incessant dumping in the river and unauthorised activity on the river corridor poses a severe threat to aquatic life.

Ultimately, Prajapati and his team of lawyers, engineers, environmentalists, economists and students succeeded. NGT passed an order to suspend all activities. Prajapati notes, “They realised they won’t get VRDP clearance because we are not just challenging this, but we are also making the point that the whole project is problematic. The premise is wrong. The idea to do this [project] will damage the river. So they realised they had to drop the project.”

Yet, construction along the river corridor is still functional. Prajapati points out the VMSS’s attempts to compare it with the Sabarmati project. “They forgot to take separate clearance. They thought that if they got VRDP project clearance like they did for Sabarmati, then other projects can be taken care of in the name of EC for the Vishwamitri River.” He seeks to have the Mukhya Mantri Awas Yojana projects — launched near the Bhimnath bridge and at Sama-Sanjay Nagar — contested to ‘set an example’.

Prajapati refers to the VRDP as PM Modi’s ‘pet project’.  The stakes for those involved are high. VMSS attempted to get an expo facto clearance for the project, but that too was challenged in court. Prajapati and his team sought a complete rejection of the project. However, the project was merely withdrawn. After consulting a number of experts (barring Prajapati), they came to the decision that the river cannot be discussed in bits and pieces. The new project proposal is being planned according to the National River Conservation Plan (NRCP) which will deal with the river as a whole, not just as the 16.5 kilometres that pass through Vadodara. It will allow for comprehensive river planning systems that ensure long-term benefits for the entire ecosystem.

“When you struggle on the ground, you need research; use all means to make a point. You can’t win a battle only by philosophy or ideology alone, or simply in the streets, or the court.” The tenacious battles waged by Prajapati and his team come at a cost. Prajapati faces two defamation cases, with a penalty of 25 crores and 3 years in jail. Threats are routine. Upon being asked why he does not seek state protection, he smirked and replied that he receives more threats from the state than from non-state actors. Yet it does not impede his enthusiasm. Taking circumstances in his stride, he remarks “It’s a risk of life. Even if some of us have to go a little bit earlier, fine.”

And it seems the risks may pay off well. The VRDP will set a precedent for all such riverfront projects across the country. “Everybody is looking at what will happen to Vishwamitri, even the government is very cautious since the matter is pending before the Supreme Court…So they are on hold, they are making announcements, but they are not going ahead with it.” Everyone is waiting and watching.

The team sits on the steps leading to the banks of the Vishwamitri on Saturdays. It is their new congregation point. Prajapati is speaking to a PhD student. A few people stand around him, dutifully overhearing his conversation. An old man with thinning white hair stands next to me, peering at the ochre waters. “I used to drink this water right from the river,” he says to no one in particular. “When I was ten.” Now I am sure he is addressing me. All I can do is nod along and try to indulge a man’s memories — ones which he will probably never get to relive and ones that I can only hope to live someday.

Files below include the documents presented by Prajapati and his team before the National Green Tribunal.