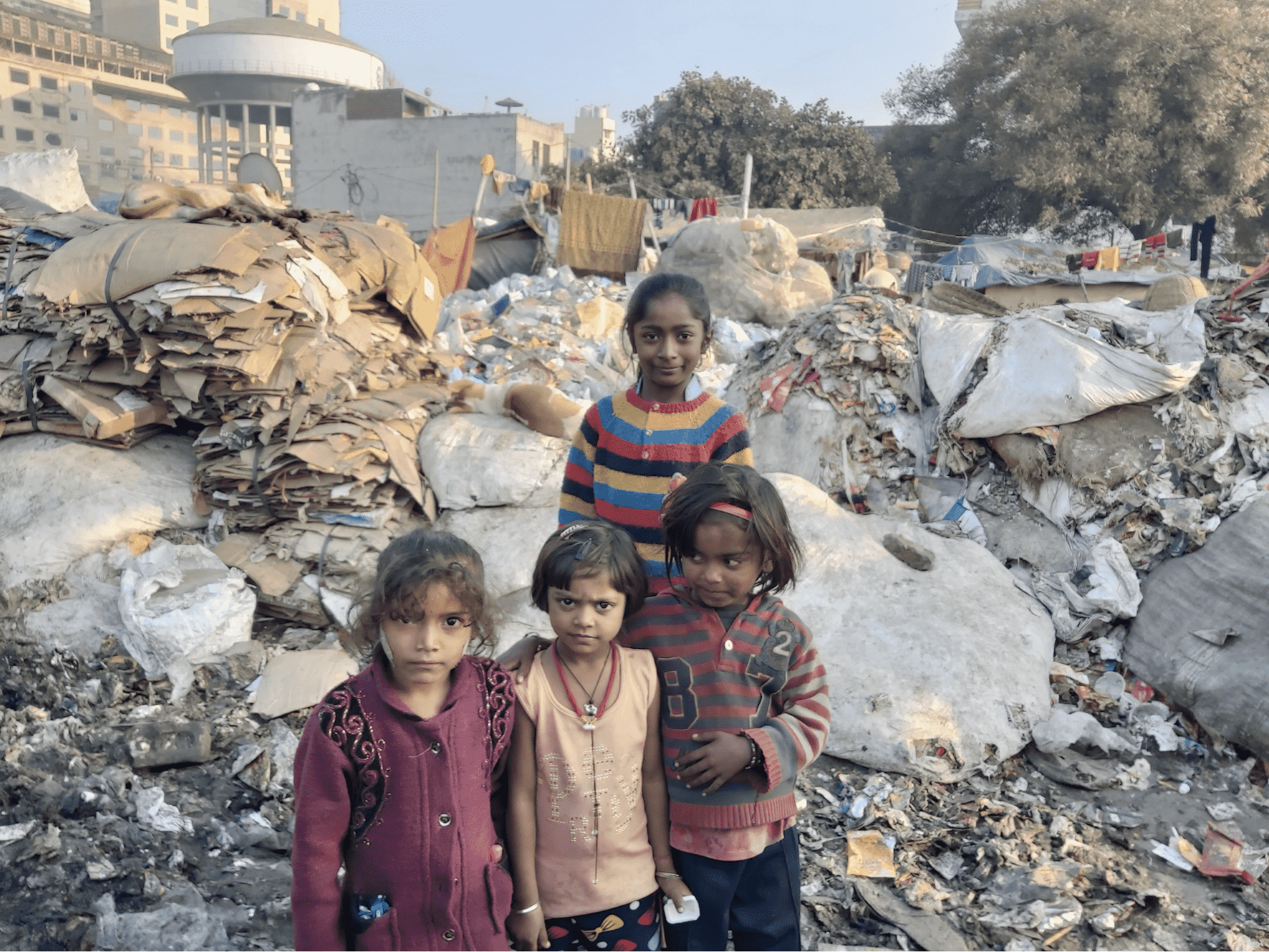 Take a minute and think about how you’d feel if your garbage bag wasn’t picked up, and left lying in front of your door instead. Now, imagine this: some people work, eat, sleep, and live in and around mountains of garbage every day. This is the story of families from a ragpickers’ colony in Kaushambi, Ghaziabad. People here, mostly migrants from Bihar, West Bengal, and remote parts of Uttar Pradesh, have been living in the community for years. They start the day as early as 5:00 a.m., collecting garbage from nearby societies and sorting it out afterwards. Many of the community’s children engage in the profession too. Even as we race ahead in the 21st century, child labour is still prevalent across the country.

According to the 2011 Census, the total number of child labourers in India, just between the ages of 5–14, is estimated to be 10.1 million. Ragpicking, perhaps one of the worst yet widespread forms of child labour, violates basic human rights to health and education. Why are children seen collecting scraps instead of going to school?

Be it urbanisation or industrialisation, the consequences of the tonnes of waste being produced by India’s cities are troubling. The Minister of Environment, Forest, and Climate Change Prakash Javadekar has stated that India will, in another couple of decades, generate nearly thrice the waste it currently does, or “165 million tonnes by 2030 and 450 million tonnes by 2050.” With poor techniques of waste management, a rise in landfills and contaminated land in Indian cities has been witnessed. Municipalities are struggling to effectively handle the waste due to a lack of planning, expertise and man force.

#SWM2016 Integration of Rag pickers and Kabadi Walas in the formal system should be done by State Government. #TransformingIndia

Then, there are the invisible troubles of the thousands of informal ragpickers who earn their livelihoods by collecting, sorting, and trading this waste. Till now, India has managed to collect, segregate, and dispose of waste largely due to the efforts of ragpickers making them the backbone of this sector. By some estimates, ragpickers are responsible for recycling almost 20% of the country’s waste. Yet, while ragpickers play an important role in maintaining the health and hygiene of the local environment, their status in the Indian waste management system remains highly unrecognised. This is certainly worrying when you look at the numbers: there are an estimated 1.5 million to 4 million ragpickers in India. Delhi alone is home to 80,000 to 1,00,000. Although taken up by adults, many children take up the profession too. Why might this be happening?

The Rights of Child Ragpickers

“I have never gone to school but I want all my kids to study well and do dignified jobs, unlike us. They will end up doing dirty jobs if they don’t go to school.” says Kiran.

Child labour pervades in spite of the fact that India has passed a number of constitutional protections and laws on child labour, including the Child Labour (Prohibition and Regulation) Act of 1986. Under the Occupation and Process section, it specifically mentions types of hazardous employment for children below 14 years of age, which includes ragpicking and scavenging. The government has also enacted the Unorganised Workers’ Social Security Act, 2008 for the welfare of unorganised workers under which ragpickers are covered. However, whether these laws are truly enforced for children engaged in ragpicking or not remains another question.

While the goal of the Right To Education Act is to provide free and compulsory education of good quality to all children between the ages of six to fourteen years, child ragpickers remain mostly absent from the population of school-going children, and in the minds of policy-makers.

This state of affairs has far-reaching consequences. Poor access to quality education deprives the community of upward mobility and further decreases future chances of gaining more protected work. The reasons for dropouts are many and include a lack of a captivating education environment in school, difficulty in understanding the medium of instruction, lack of motivation from the family, poor schooling facilities, evictions, and frequent migration. As a result, many children follow their family’s footsteps by taking up ragpicking. Some are forced into the occupation, as no one else is willing to do the ‘dirty work’ performed by the castes and communities of India’s ragpickers.

The factors affecting child ragpickers are unique then, and thus education needs to be much more than just a brick and mortar initiative for this community. Ragpickers, especially children, are regularly exposed to cuts, chemical poisons, and infections, and are also susceptible to diseases like cancer and tuberculosis. All of this is aside from the general poverty, harassment, substance abuse, and sexual violence they encounter on the streets. Because of malnutrition, children from these communities are often stunted. For the young girls and women living in Kaushambi, anemia, gastroenteritis, and jaundice are prevalent due to the lack of proper nutrition and unhygienic living conditions they are confined to. Therefore, to educate children from the community is to take into account the unique factors that have come to define their lives.

Amidst the Rubble, A Few Positives

Several organisations have been working for the rights of ragpickers and providing their children with formal education. Phia Foundation, which is running an urban education program in Ghaziabad, NCR, and Madanpour Khadar in Delhi, has been working with children in ragpicking communities to provide them with access to basic schooling, nutrition, and healthcare.

They work directly with the children, by providing basic bridge schooling (or small scale education initiatives) that can help them re-enter the mainstream education system. The organisation is also actively engaged in providing remedial education for mainstreamed children, conducting activities addressing the educational needs of out-of-school children, teacher training, providing nutritious food to children on a daily basis, and organising free health camps for locals. Through this work, Phia Foundation, in spite of facing its own set of challenges, has been educating 200 children with the help of just 4 teachers.

Then, there’s Ghaziabad’s Asha Deep Foundation, which focuses on child ragpickers between the ages of 3 to 14. Besides providing them formal education, they also operate several recreational activities to dissuade children from taking up drugs. IPCA, based out of New Delhi, has developed a specific curriculum for the students, which is taught by the youth of the ragpicking community to younger children. Similarly, SWaCH, an organisation in Pune providing front-end waste management services, has been providing formal education to the children of the ragpickers employed with the company.

However, although there are a few positive small scale efforts in different regional pockets by various non-governmental organisations and individuals, they’re just not enough. While there are several state and central government initiatives for educating children from marginalised communities, the children of ragpickers have completely fallen through the cracks of India’s formal education system. They find no mention in policy documents or speeches, rendering their education invisible to the state. In the absence of a serious will to implement the plentiful government policies against child labour and provide these children universal primary education, organisations like Phia and local community leaders, have been setting positive examples through their tremendous efforts to educate children in difficult circumstances.

As nations continue to talk about sustainable development, there is an urgent need to shed light on the health and education of ragpickers, for whom economic growth and prosperity in India has bypassed. Robust legislation followed by effective implementation, and creating much-needed awareness on education amongst parents and children, will make the dream of bringing children from scraps to school true.