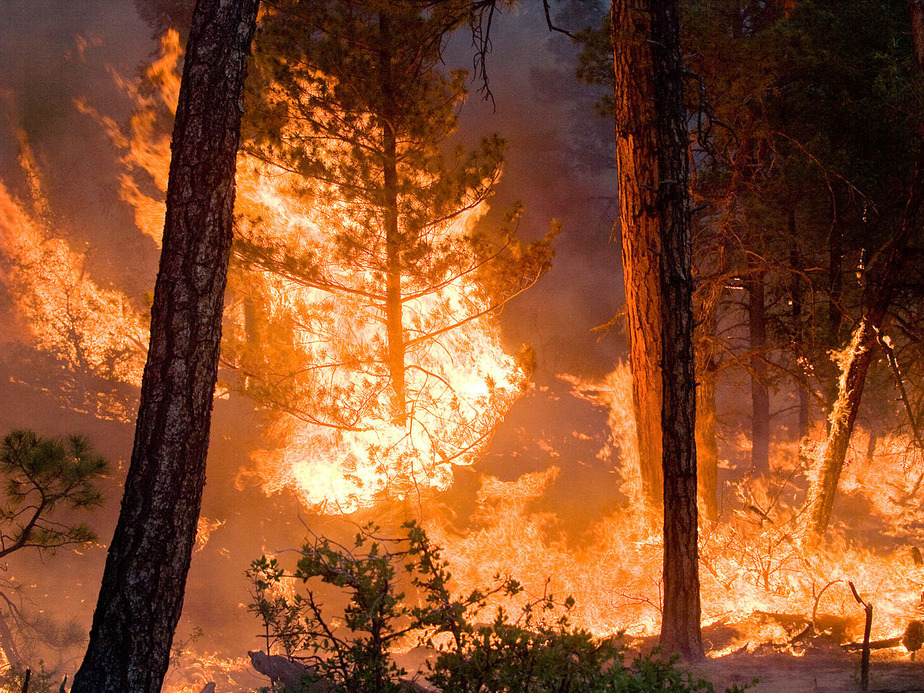 Researched and Written by Sourya Reddy

The Thomas fire, currently raging in California, has burned more than 150,000 acres since it began a little more than a week ago, on December 4th. The fire has forced at least 50,000 people to evacuate (as per December 8th estimates) and has cost an upward of $17 million to fight. Although this fire’s cause is unknown, in recent years, such large wildland fires – or wildfires – have become increasingly common, scores of people have been affected, and the economic costs have been devastating. For instance, between 2000 and 2009, property damages in the U.S. due to these fires averaged $665 million per year. To truly prevent the loss of life, property, and money, we must understand why such wildfires are finding a spot in the global community’s everyday life.

Wildfires need to have three essential components if they are to burn; oxygen, fuel and a heat source. A fuel here refers to any flammable material, like trees, grasses, and even houses. The greater amount of fuel in any given area, the higher the chances of a dangerous wildfire. Heat sources are anything that can spark a wildfire, from cigarettes and campfires to lightning.

Weather conditions also play an important role in the build-up to a wildfire; dryer weather conditions convert green lands to dry lands, which increase the fuel load of an area. Further, warm temperatures assist in the combustion process. When you add strong, dry winds into the mix, then you have the perfect combination to start a wildfire with a high possibility of spreading.

According to the U.S. Department of the Interior, 90% of wildfires in the U.S. are started due to human acts

These include things like unattended campfires, broken power lines, careless cigarette disposal, debris burning, and arson. Wildfires are the most common in the western part of the country; droughts, thunderstorms, and heat in this region create favourable conditions.

So Should We Suppress All Wildfires?

The most interesting thing about a Wildfire is the ecological importance it holds. Until some years back, it was common global forest management practice to suppress any and almost all fires. However, when these fires are suppressed too often, dead biomass remains and builds on the pre-existing dead material to increase the fuel load of a forest. So wildfires, in this case, would be more intense and more frequent, eventually endangering human communities. The burning of dead biomass returns essential nutrients to the soil, and hence kick-starts regeneration, by clearing the forest floor and making room for ideal growing conditions. Several forests have in fact evolved to use these outbreaks of fire to preserve the health of the ecosystem.

A cycle of rebirth begins from the ashes of a fire; in most cases, grasses and weeds are the first to grow and are eventually followed by taller plant species that grow much slower. The first of these species are often small pines, which are followed by larger ones. This ecological cycle reaches its climax with the growth of hardwood species, such as oak and hickory.

However, if these fires are started by human acts, the natural processes of the forests are disrupted. This disruption, when accompanied by suitable temperature and wind conditions, leads to significant damages to both, the growing forest, and nearby human settlements. California is undoubtedly the best case in point.

The Case of California

California sees the highest risk of wildfires, which are often made more powerful due to the hot, dry Santa Ana winds. When one looks at more wildfire-related numbers of the state, sufficient cause for worry emerges.

Verisk’s 2017 Wildfire Risk Analysis showed that close to 4.5 million houses were identified at extreme or high risk. California accounted for more than 2 million of these houses!

Annually, the U.S. Forest Service spends close to $200 million to control and suppress 98% of the wildfires. Due to the remaining 2% that cannot be suppressed in the initial attempts and become widespread, the amount crosses $1 billion. Seven of the ten costliest wildfires in the United States have taken place in California. 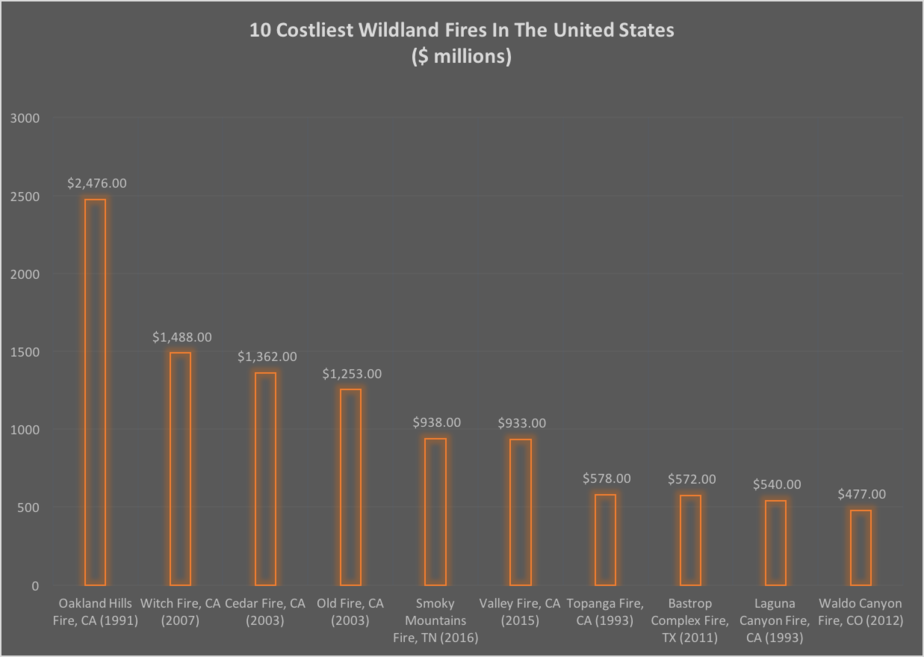 As of today (12th December 2017), there are five active wildfires in this one state alone, and a further four contained ones.

The scary thing is that it’s not just California. The Union of Concerned Scientists (UCS) says that every state in the Western U.S. has experienced an increase in the average annual number of large (more than 1000 acres) wildfires. Since the 1970s and ‘80s, such fires taking place have increased by almost 5 times. They also last five times longer, while burning six times the land area! What’s even worse is that the wildfire season (seasons that see higher chances of wildfire instances) has steadily become longer over the past 40 years.

Wildfires are significantly increasing in number, frequency, and intensity all over the world. Take for instance the deadly Indonesian fire of 2015, or the nearly uncontrollable fires in Spain and Canada in 2016. Let’s look at this year itself; several regions in Chile were victim to massive fires, and Portugal’s wildfires saw the loss of more than 70 lives.

We are. In addition to carelessly igniting dangerous wildfires, our indiscriminate activities which result in accelerated global warming have a very real effect on wildfires. A rise in global temperatures will create drier, warmer conditions (conditions that are suitable for wildfires). Evaporation increases because of such temperature rise, thereby making the soil drier and increasing the fuel load in forests. It is thus projected that moist, forested areas will increasingly face threats of wildfires. Dry grassland areas, however, are predicted to face lesser outbursts of wildfire, albeit not for any good reason; conditions will become so arid that these grasses may not grow at all! Climate Change has also led to a global increase in the duration of wildfire seasons, in the number of wildfires and the intensity of the same. 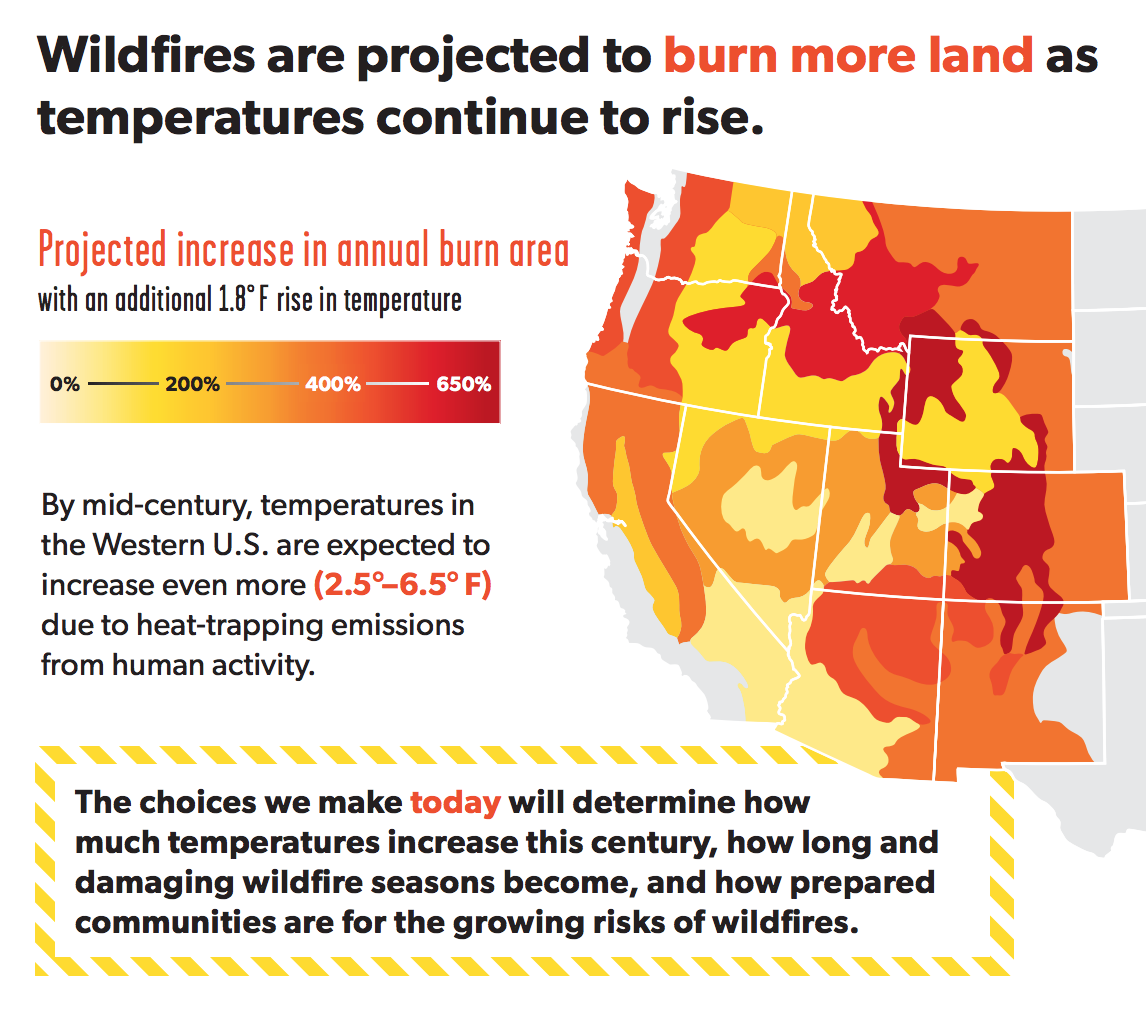 With temperatures expected to rise throughout the course of this century, prevention of damage from wildfires must be a top priority. Steps like creating a buffer zone between susceptible forests and human habitation, institutionalizing and maintaining basic fire-safety standards in human settlements must be taken. Lastly, and most importantly, we must double down on the efforts to become a global, green community. If not, instances of such dangerous occurrences will only increase in number and intensity.