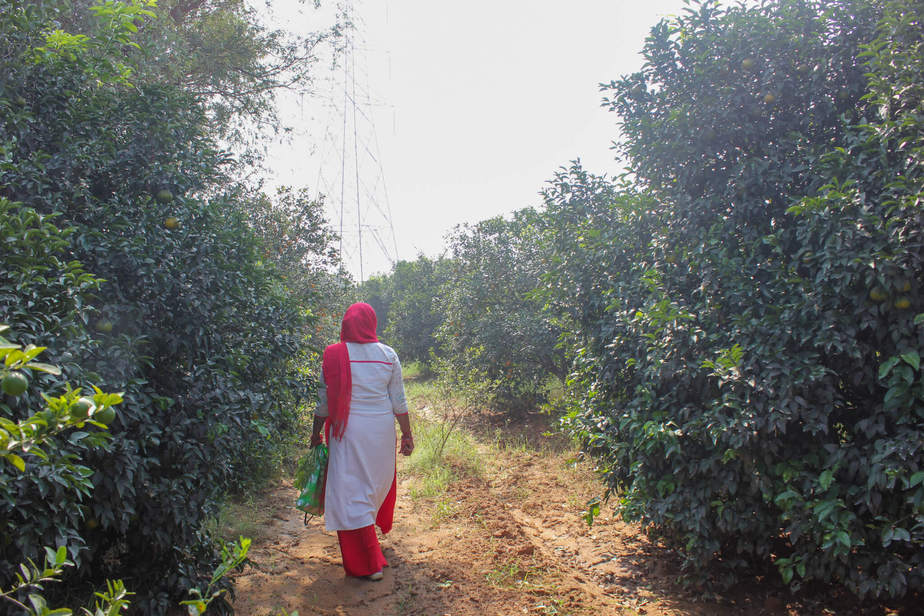 Asha’s husband did not believe her initially. Neither did most of her neighbours in Pichompa Kalan, Haryana. An orchard of citrus fruits, mangoes, watermelons, amla, jamun, apricot, pulses and cereals—how could that grow given the limited productivity of red and clayey soil of the region?

But for the last 10 years, Asha, with help from her family as well as hired labour has been growing all of that and more. And the trademark of these—they have been grown with chemical-free inputs. This is akin to what Nirmala Sitharaman, the Finance Minister in her speech of Budget 2019-2020 mentioned when she said, “We shall go back to basics on one count: Zero Budget Farming.” This type of farming emphasises on elimination of chemical pesticides, sustaining agriculture with eco-friendly processes, and restoring soil fertility and organic matter.

How Is This Different?

About 25 kilometers from the district headquarters of Haryana’s Charkhi-Dadri, Pichompa Kalan is home to about 3,200 people. A negligible number of them practice chemical-free farming. Amongst them are Asha and her daughter-in-law, Jyoti, who spend time every morning and evening in their 3 killa (3 acres) of land, pulling out unwanted weeds. The trees of lemons, oranges, sweetlimes are interspersed with vegetables like spinach, methi (fenugreek), and pulses like chana (gram), bajra (pearl millet), and wheat. She is also currently experimenting with custard apples within the same fields. Intercropping is considered to be an important aspect of Zero-budget farming.

The farms also require constant attention; one attack by pests is enough to ruin the entire crop. To avert pests from attacking, Asha resorts to a spray made of buttermilk, which is kept in a mud pot immersed in cowdung for about 3 months. Another method to keep the pests away is to burn guggal, a resin available from trees. “Our grandmothers used to prescribe this method of burning guggal during the flowering stage,” she says.

To increase the fertility of the soil, she uses jeevamrut which is a concoction of cow dung, cow urine, gram flour, and jaggery with water after letting it prepare for the same duration. She adds this to the soil once every two months. For the same purpose, she also prepared vermi-compost. Everything that Asha needs as manure, and to keep the pests away is available at home. Her expenditure on inputs then, is almost zero. “This type of farming may have low investment, but requires a lot more hard work and labour,” Jyoti adds.

Like most of the farmers in the village, Asha too depends on her tube well for irrigation, but with a variation. The economic survey 2018-19 claimed that 89% of groundwater extracted in the country is used for irrigation, and it further suggested that the focus should shift to irrigation water productivity from land productivity and thrust should be on micro-irrigation. Zero budget farming also calls for water-efficiency. Asha and team thus, have been practicing sprinkler and drip irrigation.

In her budget speech, Nirmala Sitharaman had gone ahead to say, “Steps such as this can help in doubling our farmers’ income in time for our 75th year of Independence.” While Asha’s land gives her a variety of organic produce, if it can really double a farmer’s income, or can be scaled-up are questions without an easy answer.

In the early years of the farm, a labourer had quit because he did not believe that the farm could grow without use of DAP and urea. Jyoti Awasthi, the Founder Director of Satat Sampada, a social enterprise to promote organic farming also noticed the same while working with farmers in Uttar Pradesh. “They were absolutely unsure about working without fertilizers, DAP and urea,” she says. “They have really lost the trust that agriculture can happen without these.”

The initial 2 years of gestation period, which is the time taken for a farmer to shift to zero-chemical farming and for their soil to be completely free of chemicals, is a challenging time. For these first two years, since the soil takes time to respond to the shift from chemical inputs to organic ones, the produce falls lower–sometimes as low as 40% of what the farmer was receiving with the conventional farming methods. Needless to say, many farmers drop out during this phase.

Asha began her organic farm as a hobby. For those who are dependent on agriculture for their livelihoods, the initial years of lower productivity, the risks of a pest attack and the high requirement of labor are costs that they simply cannot afford.

In Uttar Pradesh, when Awasthi showed farmers the chemical-free produce of her own 8 acres of demonstration plot, they looked at the quality of the soil and the grain and exclaimed, “This is so beautiful, ours is not as good.” Slow confidence building, and hand-holding through the process allowed for the adoption of change.

Since they eat what they grow, Awasthi saw that farmers were now beginning to understand the importance of family health, apart from the fact that chemical-free farming allowed for sustained fertility of the soil. When people around Asha started questioning the use of such a practice which is not bringing any profits, she showed them a different type of profit: nests built by birds in her orchard’s trees. Excited about the species of birds that visit her farm, she has also been conscious of the delicate inter linkages that exist in the agriculture ecology. Apart from shift to organic farming as a livelihood option, both Asha and farmers from UP have found a more personal resonation.

“Mera sona peetal ke daam par jaa raha hai (What is as valuable as gold is being sold at prices of brass),” Asha says. “The selling price of our products are higher, and they have very few takers in the village. It will sell in the cities, but we have not been able to figure out a transportation system for that. There is no market mechanism available.”

Awasthi decided to fill this gap. Her team created an e-commerce platform, Eat Right Basket, to sell organic cereals and vegetables that their network of farmers in Uttar Pradesh grows. “From the very beginning, we involve them in the prices of the produce, the transport system. This ensures that they are a part of the process.”

Even from a small village called Talbehat in Uttar Pradesh, farmers have signed contracts and vegetables are transported every day from Jhansi’s Railway Station to Nizammudin Railway Station in Delhi. “Unless there is a guarantee that their produce will be sold, there isn’t really any incentives to produce chemical-free vegetables.”  This is possibly one of the reasons as to why 1,63,034 farmers of the total cultivators in India are practicing Zero-budget farming, a proportion which is only about 0.1%.

Asha had helped her neighbour convert 1 kila of land into organic farming. Following that, they applied for organic certification by the government. But when no one came to test the soil for a long time, they did not know who to approach for further communication. Soon, they shifted back to their chemicals.

“No one in the village has much knowledge of the processes under organic farming, even the Sarpanch does not know.” Awasthi reinforces that even when the government has announced schemes for supporting this type of farming, it has not reached the grass-roots.

Asha has been an avid reader and learner, and has been using YouTube and news to update herself on processes of chemical-free farming. With that, in the past ten years, she has also been able to take benefits from the National Horticulture Mission. This government scheme provides financial assistance like setting up vermi-compost production units at 50% of the cost, and even got her subsidies on installing the drip irrigation system. Others in the area have not been made aware of such benefits.

For the purpose of knowledge sharing and keeping a check on each other, a few like-minded farmers from the region have created small groups. With about 5 organic farmers in one group, they visit each other’s fields to ensure that no chemicals are being used. They have occasional meetings and discussions, and hope to inspire more people to shift to chemical-free farming.

For a shift to take place, Awasthi believes that it is important to set a whole ecosystem for the shift. “Announcing schemes and budget allocations are only a part of the ecosystem,” she says. The rest of the ecosystem requires platforms to sell products, awareness of processes and trainings, constant hand holding, and support from the government in the face of risks.

However, with the government announcing schemes on the same, Awasthi has started observing something interesting—when it comes to organic farming, at least government officials are willing to support their initiatives. “When we have a conversation at the block level, or at the Krishi Vigyan Kendras, there is no longer a denial that organic farming gives results, since the government also has to now collect and produce data in this sector,” she says. “It has given us a high moral ground to work upon.”

But apart from that, the announcement for a shift seems to be a feel-good decision, but largely hollow, and scaling up of such initiatives it still doubtful. It will then be taken up by only a few like Asha, who initiate such shifts out of a love for the practice. “Duniye mei aye aur baag-bagiche na lagaye toh kya fayeda? (Coming into this world and not planting orchards and gardens, then what’s the point?)” she says. The rest, like her neighbours, may not adopt the practice with the same enthusiasm.

This piece is co-published by The Bastion and Mongabay-India

Vaishnavi works as an Environment Associate with The Bastion, and is interested in covering stories on forest and land rights, ecological restoration, governance of commons, and environmental justice.

In Her Opinion: Dr. Veena Srinivasan on the Rural and Urban Water crisis

Lessons from Another Disaster: Revisiting Kachchh Amidst COVID-19

Education In The Time Of COVID-19

What the Humanities Can Teach Us During a Pandemic

Education in Times of COVID: Re-centering Our Public Schools

Education in Times of COVID: A Distressed Batch of 2020 Still Hopes to Study Abroad

Children in Shelter Homes Need Support During the COVID-19 Lockdown

Out of the Woods: How the FRA Is Helping a Village in Maharashtra During the COVID Crisis

Of Race, Religion and a Pandemic: Understanding Islamophobia in Assam

Education in Times of COVID: The ‘Nook’ Model for Designing Your Own Learning

The Art of the New Wilderness

Education in Times of COVID: How Students, Teachers & Parents are Dealing With the Pandemic

Lessons from Another Disaster: Revisiting Kachchh Amidst COVID-19

May 4, 2020
Conservation and Development

The Shore Scene: The Heavy Toll of COVID-19 on India’s Fishers

May 5, 2020
Conservation and Development

Amidst Lockdown, Odisha’s Forest-Dependent Communities Have Their Hands Tied

Education in Times of COVID-19: Strengthening Mental Healthcare in Schools

No Place to Shine: What the Absence of the IPL Means for Unheralded Talent

May 27, 2020
Conservation and Development

Education in Times of COVID: Why Does It Take a National Lockdown to Revamp Our Education System?

Education in Times of COVID: How Corporation Schools in Chennai Are Bridging the E-Learning Gap

Learning Under Lockdown: Voices From Kashmir

Dialogues: Dr. Malini Bhattacharjee on the RSS, Seva, and Relief and Development

Of Syndemics and Stigma: Understanding COVID-19 Beyond the Pandemic

The Shore Scene: Locked Down In a Fishing Town

On June 18th, the Central government launched the

In the final part of this edition of #onthefence,

As Indian students continue to depend on ed-tech p

The Dibang Debacle: Hydropower and Altered Flow Regimes in the Dibang Basin

Behind the Trail of Chhattisgarh’s Coal Rush