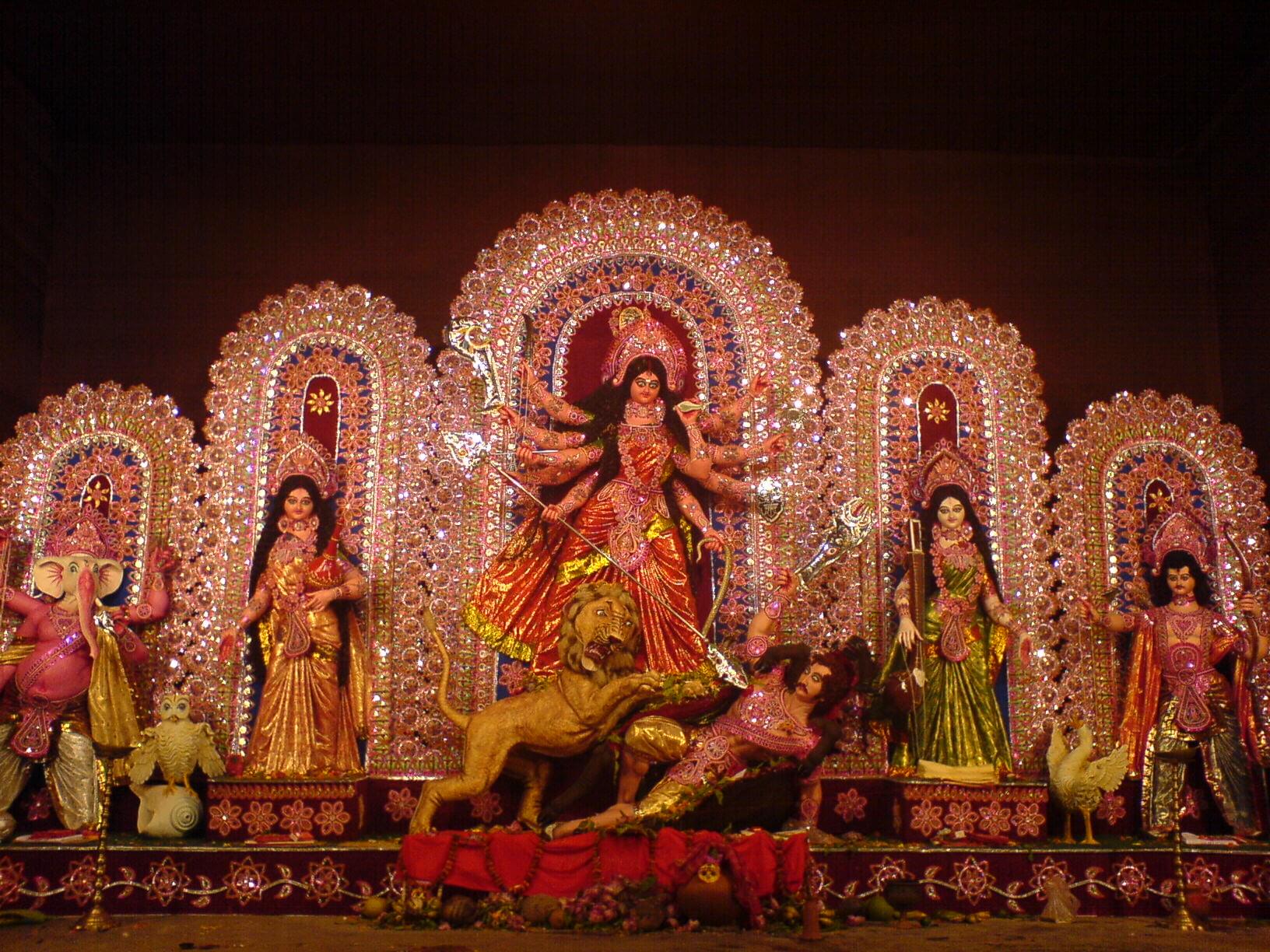 The sweeping, visual and sacred ways in which Indian religious festivals are celebrated make them prime platforms for catching the attention of different sections of India’s society. Be it brands, political parties, or NGOs, festivals are occasions that have a mass appeal, and a positively pious one at that too. Seen in this light, the Durga Puja celebrations have presented a ripe site for sustainability to take centre-stage amidst the thousands that gather around pandals and food stalls. Since West Bengal has allowed festivities to take place in October as long as COVID-19 protocols are followed, the Durga Puja festival could go on to play a pivotal part in catalysing the Green City Mission in Kolkata and other cities in the state.

Of Pandal Décor and Puja Idols

In comparison to forms of activism such as bandhs or protests that may cater to the demands of only a certain section of society and individuals, festivals have been found to present peaceful fora for raising awareness. The Durga Puja festival is symbolic to more than just the state of Bengal, extending to other eastern states like Odisha, Tripura, Bihar and Assam by virtue of its cosmopolitan nature. Where generations come together, environment-friendly themes at pujas can set the tone for conversations on sustainable practices between children, parents, and grandparents.

In Kolkata, Durga Puja associations are known to explore diverse themes; pandal decor is known to adopt contemporary social issues as themes. For example, the Labony Housing Estate’s Durga Puja used eco-friendly materials like cane and jute, as shown below, for making the Puja pandal. In Lake Town, the Adhibasi Brindo Durga Puja thematized plant life in the age of global warming. Such themes concerning sustainable development definitely carry a great impact on the crowd’s mind, given the sanctity of the occasion.

To ensure that environment-friendly practices are followed, the West Bengal Pollution Control Board placed certain guidelines for Puja associations to comply with. These include banning the use of plaster of paris for idol-making and encouraging the use of green paints instead of those that contain mercury and other lead-based chemicals in idol-making hubs like Kumartuli, in North Kolkata.

Initially known as Coomartolly or ‘potter’s quarters’ under British rule, Kumartuli is home to second and third-generation potters and artisans who have continued the art and trade of idol-making. They have been using eco-friendly materials like traditional clay, coconut shells, and coir ropes as an alternative to toxic materials like plaster of paris and burnt clay, which are contaminating and not water-soluble. Plastic is often used for decking idols, which is also a polluting factor for the city’s lakes and ponds. Replacing plastic with eco-friendly materials like jute or organic cotton sarees for the idols’ costume presents sustainability as a fashion statement for all.

The Serader Sera Nirmal Pujo Puroskar is an award that gives recognition to those pujas that promote and also follow environment-friendly practices. It is organized by the Environmental Governed Integrated Organization, a non-profit, along with Calcutta University and other governmental and non-governmental agencies.

“Every year, the Senhati pond nearby was being used to immerse idols by the Senhati Colony Durga Puja and other Pujas in the locality,” says Archana Banerjee, a member of the Senhati Durgotsab Committee. “This was contaminating the pond water, so to prevent it from becoming more toxic, we decided to end [this practice] and use Babughat [one of the main immersion spots in Kolkata] instead, as the spot for idol immersion,” she adds.

We chose Babughat since KMC, Kolkata Police and Kolkata Port Trust volunteers are deployed at the spot to ensure and monitor a smooth immersion process and then help lift and remove remnants of the immersed idols from the river water.

This joint initiative between the KMC, Kolkata Police and Kolkata Port Trust is part of the National Mission for Clean Ganga. West Bengal’s Environment Ministry has also set up air quality monitoring stations to measure the levels of air pollution during Puja season. Such collaborations by governmental and non-governmental agencies are steps in the right direction, but Kolkata’s sustainability drive comes down to involving citizens in it all, which is something that the private sector has had some fortune with.

The Durga Puja festival is a gaudy affair and requires heavy sponsorship, which is exactly where the corporate sector comes in. Private sector organizations are known to actively pursue their Corporate Social Responsibility (CSR) initiatives during Durga Puja festivities; private players have been successful in generating mass awareness via ad and award campaigns following sustainability-related themes.

Greenply’s #PujoForAll initiative focused on making ramps made of eco-friendly plywood for making puja pandals wheelchair-friendly. JSW Cement has promoted and rewarded Puja committees that have been contributing towards social causes such as fighting against dengue, water conservation, cleanliness drives and so on. Such CSR initiatives have played an instrumental role in raising awareness.

Calcutta Electric Supply Corporation’s True Spirit of Puja award focuses on assessing Puja pandals based on three parameters: civic consciousness, safety measures and social commitments. Given the Covid-19 situation, a primary parameter in the judgement obviously accounted for how well the Puja Committee followed COVID-19 protocols. “In 2020, we prioritized keeping open spaces in and around the Puja premises… people carried flowers and whole fruits [instead of sliced pieces] from their own homes as Puja offering. Those without masks were not allowed into the premises,” said Mrs Sudakshina Sen, the Joint-Secretary of the Senhati Durgotsab Committee, whose Puja was a recipient of CESC’s award.

Streets of Food and Theatre

Kolkata is a melting pot of cuisines, and Durga Puja festivities present a unique street culinary experience to revellers. However, food sales from street vendors is directly related to the wastage of food, with half-eaten and surplus food ultimately finding its way to Kolkata’s landfills. The Kolkata Municipal Corporation has reported that the city generates about 4000 MT of waste daily, a figure which is set to spike during Puja season. Placing sufficient garbage bins, and incentivizing vendors to adopt bamboo and birchwood plates instead of plastic or thermocol ones will reduce the wastage of an enthusiastic Puja crowd.

Since noise, land, water, and air pollution levels typically peak during Kolkata’s Durga Puja season, associations have taken up the onus of keeping their Puja premises clean. “On Dashami (known as Dussehra in other parts of India), we try to use herbal vermillion during Sindur Khela (or ‘vermillion game’, a custom where women smear vermillion on one another to celebrate the last day of Durga Puja) every year,” says Mrs Shampa Dutta, an ex-Secretary of the Utsa Ladies Club and Cultural Programme Member of AB Block Abasik Sangha, Salt Lake. The Sangha hands out potted plants to NGO beneficiaries who are invited as a part of the Puja inauguration ceremony, so as to raise awareness on the need for keeping localities clean and green.

Just as its different cuisines, Kolkata’s theatre circuit can be counted as a pillar of Bengali tradition and culture. Street plays in Kolkata hold sway over local public discourse, and are known to have portrayed societal issues like gender inequality or discrimination.

Digital platforms like MahaUtsav Online provided live coverage of puja rituals like online pushpanjali (the offering of flowers), and allowing followers to partake in online darshan (seeing). It was launched in 2019 with the primary aim of enabling the Indian diaspora to virtually participate in Durga Puja festivities. This initiative remains sponsored by Berger Paints, a company that is vocal about its eco-friendly products and sustainable business practices. Since West Bengal’s updated COVID-19 protocols continue to place a ban on cultural programs in and around Puja premises, platforms like MahaUtsav Online can serve as an effective medium for hosting short skits that could address the need for sustainable approaches to living, while also contributing to the rich cultural heritage of Puja festivities.

The Power of Symbolism in Cultural Phenomena

With organizers striving to make bigger pandals to accommodate revellers, there are inordinate demands for electricity, and large sums of money being dished out for opulent pandal décor. Be it a Diwali sans firecrackers, Holi with organic colours, or Durga Puja with biodegradable pandals, one cannot underplay the power that a festival possesses as a platform to hold audiences that most forms of messaging cannot capture. Durga Puja, like all other religious festivals in India, carries immense mass appeal, bringing people from different walks of life and parts of the country together in celebration.

COVID-19 restrictions mean that Puja celebrations now have to be held at a “small but beautiful” scale, as Chief Minister Mamata Banerjee puts it. One can hope that Puja can serve as a platform to catalyse the public’s involvement in adopting Kolkata’s mission towards becoming a more sustainable, clean and green city.

Mental Health in an Age of Productivity: The Collective Cost of Our Activism

Abortions, the Woman’s Body, and the Disciplinary Power of the State

Cast Away: A Case For Place-based Education in the Andaman and Nicobar Islands