The Ken-Betwa interlinking project is the first in an ambitious 30 river interlinking projects that the government has planned in the decades to come. The project will facilitate export of water from the Ken river to the Betwa basin, to provide for the drought-prone region of Bundelkhand. Expert opinion on the matter differs sharply. The submersion of part of the Panna tiger reserve is one of the pressing problems the government must address if the project is to be viable. In an exclusive interview with The Bastion, environmentalist and Coordinator for the South Asia Network of Dams, Rivers and People (SANDRP), Himanshu Thakkar explains the truth of the interlinking project and points to the extent of government negligence in the matter. 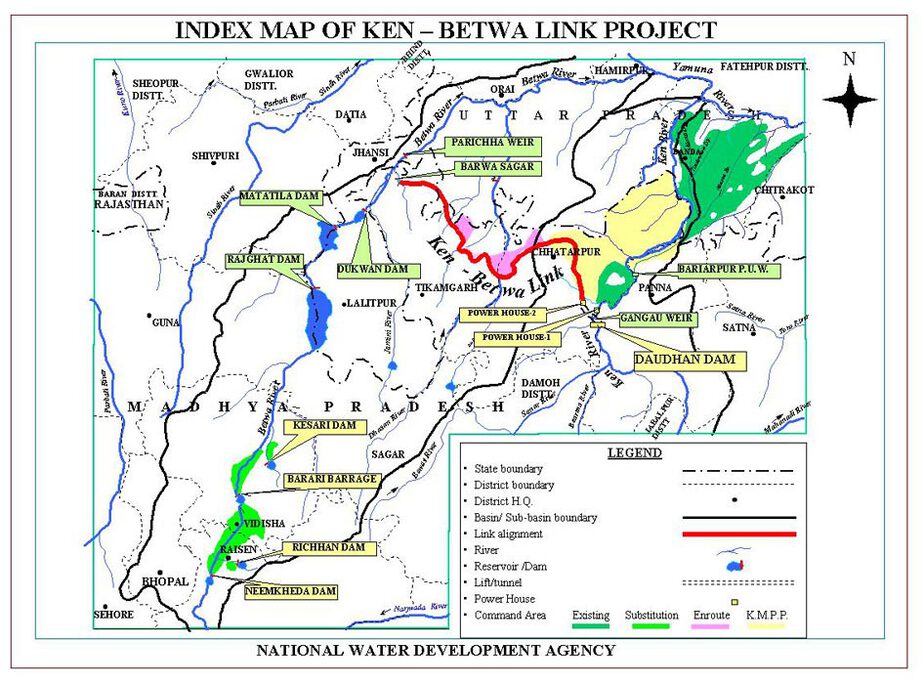 The Ministry of Water Resources states that the interlinking project aims to irrigate 6000 square kilometres in UP and MP, provide drinking water to 13 lac people and produce 78 MW of power. The incidental benefits accrued from the project are also said to be of immense value to the people of the area, like increased groundwater due to increased use of surface water for irrigation. Other benefits include afforestation along the canal banks, marketing opportunities, tourism, and employment opportunities during the building period, rural development, and the creation of bird sanctuaries. The stated annual benefit to cost ratio is 1.87 and the project boasts of a 13% internal rate of return.

The official reports acknowledge that there are incidental costs that can adversely affect the locals and the environment. They say that “with careful planning, adverse effects can be minimised and mitigated, and secondary beneficial effects enhanced.” Yet, looking at the project details, it is far from clear how they plan to do so.

According to a report by SANDRP, the interlinking would see close to 30% of the land being submerged

Effectively, only 390 of the 560 square kilometres will be available to wildlife in the national park, and the reserve’s buffer zone will be affected. The breeding sites for tigers will also be submerged. Moreover, it will require 6000 people over a period of 12 years to actualise the project. After the disaster where Panna lost its entire tiger population by 2009 due to poaching activities (forest authorities knew all about this), their newly revived numbers will dwindle once again due to the interlinking project.

The ministry, however, says otherwise. It was reported saying, “The project will, in fact, make green the denuded forests of the Panna reserve and create fresh water reservoirs and attract herbivores which would serve as prey for tigers. Moreover, only one tiger and her cubs roam the region of the reserve that will be inundated and it will not face obstacles in its territory.”

This statement, however, is factually incorrect. SANDRP’s report unequivocally states the EIA’s lack of knowledge owing to their claims that the reservoir will provide drinking water and prevent encroachment; the EIA reports also fail to provide an explanation of how this will be made possible. The wildlife department has records showing 50% of the breeding tigresses of Panna presently reside in the submergence area. Four tigers have also been reported to use this corridor for dispersal. The core critical habitat of the reserve will be totally bifurcated. This spells trouble for the tiger population.

The report talks about developing fisheries in the Daudhan reservoir, without understanding that the area falls under the jurisdiction of the forest department and the tiger reserve; these activities are illegal in that area. It also makes unwarranted assumptions, such as tracing the reason for the migration of monkeys from Panna Park to the Daudhan dam due to the drying up of leaves in the forest.

And this is not all. At the heart of the entire project, lies the assumption that the Ken River has surplus water that can be diverted. A report jointly submitted by Himanshu Thakkar and Bipin Chandra Chaturvedi in 2005 claim that the National Water Development Agency’s (NDWA) portrayal of Ken as water-rich is wrong. Thakkar notes, “We looked at the feasibility study in detail and what we found is that the whole exercise is trying to establish that Ken has surplus and Betwa has deficient is an exercise in manipulation. They manipulated how much area was cultivable, they manipulated how much area is irrigable, they manipulated how much water is required per hectare of land…In fact, the rainfall is similar. When Ken is in flood, most years, Betwa is also in floods. When Ken is facing drought, most years even the Betwa is facing a drought. So there is no real surplus in that sense.” Here’s what he said:

It is imperative to note that the tiger population is not the only vulnerable species as a consequence of this project. Aquatic fauna such as the river dolphins, gharial and fish will be affected due to the silting of the water sources. The National Tiger Conservation Authority (NTCA) submitted a report in 2014 stating that the submergence of Gehrighaat area would irreparably damage tiger and vulture habitat. The vulture population across the subcontinent fell drastically in the past three decades, and the Panna Tiger Reserve is one of the few places they have reappeared in recent times. Other species affected include Sangai, a species endemic to Manipur; the Slow Loris from the northeast; the Slender Loris from South India; the Philippine Pangolin and the Brown Palm Civet, endemic to the wet forests of South India. The preservation of the tiger reserve is crucial for the protection of these species.

Erstwhile Forest Secretary of India, MK Ranjitsinh stated that there was suppression of facts and incomplete impact assessment. The public hearing and the appraisal committee’s approval was also inadequate at best, subversion of truth at the worst. Thakkar notes:

“The whole public hearing exercise is a sham. The people who came to hear were not even allowed to speak. In five of the districts where the project is going to have an impact, there has been no public hearing. The issues raised by the public are not being answered properly. And the next step is appraisal…Again, that was a complete sham and the earlier EAC actually, refused to clear it. They changed the whole EAC. The expert appraisal committee was reconstituted and the new EAC in its very first meeting in December 2016 cleared the project.”

Yet, the experts fear that the project will push forward regardless of the concerns at hand. Thakkar highlights the keenness with which the government has approached this project: “At the State Wildlife Board, at the very first meeting, all the independent members opposed it. In the next meeting, the chief minister actually tore down all the objections that were being submitted in writings…and cleared the project.”

In the recently published 3-year action agenda plan, the project is stated to move on to implementation since the Detail Project Reports (DPR) for Phase I and II have been completed. In a meeting with the Chief Minister on the matter in 2015, the board members had, along with three other alternatives, suggested passing the resolution since it was an MP wildlife advisory board. Thakkar recounts his meeting with the Secretary of Ministry of Water Resources, who laid bare the reason the government is so keen on seeing the project through:

“…The reason the project is being pushed is that it is a 30,000 crore proposition. When you spend this kind of money, 90% of it is going to come from the Centre, there is a huge issue of corruption, and kickbacks and so on. There is a whole lobby for such massive infrastructure projects. But it has no real justification or basis. The project should not go ahead at all. It will not even benefit Bundelkhand. It will, in fact, take water from Bundelkhand outside.”

Current Water Resources Minister Uma Bharti went to the extent of threatening the media and regulators, saying that “anyone opposed to the project is committing a national crime.” Cognizant of the many problems that plague the project as it stands, one is hard-pressed to see how it is issued in anyone’s interest, let alone national interest. While rhetoric and promises may fuel the imagination, it will be short-lived salvation. The cracks and flaws are blatantly obvious, and one can argue that doing nothing about it is the real national crime.