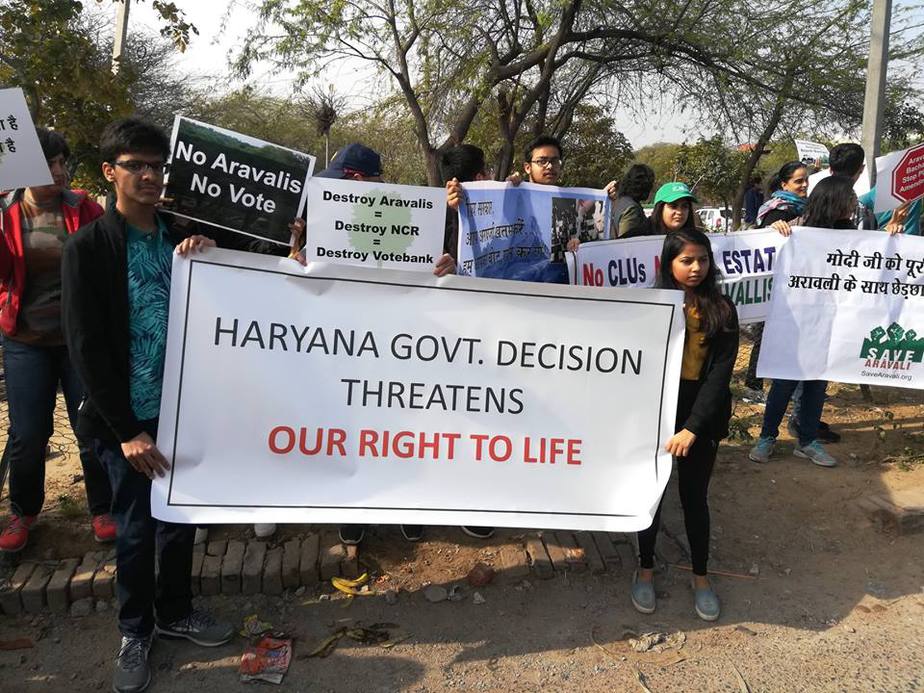 We were riding in an auto at around 8.30 am. In a journey of about 20 minutes, the screen of my phone, my clothes, my notebook, all had a thin layer of dust on it. We were on our way to the village Pali, close to Faridabad, Haryana, a journey that requires change in medium of transport, from metro to auto to a walk. Soon, the road became narrower, and kikar trees emerged larger in number. The undulating landforms that run along the road caught my eye: the 3 billion year old Aravallis.

We enter Pali to realise it’s a large village. The 2011 census informs us that almost 8000 people reside here. Almost two-thirds of the land here is mountainous, and just about one-fourth is available for growing crops, chiefly wheat, bajra and jowar. Adjacent to every village in a forest on the Aravallis, that is known as a bani locally. “Many of the banis that have remained pristine because of the  faith and divinity that it attached to it,” explains Ravinder, who is a government school teacher in Pali. “Even Pali bani had a strong faith,” adds Bhagender, an advocate. “We had a belief that if any person cut even a branch from the forest,  they would face years of misfortune. Now things have changed.” Both Ravinder and Bhagender are also associated with the Save Aravallis Trust.

A few kilometres within the bani, on the top of the hill, a 30 acre garbage disposal site was proposed in September by the Principal Secretary to Government of Haryana. The municipal waste of the cities of Gurgaon and Faridabad will be dumped here in this common land, also known as shamlat deh.

ALSO READ: “It Has Become Acid”: The Aravallis Battle Against Garbage Disposal and More

But this is not the first time that such a development has occurred in Pali. Jitender Bhadana, also with the Save Aravallis Trust, in his emotional appeal in a mahapanchayat  earlier in October said,

“Have we done some sins that all things that the cities don’t want, come to us? Pali has become such a popular site for rejections that officials even in their sleep blindly point towards Pali.”

He was referring to not just the latest waste disposal site, but also the stone crushing zone and a hazardous bio-medical waste plant that made their way to the village boundaries in 1992 and 1995, respectively.

Why does the village Pali end up being the lap of all such unwanted developments? The answer, interestingly, lies in the complicated story of land acquisition of the  village.

Pali village is located just across the border of the municipality limits of Faridabad. This means that any development that made its way into the municipality never crept into the village, keeping it ‘andekha’, or ignored, as Bhagender puts it. But this was to change when a crusher zone had to be allotted in Pali in 1992. The Municipality of Faridabad then bought Pali under its wing, and through the Punjab Village Common Land Act legally took control of all common lands of the village. Then, they created the crusher zone near Bhagender’s village, which lies on the foothills of the Aravallis. Soon after, they took the village out of its limits, again.

So today, the shamlat deh is legally with the Municipality, but while entering the village you would be welcomed by a huge board across the road that says “Welcome to Pali Panchayat”. “Sar lag, aur dhad alag karke rakhdia (they have separated the head and the body),” Rakesh, who teaches Yoga to young children, says in disappointment. No compensation was paid to the village Panchayat, and the municipality has washed its hands off any responsibility to the village.

In the same year, Pali village filed a writ against this land grabbing. Today, it is still pending, along with 91 other writs of similar nature. The one case that did see the light of the day was ‘Suraj Bhan and other versus State of Haryana and another’ where the High Court of Haryana and Punjab ruled in an interim order — in July 2016 — that if rights of common lands vest in a Municipal Corporation, acquisition without payment of compensation would be impermissible in law, thus illegal and invalid.

But since this case of Pali has still not been discussed in Court, the shamlat currently is a strange hybrid of land use. While the villagers with their historic use of the forests still use it for grazing without having legal rights to its use, for the municipality it is a free piece of land, available for assigning crusher zones and garbage waste disposal sites. In fact, in the case mentioned above, the legal counsel also mentioned that “the concept of Shamlat deh is absolutely foreign and alien in the context of an urban or a town area,” and “with such lands vesting in Municipality or a Municipal Corporation they assume the characteristics of a town or urban area, with no connection for use and enjoyment for the inhabitants of the village.” This is precisely what Pali faces today.

There is also an added threat. Many areas in the Aravallis are protected under the Punjab Land Preservation Act (PLPA), a hundred year old Act which had disallowed human activity that could affect the availability of sub-surface water, alter the landscape, lead to biodiversity loss and other unpredictable consequences. Earlier this year, the Haryana Legislative Assembly passed an Amendment to the Act, which would put almost 30,000 hectares of land in the Aravallis to threat by opening it for mining and construction. Rakesh says,

“The municipalities don’t act like governments. They work like agencies. Kale angrez hi maan lo! (think of them as darker versions of the British).”

Ravinder points to a newspaper which is breaking the news of a 1400km “green wall” along the Aravallis to shield and protect the region. “We already, naturally have this green wall. Why aren’t there efforts to preserve this?”

As Rakesh and Ravinder drop us to the closest auto available, Rakesh wants to know where Sumit, my colleague and I belong to. When Sumit tells him of his district in Uttarakhand, Rakesh sways his head imagining the beauty of the hill state. Over the course of the day he had made the comparison of the bani, its waterfalls in his childhood memories as beautiful as those in Uttarakahand. “Arey bhai,” he tells Sumit. “Take us there with you!. “If things continue the way they are, we’ll just have to think of a mass migration from Pali.”