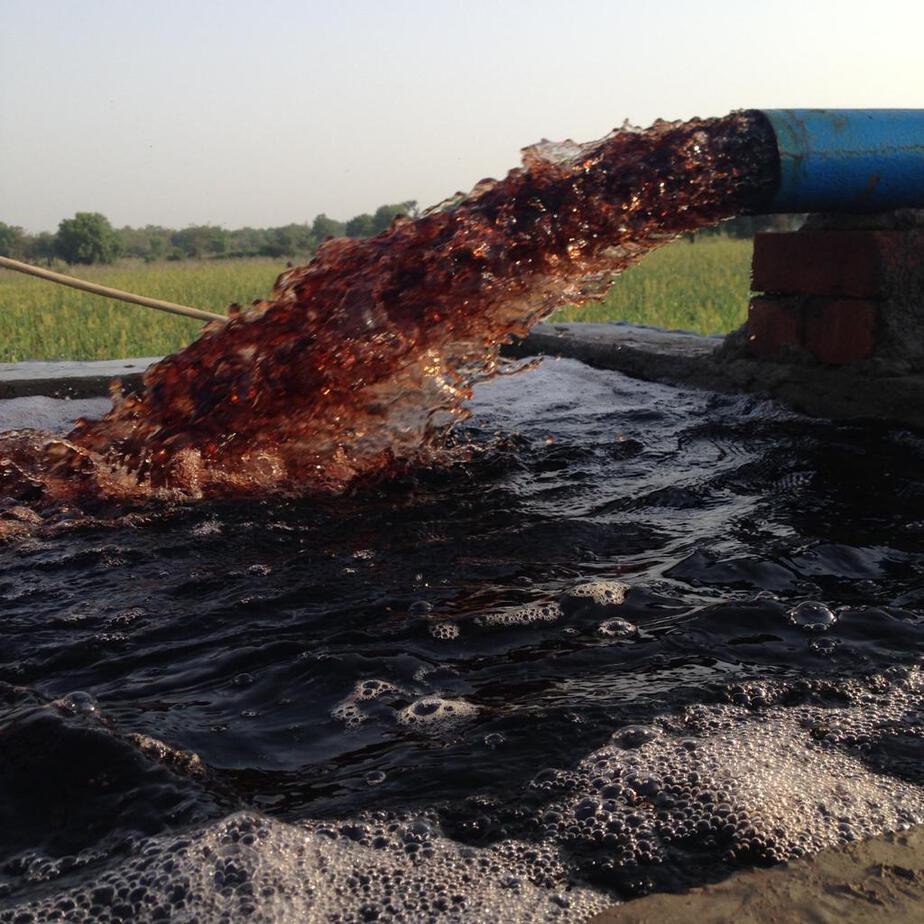 The village of Luna is like any other village in Gujarat — vast stretches of green, mud and brick houses pockmarked around the fields, an unforgiving sun under the bright blue sky. Cows and goats roam the fields. Days are long and evenings are warm. Nothing stands out. One would easily forget about the small community that lives there, had it not been for the reddish-orange water from borewells they have no choice but to utilise.

On 22nd May, environmentalist Rohit Prajapati and members of the Farmers Action Group (FAG) visited the Effluent Channel Project (ECP) of Vadodara in Gujarat. They were accompanied by representatives of the Vadodara Enviro Channel Ltd. (VECL). The task was to prove the claims made by Mr Prajapati and team in the letters they sent to the Gujarat Pollution Control Board (GPCB), namely, that the effluent pipes put along the ECP are leaking into the soil. After over three hours of walking up and down the pipeline that stretches from Luna to Dudhwada, they found several locations where the pipes were leaking, and the effluent was seeping into the soil, contaminating the groundwater.

“The water in our wells is red. Everyone uses this polluted water because we don’t have a choice,” says Ghanshyam Patel, a farmer and activist from Luna. He was one of the first people to complain about the rising pollution levels in their groundwater, which is essential for daily activities. Along with Prajapati, he is trying to get the authorities to reprimand the various industries that release untreated effluent into water sources and secure compensation for the farmers whose health and crop yield has been steadily deteriorating.

The problem first came to light in 1999, when some reddish water was spotted in a well in Luna. An investigation by the Indian People’s Tribunal (IPT) showed massive pollution along the ‘Golden Corridor of Gujarat’ – from Vapi to Vadodara. This is not a singular instance of groundwater contamination. The city of Ankleshwar, a prime industrial hub of the state, has long suffered from polluted groundwater due to toxic effluents released by various industries in the region. This is the flipside to Gujarat’s national image as a successful industrial state.

In 2004, the Supreme Court Monitoring Committee prepared a report, wherein it ‘strongly recommended’ detoxification of the groundwater in Luna, and to provide alternate sources of water to the afflicted people. Based on that, the Supreme Court, in Writ Petition (Civil) No. 695 of 1995 Order, on 27 May 2004, acknowledged that due to ‘indiscriminate dumping of hazardous waste’ due to ‘negligent or non-existent practices together with lack of enforcement by authorities’, the groundwater has been damaged. It directed the state government to provide adequate alternatives for water sources (tankers etc.) for those afflicted.

In 2004, the Supreme Court Monitoring Committee prepared a report, wherein it ‘strongly recommended’ detoxification of the groundwater in Luna, and to provide alternate sources of water to the afflicted people. Based on that, the Supreme Court, in Writ Petition (Civil) No. 695 of 1995 Order, on 27 May 2004, acknowledged that due to ‘indiscriminate dumping of hazardous waste’ due to ‘negligent or non-existent practices together with lack of enforcement by authorities’, the groundwater has been damaged. It directed the state government to provide adequate alternatives for water sources (tankers etc.) for those afflicted.

The Supreme Court Directive did little to change things on the ground. In April 2008, the Central Pollution Control Board (CPCB) wrote a report highlighting the grim situation due to industrial pollution in the area. In 2011, the Gujarat Pollution Control Board (GCPB) found that all 33 of the examined bore wells were contaminated and had coloured water. In September of the same year, the Institute of Seismological Research of the Government of Gujarat submitted a report that explained the extent of damage to groundwater due to industrial pollution in Luna village. They pointed out that the waste sites that belong to Baroda Textile Effects Pvt. Ltd. are poorly managed. The waste disposal tanks are cracked and the waste burial sites are over-spilling with untreated waste.

Since 2012, farmers like Mr Patel, along with members of the FAG, have been trying to get the authorities to act and remedy the situation. However, the authorities have not taken any concrete measures so far. “Every few months they come and take samples,” says Mr Patel. “They know what is going on, but they don’t care. They’re just waiting for us to get tired so they can shut the file on us.”

A survey conducted by Mr Prajapati and his team in 2018 revealed that the Chemical Oxygen Demand (COD) levels in the water in Luna are far higher than the acceptable effluent concentration limit of 250 milligrams/litre (mg/l). On the 16th of October 2018, it was 2225mg/l and on the 26th of December 2018 it was 2722mg/l; ideally, for groundwater, these levels should be nil. The survey threw up several scary metrics — see the graph below — for other determinators (Total Dissolved Solids and Biological Oxygen Demand) that show just how critical the situation is.

Mr Milan Patel, a farmer in Luna, said that due to the water crisis in his village, they have no option but to use it for irrigation purposes. His borewell got contaminated in 2013. “The water we use has reduced the crop output over the years, but we have no option but to keep using it,” he says. The water is also used for bathing and washing clothes, despite the health hazards it can potentially carry.

“There is another well in the village that has clean water,” says the sarpanch of the village, Mr Bhupendra Patel. “We drink water from that well, but our livestock has to drink the polluted water. We’re afraid of the diseases it can cause in them.”

The role of the pollution board in this entire situation is also causing irritation for those on the ground. “GPCB is not disclosing facts on the ground,” says Mr Prajapati. “They are either unable to implement, or not ready to implement environment law…which prima facie raises fundamental questions about the political manoeuvring by the powerful polluting industries and the ‘committed’ government of Gujarat and India.”

A report compiled by the Paryavaran Surakhsha Samiti (PSS) was sent to several authorities, including the Prime Minister’s Office (PMO), the Chief Minister of Gujarat, the Chairman of both, the CPCB and the GPCB, and the collector of Vadodara, which highlighted the plight of the groundwater and the resulting consequences that the farmers have had to face. It was met with a reply by the GPCB on the 29th of April 2019, which all but ignored the main facets of the report and claimed to be monitoring and supervising polluting activities, which, in effect, it has not.

Upon demanding that the sites be checked in person, Mr Prajapati and his team were assisted by members of the VECL on the 22nd of May, only to be told that they were there merely to observe the pipe leakage. VECL did not have access to dig underneath to find evidence of seepage into the soil and groundwater.

The latest report, submitted by the FAG on the 23rd of May, 2019 states that VECL initially dismissed their claim upon seeing the wet patches of soil along the pipeline. They claimed it was wet due to nearby construction work, and due to people washing their clothes. Mr Prajapati and his team then pointed out to several other spots along the ECP that were wet. Yet, according to the report, VECL would not be convinced because unless they dug into the ground to observe the leakage, it could not be definitively proven. And since the VECL was strictly under orders to just ‘observe’, the entire expedition turned into, what the report calls, ‘a cynical joke’.

“My neighbour recently passed away due to throat cancer,” says Mr Patel. “His bore well is contaminated. In my village, people think cancer is caused by your karm (fate), so they believe it was justified.”

With an inactive government and fast increasing pollution levels, the lives of the farmers at Luna village look anything but pleasant. The effluent generating industries are still polluting the water, and no corrective actions have been taken to ensure the farmers’ wellbeing. Wondering whose interest the government really serves, Mr Prajapati says cynically, “What role are they playing? Are they the Gujarat Pollution Control Board, or the Gujarat Population Control Board?”