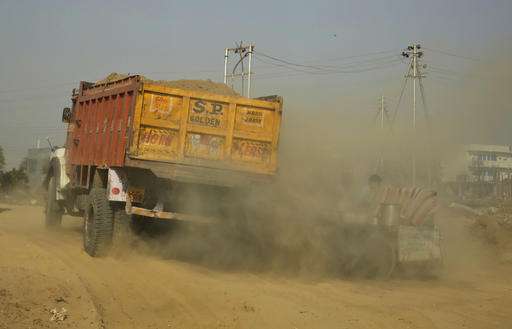 India’s trucking industry relies on heavy-freight trucks for 65% of its activity. While they are the most efficient at transporting cargo, these 15-tonne trucks consume half the total oil within the entire transport sector – 17 million barrels per day. This is the same amount of fuel produced by the USA and Canada combined. Heavy freight trucks come in second for oil consumption, behind passenger cars. These diesel reliant vehicles are responsible for 35% of all transport-related carbon dioxide emissions and 7% of total emissions across industries! The staggering environmental effects from such a vital cog in the economy has prompted discussion regarding reform within the sector.

Traditional solutions to this problem come in the form of direct changes, which include reducing the number of trucks consuming energy by increasing their size, or linking them together so more vehicles can run together on less fuel. Both of these, however, pose their own safety concerns. High capacity vehicles run the risk of damaging roads, and platooning (linking more than two trucks in a convoy) increases the possibility of road accidents. Systemic changes can exist within the many phases of a heavy freight vehicle, from its production to how it travels and the system within which it travels.

The investment in low carbon technology calls for diversification of the energy supply, for which research and development into multiple alternative fuel sources are underway. Natural gas in the form of Compressed Natural Gas (CNG) for smaller vehicles, and Liquefied Natural Gas (LNG) for heavier vehicles (with higher annual mileage) is the most prominent fuel, largely for its relatively less carcinogenic and quieter emissions than diesel. However, while refuelling takes around the same time as diesel, it requires specialized and complex equipment for the process.

A more efficient option is biofuel, which has high energy density and is more compatible with existing vehicular technology. Biofuels can be created from several sources – from crop oil, biodiesel, feed stocks and animal fat wastes (requires some amount of mechanical modification), to hydro-treated vegetable oil (comes from a similar process but can be used in unmodified vehicles) and biomethane (extracted from the raw biogas produced by the anaerobic digestion of organic matter).

There also exists the possibility of a departure from the need for combustible fuel; electric trucks are a stellar example. Just like electric cars, this method is largely suited to smaller vehicles and can be used mainly for intra-city deliveries. However, adapting the use of electric energy to longer distances poses serious infrastructural barriers because for this, Electric Road Systems must be set up; these involve the installment of inductive energy supply along roads. While the U.S., Germany, and Sweden are currently running pilots of such programs, the cost for this is extremely high ($1 million per lane-kilometer) and thus, it is unlikely to become a widely used system in the near future. Hydrogen batteries are another option, but while they are extremely environmentally friendly, they also take up four times the space that traditional diesel systems do and require complex refueling processes.

Thus, born out of the conflict between the need to revolutionize an inefficient system and its complete reliance on fuel, a number of interesting methods have emerged from both industry and policymakers. Many of these suggestions involve cooperation in the form of data collection and sharing, while others aim to introduce systemic changes in how we look at transport and travel itself.

Innovation in Other Phases of Freight Transport

One approach to the environmental problem is given by UPS (a logistics and transport company in the US) which is a program of route optimization called ORION (On-Road Integrated Optimization and Navigation). This combines telematics with data about the cargo being carried and user preferences, along with the nature and terrain of possible routes to create a system that can inform both, the vehicle and driver of the most efficient route (that would damage the package least) while catering to customer requirements as much as possible. Having been tested between 2010 and 2012, during which time it reflected a 3 million gallon reduction in fuel consumption, the system has now been instated across multiple locations. While there is an inevitable adjustment period during which drivers’ feedback is used to fine-tune the system in order to make it sensitive to discrepancies and the logic of drivers, today it saves UPS 100 million miles and 10 million gallons of fuel per year.

Another interesting reform of transport norms includes the attempt to change the timings of deliveries in urban spaces. This experiment was successfully tried in New York, Bogota and Sao Paulo – where it reduced carbon emissions by 45-67%. Major European institutions have taken it forward, and the POLIS program, for one, aims to bring together the concerns of multiple stakeholders to create a program for off-peak hour deliveries. Similarly, the PIEK program in the Netherlands also developed a set of measurement standards, low-noise practices, and equipment for the same. However, problems of the noise of transport at irregular times, the quality or condition of the delivered product, and the necessitating of customers to adjust to new delivery times still need to be worked around.

More than 40% of trucks that make deliveries today return empty, which is a clear indicator of the significant wasted capacity of the system. To optimize utilization, resource sharing is another way some organizations are attempting to reduce their footprint. Projects like iCargo enable stakeholders to share databases and cooperate across logistical chains. They have a simple operating system, that coordinates deliveries based on user preferences and supplier capabilities. This slowly builds the system into an entire marketplace that offers users multiple delivery options that coordinate vehicles on intersecting routes to get the package to its buyer. The market for similar Digital Freight Matching startups has also begun to boom, with companies designing real-time platforms to coordinate between sellers and transport companies to allow faster and more efficient deliveries. Additionally, countries in the European Union and East Asia have adopted co-modality, a means of transporting goods using public transport. This has been shown to reduce empty movements and overlapping routes. Additionally, systems could be built that synchronize the use of rail, road, shipping and air transport to allow for each vehicle to serve the purpose it is most suited to. This applies to cases where air, shipping and rail are used for the long haul and roads for the first and last mile. To build a genuinely useful, productive environment that fosters cooperation, however, a collaborative system must be trustworthy, straightforward and universally accessible.

Governments also have an active role to play in this campaign; they can ensure that emissions remain low by imposing a differential tax, which would require owners of vehicles that consume more fuel to pay more tax and thereby discourage the use of less environmentally friendly transport. The revenue from this could be invested in upgrading older technology to make it more efficient, as well as in research and the development of new low-carbon alternatives to fuels and hybrid vehicle systems. However, taxation alone is an insufficient solution – generation of funds cannot make an impact without their proper utilization.

Thus, while the reconstruction of the current freight system is absolutely necessary to cut down its huge environmental impact, much of the proposed infrastructure and technology currently available is extremely expensive and largely only accessible to developed countries. To mitigate this, policymakers with smaller resource pools must rely on the support of industrial collaborations as well as differential taxation to generate funds for both the adaptation of the system, as well as research into reducing the costs of available methodology.