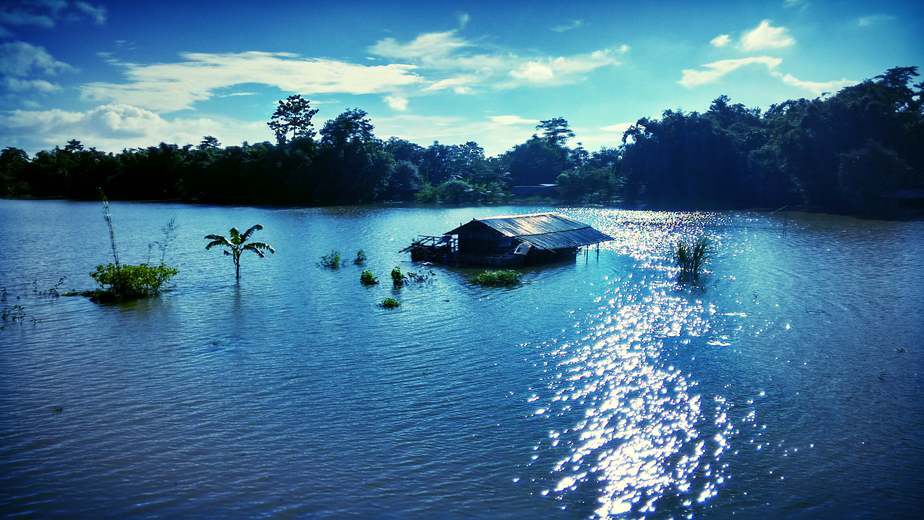 July 17th 2019 came with a mixed bag of developments for the Northeast; the escalating waters of river Brahmaputra reached 30.36 metres at Dhubri, Assam catching up to its own Highest Flood Level record of August 28, 1988 (figure below). It was also the day when the Cabinet Committee on Economic Affairs (CCEA) gave a green signal to India’s largest hydro-electric project (HEP)—2,800MW Dibang HEP, in Arunachal Pradesh. “The HEP is envisaged as a storage-based hydroelectric project with flood moderation as the key objective…” the government said, as it now sets to deforest approximately 4000 hectares of pristine forests—forests, which would have prevented water from quick run-off and erosion, preventing floods in the first place.

“This step is an invitation to floods,” remarks Himanshu Thakkar, coordinator of South Asia Network on Dams, Rivers and People (SANDRP). “Every single tree would have harvested and conserved water.” A decision like this reflects misplaced priorities: two words that seem to be at the core of mismanagement of flood prevention in the Brahmaputra River.

The geological and meteorological conditions of the valley make floods a common phenomenon. The Brahmaputra valley pans over a width of 80km, of which the river itself occupies a small 6-10km. It carries a huge amount of silt, the common depositions of which make the river change its course often.

This width and instability have earned the Brahmaputra its name of ‘a moving ocean’. Press the play button to see the timelapse.

Extremely high annual rainfall, ranging from 248cm to 635cm, is common to the northeast region of Brahmaputra. Because of its flat gradient, the excess water from the Brahmaputra overflows onto the riverbanks, causing floods.

This reiterates that the floods, like an annual guest, will visit every year. But, like bad hosts, we seem unprepared. What has caused such miscalculation and misprioritization in dealing with floods? A few of the answers lie peeking through the history of India’s flood management, that altered communities’ relationship with the region’s frequent floodwaters.

According to the Brahmaputra Board — a statutory body set under the Ministry of Irrigation (now renamed as Ministry of Jal Shakti) in 1980 — as compared to the other north-eastern states Assam has the greatest number of schemes (141), and the highest amount of fund released (Rs 1202 crores) at the beginning of XI Plan up to 2018-19 (see graph below). With policies and funding in place, why are we still struggling?

The gap, it is suggested, is in the lopsided approach to flood management. At present, the undeterred focus has been on ‘structural’, or engineering solutions like upgrading dykes, constructing new embankments, construction of sluices and pro- siltation measures etc.

“Whenever there is a flood in the basin, the government takes a reactive stance,” Sayanangshu, a Research Assistant with Observer Research Foundation told The Bastion. “Proactive stands, that require adopting hard measures, like flood plain zoning, are often ignored.”

The root of this ‘reactive’ stance, can be traced back to the bureaucracy-centric colonial laws, a trend that has continued to the present where all resource management is seen to be the government’s business.

With British rule came the push for greater agricultural production. Earlier, well aware of the flooding behaviour of the river, communities left some areas fallow. But, the colonial rule prompted for a push towards cash crops, even in these areas. The embankments, which had no role earlier, suddenly become pivotal to prevent the standing crops from being damaged and an ideal method to control and tame the waters.

But, the problems with such structural methods are well known. Apparently, even to the government. The Annual Report of 2017-18 of Brahmaputra Board mentions “the efficacy of these (short-term) measures especially in the river system of the Brahmaputra, which is highly aggrading/ degrading in different reaches, is also debatable.”

The role of embankments has indeed been debated. “It is only a question of ‘when’ and not ‘if’, that the embankments will fail,” says Thakkar. “And when it breaches, it changes the character of the flood. It is much more destructive, it does not recede, and it brings sand with it.”

Dam construction was another solution prescribed to mitigate floods. And in theory, it should. “But, a dam will only moderate floods, if it is operated with that objective,” comments Thakkar. “In most cases, that is not the case. They are operated on the first instinct of maximising water.” What should be moderating floods has the potential to worsen the situation. Dams first create a false sense of security in the downstream areas, leading to dumping, encroachments etc, which changes the nature of the river and catchment area. Further, the flood water released is also of a different nature—too much, too quick, has very little silt and is mostly water. It worsens the situation in an already flooded downstream area, which is usually the situation of rivers in the northeast by the monsoon.

The trend of such short term, disjointed, piecemeal structural measures have continued, which have not left much space for mitigation. The focus towards non-structural measures like warning systems and flood forecasting started much later, and then never caught up to gaining equal attention.

No longer living with floods

The top-down approach of colonial engineering devalued local wisdom, and subsequently deprived communities of a large part of their everydayness: their day to day associations with their resources. In the Brahmaputra basin, specifically, it altered their relationship with the annual flooding phenomenon. What is now proclaimed as a disaster, was earlier welcomed.

As literature points out, communities before the intervention of colonial rule had their ways of dealing with floods. They planned their cropping pattern factoring in the arrival of floods. Dinesh Mishra in ‘Living With Floods’ writes about metre high Bundhs along Damodar river in West Bengal. Here, paddy growth was timed in such a way that just as the floodwaters would rise, the saplings would be ready for transplantation. When the water gushed into their fields, lower height of the bundhs ensured that only the top layer of water came in, bringing not just nutrient-rich silt, but also fish eggs.

While the silt was beneficial for agricultural productivity, the fish eggs soon turned into carnivorous fingerlings who fed on mosquito larvae. All such methods had no space in the colonial scheme of things. In fact, a push for commercial agriculture shifted the variety of paddy seeds from those which could tolerate 1.2-1.6 metres depth of water, to those that needed sustained dryness.

Shifting economic priorities, harnessing control on resources for their maximization, and leaving communities bereft of their relationship—all accompanied the advent of colonial rule and contributed to the change in the nature of flood management.

“The methods that the government adopts now to mitigate floods, is only extinguishing a fire which they themselves started back then,” says Sayanangshu.

For decades, Brahmaputra has been saying it loud and clear—that the Valley is impossible to flood-proof. Then, continued concentration on structural methods seems to be far from the solution since it furthers the disconnect of communities with flood management. A policy shift is required which would put the community at the centre; not as victims, but as mitigators and managers of the floods. Priorities need to shift. Long term, non-structural measures like participatory management of river valleys, managing the catchment areas, an efficient forecasting system, flood plain zoning and managing embankments rather than constructing new ones have been suggested. These hold the potential to bridge the disconnect with the people, that years of top-down, short term and piecemeal measures have caused.