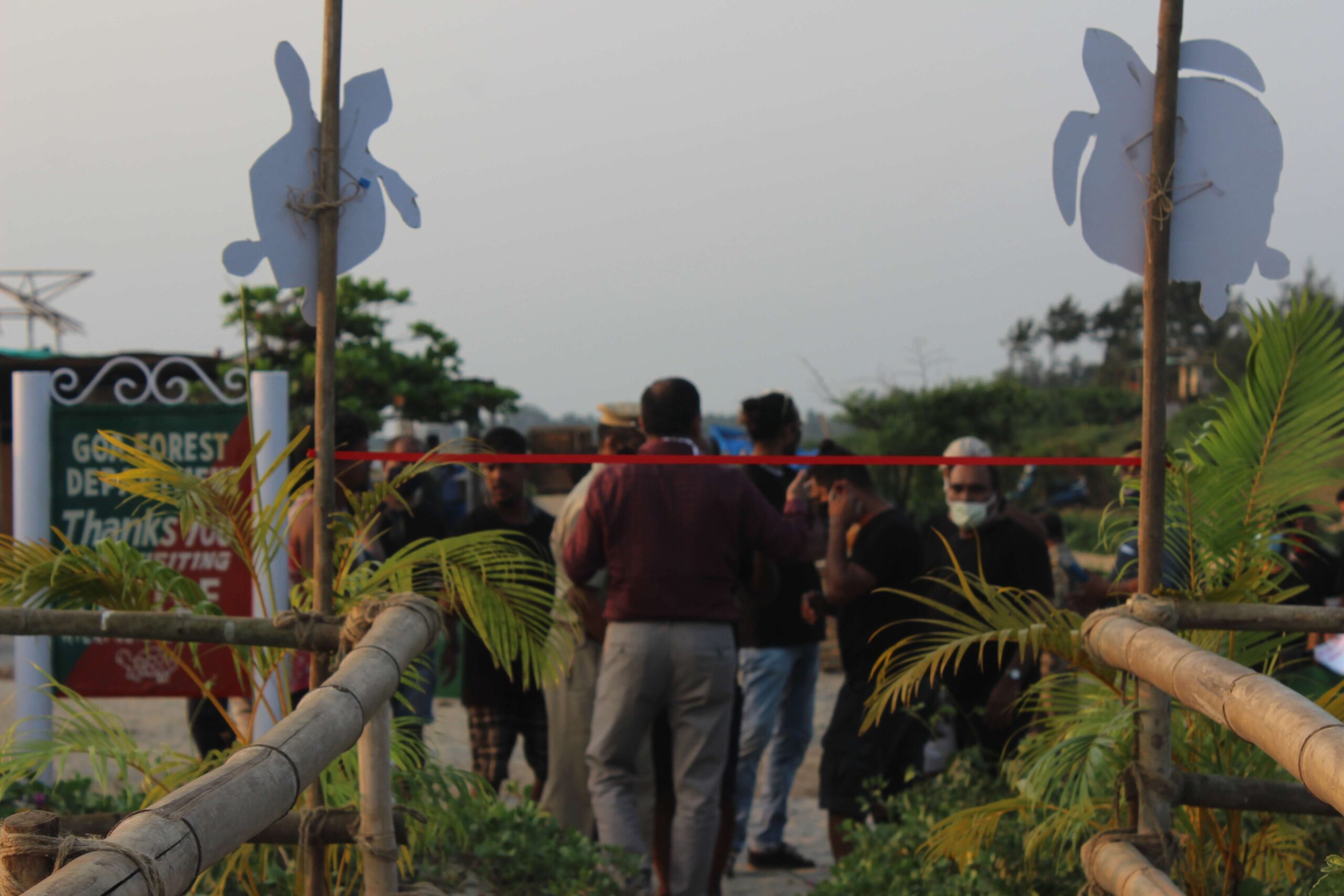 “It was a fairly windy winter evening on Morjim Beach in North Goa. Our team of students and local volunteers donning Olive Ridley T-shirts were preparing for the inauguration of the 2020-21 Goa Sea Turtle Festival to be held on the 1st of December, when all of a sudden, we heard incensed howls, which were followed by raised fingers, and violent warnings forcing us to leave the beach immediately.”

A mob of licensed local shack operators and their employees had gathered around forest officials and researchers, holding boards (right) that depicted a desert star tortoise in protest against the olive ridley sea-turtle program. This was the latest instance of beachfront tourism’s aggression and hostility on Goa’s turtle-nesting beaches.

Whose beach is it anyway?

Goa has a coastline that stretches across 106 km, with about 55% of its shore consisting of healthy wild coasts. These coasts host abundant marine flora and fauna, including olive ridley sea turtles, which are the smallest of the seven species of sea turtles. They are currently classified as ‘Vulnerable’ with a ‘population declining’ under the IUCN’s red list.

Mother ridleys nest on the same beach on which they were born, three to four decades ago. This means that they return to the same habitat every nesting season to lay their eggs. Estimates say that the likelihood of baby hatchlings making it to adulthood range from 1 in 1000 to 1 in 10,000. The biological feature of nesting on their home ground coupled with the low survival rate of hatchlings makes it even more crucial to protect olive ridley nesting beaches.

In Goa, the olive ridley nesting season is between October and May. Olive ridleys (Lepidochelys olivacea) have been known to nest eggs sporadically across five beaches in Goa: Morjim and Mandrem in the north, and Agonda, Talpona and Galgibag in the south. These beaches were notified for protecting and facilitating sea-turtle nesting in the 1990s. But there’s a catch. Among the five notified nesting beaches in Goa, some sections of the beach at Morjim, Mandrem, and Agonda also play host to licensed shacks and structures.

The sea-turtles’ nesting period coincides with Goa’s peak tourism season, which begins after the monsoon in October and runs till the summer month of May. The high tourist density, beach-driving, lights, sounds, plastics, temporary structures and tourist footfall on these three beaches presents a hazard to natural nests, nesting mothers and incubating eggs.

The documentation of the type and degree of conflict towards nesting beaches and other protected areas in Goa is sparse. The IUCN-SSC describes Human-Wildlife Conflict (HWC) as “struggles that emerge when the presence or behaviour of wildlife poses actual or perceived, direct and recurring threat to human interests or needs, leading to disagreements between groups of people and negative impacts on people and/or wildlife”.

Beachfront tourism is premised on the binary notion of coastal tourism – sandy sunbeds and shacks where affordable liquor fuels visitors’ autonomy and freedom on beaches. It is a model that has been well-documented to be unsustainable, not only for the industry itself, but also for the ecological capacity of beaches that host these visitors. Tourist activities based on these models will soon be saturated along these narrow coastal strips.

With a pandemic-induced lull in business over the ten months, clashes between shack owners and sea-turtle conservation organisations have witnessed increasing hostility; this is a clash concerning people’s livelihoods ownership of the beach. “Tourism is our bread and butter”, says Cruz Cardozo, the convener of the Shack Owners Welfare Society (SOWS). “Banning shacks will deny employment to hundreds of youths in these three/four beaches where turtles come to lay eggs.”

A conflict that’s here to stay

Coastal villages in Goa have always oriented themselves towards nesting beaches depending on how nesting-conservation has impacted their livelihoods. Eggs and sea-turtle meat were commonly poached for local consumption and sale before the 2000s; since then, this practice has reduced, partly on account of a few locals’ vigilance in reporting to authorities and their participation in conservation-incentivisation programmes.

Since land-use on nesting beaches has largely been governed by the surrounding villages, the approach to conservation has evolved alongside the tourism model, which saw a boom in the number of shacks, beach structures and beach activities. With the increasing light, sound and noise pollution, the number of turtle nestings has seen a dangerous drop over the past decade.

Researchers have maintained that awareness programmes, dialogue and conflict resolution efforts have had little success with shack owners on these beaches. The owners demand decision-making powers over setting the thresholds for what is permissible under “conservation activities”. The end result is that a small fraction of the beach is available for turtle-nesting (what is known as a guarded hatchery); the majority of Morjim beach, for example, is reserved for tourist activities.

The overlap of turtle nesting season and peak tourism season is set to continue on all five beaches. Recognizing this danger, an NGT order in October 2020 banned temporary or permanent structures within the no-development zone, with strict guidelines on fencing the nesting beaches and banning sunbeds and artificial lights.

So, why the hostility towards sea-turtle conservation?

Theories that navigate sources of such HWC conflict are plenty, and they point to potential solutions for mitigating them. “Wildlife Value Orientations”, or WVOs, is a theory developed by Fulton, Manfredo and Lipscomb (1996). It sees an individual’s understanding of wildlife to be based on their personal beliefs and value systems that were developed over their early years.

Wildlife values orient an individual to look at wildlife through  ‘wildlife use’, where hunting, poaching and/or the use of wildlife for human benefit is justified. Wildlife, in this case, has no rights.‘Wildlife protection’, on the other hand, is a WVO wherein individuals’ value systems condition them towards seeing wildlife to be equally deserving of the same rights as humans enjoy. This justifies conservation and protection against ‘wildlife use’.

Both theories have been useful in understanding people’s preference in wildlife management and effective in understanding an individuals’s outlook towards wildlife. One could argue that rural coastal communities living around nesting beaches in Goa have been displaying a ‘wildlife use’ value within a ‘materialist society’. Communities around nesting beaches prioritise human needs; the use of wildlife habitat and policies must benefit and satisfy their society and family first.

One shack owner from Morjim who we have worked with in previous outreach projects explained that the physical trigger for the aggressions in December was the fact that the turtle outreach centre was set up before shacks were erected on the nesting beach. For an individual with a ‘wildlife protection’ orientation, this would seem unreasonable. However, for an individual or a group of individuals with a ‘wildlife use’ orientation, this trigger over land-use seems justified because the said conservation program did not benefit human beings or local communities first.

Wildlife conservation’s core “deliverable” is the protection of specific species and the maintenance of their ecologically sensitive habitats. Across several species and habitats, community-conservation models have had significant success in reducing poaching, creating alternative nature-based livelihoods and improving key documentation of protection efforts.

Wildlife programmes can directly benefit local communities and create new opportunities for self-sustaining livelihoods. However, in the case of Goa, the objectives of community-led conservation on beaches can become blurry. This is because the tourism model has been singularly moulded around beach tourism and its stakeholders. Villagers’ hostility towards sea-turtle conservationists, researchers, and any form of participatory dialogue jeopardizes programmes that are critical for the survival of the species and its habitat.

A re-orientation of the core values of those in coastal communities is a prerequisite if we are to recognise and live by the notion that no species has exclusive rights over a beach. The government and local governing agents like panchayats are powerful facilitators in the process of shifting wildlife values from ‘human benefit’ to ‘wildlife protection’. At the end of the day, the olive ridley sea-turtles, their tiny offspring, delicate habitats, and biological processes, have every right to be protected alongside human communities. Not as separate from them.

The author is the principal programme co-ordinator and founder of the Morjim Sea Turtle Trust, a public charitable trust working on sea turtle nesting beaches in North and South Goa.